‘I’ve found a place in Croatia I can recommend to ANYONE!’ Adrian Chiles reveals his favourite resort in his mum’s homeland

As my mum’s Croatian I’m often asked for advice about booking a holiday there. I always flinch a little. It’s a big responsibility packing someone off to a destination of my choosing.

What if they don’t like it? Furthermore, if they complain about anything Croatian I’ll be furious with them. This is family, after all.

It’s like sending my children off with another family. It’s a risk. I can’t quite vouch for their behaviour, but I sure as hell don’t want my babies criticised. 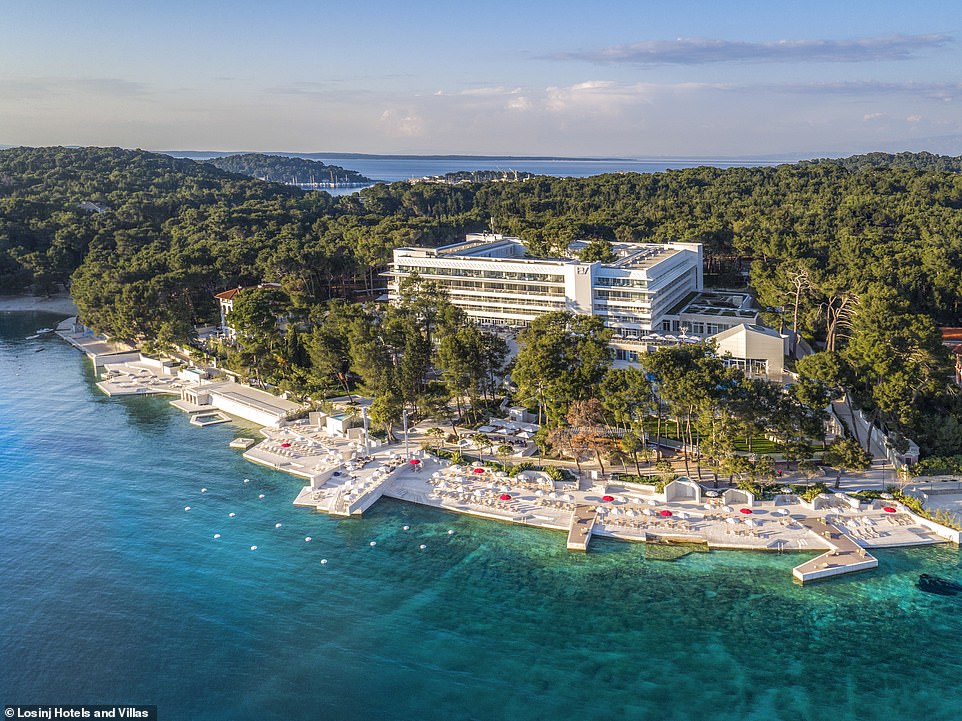 The Hotel Bellevue on the island of Mali Lošinj, which lies in the Adriatic Sea. Broadcaster Adrian Chiles has declared it his favourite spot in Croatia

Now though I have found a place in Croatia I can send anyone to – along with their babies if they wish – with absolute confidence I can say it’ll be everything I might want it to be for them.

The Hotel Bellevue is on the island of Mali Lošinj, overlooking a sheltered bay and the Adriatic Sea. It looks like a section of an art deco-era luxury cruise liner improbably moored in the fringes of a pine forest. Ah, I love the Adriatic. It’s clear and it’s blue and my Mum named me after it. But, I digress.

The Bellevue is a miracle of light and space. I don’t think I’ve come across anything quite like it anywhere in the world, and definitely not in Croatia. There’s a word in my second language that I find most useful. It is gužva. It translates directly as crush, but it is also used to imply trouble.

And it has, until now, been the word I’ve reached for to describe Croatia in July and August. It has invariably been a right old gužva and no mistake. From when I came as a toddler until now in my 50s, it’s always felt like there are too many tourists competing for too little space. 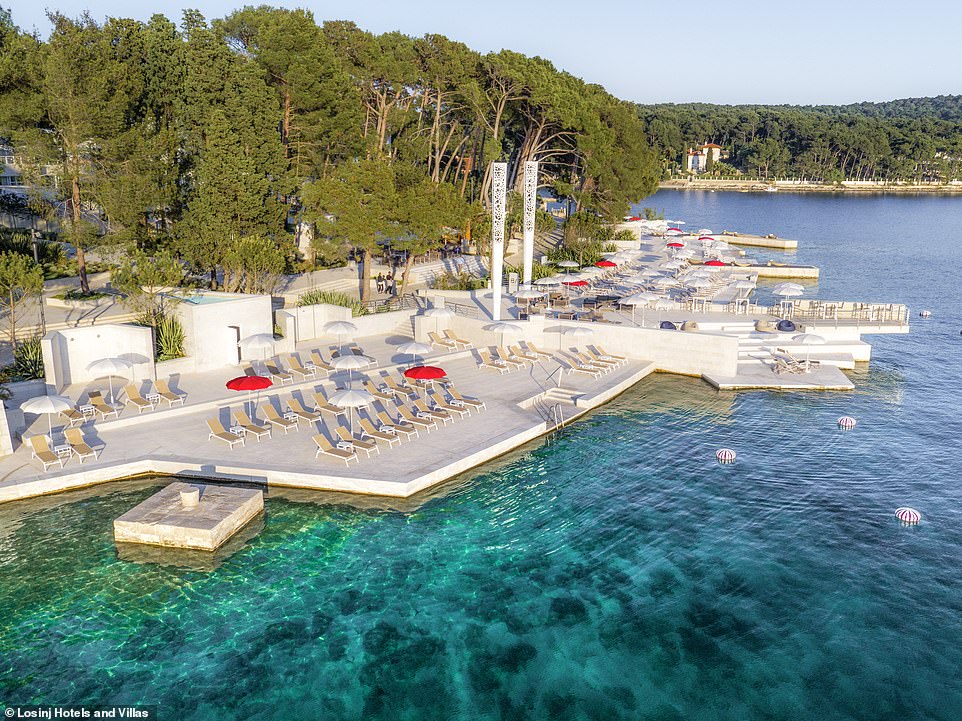 Adrian says: ‘It looks like a section of an art deco-era luxury cruise liner improbably moored in the fringes of a pine forest’

But not at this place. Plate-eyed from surveying the lobby area, wherein there was easily room to stage a couple of badminton matches, I was led blinking out towards the pools and the loungers and, beyond the pine trees, the sea twinkling respectfully away. There was a feel of The Great Gatsby about it all.

The sun screaming off the clean white stonework surely threatened retina damage. I’d left my sunglasses in my bag at reception but, impressed beyond measure, squinting narrowly, I made my way down to the water’s edge.

I found there, what I’d been waiting for all my life. Croatia, you see, with its marvellous coastline and thousand islands, has very few beaches. The Adriatic, as thrillingly blue as it is, generally presents a significant challenge to actually get into. 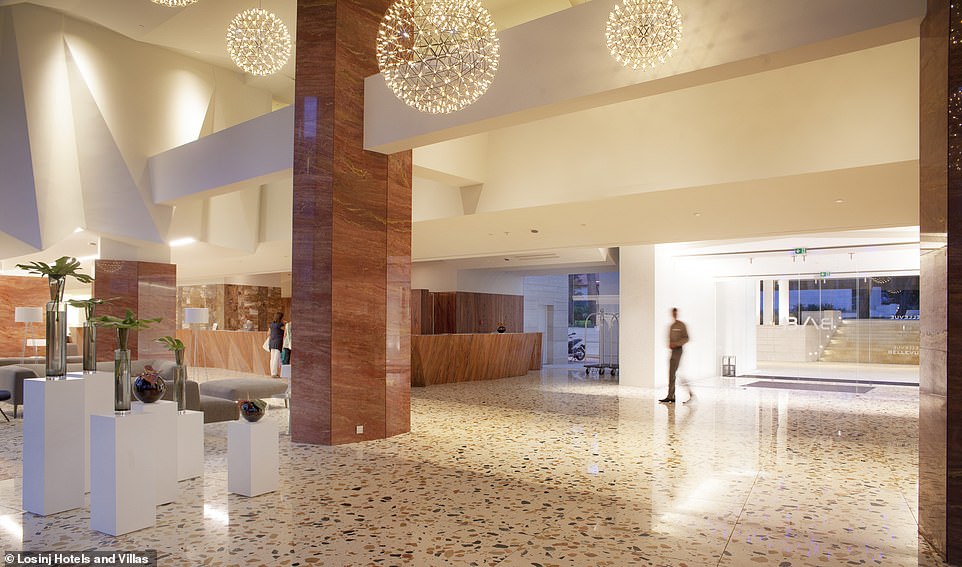 I would say 98 per cent of the seashore is rocky as you like. You may find a flat bit to lie on, and you may even find a geologically convenient arrangement of rocks to jump off, or step into the water, but you’d be among the lucky ones. And then there are the sea urchins everywhere.

Not at this place. Here, fashioned in that glorious flat white stone, there’s a sea-shore you can leap off into that wonderful water. And there are even steps to facilitate easy entry and exit for the less athletic. Sorry to bang on, but anyone reading this who’s holidayed as often as I have in Croatia will be nodding furiously in appreciation.

They might even still feel the faint prickle of where sea urchins’ spines once broke and couldn’t be dislodged many moons before. 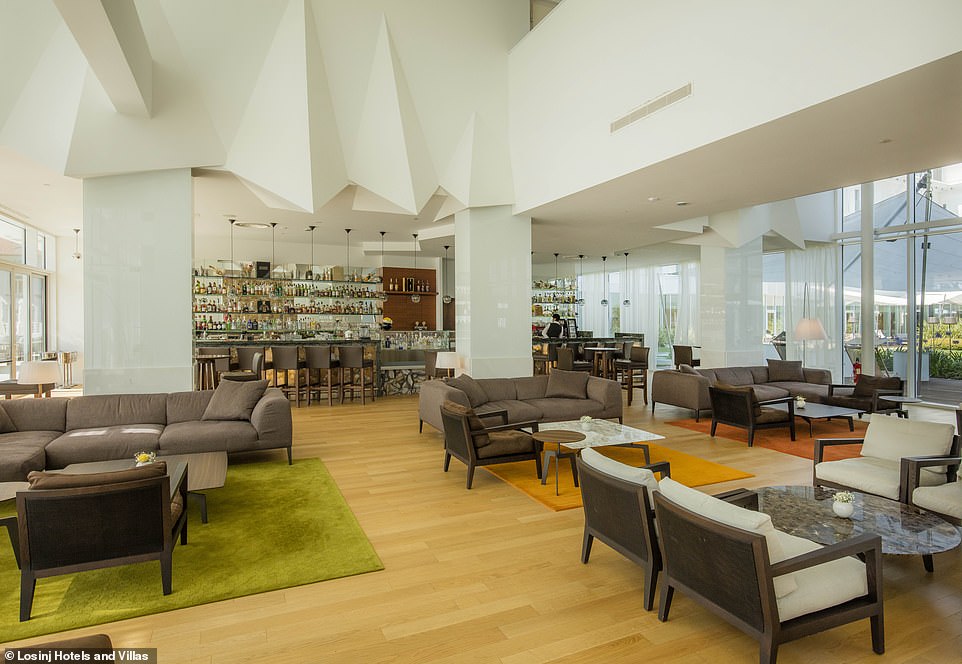 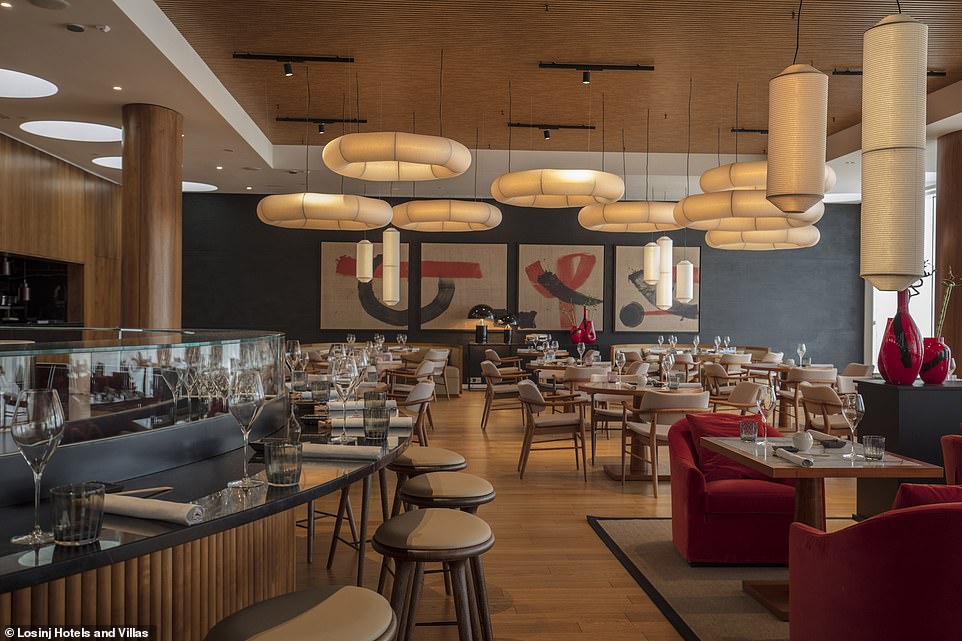 Adrian says: ‘The service manages to achieve that magical blend of super-efficiency untainted by the remotest stuffiness’

So I’ll be returning to the Hotel Bellevue every year for the rest of my life, if only for easy access to my beloved Adriatic. If you need more than that, be assured that you will find it. There are pools, indoor and out, both gently heated and plenty of space to lounge about under pine trees or shades like sails.

You won’t wait long for a young Croatian to make their way over to you take orders for food and drink. The service manages to achieve that magical blend of super-efficiency untainted by the remotest stuffiness. A place this grand hadn’t ought to feel child-friendly but it absolutely manages that too.

The spa is magnificent too, offering a range of things very few of which meant anything to me at all. I’m not really a face mask/scrub/lift/wash type of guy. I did risk a massage though. 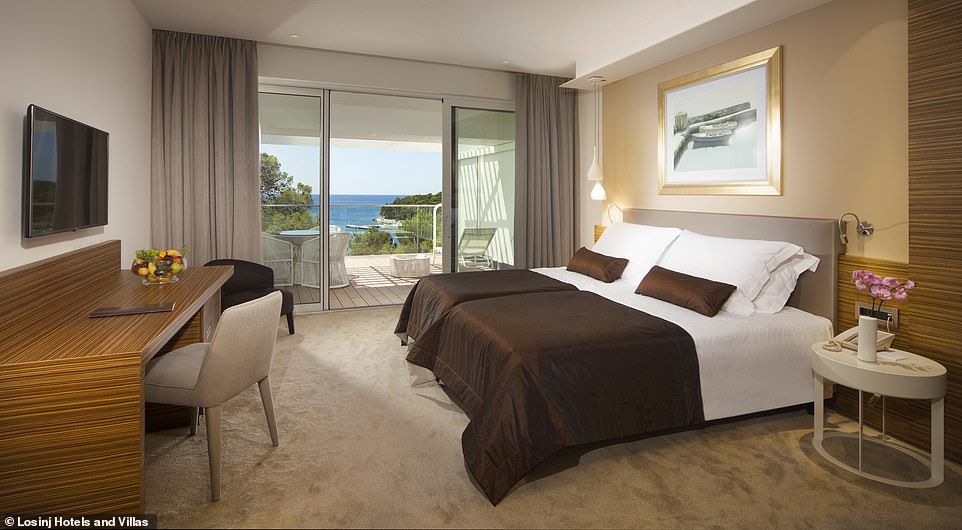 Dreamy: Adrian loved his bedroom (stock image) – and said that ‘it was fitted out very nicely with air con that gently came to life whenever the sliding doors onto the terrace were closed’ 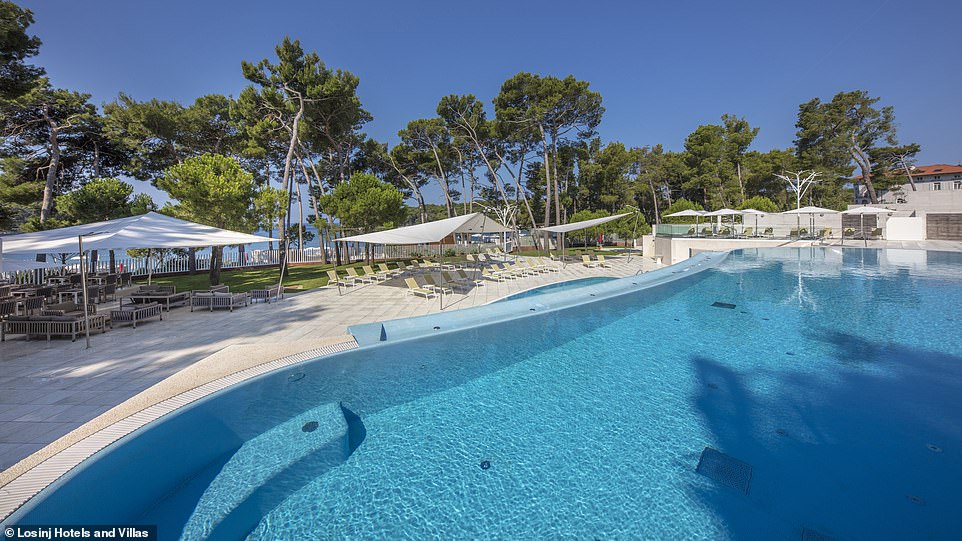 There are pools, indoor and out, both gently heated and plenty of space to lounge about under pine trees or shades like sails, writes Mr Chiles 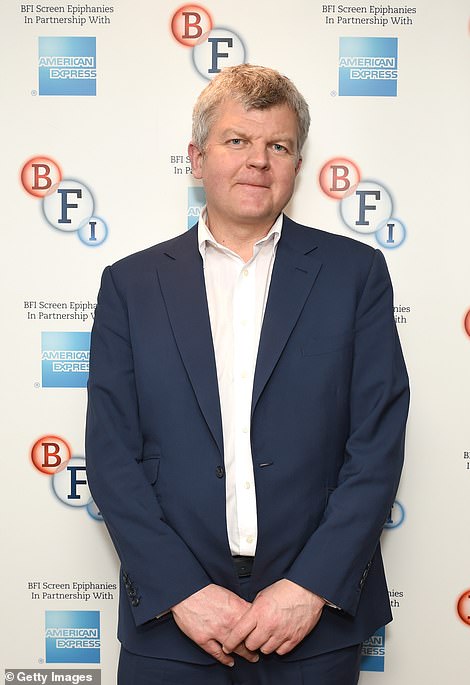 As usual, as I prepared for my rub down, I reflected on the need for some kind of internationally recognised code of conduct for massage table etiquette. The question is, to be in the buff or not to be in the buff. Around the world I’ve been gently mocked for both standing there naked, and for leaving my pants on.

On this occasion, as the Croatian lady held the towel in front of her to protect my modesty, I dropped my swimming shorts.

‘Face down,’ she confirmed from behind the towel.

I mounted the table face down. I was aware of her lowering the towel, and she said, ‘No, other way.’

Confusion reigned. She held the towel up again as I turned onto my back.

‘No,’ she said, more in kindness than exasperation. ‘Face down, head the other end.’

The penny dropped. Up went the towel again. Wanting to bring this excruciating pantomime to a brisk end, lying there on my back with my head at the wrong end, I attempted a kind of break dance manoeuvre to spin myself round.

In doing so my feet got snagged in the towel she was holding, snapping it out of her hands and giving the poor woman a brief and I’m sure unwanted sight of my reproductive organs. 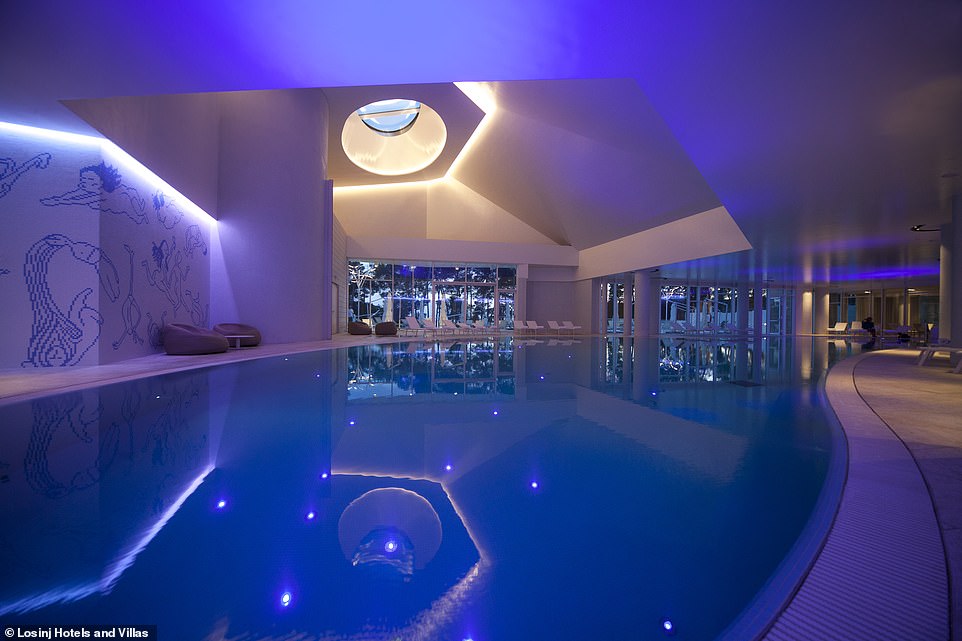 The spa offers a range of treatments. Adrian went for a massage, but managed to snag his foot on a towel being held up by the masseuse and believes she may have caught sight of his reproductive organs

Deeply ashamed and full of apologies I turned over, finally now the right way round and right way up. I plunged my head as deep as it’d go into the hole in the table and resolved to pretend none of the above had happened.

It was a very good massage, which given what she’d been through was a great credit to the woman involved.

A word on the food, and the rooms: both are everything you might want.

Breakfasts were monumentally satisfying and in the evening the range of restaurants will tick every box. There was even plenty for this Croatian vegetarian – a rare breed indeed.

Again the service was friendly and attentive, though having all the waiters wearing white gloves seemed a mite over the top. After too much red wine I woozily wondered if I might have stumbled into some kind of training camp for budding snooker referees. 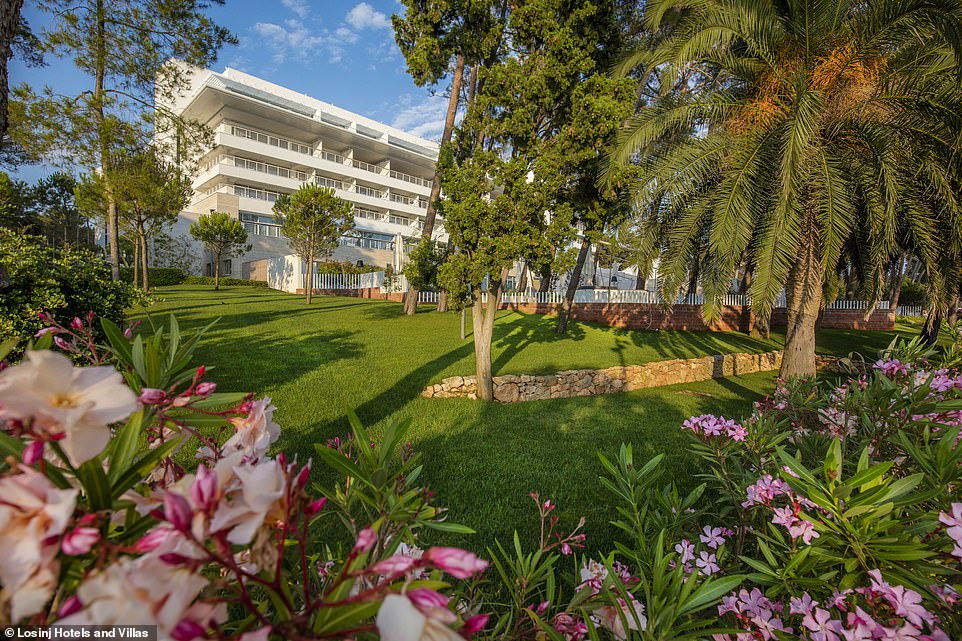 Adrian says: ‘The Bellevue is a miracle of light and space. I don’t think I’ve come across anything quite like it anywhere in the world, and definitely not in Croatia’

If all the luxury proves too much for you, by the way, the decidedly lovely town of Mali Lošinj is a short walk away. There you can feast on enormous pizzas brought to your table by barehanded waiters.

Back in the Bellevue my bedroom wasn’t enormous but who’s going to spend much time in their room anyway? It was fitted out very nicely with aircon that gently came to life whenever the sliding doors onto the terrace were closed.

Oh, and if you happen to be super rich the hotel has an enormous villa next door with a private beach, your own chef and butler and lots of other things, all yours for around 11,000 euros a night.

But, in the nicest possible way, why bother when you’ve got perfection priced much more competitively, right next door?

Visit www.losinj-hotels.com for more information. The starting price for Bed and Breakfast (two persons) per day is 204 euros (£178).

Discounts available: 20 per cent discount from January 1, 2019, for reservations made until February 28, 2019. Minimum stay two nights.