Ninety miles north of San Francisco, Mendocino County is just faraway enough to have narrowly escaped the Bay Area’s radical transformation during the tech boom years. In contrast to other formerly quiet Northern California backwaters, Mendocino maintains its rural identity and eccentricities, including its longstanding status as one of the country’s major marijuana-producing regions. Where there is big news, it’s largely culinary. The 30-year-old chef at Elk’s Harbor House Inn was recently named a James Beard award semifinalist for Best Chef in the West. Besides the Harbor House’s eight- to 12-course, $150 per person prix fixe dinners, there are cheesemakers, upstart breweries, exceptional farm stands — notably Fort Bragg’s Nye Ranch and Caspar’s Fortunate Farm — and farm-inspired restaurants, like the long-awaited, soon-to-open Fog Eater Cafe, which began as a farm pop-up, and will serve “California cuisine with a Southern twang.” After years of population stagnation, young people are moving in, or coming home, and committing themselves to Mendocino’s fertile soil and sea. It’s a second wave back-to-the-land movement and a welcome reprieve from the Bay Area’s buzz.

Take Highway 128 through the Anderson Valley, to Hendy Woods State Park, where you can stretch your legs beneath the awe-inspiring giant redwoods or take a dip in the Navarro River. Then, backtrack to Boonville’s Pennyroyal Farm, the sister farmstead to one of Mendocino’s most beloved wineries, Navarro Vineyards. Sample rich goat and sheep milk cheeses, fresh and aged, exceptional pinot noir, and farm-made pickles and preserves. Sit out back, beside a gurgling fountain, and watch sheep meander beneath the vines. In the spring, a farm tour (11 a.m. daily) offers the overwhelming cuteness of nursing lambs and kids.

For dinner, reserve a table at the Boonville Hotel, a former roadhouse that’s now a beautiful, family-owned inn with a wide porch, flickering fireplaces when the weather’s cool, and a seductive patio garden for outdoor dining during the warm months. The restaurant’s new chef, Perry Hoffman, is from Sonoma’s James Beard award-winning SHED and, before that, Napa’s Michelin-starred Étoile. Here, his prix-fixe menus (starting at $58) include lively dishes and unexpected flavor combinations. Imagine mussels with charred cabbage, grapefruit, fennel and seaweed or a whole stuffed quail with artichokes, shiitake mushrooms, bolting kale and brown rice vinegar.

After winding through the redwoods and along the coast, head for the former logging town of Fort Bragg, for some small town night life. The 135-year-old Golden West is a dive bar that was bought in 2015 by a couple who grew up locally and returned after living in Los Angeles. The bar has maintained its vintage character (neon signs, shuffleboard and pool tables, faded black-and-white photos of logging scenes) while upgrading its extensive liquor cabinet and serving excellent cocktails, and has occasional but unexpectedly good live music, as well as a Sunday Bloody Mary bar. Or, for a family-friendly pub in a tucked-away location, seek out Mendocino’s newest brewery, Overtime Brewery, which teams with Nye Ranch in making its exotic seasonal beers, like the “Thistle Dew” artichoke ale or Nye Ranch Cucumber Batch. Take a couple of crowlers — a 32-ounce can filled from the tap and sealed on site — of your favorite beer to go. 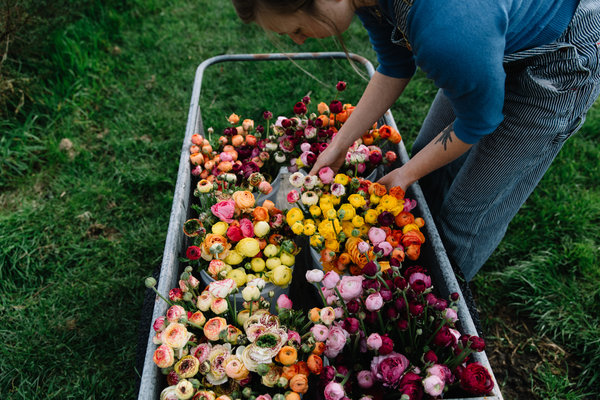 Tucked into a strip mall, Cafe Jaavy — the younger sister of the longtime local favorite, Los Gallitos — has colorful oilcloth tablecloths, a salsa bar and a breakfast menu that includes savory Mexican breakfasts like chilaquiles (tortilla chips simmered in a flavorful, mildly spicy sauce, served with beans and eggs, $9.50) and standout huevos rancheros with chorizo ($9.50), plus sweeter offerings like banana and berry crepes ($8.99) and generous, smoothies ($4.50) made with fresh fruit. The Tropical, with mango, apple, pineapple, melon, chili and lime is particularly tasty. Then, head for the 47-acre Mendocino Coast Botanical Gardens, where 124 species of rhododendrons put on a spectacular show in April and May.

Drive south to Mendocino village to walk its photogenic streets and gawk at the immaculately preserved Victorians. Pop into Frankie’s for a scoop of locally made Cowlick’s ice cream. Among the cafe’s 16 rotating flavors are chai, Campari grapefruit sorbet, yellow cake batter and mushroom. Then, take a restorative soak in Sweetwater Spa’s communal — and clothing optional — eight-person redwood tub, sweat in the cedarwood sauna, or indulge in a massage (starting at $110 for 50 minutes). There are also private tubs ($25 per hour), which are enclosed but open to the sky; if a starry soak is your thing, Sweetwater is open until 9 p.m.

Next door, Cafe Beaujolais’s weekend-only takeout window, the Brickery, serves pizza ($13) with big, perfectly charred air pockets and daring toppings, like Moroccan-spiced rabbit and garlicky New Haven-style white clam pizza. On sunny days, the backyard garden is idyllic for sharing a pie and savoring a glass of rosé or a craft cider.

Fort Bragg’s signature attraction, a former town dump that was transformed by time into a beach of gleaming sea glass, has been badly picked over and is no longer the dazzling sight it once was. For a glimpse of its former glory, head to the odd little International Sea Glass Museum south of town, where Captain Cass sells bags of so-called Seed Glass ($4.50) to replenish the beach’s supply. Across Highway 1, the Glass Fire Gallery displays fantastic blown-glass creations in the form of jellyfish chandeliers and mushroom-shaped table lamps. While in the area, go for a stroll along the newly opened Noyo Headlands Coastal Trail. After more than a century of the headlands being occupied by a sprawling mill site, the town now has access to its coastal bluffs, where California poppies blaze orange in the spring, when it’s also possible to spot migrating whales spouting offshore. 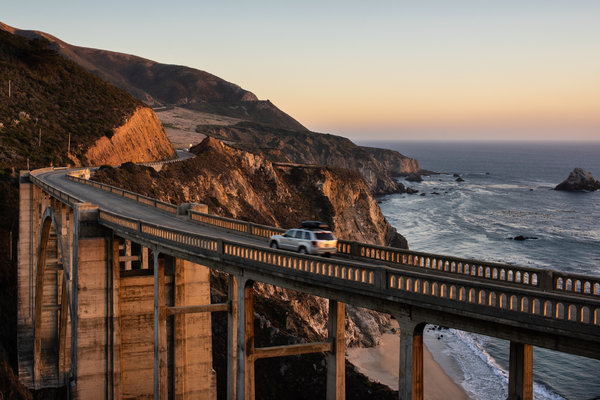 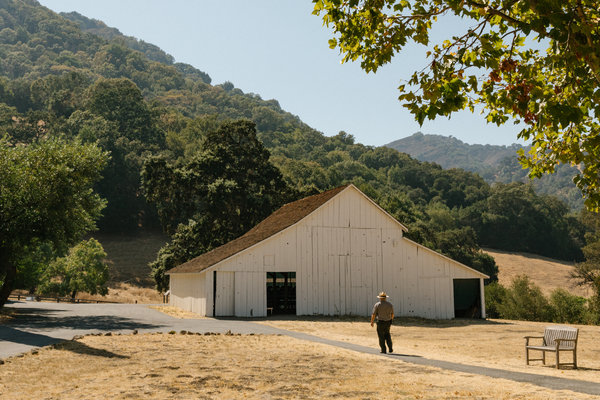 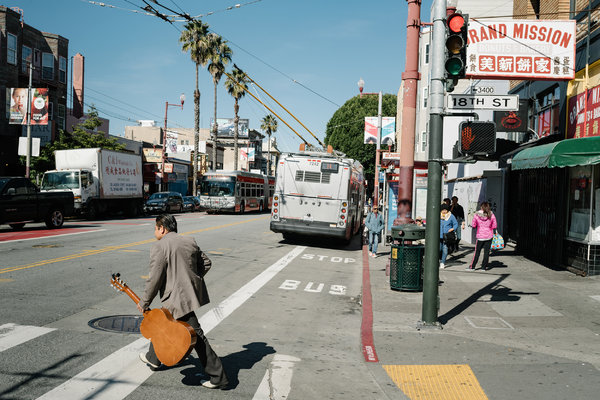 Have an early, California-style dinner by the water in Noyo Harbor, where you have a difficult choice of dining options. For fresh, crispy fish and chips, bundle up and sit on the riverside deck at Sea Pal Cove, where dinner guests include sea gulls, there are $5 pints of high-end craft beer, and views of passing fishing — and, in season, whale-watching — boats. A few doors down, Princess Seafood Market & Deli is a woman-owned and -run fishing operation with its own boat and seafood restaurant. Princess serves reasonably priced, locally caught seafood, including whole Dungeness crab ($27.95), barbecued Royal Miyagi oysters ($12.95 for a half dozen, and a grilled prawn po boy ($15.95). During chilly coastal evenings, the deli’s tented seating area provides heat lamps and freshly laundered blankets. Then, pick up a Coast Packet and take a gamble on a local performance. One of the joys of small town cultural life is the unexpectedness of what’s available from week to week, whether it’s the wonderful independent Flynn Creek Circus or a riotous political play at the Mendocino Theatre Company.

On your way through Mendocino, grab a takeout breakfast — an organic housemade bagel with lox and “all the veggies” ($12.50) or “market-inspired” quiche ($8) — at Mendocino’s Good Life Cafe. Sip your coffee to-go as you drive a breathtaking stretch of Highway 1 to the village of Elk, population 200. Tote your breakfast down to Greenwood State Beach to sit on a piece of driftwood, look out over the volatile Pacific and take a long breath of sea air. Then, visit Elk Greenwood Museum and Visitor Center — originally the town’s post office — to learn some Greenwood lore from the center’s knowledgeable docents.

Take Philo-Greenwood Road back to Anderson Valley and taste your way out of town. The options can be overwhelming, but the redwood tasting room at Toulouse Vineyards and Winery is especially beautiful and its wines are excellent renditions of classic local varietals: Alsatian whites and pinot noirs. For three wineries in one Spanish-style plaza, stop at The Madrones complex, where Drew Family Cellars, Smith-Story Winery and the newly opened Long Meadow Ranch, which has estate-grown Burgundian varietals, share a plaza.

Head south to the City of 10,000 Buddhas, a former California State Mental Hospital that is now a Buddhist community and monastery. The campus’s distinctive arched entrance is undergoing renovation, but its roaming peacocks, evocative institutional architecture and Jyun Kang Vegetarian Restaurant, which serves tasty vegetarian dishes to a mostly local crowd, remain. Or hop down the 101 to Hopland, where Rock Seas serves an ever-changing menu that riffs on brunch classics — like coconut French Toast with star anise, coconut, brown sugar and mango ($12).

In the last two years, two long-awaited new hotels have opened on the Mendocino coast. The Harbor House Inn, in Elk, is a 1916 redwood home which was originally built by the local logging company and designed to showcase the beauty of the region’s lumber. After an eight-year renovation, the inn reopened in May of 2018 with 10 rooms (starting at $355, breakfast included) and a destination restaurant.

Located on a high bank where the Noyo River becomes a harbor, the Noyo Harbor Inn has 15 rooms starting at $199 — nearly all with wide views of the waterfront or the Pacific.

Many of Mendocino’s rustic redwood homes have been converted to vacation rentals in recent years. A mile and a half from Mendocino village, pet- and child-friendly Mendocino Treehouse is not only built of redwood, but the octagonal cottage is built around a living tree. Two bedrooms and two bathrooms, starts at $275.