For 60 years, Mickey Mouse has been the raison d’être for the tourism scene in this sun-drenched Southern California town, home to Disneyland, family-friendly restaurants, affordable chain hotels and sprawling strip malls. But times have changed. Anaheim, with its dry, mild climate, rich immigrant communities and a hearty appetite for both craft beer and sugar-spun treats, is now a bona fide tourism destination. You’ll need a car to explore this city, but parking is plentiful and the streets are easily navigated. With world-class sports and entertainment arenas, a revitalized downtown business district and celebrated, diverse pockets of community life, there’s a wealth of wonders hidden in Anaheim, as long as you know where to look.

California is home to the United States’ largest concentration of Arab-Americans, and in Anaheim’s Little Arabia, a colorful concentration of Middle Eastern businesses, this thriving community is on full display. Halal butcher shops, hookah lounges and specialty clothing stores dot the landscape here, but for a sweet treat, pull over at Le Mirage Pastry. Here, Damascus-raised Maher Nakhal creates mouthwatering custom cakes and Arabic pastries, but the real treasure lies in how he has resurrected his family’s traditional recipe for bouza, a taffy-like Middle Eastern ice cream made stretchy with mastic and orchid flour. Paired with a cup of his thick Turkish coffee, it’s the perfect jolt to kick off your weekend (ice cream, $7.99; Turkish coffee $2.75).

Founders’ Park is small in size but big on history, and an ideal spot to imagine what Anaheim looked like before Disneyland shifted its landscape forever. It houses the 1857 Mother Colony House, built by George Hansen, the German colonist known as the Father of Anaheim, and the Woelke-Stoffel House, a Queen Anne relic that was built in 1894 for John Woelke, another German immigrant who made his way to Anaheim from Chicago, when the city was little more than a collection of orange and lemon groves. You’ll also find the towering Moreton Bay fig tree, which, legend has it, is the same tree that inspired Walt Disney to build the fantastical Swiss Family Tree House two miles away at Disneyland. 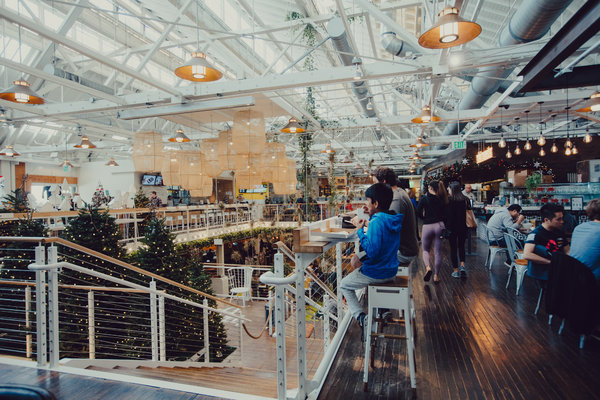 If all that history has worked up your appetite, head to the Anaheim Packing District, a food hall and shopping center anchored by a former Sunkist citrus packing house, now converted into a hipster foodie haven. There’s a dizzying array of options here, including Urbana (Mexican bites and strong cocktails); Adya (rich Indian curries and street food); and Black Sheep GCB (grilled cheese gone wild). Prices vary, but dinner for two is about $30. The Packing House is also home to Anaheim’s only speakeasy, The Blind Rabbit, where creative cocktails and Old-World décor await, if only you can find the front door (drinks around $15).

Locals know the best strategy is to order food to go and then walk over to The Anaheim Brewery, a friendly, no-nonsense ale house with a 100-seat beer garden and deep roots in pre-Prohibition Anaheim. Order the Anaheim 1888, their crisp flagship brew.

Even grown-ups like a little bit of Disneyland magic, which is why The Fifth, a rooftop bar and restaurant with panoramic views of Disneyland and California Adventure, offers just the right mix of after-hours fun. Take your pick of the craft cocktails (the Rooftop Rikki, with gin, simple syrup and fruit infusion, is sweet and powerful, $15), or order a round of alcohol-infused Drunken Donuts ($12). But whatever you do, get there by 9:30 p.m., when the D.J. shuts down his own playlist and syncs up perfectly with the soundtrack for the Disneyland fireworks display, which explodes directly overhead in a fantastic flurry of color.

Anaheim’s downtown district, known locally as CtrCity, features the Center Street Promenade, a strip of local businesses and eateries that has the feel of a friendly village. At Okayama Kobo Bakery & Cafe, a Japanese bakery, there are cloud-fluffy pastries (the red bean bun and baked doughnut are standouts), and strong espresso (pastries $3, espresso $2.50 for a double shot). For those craving a more traditional spread, K&A Cafe, tucked inside the small Good Food Hall down the street, offers excellent eggs, pancakes and corned beef hash (breakfast for two with coffee, around $18).

For those with an appetite for culture but a limited attention span, the tiny Muzeo Museum and Cultural Center, just around the corner from Center Street, makes an ideal stop. This miniature community museum (there is also an art gallery, urban lofts and the historic 1908 Carnegie Library on the campus), features two rotating art exhibitions, as well as one permanent showcase on the city’s history. Browsing is quick, and you’ll be rewarded with everything from ancient Native American tools to memorabilia from Walt Disney himself. (Admission to permanent showcase is free; rotating exhibits around $10).

More than 50 percent of Anaheim’s citizens are Latino, with the vast majority of that population claiming Mexican roots. Within Anaheim itself, there is ample opportunity to sample the bounty of Mexico's culinary culture, including Azules Coffee, where homemade ice cream and pan dulce can be washed down with Mexican-inspired coffee, and local favorite Taco Boy is just across the street. There are also branches of Northgate Market, where you can stock up on a range of sometimes hard-to-find Latin ingredients. A short drive away in the bordering city of Santa Ana, guests can delve deeper into Orange County’s Mexican heritage at El Centro Cultural de Mexico, a community hub for education, art and grass-roots outreach offering a variety of classes; at home in Anaheim, the Grupo Folklorico Monte Alban offers vibrant, high-energy performances that use different zapatedo (footwork) to represent the many regions of Mexico. The group has dancers ranging from age 4 to adult and performs across Southern California.

At Flightdeck, Anaheim’s flight simulation center, anyone over age 11 can be a fighter pilot for the day. The facility has eight simulated fighter jets and a commercial Boeing 737 to choose from, and a cockpit session includes a 30-minute training, 40 minutes in the “air,” and even a flight suit to wear. (Sessions start at $59).

The epicenter of Orange County’s Little Saigon, where nearly 200,000 Vietnamese Americans make up the largest Vietnamese population outside of Vietnam, sits just a few miles southwest of Anaheim, in the towns of Garden Grove, Santa Ana and Fountain Valley. But even in Anaheim proper, there’s plenty of Vietnamese culture to take in. At Urban Banh Mi & Bowls, a family-run sandwich shop in a strip mall, you can taste that culture in the Banh Mi Bac Diet (a baguette filled with pork, liver pate and veggies, both pickled and fresh); fragrant rice bowls with toppings like lemongrass chicken; and refreshing boba teas (lunch for two, $20 with drinks).

Only in Southern California could a real-world sports team be named after a movie, rather than the other way around. The Anaheim Ducks, an N.H.L. hockey club team founded in 1993 by the Walt Disney Company, shortly after the release of the film “Mighty Ducks,” are your quintessential Southern California team. The team clinched the Stanley Cup title in 2007, takes to the ice at Anaheim’s Honda Center, which does double-duty as a music and entertainment arena. On weekend afternoons, it’s a tossup as to what’s playing, but be it singers or skaters, the venue is first-class. The arena sits just adjacent to Angels Stadium, where in warmer months the Los Angeles Angels play home games under the lights of their iconic 230-foot haloed “Big A” sign.

Anaheim’s love of craft beer runs deep. So deep, in fact, that there are at least 15 quality breweries, from the Anaheim Brewery at the Packing District to The Bruery, within the city limits. To really soak up the hop-obsessed culture, follow the postgame crowds to nearby Golden Road Brewing, where revelers spill out from a big, colorful warehouse onto a lawn with twinkling lights; live music plays into the wee hours, and the menu of stouts and lagers is complemented by a full menu, including duck confit poutine, beer can chicken and chocolate olive oil cake (Dinner for two with beers, around $65).

When day breaks, head for the hills — Anaheim Hills, that is. This leafy planned community sits in Anaheim’s eastern corner, and beneath its suburban facade, there’s plenty of character. For a sugar-soaked breakfast you’re sure to remember, take a seat at the kooky Sugar Gone Mad cafe, where the décor is whimsical and the menu (with items like a rich Monte Cristo sandwich, pickled “Easter Eggs” in candy colors, and puffed French toast) pays homage to Disneyland’s Blue Bayou. Save room for the rainbow-hued, sugar-crusted, unicorn-styled desserts (Breakfast for two with coffee, around $40).

Anaheim Hills sits at the foothills of the majestic Santa Ana Mountains, and in 10 minutes, you can drive from the heart of suburbia and be surrounded by nature. The Oak Canyon Nature Center (free) sits on 58 acres within the boundaries of Anaheim Hills and features four miles of hiking trails. It’s a quiet and surprising sanctuary that feels worlds removed from the tourist bustle just a few miles away

Rent a bungalow, apartment or single-family home in Anaheim’s historic Colony district, which has walkable streets and buildings dating back to the turn of the 20th century. A family home that sleeps four or more will run you around $120 a night.

The Anaheim Hotel features a newly renovated lobby with midcentury-modern flair, manicured grounds and friendly staff. The rooms are older and a little sparse on the amenities, but an Olympic-size swimming pool (the largest in the city) and a good on-site restaurant make up the gap (Doubles from $137).

For families traveling together, the Howard Johnson Anaheim, with beautiful arched ceilings in its spacious rooms, free activities for children and an on-site pirate-themed water park, is an excellent bet. Grown-ups will appreciate the separate, quieter Garden Pool, as well as the warm service and easy parking (Doubles from $188).