Zhores A. Medvedev, the Soviet biologist, writer and dissident who was declared insane, confined to a mental institution and stripped of his citizenship in the 1970s after attacking a Stalinist pseudoscience, died on Thursday at his home in London, where he had lived for decades. He had turned 93 the day before.

Dr. Medvedev’s twin brother, the historian Roy Medvedev, told the Russian news media that the cause was a heart attack. He said his family had celebrated Dr. Medvedev’s birthday on Wednesday.

“He had never complained about his heart,” he told RBC, a Russian news agency. “Three ambulances came, but they weren’t able to save him.”

With Roy Medvedev, the physicist Andrei D. Sakharov, the author Aleksandr I. Solzhenitsyn and others, Dr. Medvedev was a central figure in the seething intellectual dissidence that exposed, largely through underground literature known as samizdat, the repression of ideas, science and human rights in the Soviet Union.

Dr. Medvedev played a large role in discrediting the doctrines of Stalin’s director of biology, Trofim D. Lysenko, who was behind a pseudoscience known as Lysenkoism. He also gave the world shocking accounts of the Soviet practice of committing political dissenters to mental instituti, campaigned for greater freedoms for Soviet scientists and writers to study and travel abroad, and exposed a 1957 nuclear disaster in the Urals, one of the worst of the nuclear age.

Dr. Medvedev was an authority on biochemistry, gerontology and molecular evolution and wrote many scientific papers as well as biographies of Soviet leaders and dissidents, and books on the hazards of nuclear power.

A son of a Leningrad State University Marxist philosopher who was arrested in Stalin’s purges in the 1930s and died in Siberia, Dr. Medvedev remained loyal to his country and to the Communist Party. But he fell into disfavor with the Soviet authorities in the 1960s by openly opposing Lysenko in the last years of his reign of power.

For decades, that reign had corrupted Soviet agricultural sciences, contributed to disastrous crop failures and famines after the forced collectivization of farms, and led to the imprisonment, expulsion and deaths of hundreds of his academic and political opponents. 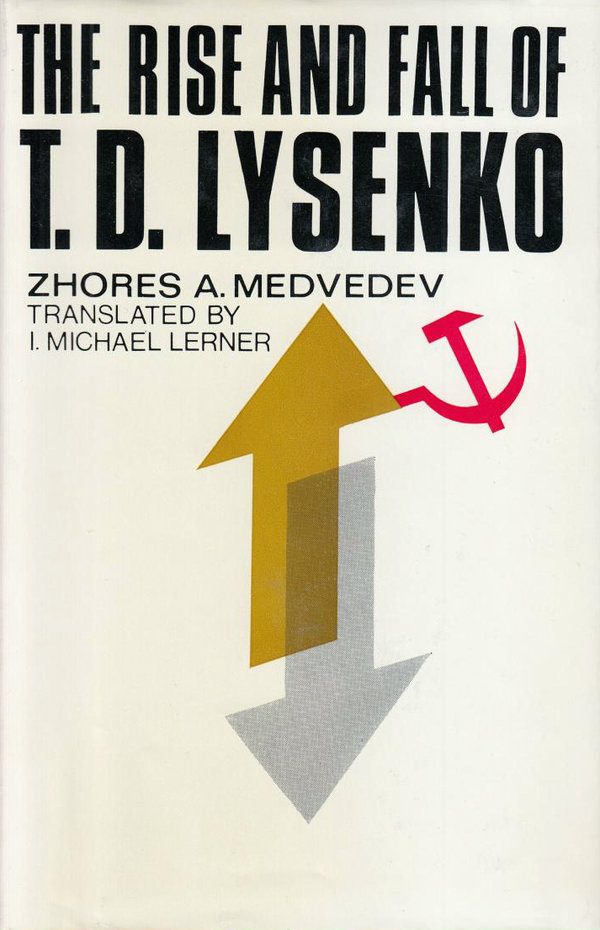 Lysenko, a kind of scientific Rasputin, embraced the hybridization theories of Ivan Michurin and the pre-Darwinian ideas of Jean Baptiste Lamarck, which held that characteristics acquired environmentally by plants and animals could be passed on to the next generation. This was in contrast to the classical laws of genetic inheritance developed by Gregor Mendel in the 19th century and widely accepted as a basis for heredity.

Decades before genetic engineering raised the possibility of rapid generational changes in species, Lysenko’s simplistic ideas catered to Stalin’s obsessive belief that Soviet agriculture could be made to leap forward (or even that Communist Man might emerge) under the proper environmental controls.

Lysenko spent futile years trying to improve strains of wheat by refrigerating seeds over the winter, which he called “vernalization,” and using other techniques of seed preparation, planting and fertilization. By concealing his failures, suppressing academic rivals and pandering to Stalin, Lysenko survived for decades, although his influence began to wane in the 1950s.

Dr. Medvedev, an agrochemist at a Moscow university, believed, as did many of his fellow scientists and intellectuals, that Soviet agriculture had lagged far behind much of the world and that its science had been smothered in political ideology under Lysenko’s influence, which continued after Stalin’s death in 1953 and throughout Premier Nikita S. Khrushchev’s 11 years in the Kremlin.

In 1961, Dr. Medvedev began writing a history of Soviet science that accused Lysenko of “demagoguery and intimidation” and of fomenting “scientific bankruptcy” in the Soviet Union. Although unpublished in his country, the history circulated among underground sources. In 1963, he joined Dr. Sakharov, the father of the Soviet hydrogen bomb, and other scientists in openly attacking Lysenko’s doctrines.

After Khrushchev’s fall from power in 1964, the floodgates of criticism of Lysenko were opened, and by 1965, when Lysenko was removed from his post at the Soviet Academy of Sciences, the Kremlin quietly abandoned his agricultural notions in favor of more modern scientific techniques. Still, criticism of Soviet ideas was not tolerated by the government, which rigorously suppressed books, articles and speech.

In 1969, Dr. Medvedev’s book “The Rise and Fall of T. D. Lysenko,” was published by the Columbia University Press to wide acclaim and international attention. By then, he had published more than 100 scientific papers on the biosynthesis of proteins, heredity and the aging process, and had become a prolific contributor to the underground literature of protest. He had also acquired a growing reputation abroad.

He was invited to speak at conferences in Europe and the United States but repeatedly denied permission to go abroad. His mail was opened and examined. He was followed and sometimes detained by the K.G.B., the state’s secret police. He wrote two articles that circulated in samizdat, one attacking restrictions on scientists seeking to travel abroad, the other on Soviet mail censorship. They were published in London in 1971 under the title “The Medvedev Papers: The Plight of Soviet Science Today.”

Because Dr. Medvedev refused to limit his writings to scientific subjects, the Soviet authorities in 1969 secured his dismissal as head of the department of molecular biology at the Institute of Medical Radiology at the Academy of Medical Sciences in Obninsk, 60 miles southwest of Moscow. 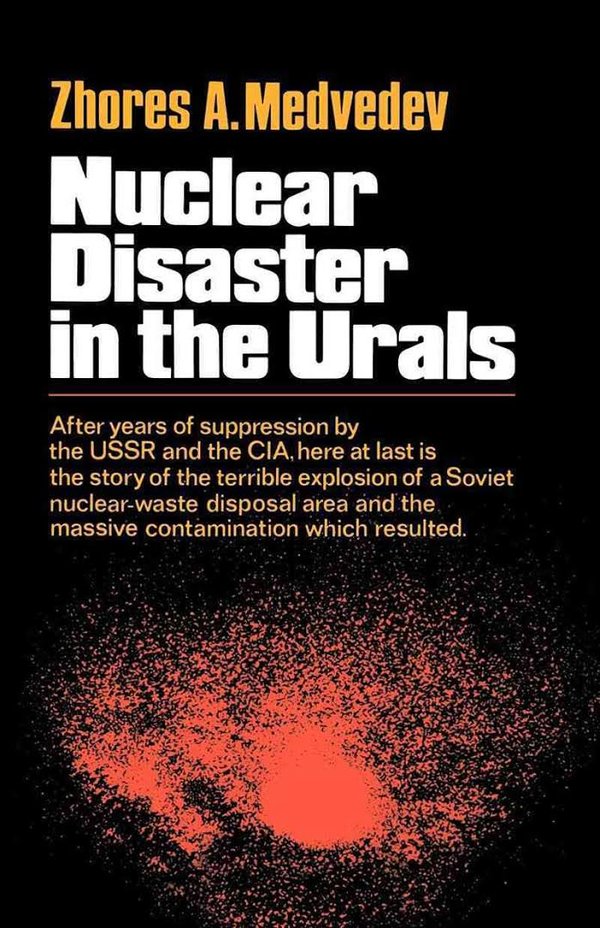 And on May 29, 1970, he was arrested at his home in Obninsk and taken by doctors to a mental hospital in Kaluga, 40 miles away. There he was questioned by five teams of psychiatrists, mainly about his writings, and was pronounced acutely ill with “incipient schizophrenia” and “paranoid delusions of reforming society.”

Dr. Medvedev was confined in a locked ward with several other patients, including two political prisoners and a man with bipolar disorder. Clad in inmate’s clothes, forbidden at times to speak, summoned irregularly before a “commission” for interrogations, he drifted in a Kafkaesque world of bizarre “treatments,” complete with a dreaded Seventh Wing, reserved for dangerous madmen.

A storm of protest ensued, in the Soviet Union and abroad. A letter to the Ministry of Health signed, among others, by Roy Medvedev, Dr. Sakharov and two Nobel laureates in physics, Pyotr Kapitsa and Igor Y. Tamm, called his confinement an act of repression against a man whose sanity was never in doubt.

A passionate attack on the detention was written by Solzhenitsyn. There were telegrams from scientists and intellectuals. On June 17, after 19 days in the asylum, Dr. Medvedev was released.

A book on his ordeal and the struggle for his release, “A Question of Madness,” written by the brothers, was smuggled out and published in London and New York in 1971. It said 250 Soviet citizens were being held in mental asylums for political reasons, and detailed the notorious case of the Soviet biologist Nikolai Vavilov, who was caught in the Lysenko purges of 1941 and died of starvation in prison.

After years of seeing his writings suppressed and being denied permission to travel abroad, Dr. Medvedev was allowed to go to London in 1973 to take a one-year job at the National Institute for Medical Research. He was accompanied by his wife, Margarita, and son, Dimitri. Another son, Aleksandr, remained in a Soviet prison camp, where he had been sent after a brawl among teenagers. Aleksandr was reported to have died later, but the circumstances are unclear.

Soon after arriving in London, Dr. Medvedev was called to the Soviet Embassy, where he was told his Soviet citizenship had been revoked. His passport was seized.

In succeeding years, as the Soviet Union underwent upheavals and dissolution, he remained in London, doing research and writing books on Stalin, Khrushchev and other Soviet leaders, including Yuri V. Andropov and Mikhail S. Gorbachev, and volumes on Solzhenitsyn, nuclear disasters and other subjects.

In England, he worked at the Department of Genetics of the National Institute for Medical Research, studying issues of gerontology, biochemistry and genetics. After retirement, he continued scientific work independently and published several more books.

Son of a Stalin Victim

Zhores Aleksandrovich Medvedev (pronounced ZHAW-ress Alec-SAN-dro-vich Mid-VADE-yeff) and his identical twin, Roy, were born in Tbilisi, in Soviet Georgia, on Nov. 14, 1925. Their father, Aleksandr Romanovich Medvedev, was a Red Army political commissar in the civil war that followed the Russian Revolution in 1917 and later taught at Leningrad State University. During the Stalinist repressions of the 1930s, the father was arrested, tortured and sent to Siberia, where he died. The twins’ mother, Yulia Isaakovna (Reiman) Medvedev, was a cellist from Leningrad.

The boys grew up in Leningrad. While Zhores embarked on biology, Roy became a historian whose books on the Stalin era won world acclaim but were banned at home. In 1950, Zhores graduated from the Timiriasev Academy of Agricultural Sciences in Moscow and received a master’s degree from the Institute of Plant Physiology at the Soviet Academy of Sciences. He earned a doctorate in biochemistry from Timiriasev in 1954.

His innovative research at Timiriasev, where he worked until 1963, led to books that were hailed in academic circles. Among them were “Protein Biosynthesis and Problems of Heredity, Development and Aging” (1963) and “Molecular-Genetic Mechanisms of Development” (1968). He was with the Academy of Medical Sciences at Obninsk from 1963 until his dismissal in 1969.

Dr. Medvedev’s book “Ten Years After ‘One Day in the Life of Ivan Denisovich’ ” (1973) recounted Solzhenitsyn’s struggles to publish the novel in the title, which was about life in Stalin’s prison camps, and it detailed the tactics used by the Communist Party and the secret police to frustrate independent writers.

Dr. Medvedev’s book “Nuclear Disaster in the Urals” (1979) exposed a 1957 explosion of radioactive wastes at a nuclear weapons factory at Kyshtym, about 1,000 miles east of Moscow, that killed hundreds of people, forced the evacuation of thousands and created a radioactive wasteland of 400 square miles.

For years, Soviet officials had denied that such an accident had happened. But in 1989, Tass, the government-controlled Soviet news agency, finally acknowledged the incident, though it insisted that there had been no casualties. Questions had swirled since Dr. Medvedev first mentioned the event in a 1976 article, and his book broke through a fog of confusion by citing more than 100 Russian unpublished studies on the accident’s terrible effects.

In “The Legacy of Chernobyl” (1990), he detailed the 1986 nuclear accident that showered hundreds of thousands with radiation. He condemned the plant’s primitive design and careless management and contended that Kremlin secrecy had made the ensuing economic and political crises worse. His “Soviet Agriculture” (1988) reprised the history of crop disasters, famines and displaced millions, and posed questions on the future of Soviet farming.

Complete information on Dr. Medvedev’s survivors was not immediately available.

At Mr. Gorbachev’s invitation, Dr. Medvedev returned to Moscow in 1989 to testify before legislative panels investigating Chernobyl and the Urals accident. He had testified earlier in Britain in the House of Commons and in the United States Senate, and was flabbergasted by the amateurishness of the Soviet legislators. One wanted to know if his sore throat might be a symptom of radiation poisoning.

“The deputies wanted to speak, rather than ask questions,” Dr. Medvedev recalled, “and much of what they said was irrelevant.”

In 1990, a year before the Soviet Union collapsed, President Gorbachev reinstated Dr. Medvedev’s Soviet citizenship. He accepted, but chose to remain an expatriate in London.