Woman arrives in A&E screaming in agony with stomach and back pain that’s ‘worse than childbirth’ in 999: Critical Condition – before tests reveal she has a rare sphincter condition

A woman is admitted to hospital with agonising stomach and back pains that are ‘worse than childbirth’ in tonight’s episode of 999: Critical Condition.

The patient, identified only as Georgia, was admitted to Royal Stoke University Hospital after experiencing excruciating, unexplained pain.

Cameras followed as doctors carried out tests in a bid to diagnose the problem.

While they failed to find answers during the time the episode was being filmed, further tests carried revealed Georgia was suffering from Sphincter of Oddi dysfunction, a rare condition that results from the inability of the sphincter to contract and relax in a normal fashion.

Georgia, pictured, was rushed to the Royal Stoke University Hospital on 999: Critical condition for shooting back and belly pains. Doctors put her through several tests, but could not determine the cause of her pain. She was eventually diagnosed with a very rare condition 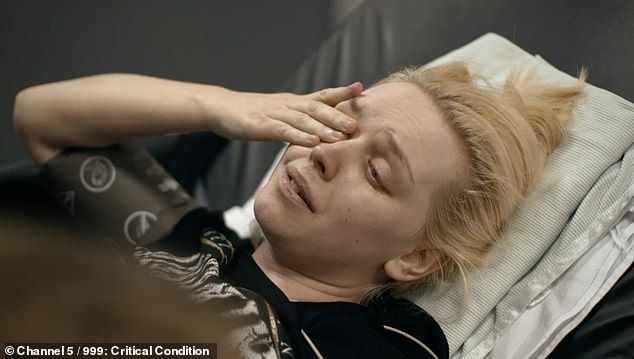 When Georgia arrived in A&E, she was screaming and crying from pain. She could barely talk and was complaining about chest, belly and back pains.

She was treated by dedicated doctor Andrew Bennett, who wanted to make sure her pain did not result from something ‘nasty.’

‘It’s always an anxious moment when you’ve got somebody in such severe pain,’ Dr Bennett told the camera.

He started by examining Georgia, asking her questions about the location of the pain on her body, while taking her pulse.

‘Chest pain, in such age group could be anything from muscular chest pain to something potentially life threatening,’ he told the camera.

‘The things we want to rule out as a matter of certainty is whether she has a collapsed lung, what we called a pneumothorax, air essentially where it shouldn’t be. 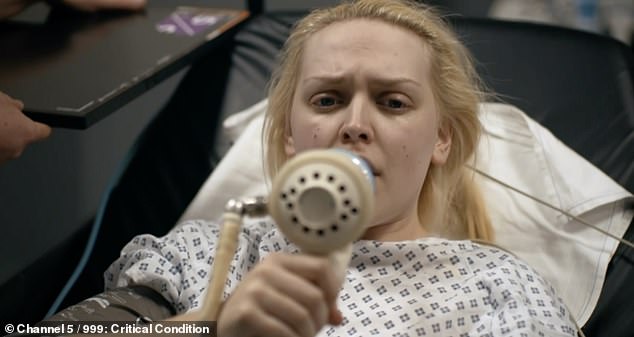 The patient was given medication in order to help with her intense pain, which had left her in tears

‘And the other thing is a possible pulmonary embolism, so a blot clot in the chest, that can make somebody ill very quickly.’

The doctor ordered a chest X-Ray and blood tests to figure out was wrong.

‘Your X-Ray looks fine,’ Dr Bennett told her, ‘there’s no air where there shouldn’t be, there’s no pneumothorax, I’m not too worried about your lungs.

‘So we’re going to do a couple of tests that will tell us about the state and the health of your pancreas as well as the liver itself.’

With the doctor comforting her, Georgia cried: ‘I’m so sorry, I can’t help it,’ before saying she would not have phoned an ambulance if she could have withstood the pain.

But understanding Dr Bennett was quick to reassure her: ‘You need to be here, you’re in the right place.

However, further taste showed no indication there were issues with Georgia’s pancreas or liver, meaning the source of her pain was still a mystery. 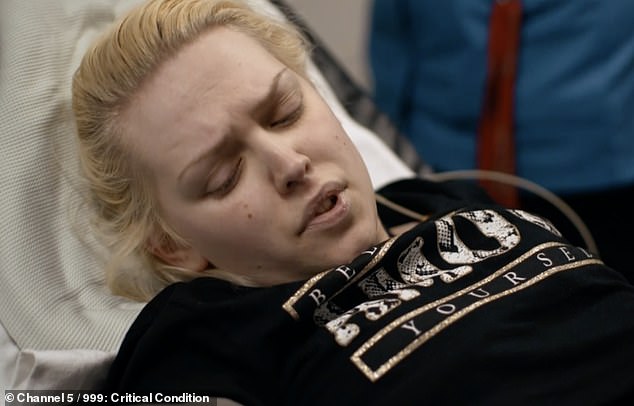 Dr Bennett said he was happy the more serious conditions were excluded from the patient’s diagnosis.

‘We’re finally at that point where we’ve excluded the three or four really nasty things,’ he tells the camera.

With Georgia presenting no sign of a life-threatening condition, she was moved to another service for further testing.

The young woman found after the show she actually suffered from Sphincter of Oddi dysfunction, a condition which is so rare, that it’s often forgotten about, even by doctors.

The condition manifests itself through belly or back pain. It occurs when the Sphincter of Oddi – the flap that regulates the amount of bile and pancreatic juices that get into the duodenum – is not working properly.

The condition is so rare that the number of people who suffer from it is unknown in the UK.  There are very few studies about it as well. What is Sphincter of Oddi Dysfunction?

Sphincter of Oddi dysfunction is a diagnosis that engulfs three types of conditions known as Biliary Sphincter Disorders.

The Sphincter of Oddi acts as a flap between the bile duct and the duodenum.

Its job is to regulate the amount of bile and pancreatic juices that go into the duodenum during digestion.

If the Sphincter does not function correctly, digestion becomes harder, and bile ack up can eventually damage the liver.

This condition is known as Sphincter of Oddi Dysfunction and can cause discomfort and belly aches.

It is a rare condition which is little studied, and the number of its sufferers are unknown.

Each of the three types come with the same symptoms of upper abdominal pain. However, they are not treated the same.