If you have a George R. R. Martin fan in your life, I have found the perfect holiday gift for them: the new Game of Thrones Monopoly. Featuring epic fortresses and castles, a Master of Coin, and six of the most famous families of Westeros, this special collector’s edition of this beloved game board will give fans a chance to compete for their own seat on the Iron Throne.

In partnership with HBO, famed toy company Hasbro is releasing this Game of Thrones Monopoly in Jan. 2019. Like the other themed boards to come before it, this version uses the basic rules and set up of the original game and infuses them with elements from the show. That means you won’t find any boots, thimbles, or top hats on the board, but you will find dragons, lions, and dire wolves.

In this fantastical twist on the classic board games, players can represent their favorite House — Stark, Baratheon, Lannister, Greyjoy, or Tyrell — as they travel through the legendary lands of Westeros buying, selling, and trading locations throughout the Seven Kingdoms. Rather than moving around a typical city with streets like New York Avenue and Park Place, Game of Thrones Monopoly players travel to now iconic locations such as Oldtown, Meeren, and Astapor. In place of the classic paper Monopoly money are Gold Dragon and Silver Stag coins, and in place of the traditional banker is the Master of Coin. Instead of building houses and hotels, players race to complete fortresses and castles across the Seven Kingdoms. In the end, the person to build the biggest empire earns their House a seat on the legendary Iron Throne.

But the mystical creatures and epic family drama aren’t the only things that set this themed version apart from other Monopoly boards. For the first time ever, Hasbro has added a musical element to the classic game in the form of an Iron Throne-shaped card holder that plays the Game of Thrones theme song while you play. Just when you thought the game couldn’t get any more epic, the creators found a new way to make the game even more exciting. 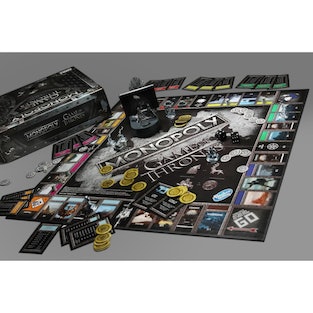 Game of Thrones Monopoly from Hasbro

In this special collector’s edition of Monopoly, players travel across Westeros buying, selling, and trading property throughout the Seven Kingdoms. The winner gets to see their House seated on the Iron Throne.

Fans of HBO’s wildly popular Game of Thrones already have a lot to look forward to in 2019. The show’s eighth and final season returns in April, which means after years of waiting, hoping, wishing, and endless guessing, viewers will finally learn who will become the ruler of Westeros, and how they win their seat on the Iron Throne. But if spring still seems to far away, now they have another opportunity to explore the Seven Kingdoms and compete on behalf of their favorite family in this brand new themed board game. Monopoly may not help them learn how the show ends, but it will help them have fun and pass the time while they wait for what is sure to be an epic final season.

Of course, this is not the first time Hasbro has remixed their classic board game. In addition to Game of Thrones Monopoly, there are several pop culture themed editions including Disney Animation, Stranger Things, Friends, Rugrats, and more than one Star Wars board. There are also multiple editions for children, deluxe versions for serious games, and a new "Cheater’s Edition" for those who can’t seem to play by the rules. There is even a Monopoly for Millennials, in which, true to real life, players cannot buy real estate.

While the new Game of Thrones Monopoly doesn’t hit shelves until January, show fans and board game aficionados can pre-order it from the HBO Shop, Amazon, or wherever board games are sold.