Come on in! Windsor Castle’s magnificent Inner Hall, which was closed to the public by Queen Victoria, finally re-opens to visitors after 150 years

The last time a commoner set foot in the vaulted Inner Hall of Windsor Castle, Queen Victoria was on the throne.

However, mere mortals can now wander the hallowed room in the Queen’s favourite residence, after it was opened up to visitors for the first time in more than 150 years this week.

Created by George IV in the 1820s, the magnificent entrance with its intricate Regency ceiling bosses was used in the early 19th century to welcome heads of state and official guests to the historic royal residence.

However, it was closed off by Queen Victoria in 1866, who built a smaller State Entrance hall, leaving George IV’s space to be used as a store room for decades. 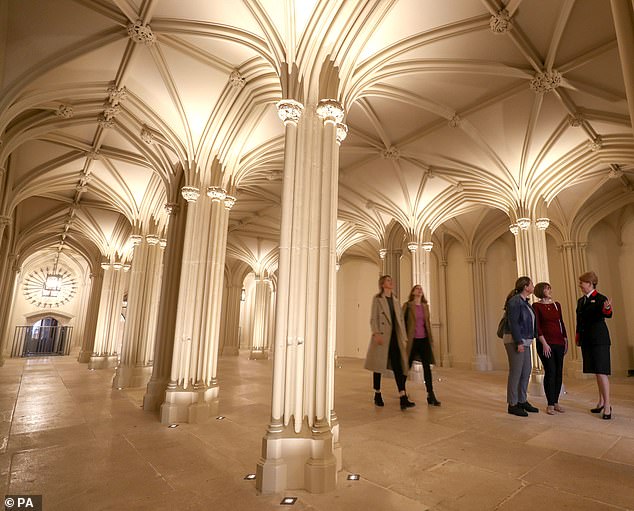 The first visitors enjoy the Regency ceiling of the Inner Hall at Windsor Castle, which has re-opened to the public this week after nearly 150 years 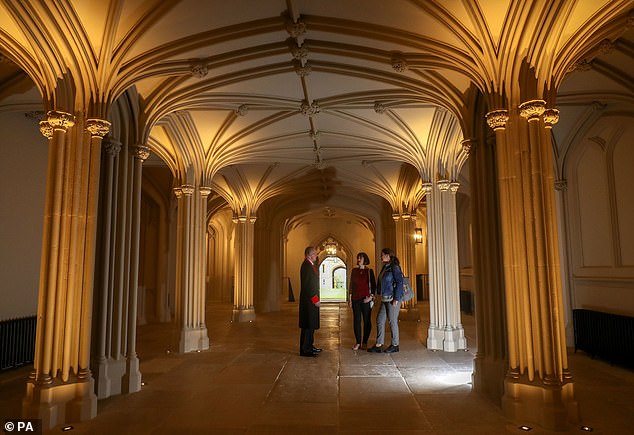 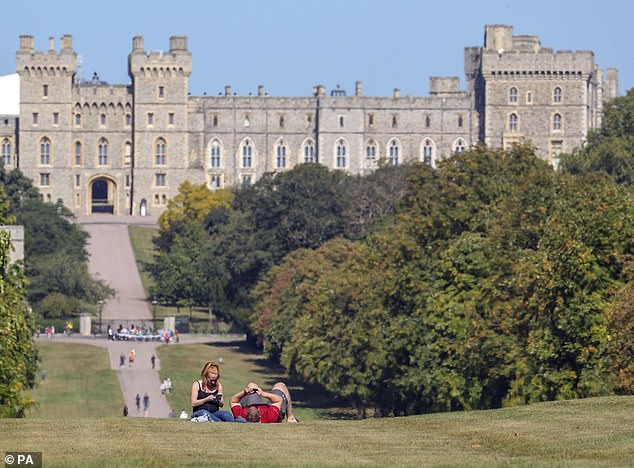 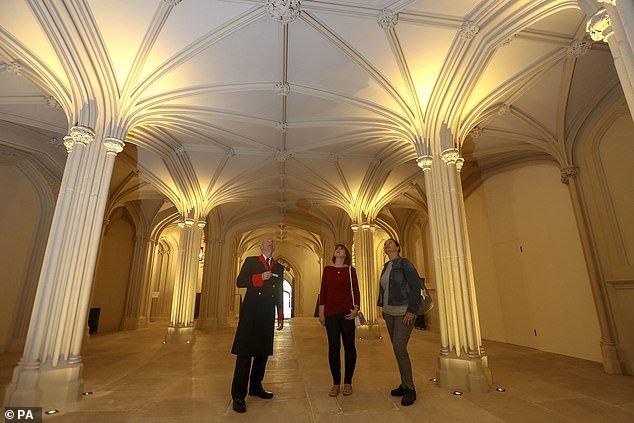 Double treat: Visitors will also, for the first time, be able to take a new route through the State Entrance, which is where the current Queen welcomes visitors to the Castle

Now restored to its original purpose, the hall is one of two new locations at Windsor open to the public.

Visitors will also, for the first time, be able to take a new route through the State Entrance to see where the current Queen greets her visitors.

From there, tourists will be able to enjoy the spectacular view of the two-and-a-half mile Long Walk, created by Charles II in the 1680s.

The changes to the visitor experience are part of the Future Programme of projects funded by the Royal Collection Trust. 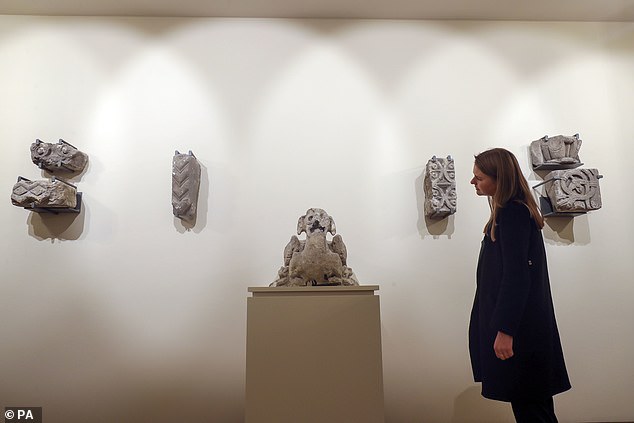 A visitor looks at architectural fragments, found by the architect Jeffery Wyatville during his renovations at Windsor in the 1820s, have gone on display adjacent to the vaulted Inner Hall 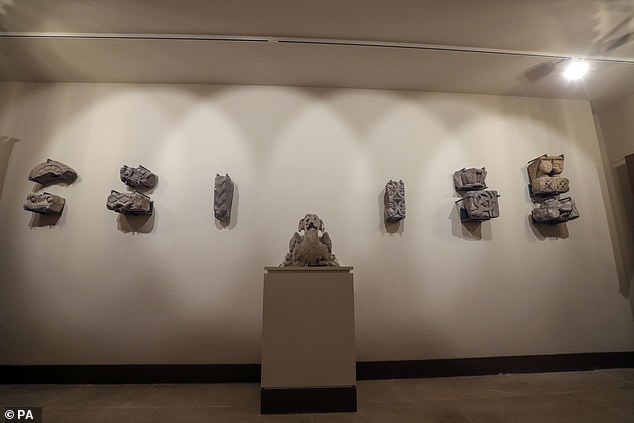 Windsor Castle has long attracted millions of visitors wanting a glimpse inside the royal family’s residence – and after two new openings this week, there’s now more to explore 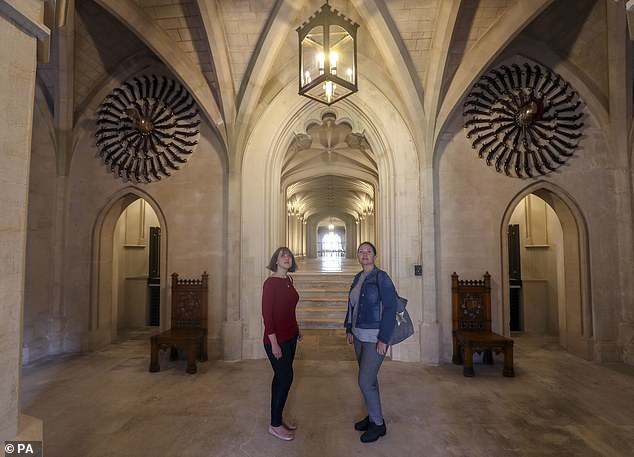 The State Entrance, which was created by Queen Victoria and is still used today by the Queen to welcome official guests 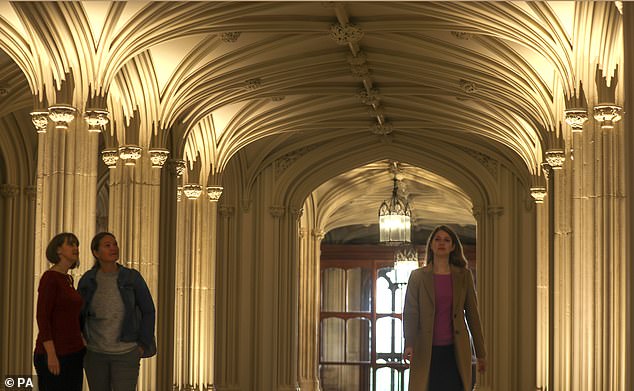 The vaulted hall, used as a storage room for decades, has been cleared and opened to the public 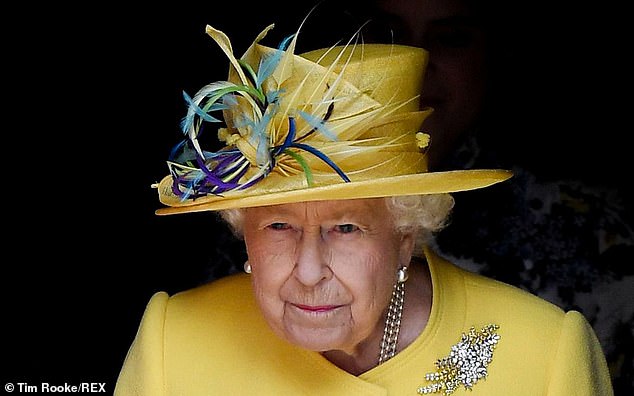 The Queen,  pictured at St George’s Chapel in Windsor in  April this year, spends much of her time at her favoured Windsor home

Layers of paint were removed in the Inner Hall to reveal the ceiling bosses which were the work of Francis Bernasconi, the most fashionable stuccoist of the Regency period, who worked at Windsor during the reigns of both George III and George IV.

The Gothic castle has been the family home of kings and queens for almost 1,000 years.

The Queen, 93, now spends much of her time at Windsor and it is said to be her favourite residence.