William J. Conklin, a versatile architect who in the 1960s helped design the model community of Reston, Va., and oversaw the restoration of the Greek Revival temple that since 1848 has served as Brooklyn’s seat of government, died on Nov. 22 in Mitchellville, Md. He was 95.

His death was confirmed by his nephew David Conklin Denney.

Mr. Conklin was also a principal designer of the United States Navy Memorial, which was dedicated on Pennsylvania Avenue in Washington in 1987.

He also worked with a design team, headed by the distinguished architect Wallace K. Harrison, that proposed the creation of a residential community, coupled with retail and office space, on landfill off Lower Manhattan. The concept was revised by Alex Cooper and Stanton Eckstut and led to Battery Park City on the Hudson River. 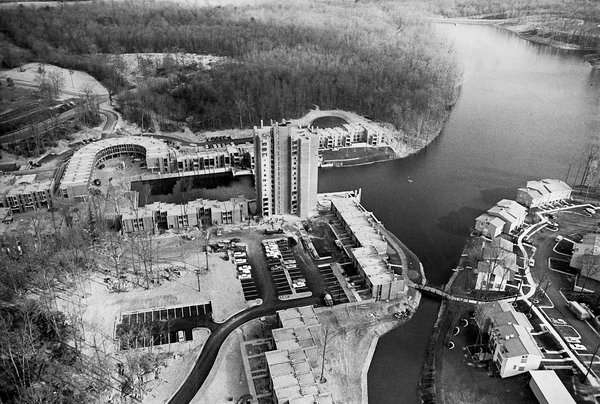 Mr. Conklin and his collaborators, principally his longtime partner, James Rossant, were acclaimed for integrating modern structures into low-rise Manhattan blocks. These include the Butterfield House, a seven-story brown-brick and glass apartment building completed in 1962 at 37 West 12th Street in Greenwich Village; The Premier, a 13-floor apartment building with a townhouse-style base at 333 East 69th Street (built in 1963); and the seven-story aluminum Ramaz School (1981), accommodating its upper grades at 60 East 78th Street.

As the architect behind the reclamation of Brooklyn Borough Hall in the late 1980s, Mr. Conklin brought “intelligence and affection” to the project, wrote Paul Goldberger, the New York Times architecture critic at the time.

“New York City is not always an architectural client with the vision and the commitment to give difficult projects their due,” Mr. Goldberger added, “but this time it could not have done better.”

Mr. Conklin, an acolyte of the pioneering modernist architect Walter Gropius at Harvard and later a scholar of Incan textiles, worked mostly Mr. Rossant, and their influence extended well beyond individual buildings.

The two were recruited by the developer Robert E. Simon Jr. to plan Reston, the self-contained community for 75,000 people in suburban Fairfax County, about 20 miles west of Washington. Founded in 1964, Reston was the sort of “new town” evoked by Clarence Stein’s Sunnyside Gardens in Queens.

In Reston, Mr. Conklin and Mr. Rossant designed the core of Lake Anne Village Center, which, when it opened in 1965, was the first of the community’s hubs — a mix of high- and low-rise residential buildings and stores beside an artificial lake in what was viewed as an innovative response to humdrum suburban sprawl.

The two men started their own firm, Conklin & Rossant, in 1967 and remained partners until 1995. Their other projects included the 30-story Two Charles Center, which opened in 1969 as the tallest residential tower in Baltimore, and the playful, and fleeting, painting of the pedestrian bridge from East Harlem to Wards Island in the East River in purple, yellow and red. (It is now municipal green.)

William J. Conklin was born on May 2, 1923, in Hubbell, Neb., a village with fewer than 100 people, near the Kansas border. His father, J. E. Conklin, was a bank president and later a state legislator. His mother, Wilhelmina (Barrett) Conklin, was a vice president of the bank. (The “J” in the names of father and son didn’t stand for anything.)

After graduating from Phillips Exeter Academy in New Hampshire, Mr. Conklin earned a bachelor’s degree in chemistry from Doane College (now Doane University) in Crete, Neb. Skipping commencement ceremonies, he joined the Navy and was sent to Japan as an electronics technician to monitor signals from the atomic bombing of Hiroshima and Nagasaki.

After the war, a school counselor suggested that he combine his interests in math, physics engineering and art (his father had designed what Mr. Conklin described as the “post-modernish” facade of his own bank) by studying architecture. He earned a master of architecture degree from the Harvard University Graduate School of Design in 1950.

He married Barbara Mallon, who became a curator at the American Museum of Natural History in New York. She survives him, along with their son, Chris. Mr. Rossant died in 2009.

Mr. Conklin was a vice chairman of the Landmarks Preservation Commission in New York City in the early 1980s and president of the New York chapter of the American Institute of Architects.

He was captivated by Incan textiles after he visited Machu Picchu in Peru, an interest he also traced to his grandmother’s quilting. He wrote dozens of papers and books on the subject, focusing on quipu, the ancient practice of recording information with knotted strings.

The design for the Navy Memorial — a circular plaza featuring a granite world map flanked by fountains, pools, flagpole masts and sculptured depictions of naval victories — was the culmination of Mr. Conklin’s role as the urban planner for what became known as Penn Quarter, a once-shabby section of Pennsylvania Avenue that had been a national embarrassment during presidential Inaugural parades.

Senator Daniel P. Moynihan, Democrat of New York, had been pivotal in the transformation of the area into a prototype for a planned urban community, mixing residences, office buildings and cultural and historical sites.

In November 2008, Mr. Conklin wrote President-elect Barack Obama, suggesting that during his Inaugural parade he leave his limousine when he reached the spot in Penn Quarter between the Navy Memorial and the National Archives Building and walk for a few blocks.

“This momentary action on your part could express your admiration of (and support for) the Founding American Documents, and also perhaps show your appreciation of the military,” Mr. Conklin wrote.

It’s uncertain whether the message was delivered, but President and Michelle Obama did just that on Inauguration Day as the Conklins looked on. They, joined by journalism students from Doane University, were watching from the balcony of their apartment in a building Mr. Conklin had conceived as a semicircular backdrop for the Navy Memorial.