Shortly after Bebe Neuwirth and Brandon Victor Dixon announced the nominees for the 2019 Tony Awards on Tuesday morning, Ben Brantley and Jesse Green, chief theater critics for The New York Times, took a first look at the results. Were they mad as hell, à la Howard Beale of “Network”? Or were they singing “Oh, What a Beautiful Mornin’” in honor of “Oklahoma!”?

BEN BRANTLEY Good morning, Jesse. Having watched the nominations, I’m reeling from one startling omission: “To Kill a Mockingbird” is not in the running for best play. And I had my (virtual) money on it to win. (Psst — Peter, who’s doing the office pool — is it too late to rejuggle my choices?) What do you think happened?

JESSE GREEN This was an odd year, with many different kinds of shows in different styles and with different provenances. Some chaotic crosswinds are inevitable when 34 one-of-a-kind productions are considered by 48 nominators. And “Mockingbird” may have been penalized for some of the legal fights it got mired in: with the Harper Lee estate and with the licensers of a different adaptation. But I think the main reason it wasn’t recognized in the best play category is that even though it has been totally rewritten, by Aaron Sorkin, it is not fundamentally a new work. (That’s part of why it’s a hit.) Likewise “Network.” Their spot seems to have been taken by “Gary: A Sequel to Titus Andronicus,” despite its being highly divisive and surely the oddest bird on Broadway. I wasn’t displeased by that.

[“Hadestown” and “The Ferryman” get Tonys love | Here’s a complete list of nominees.]

BRANTLEY Maybe this will be the year of the rara avis. The nominators seemed to favor something new over something borrowed, for once. “Gary,” “What the Constitution Means to Me” and, in musicals, the love shown to the radically reconceived “Oklahoma!” and the myth-inspired “Hadestown” — this suggests a willingness to embrace departures from the norm. Very healthy, I’d say. 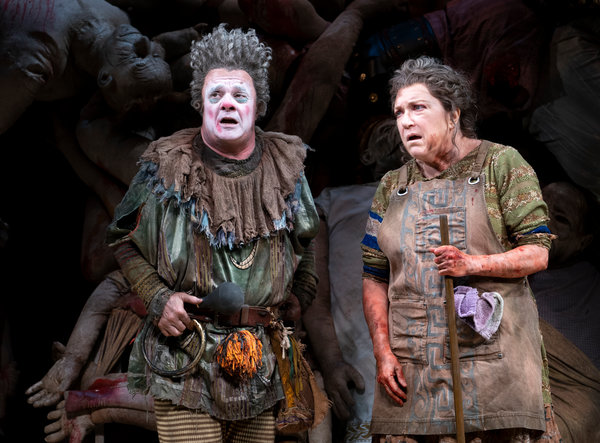 GREEN Aside from “Hadestown,” the nominations for new musicals were more conventional. “Ain’t Too Proud: The Life and Times of the Temptations,” “The Prom” and “Tootsie” cleaned up. Were you surprised not to see more love for “Be More Chill” and “The Cher Show”?

BRANTLEY “Be More Chill” would have required a body of much younger nominators to score big this year. The other shock for me was the near shutout of “King Lear.” (Ruth Wilson was acknowledged for her doubling as the Fool and Cordelia.) Glenda Jackson seemed like a guaranteed nominee, if only for memorizing all those lines at the age of 82. And it was an admirable performance. Maybe it’s because she won last year (for “Three Tall Women”), or maybe people just didn’t like Sam Gold’s obstructive staging of Shakespeare.

GREEN I rarely think in terms of snubs, but that did seem like one. Back in musicals, I was surprised that Rebecca Naomi Jones was not nominated for her troubled Laurey in “Oklahoma!” But it was a crowded category and the fifth spot seems to have gone to Caitlin Kinnunen, the feel-good lesbian of “The Prom.”

BRANTLEY I know some theatergoers missed the soaring soprano of more traditional Laureys. But I agree, it was a deeply felt and original interpretation of a classic character by Ms. Jones. I was glad, though, to see “The Prom” strutting so proudly through the lists. It’s the most conventional of the nominees for best musical (even more than “Tootsie,” which had David Yazbek’s urban-neurotic score), but it did the old steps so very well — and in a new, socially conscious context.

GREEN Also notable were Jeremy Pope’s two performing nominations, one for a play (“Choir Boy”) and one for a musical (“Ain’t Too Proud”). But in terms of direction and writing, this was an extremely nondiverse year on Broadway; something like 85 percent of the artists eligible in those categories were white men. It was nice to see the nominators reaching out to recognize Camille A. Brown’s fantastic choreography for “Choir Boy” — a play; the category is usually stocked with musicals only.

BRANTLEY I, too, was struck by the homogeneity of the nominations. All the more reason to celebrate Rachel Chavkin (the director of “Hadestown”) and Heidi Schreck (the writer and star of “What the Constitution Means to Me”). I was also pleased to find the name of the excellent playwright Dominique Morisseau, who did very well within the confines of the jukebox format, for her book for “Ain’t Too Proud.” And it was good to see that Tarell Alvin McCraney’s “Choir Boy” was remembered.

GREEN That said, I think the best play contest is going to come down to “What the Constitution Means to Me” and “The Ferryman” (with maybe a bit of “Ink” spilled too). Which sets us up for our own big contest. I found “Constitution” to be the best and most important new play of the season. (Heidi Schreck was nominated as both its author and leading actress.) I’m pretty sure you disagree, though you liked it — as I liked “The Ferryman.”

BRANTLEY Well, that’s an argument for another day. (Plug: See our dialogue in the upcoming Arts & Leisure Tonys issue on May 19.) I can certainly understand how you might feel “Constitution” is the most important, in terms of creating an immediate conversation with the audience about an extremely topical issue. Speaking of topical, no best play nomination for “Hillary and Clinton,” I see.

GREEN Nor for its director, Joe Mantello. My sense is that people see the play (by Lucas Hnath) and the production as some kind of found object, not the result of artists working.

BRANTLEY It’s more than that, although I did feel Hnath’s script, though very clever, didn’t take me anywhere I hadn’t expected to go. On the other hand, Mantello’s supremely inventive staging did. So did the performances by perennial nominee Laurie Metcalf (as Hillary) and non-nominee John Lithgow, whose Bill Clinton was a disarmingly fresh take on a very, very famous person, without the pandering ickiness of impersonation.

GREEN Which I suppose brings us to the hairy ape in the room: “King Kong.” For all that money it garnered just three nominations (all for design) and a special noncompetitive Tony for the puppet.

BRANTLEY That was some puppet, you have to admit. Do you think the Tonys should initiate some new categories?

GREEN Projection design, when it’s honored, is bundled with one of the other design categories, but it’s going to need its own slot soon. This season, “Network,” “Ink,” “King Kong,” “Beetlejuice” and “Be More Chill” might all have been nominated.

BRANTLEY And what about a special acting category for best performance by an actor or actress as a living person? We had a lot of those this year: Bertie Carvel as Rupert Murdoch, the various Chers, the Clintons.

BRANTLEY The Last Temptation. Sounds like a title that mighta been a contender — and a lovely musical phrase to go out on.