Last month, he announced he will hold it early to avoid clashing with the final Brexit negotiations in November. 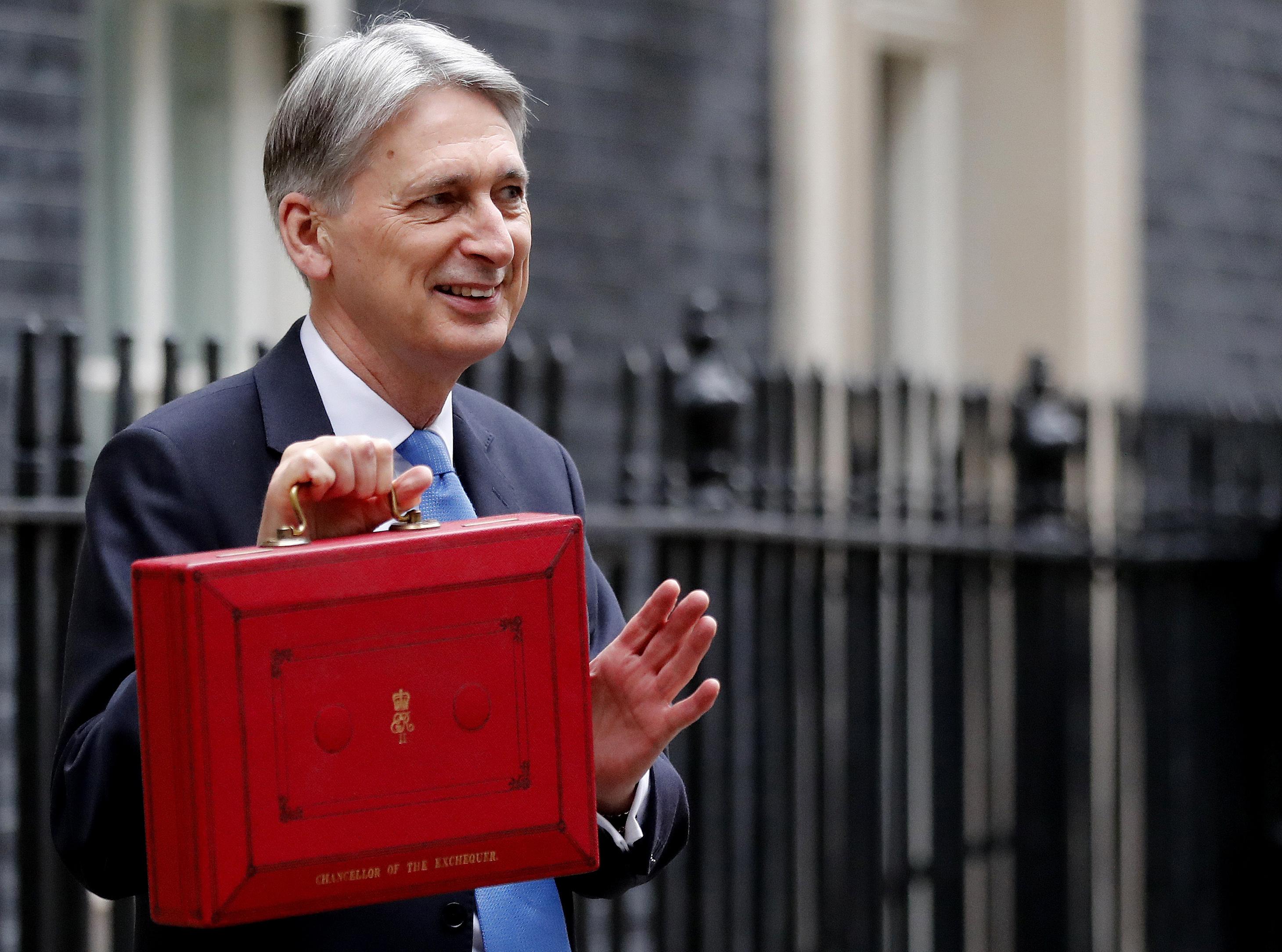 Instead of Mr Hammond speaking at lunchtime the speech is expected to start later at 3.30pm.

It gives him a chance to present all the important decisions over tax and spending to MPs before any Brexit deal is agreed with Brussels.

Brits are set to avoid major tax hikes in the Budget, after it emerged that the independent Office for Budget Responsibility had underestimated the amount the Treasury has received in tax receipts.

This has given Mr Hammond an unexpected £13billion windfall, which is a welcome funding boost to the series of promises he's made totalling around £100billion.

Families struggling with debts will get interest-free cash under a new scheme to save them from the clutches of payday loan sharks.

Mr Hammond wants banks to forge a new partnership with debt charities to support low-income households pay for unexpected costs, in a victory for The Sun.

The Sun has been campaigning to help protect millions of people stuck paying off high cost credit loans – where rates can be as high as 6,000 per cent – as part of our Stop The Credit Rip-Off Campaign.

The Chancellor will also extend the six-week "breathing space" to protect borrowers from creditor action to 60 days – giving them more time to get their finances back on track.

A cash boost for Universal Credit?

The Chancellor has hinted that he will give more cash to Universal Credit to "smooth issues" around the transition onto the new flagship benefits system.

Tories have been pressuring the Chancellor to give more cash to Universal Credit, after reports that thousands will be worse off by hundreds of pounds a month when they roll onto the new system next year.

More money for the NHS

The Chancellor is under pressure to relieve the strain on workers while finding money for the NHS and the police.

In a policy announced earlier this year, Theresa May said she aims to give the NHS an extra £20 billion by 2023.

This equates to a 3.4 per cent annually – but is less than the 3.7 per cent average increase the NHS has had since it was created in 1948.

Why your insurance bills could go up

Now it looks like the Chancellor is planning to hike this tax even further, after already raising the rate of this tax from 6 per cent in November 2015 to 12 per cent now following three increases made by the Government.

Chancellor Philip Hammond is set to scrap a scheduled 2p-a-litre rise at the pumps in the Budget in a victory for The Sun.

It will be the ninth freeze in a row, thanks to The Sun campaigning successive Chancellors to halt the annual raid on motorists.

It's predicted Philip Hammond will cut the tax relief that savers get on their pension funds as a way to fund the Government's NHS spending.

Pension tax relief costs the Treasure about £39 billion a year.

What happened in the last Budget?

A Government thinktank is pushing for a new buy-to-let tax relief that will benefit both landlords and tenants – and allow renters to buy the home they're living in.

They want existing buy-to-let properties to be eligible for a capital gains tax relief, but the gain to be passed on to both landlords and their tenants.

Landlords would get a windfall when they sell to their tenants, while tenants will receive thousands of pounds towards their mortgage deposit under the new proposals.

It also suggests the Treasury could fund the tax break by cutting other reliefs for buy-to-let investors.

Philip Hammond is targeting people who take on work as a private company but are actually employees and should pay contributions.

The Treasury believes a third of self-employed people use this trick to get a tax break.

Ditched plans for a VAT tax raid on small firms

Mr Hammond is expected to ditch plans for a VAT tax raid on small firms and White Van Man in favour of a less radical option that would see traders phased into the sales tax regime more gradually.

Treasury insiders say he has been persuaded against a controversial move to halve the VAT treshold to £43,000, which would have dragged thousands of thousands of small firms into the VAT system.

Instead the Chancellor is expected to freeze it at £85,000 until 2022 – and then introduce a sliding scale system where the more money they earn the more income falls into VAT.

A shake-up of marriage ceremony laws is on the cards, and Philip Hammond will announce a review to open up more pubs, restaurants and hotels to hold weddings.

The move is designed to slash the cost of getting married.

Philip Hammond could be on track to cancel a planned tax cut – costing families up to £130 a year – by ditching Tory promises to slash income tax.

Tories promised in their 2015 election manifesto that they would raise the personal allowance to £12,500 by 2020 – which is the amount Brits have to start to pay tax at.

Last year Mrs May promised to stick to the vow, and said they would keep taxes as low as possible.

The DUP and Brexiteers could threaten to vote down the tax hike though, which would strain the Northern Irish party's alliance with the Tories even further.

But other reports say he's going to bring the income tax cuts forward in a Brexit boost.

Wait and see on this one.

The government plans to increase the beer duty by 3.5 per cent, which has sparked fury among some MPs and pub chiefs.

The tax would add 4p to the cost of a pint, which could cost thousands of jobs across the trade.

Beer duty in the UK is already the third highest in Europe at 38p on 3.5 per cent ABV lager and 54p for a five per cent ABV pint.

Mr Hammond is plotting to hike the tax firms pay on gas energy in a bid to wean them off carbon and onto renewable forms of energy.

But this would add up to half a billion pounds a year extra onto their annual energy bills – costs which may be passed on to customers, experts have warned.

The Chancellor is looking at "equalising the tax between gas and electricity", according to a Treasury source.

Mr Hammond will announce advanced plans for a 50p Brexit coin, and it'll be available from March 29 next year, the day Britain exits the EU.

In a bid to send out a positive signal to the world, the seven-sided coin is expected to bear the phrase 'Friendship With All Nations'.

The plans are a major victory for The Sun – we've campaigned for the government to create an enduring gesture to mark Brexit as a landmark national moment, such as a special stamp or coin.

What is always included in the budget are major tax policies such as changes to income tax and National Insurance, spending and a general outlook of the UK economy.

Why isn’t it called the Autumn Statement anymore?

The Autumn Statement was scrapped by Philip Hammond in 2016.

At the recommendation of the Institute for Fiscal Studies (IFS), there is now a Spring Statement instead, with the Budget presented later in the year.

Spring 2017 saw the last Budget to be held at that time of the year.

This year, a Spring Statement was given for the first time.

The government has said that changing the tax system once a year, rather than twice, will lead to greater financial stability.

The Chancellor being pictured holding the red box briefcase is a traditional part of every Budget, but what is in it?

Mr Hammond is often viewed as a boring accountant, but he has actually had an exciting career before becoming the UK's top financier.

Earlier this year, Philip Hammond told Theresa May to "butt off" of his Budget as relations collapsed.