“What was it like growing up with Mel Brooks?” I get asked. A lot.

And I know what people want to hear. They’re expecting me to tell them about a life of luxury and constant hilarity. I don’t blame these people for assuming that I must have had a privileged childhood.

In fact, they’re half right. My privilege didn’t come from my father’s money or fame. My privilege came from being a son of Corporal Mel Kaminsky, the World War II veteran.

At 17, my father enlisted in the Army and was sent, briefly, to Virginia Military Institute before heading to artillery school at Fort Sill, Oklahoma. During his time in the military, he traversed the U-boat-infested North Atlantic in the dead of winter.

He served as an artillery spotter, then a combat engineer. He marched from the French coast into the heart of the Third Reich, mopping the tail end of a battle known as the “Bulge.”

And then, mercifully, he came home. With advice. Loads of it, which he would later share with me, often over dinner, without prompting. Here are a few of the anecdotes I remember.

▶When a 155mm artillery piece goes off nearby, make sure you’ve got cigarettes jammed into your ears.

▶When firing your Springfield rifle on the range, stuff a towel between your gun and your shoulder to avoid bruising.


▶When probing for a buried German S-mine, don’t try to defuse it yourself. Just dig around the edges with your bayonet—and call for the sergeant.

▶When radioing in an artillery strike from your jeep, don’t dawdle. Get out of there fast. The enemy can triangulate your position and call in a counterstrike within seconds.

▶When coming upon a farmhouse that the German army has just abandoned, make sure you sweep every room for booby traps. Especially the toilets. They may hide a “potato masher” grenade hooked to the flushing chain.

▶When the ground is frozen too stiff to dig a foxhole, wait for the engineers to blast one out with explosive charges.

▶And when you’re hunkering down for the night in that freezing hole, do not sleep with your boots on. That’s the best way to lose a couple of toes to frostbite. Take off your boots and your socks, rub your feet vigorously for a few minutes to get the blood flowing, then smear bacon grease from your K rations over them before putting your socks back on. Two layers of socks, if you got ’em.

You would think I would have been traumatized, or at least scared, by these war stories. Instead, I was in awe.

My father had courage and resilience. He thought on his feet, and under tremendous pressure. He needed to confront his enemies while depending on his friends. He couldn’t feel entitled to anything, even his own life. He had to fight for that, and every scrap of success that followed. And through it all, he remained deeply loyal and passionately grateful to a country that he felt privileged to be born into.

Devolution: A Firsthand Account of the Rainier Sasquatch Massacre


Growing up, I learned that the world can be a very hostile, dangerous place. Even in the best of situations, that world would never love me like my parents did. I learned that I would need survival skills to make it outside the bubble of my bedroom.

Of course, I don’t teach my father’s exact, Nazi-fighting lessons to my son (although the Nazis do seem to be making a comeback these days). It’s the lessons behind the lessons, the larger themes that I’m so grateful for. 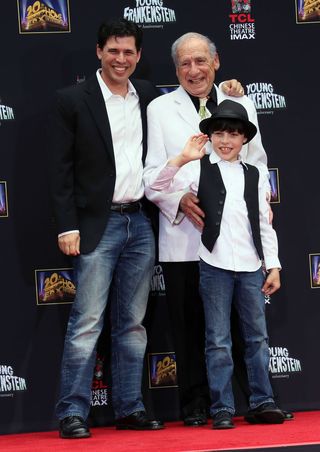 I never had to go to war, and I pray to God my son doesn’t either. But everyday life comes with challenges that require survival skills.

That’s why I push my son to challenge himself and let him fight through difficult situations.

It kills me sometimes not to step in and save him, either from the world or himself. Nothing is more painful for a parent than watching their child suffer. But as I always tell him, “I’ll never let you take on something you can’t handle.”

I would never put my son in an impossible situation any more than my dad’s platoon would let him go into combat alone. I can support him, guide him, help him to a certain degree, but he’s going to have to do his part to grow up.

As a father, and a son, I’m lucky to have learned so many survival skills from a man who survived some of history’s greatest trials. So yes, I grew up very privileged to have Mel Brooks as a father, and to all who’ve asked this question before, now you know why.