Silence. That’s what you hear when corporate executives from the big end of town are asked publicly about the prospect of a Labor win on May 18. In private, the sounds range from low grumbles to high-pitched hysteria.

Their comments reflect both their personal and their wider concerns about the economy. 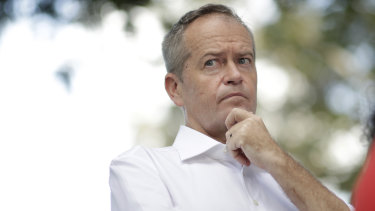 Many in big business see Bill Shorten as being captive to unions.Credit:AFR

“The richer you are, the more worried you are," one very high-net-worth individual quipped. Another – this one a billionaire – suggested a Labor win would be "a disaster". Both have their hands on the tiller of very large companies employing tens of thousands of people.

In general, big business concerns reflect their belief that the economy is increasingly fragile and that Labor’s policies might tip the scales.

More than at any time over the past 20 years, those governing large companies understand their political stocks have been devalued. They realise the risks of raising their heads above the parapet are immense and the best course of action is to keep a low profile.

To the extent business leaders will publicly comment, the vanilla response is typically a call for "certainty" or "stability".

They fear retribution from a Labor government that has shown a disregard for their views on corporate tax, disdain for excessive pay and disgust at the way many have treated their customers.

One high-profile captain of industry who had been outspoken about Labor policies when it was last in office said the companies he was involved with were targeted. He now voices his concerns behind the veil of anonymity.

Overwhelmingly, the biggest single fear among business is industrial relations – they see Opposition Leader Bill Shorten as being captive to unions and are concerned about a rise in their power – and break-outs in wages and conditions.

For many in business, the idea of a living wage is their living nightmare.

This politics of envy is a real concern.

Rather than speak individually, business has relied on the cover of a pack – using lobby groups like the Business Council of Australia (BCA) to promote their views.

But a year of advertising, paying for appearances on Sky News and hosting town hall meetings in the suburbs of capital cities doesn’t seem to have gained the BCA too much ground for its lobbying efforts.

The power of the big business lobby has been diluted in part because the church it represents is so broad and its members can have such disparate issues, that the umbrella group's views lack unified focus.

At an ideological level, Labor’s Robin Hood movement to take from the rich and give to the poor clearly doesn’t resonate well for those perched at the top end of the wealth pyramid.

“This politics of envy is a real concern," a senior business leader noted this week.

"There is a high level of disquiet about Shorten," said another, who added: "Some policies are very worrying. The living wage is a concern – particularly for small business."

And he further believes this represents a real threat to employment – a risk that he thinks Labor doesn’t understand.

Those at the upper echelons of business are also critical about Labor’s tax policies on negative gearing, capital gains tax, cash refunds for excess franking credits and the taxing of trust income at 30 per cent.

The effect that Labor’s proposed changes to negative gearing and capital gains tax will have on residential property values is foremost among the concerns given the steep falls in house prices we have experienced over the past year.

The negative wealth effect, growth in impaired loans and a further tightening in credit are real risks cited by executives of small and large companies. The potential that this will spread to consumer spending and the broader economy is what worries them more.

But banks executives are the least likely to criticise Labor policy – they are frightened of whichever party is elected.

To the extent that big business has anything positive to say about a Labor win, it was that treasurer-in-waiting, Chris Bowen, seemed to be more cautious and understood the need to keep the economy growing.

Others mentioned that Bowen had been doing corporate visits in recent weeks – but clearly it’s not enough to allay their concerns.