You win some, you lose some.

Such was the case for Rami Malek and a now-viral fan. As the story goes, 19-year-old film major Xan Black approached the Bohemian Rhapsody actor on the street in New York City ahead of a scheduled Q&A session about the film on Monday night.

“I walked up to him very calmly—he was signing a poster—and I started recording, which, I don’t know on my end if it was good to start with the video. Because what I do is try to get shout-outs for my friends, like video messages,” Black explained to The Cut.

What ensued in the resulting 7-second clip of their exchange has amassed more than 2 million views and thousands of likes and retweets on Twitter. “Can you say hi to my friends?” Black asked the actor as the phone was recording. However, he quickly and politely turned down the request, “No but we can take a picture…is that alright?” Cue the cringe!

Black apologized, said thank you, and later posted the clip to Twitter under the caption, “THIS IS PROBABLY THE MOST EMBARRASSING THING TO EVER HAPPEN TO ME.”

Rami Malek Has Fun With Fashion at 2017 SAG Awards In speaking to The Cut, Black understood where Malek was coming from. “I knew he was in a rush. He arrived at 9, the Q&A was at 9:15. And I don’t know, it just felt kind of startling because I didn’t expect that response for videos. And he’s not obligated to do what I expect him to.”

Not to fret—they’re still a fan. “I still got tickets to see Bohemian Rhapsody, and I’ll still go see it,” Black told the website. “I think he’s a genuine person, and this was not at the right time, because this was at night, and he was rushing. I’m sure in a more intimate setting, in the daytime, he would be much more approachable.” 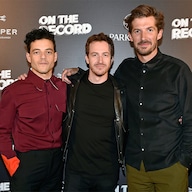 Malek eventually became one of the video’s millions of viewers. After his publicist notified him of the video, the actor apprehensively watched it, fearing for the worst case scenario.

“I finally brought myself to watch it,” he confirmed to Vanity Fair. “I thought, ‘Oh, that’s not that bad. I don’t find myself offensive.'”

As he explained to the magazine, “I am happy to take photos with anyone. I just want to be aware of what people are doing in the moment. When someone films you automatically, it’s a bit intrusive.”

However, the actor is laughing it off. As he told Vanity Fair, “I’m going to do Ellen, and I’m thinking about bringing it up because I find it so funny.”

No harm, no foul and definitely a few more Twitter followers for Black.