Companies hoping to win work on the $498 million Australian War Memorial redevelopment must hire veterans or their family members or risk missing out on contracts.

Part of the expression of interest and tender process will require businesses to show how they plan to maximise their engagement with retired Australian Defence Force personnel or their families. 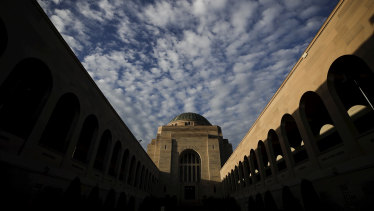 A focus on jobs for veterans will be part of the War Memorial redevelopment.Credit:Alex Ellinghausen

Minister for Veterans' Affairs Darren Chester said ensuring there were job opportunities for veterans was an important part of the tender process for the redevelopment.

"This means that for any company to win construction work at the memorial they will need to demonstrate a genuine commitment to not only the employment of veterans, but also to supporting their businesses and their family members," the minister said.

There will not be mandatory ratios for veteran positions, but the Australian War Memorial’s project director Tim Wise said the memorial has made it clear that jobs for veterans will be an important deciding factor when awarding contracts.

"Frankly with the amount of interest in the project, to underdo that schedule and score poorly it would really impact their opportunity to bid for this," he said.

Returned and Services League president Major General Greg Malick, who is also on the War Memorial council, said they wanted to maximise jobs for veterans but it was up to companies how they did that.

"They've just got to make it quite clear in their application that they’re going to employ as many veterans as possible," he said.

Executive director of the redevelopment program Wayne Hitches pointed out one smaller project had already been completed with the help of veteran work.

The $10 million car park project had three veterans working for the duration of the works and a total of five at the peak before it was completed.

"It was a good test case for us for how this would roll out," Mr Hitches said. "It worked very well."

Associate Professor Nicole Sadler from the Phoenix Australia Centre for Posttraumatic Mental Health said most veterans do really well transitioning out of the military, but not everybody does.

"The important thing is that we’re assisting veterans to find work that's meaningful for them, and their skill sets and capabilities are well met," she said.

Expressions of interest in the nine-year expansion project were expected to open early next year.

Major General Malick said working on the War Memorial would generally be a "very positive experience" for many veterans.

"Most veterans come to the War Memorial and find it a good experience, a cathartic experience, but it sometimes brings back uncomfortable memories," he said.

"Labor welcomes any support for veteran employment through the project, including veterans’ employment programs being a key part of construction contracts," Mr Neumann said.