The one-time Deputy speaker of the Commons, 82, is partial to bold prints and bright colours, as are soccer shirt designers, it seems. 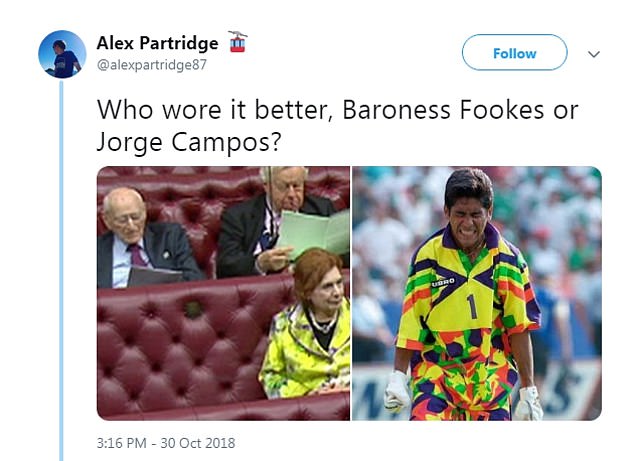 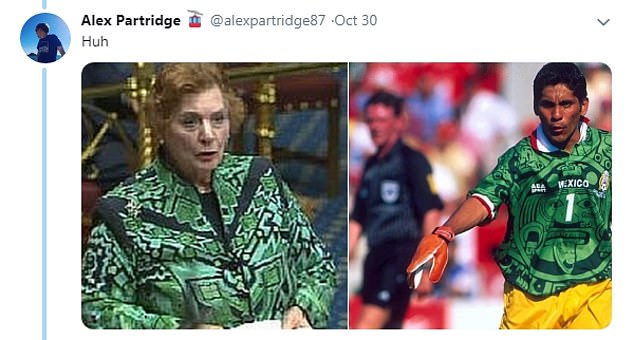 More Jorges…he then added this eye-catching emerald green number into the mix, comparing it with a similar-looking kit worn by the now retired goalkeeper

The floodgates opened: this floral blue and black number didn’t look entirely dissimilar to the 1992 Manchester United away kit 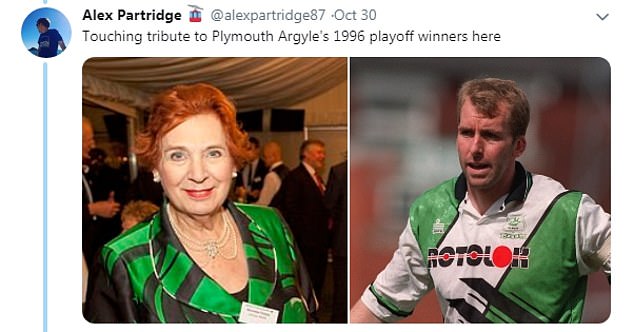 Obscure: The thread dug deep into the footballing vaults to unearth a Plymouth Argyle kit featuring a black and green jacket from the Tory peer’s wardrobe

The Twitter thread began with a neon-yellow number and the line: ‘Who wore it better, Baroness Fookes or Jorge Campos?’

The former Mexican goalkeeper, who also played up front, was famous for his migraine-inducing shirts during his footballing career in the nineties – and particularly during the 1994 World Cup.

Once Partridge had opened the floodgates, the comparisons kept on coming, with more and more matches being posted by both Partridge and other fans who’d bought into the collision of football fashion and parliamentary outfits. 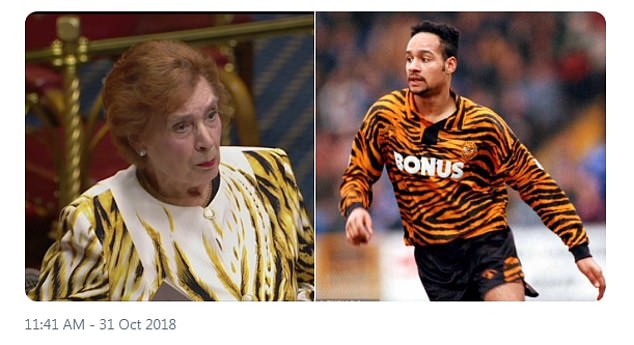 Love your tiger stripes! The Hull City away kit from the 93/94 season was dubbed the winner of the Twitter thread matches 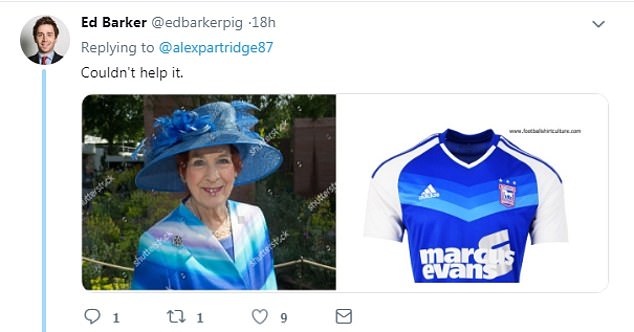 Blue is the colour! Diagonal stripes in different shades of blue but these two tops in the same tweet 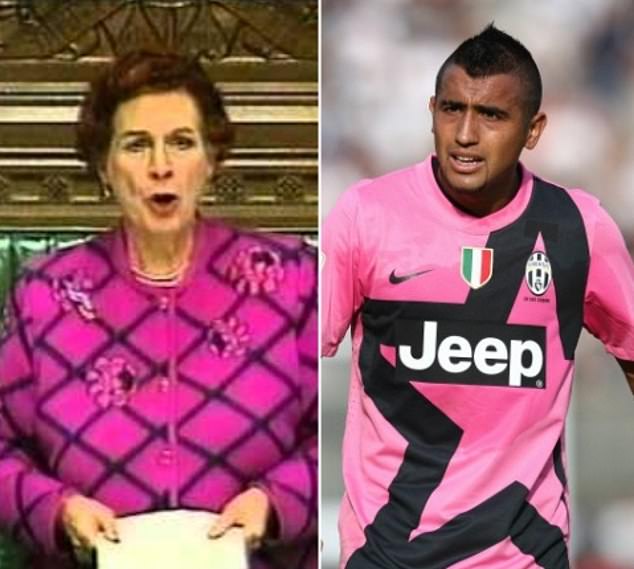 Juventus’ cerise pink away kit from the 2011/2012 season featured big, black lines, as did this eye-catching woolen jacket worn by the politician 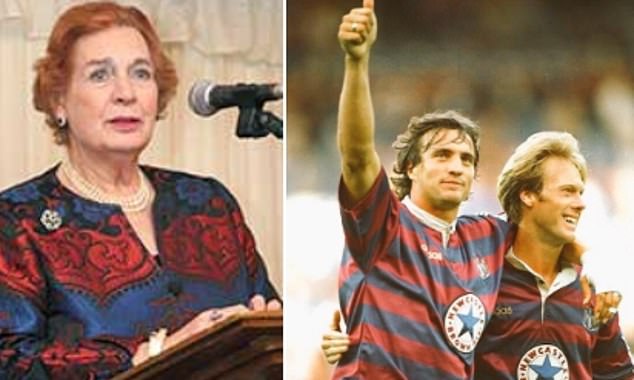 Claret and blue works well on football kits, as ex Newcastle striker David Ginola proves…and with a set of pearls 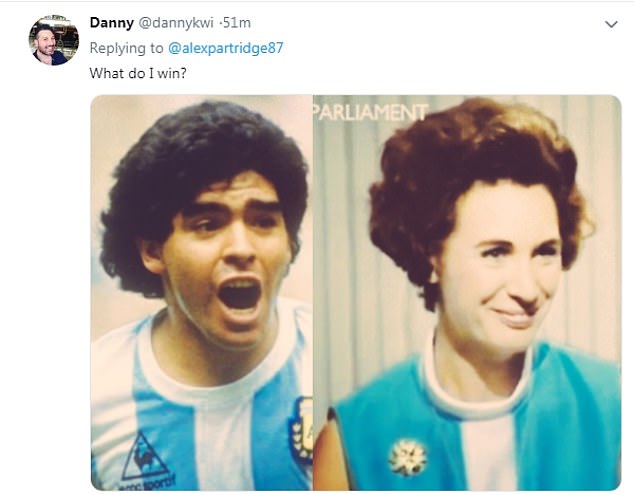 Rolling back the years, Diego Maradona wearing the Argentina kit and an earlier shot of Baroness Fookes were also throne into the mix 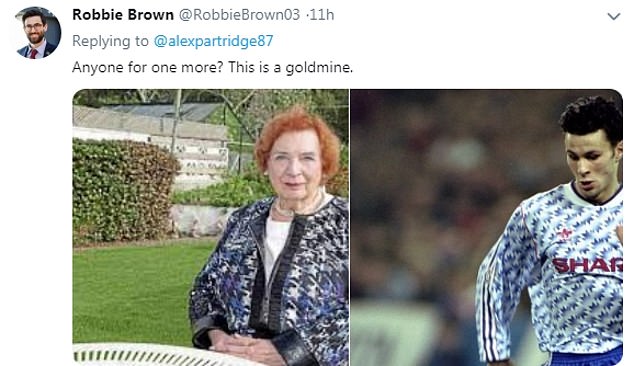 The gift that keeps on giving: Fookes wears a pattern that Ryan Giggs once also sported for Manchester United

And let’s not forget Arsenal playing away; a more tenuous match puts Lee Dixon in yellow and black next to a more casual-looking Baroness 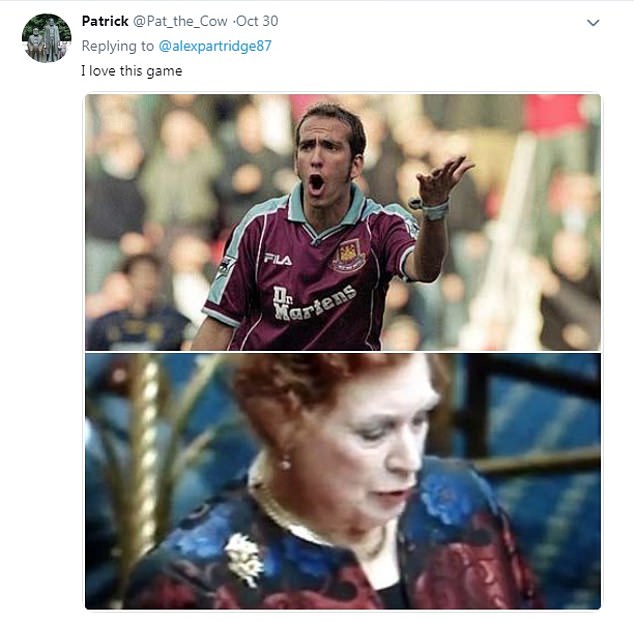 A secret West Ham fan? The blue and claret number was also compared with the regular kit of the London Premiership side

Elsewhere, there was a cerise pink away shirt worn by Juventus in the 2011 to 2012 season of the Italian league that Baroness Fookes had a strikingly similar version of.

And a Hull City Tigers shirt – literally adorned with tiger stripes – from the 1993/94 season sat side-by-side with the Tory peer in a similar animal-inspired print.

Twitter, unsurprisingly, loved the stream of tweets, with more and more people conjuring up their own matches.

@womblesultra wrote: ‘This is the best thread ever seen’ while @HunterMatthew_ added: ‘It will be some time until I see a thread I enjoy as much as this one. Well played, sir.’ @scheza called it ‘glorious’.