FORT WAYNE, Ind. — A confident President Trump left Washington for three rallies to close his campaign blitz ahead of the midterm elections. First stop was Cleveland, Ohio. “Everything we’ve achieved is at stake on Election Day,” he said.

The president’s surrogates are part of the full court press.

“I have a feeling that blue wave is going to hit a red wall,” said Vice President Pence.

The final push follows an intense weekend of stumping in four states: Montana, Florida, Tennessee and Georgia. He also intensified the rhetoric on immigration, which tops his list of key issues. 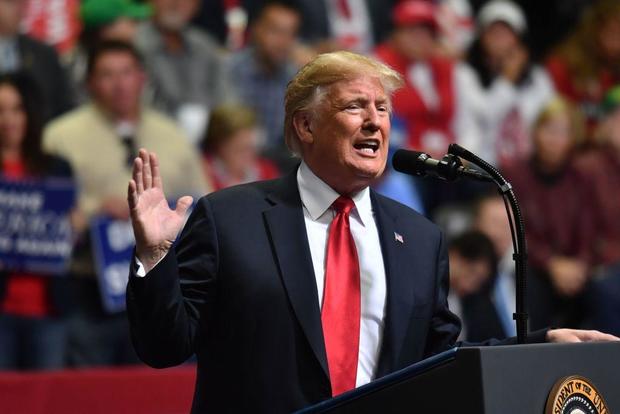 “Democrats inviting caravan after caravan, isn’t that nice, of illegals to flood into country,” he said.

The Trump campaign issued similar warnings in a controversial TV ad, which linked immigrants seeking asylum to an illegal immigrant and convicted murderer. NBC aired it during Sunday night football, but pulled it Monday, citing its “insensitive nature.” Fox News and Facebook stopped running it too, but Mr. Trump stood by it.

In the past 16 years, the only president with a worse approval ratings heading into a midterm election than Mr. Trump was George W. Bush in 2006, when Republicans lost 30 seats in the House. Democrats hope to see a repeat, but know it’s not a done deal.

Former President Obama, who has campaigned extensively during this midterm election, was out working to turn up the turn out.

Voters seem to know it. A CBS News battleground tracker poll finds 93 percent of them in both parties say their vote Tuesday matters just as much or more as in a presidential election. So far, 31 million people have already voted early, shattering the midterm record set in 2014 when 28 million cast a ballot.