In 1985 oceanographer and Naval Reserve commanding officer Robert Ballard stunned the world when he found the Titanic. But how he did it remained a highly-classified U.S. government Cold War secret for decades. An exhibition at the National Geographic museum in Washington, D.C., called “Titanic: The Untold Story,” recounts the tragic fate of the ship, a supposedly unsinkable liner that struck an iceberg on April 15, 1912, and its remarkable discovery.

In the 1997 movie “Titanic,” the characters played by Leonardo DiCaprio and Kate Winslet spent some intimate moments in her elegant first-class suite. That movie set now resides at the National Geographic Museum.

There are actual props from the film, and plenty of real artifacts, too. 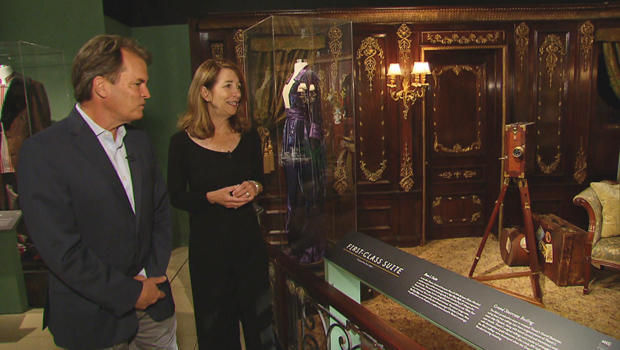 Kathryn Keane, National Geographic’s Vice President for Public Experiences, said the focus of the exhibit is the meaning and the mystery of the ill-fated ship.

One artifact in the exhibit is a deck chair, one of only seven that still exists. “The crew of the Titanic were just throwing these things overboard hoping that the passengers in the water might have something to hold onto,” said Keane.

The exhibit tells the stories of Titanic’s heroes, like Wallace Hartley and his eight-person band who played until the very end. His body was recovered with a beautiful pouch full of sheet music. On display is the actual music he was carrying when he was recovered from the site, said Keane.

Of the 2,200 people on the Titanic, more than 1,500 died, including 47-year-old John Jacob Astor, the wealthiest person on board. The exhibit features his watch, and the life preserver that his 18-year-old wife wore. She survived; he did not.

“It’s a sad story, but he was on the wrong side of the ship,” said Keane. It was the side where crew were only allowing women and children on board lifeboats; even though there was a seat, he was denied.

It was a horrifying two hours and forty minutes before the Titanic disappeared beneath the waves. It then plunged more than two miles to the bottom of the Atlantic, where it rested unseen by human eyes for 73 years.

But the sinking of the Titanic is no less mind-boggling than the discovery of its wreckage.

The story of finding the Titanic starts in 1982 when Ballard, who had performed a number of top-secret Naval missions during the Cold War, was developing his own remotely-operated underwater vehicle.

Unable to get science grants, he asked Deputy Chief of Naval Operations Ronald Thunman if the Navy would help fund his project. “He said, ‘All my life I’ve wanted to go find the Titanic.’ And I was taken aback by that,” Thunman recalled. “I said, ‘Come on, this is a serious, top secret operation. Find the Titanic? That’s crazy!'”

Thunman did say yes, but only if Ballard used the funds and the time to find two missing U.S. nuclear submarines – the Thresher and the Scorpion – which had sunk in the Atlantic in the 1960s. 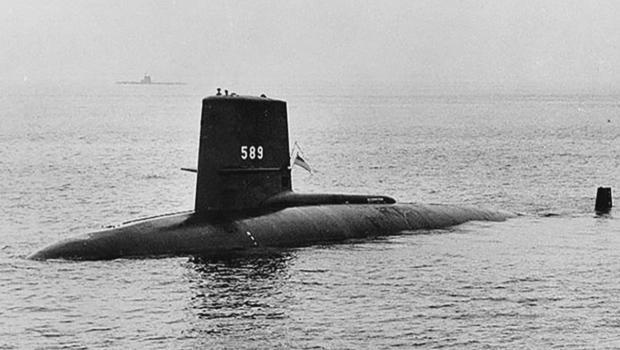 The nuclear submarine USS Scorpion, which had sunk in the Atlantic in May 1968. Its 99 crewmembers were lost.

The focus of this mission was to find the Scorpion. The Navy didn’t want anyone else, like the Russians, to find the submarine. “It was very top secret,” Ballard said. “And so I said, ‘Well, let’s tell the world I am going after the Titanic.'”

The top secret part of the mission took longer than he expected, so when he found the Scorpion, and was finally free to look for the Titanic, he only had 12 days left. But his experience finding the Scorpion had been invaluable. “I learned something from mapping the Scorpion that taught me how to find the Titanic: look for its trail of debris,” Ballard said.

“So, you found it in eight days basically?” Reid asked.

He only had four days left to film the wreck before he’d have to leave the site. “Someone else had rented the ship,” he said.

Ballard still vividly remembers that moment when he first set eyes on the Titanic. But he also remembers how the mood suddenly changed. 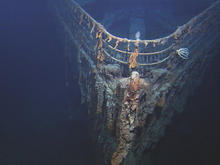 The bow of the Titanic as it was seen for the first time in 73 years.

“We realized we were dancing on someone’s grave, and we were embarrassed. The mood, it was like someone took a wall switch and went click. And we became sober, calm, respectful, and we made a promise to never take anything from that ship, and to treat it with great respect.”

“You don’t go to Gettysburg with a shovel. You don’t take belt buckles off the Arizona,” he replied.

Kathryn Keane says it’s that sense of respect for the Titanic, and its victims, that gives it its timeless quality.

Reid asked, “Why do you think after all these years people are still so fascinated with the Titanic?”

“I think there are lessons from the Titanic that we are somehow still compelled to want to hear,” Keane replied. “We’re always pushing the boundaries of technology and exploration, but the story of the Titanic reminds us that there are great risks and tragedies that accrue to those ambitions. And there are also great stories of heroism and survival in this story that give us hope, that maybe somehow we’ll learn as a species from our mistakes.”