Nashville, Tennessee is famous for a handful of different things, such as its mega-talented population of songwriters and its historic music venues. It’s also famous for its hot chicken. Hot chicken is an *iconic* dish in Music City — and if you haven’t tried it yet, you must. Hot chicken is Nashville’s legendary version of fried chicken that can be served with various levels of spice and heat, and I tried Nashville hot chicken at Hattie B’s for the first time and it totally lived up to the hype. It’s the perfect pitstop for anyone hoping to try the dish.

Before I get into details about Hattie B’s, though, let’s talk about where Nashville hot chicken originated: Prince’s Hot Chicken Shack. Believe it or not, the original hot chicken recipe was made for revenge back in the 1930s. The story goes like this: During the Great Depression, hot chicken icon Thorton Prince was known to be a "womanizer," according to NPR. Per the publication, when he arrived back home to his "steady girl" after a night out, she became suspicious. To get back at him, she served him homemade hot chicken dowsed in peppers and spices — but instead of suffering from it, he ended up loving it. In fact, he loved it so dang much that he perfected the recipe and opened up Prince’s Hot Chicken Shack, Nashville’s first hot chicken hub.

That, my friends, is where the hot chicken craze began.

To this day, Prince’s Hot Chicken is a go-to spot for Nashville residents, and Thorton’s great niece, Ms. Andre Prince Jeffries, currently owns it. However, Hattie B’s offers tourists and locals alike another go-to hot chicken spot in the city. Hattie B’s has three locations in Nashville: Nashville Broadway, Nashville West, and Nashville Melrose. All of them serve various hot chicken dishes, southern sides like Crinkle Cut Fries and Baked Beans, mouth-watering desserts like peach cobbler and banana pudding, and, of course, beer on tap that’s both local and domestic. FYI, Hattie B’s also sells craft beer by the can (and bottle), but those selections vary based on which Hattie B’s you visit.

Let’s start with the hot chicken, though (that’s why you’re here, right?). Hattie B’s is perfect for hot chicken beginners because it serves various hot chicken options ideal for anyone curious about its taste.

Fair warning: You’re probably going to get hungry after reading this, so go ahead and grab a spicy snack. 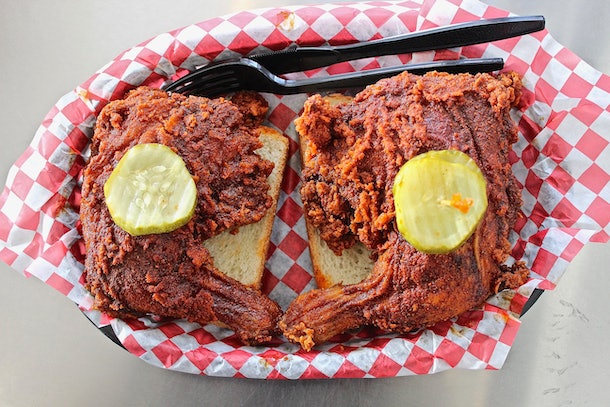 Where do I even start? Hattie B’s’ hot chicken menu features something for everyone. When you visit, you can choose from a selection of plate options that include tenders, wings, half of a bird, or more. You can also grab a platter of "Jumbo Tenders" or "Whole Wings," which are both perfect for sharing because you can choose "any quantity" you want, per the menu.

Regardless of which hot chicken selection you pick, you’ll get to choose the heat level of your chicken. Those heat levels include Southern, Mild, Medium, Hot!, Damn Hot!!, and Shut the Cluck Up!!! For more information on each level, check out Hattie B’s menu.

During my previous trip to Nashville, I was lucky enough to give various hot chicken selections at Hattie B’s a try. I’m a huge fan of the chicken tenders, and my favorite heat level is undoubtedly "Hot!" However, I’m a big fan of spicy food — so choose whichever heat level best suits your tastebuds. If you’re someone who isn’t into spicy stuff, I’d suggest trying the Southern or the Mild options.

He adds, "We began by making a spice blend in the kitchen at Bishop’s Meat & Three, a restaurant I opened in 2007 in nearby Franklin, about 20 miles south of Nashville. We played around with the recipe, getting it to the point where it had heat and flavor to the bone. We added hot chicken to the menu there in 2010, and it quickly became a guest favorite. Two years later, we opened Hattie B’s in Midtown Nashville."

Hot chicken isn’t the only delicious item on the menu, though. 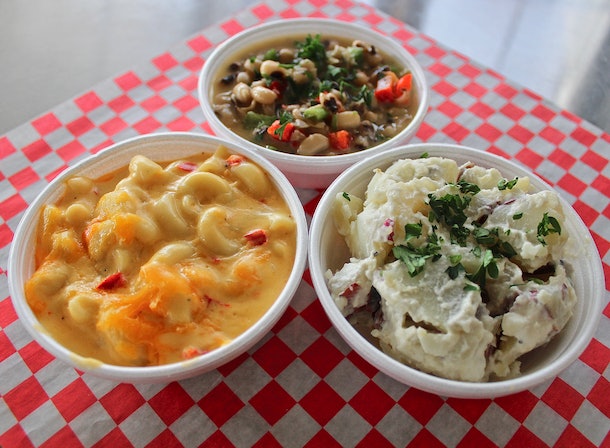 To be honest, the sides at Hattie B’s were just as good as the main dishes. Again, I got to give each side a try during my visit, and it’s kind of hard trying to decide which one was my favorite. Sides on the menu include Southern Greens, Crinkle Cut Fries, Pimento Mac & Cheese, Baked Beans, Red Skin Potato Salad, Creamy Cole Slaw, and Black Eyed Pea Salad. (I told you you’d get hungry during this article.) 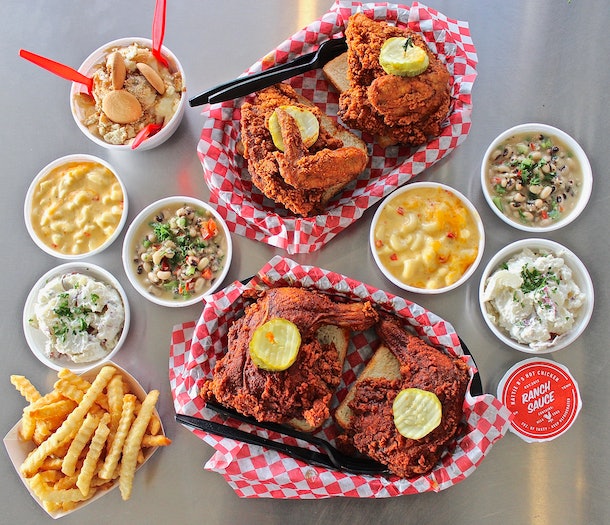 My personal favorites were definitely the Creamy Cole Slaw and the Pimento Mac & Cheese. TBH, I ended up dipping my hot chicken in both of ’em, and highly suggest doing the same. Whether you end up dipping your chicken into your sides or eating them separately, I don’t think you’ll be disappointed. 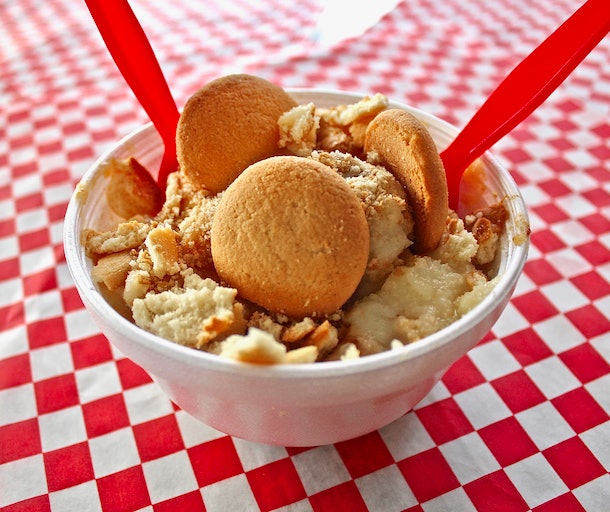 There’s one more thing that I want to talk about before I send you to Hattie B’s: the desserts. I know the restaurant is famous for its hot chicken, but its dessert menu is straight fire. It features sweet selections like seasonal peach cobbler, root beer or Coke floats, ice cream, and banana pudding. FYI, banana pudding was my favorite, hands down.

The dish consisted of creamy banana pudding cut with wafer cookies, and each bite had the perfect amount of sweet creaminess and vanilla crunch. It’s the perfect post-hot chicken treat, if you ask me.

Now that you know all about Hattie B’s, go ahead and book your trip to Nashville, but keep in mind there are other Hattie B’s locations outside of the city. Those spots are located in Birmingham, Memphis, Atlanta, and Las Vegas. Yes, you can still get "Nashville hot chicken" outside of Nashville.

If you end up visiting a Hattie B’s location in Music City, you can try other chicken spots in town like Prince’s Hot Chicken (the OG) or Pepperfire Hot Chicken. I haven’t been to those restaurants yet, but I’m sure they’re delicious.