Today’s midterm elections feature the most diverse group of candidates in U.S. history. A record number of women, people from different ethnic backgrounds, and LGBTQ candidates are running for all levels of government across the U.S.

In Arizona, just about the only thing we know for certain is that the state will get its first female senator. Republican Martha McSally and Democrat Kyrsten Sinema are battling it out for the coveted seat. Beyond Arizona, a wave of women are on the ballot fighting for seats that have never been held by a woman. But in this election, diversity is much more than gender.

Voters in Georgia could make history electing Stacey Abrams as the nation’s first black woman to be governor. Abrams, the former minority leader of the state’s House of Representatives, and Kemp, the current Georgia secretary of state, have been locked for months in a close contest that has attracted national attention. Abrams received high-profile support from former President Barack Obama and Oprah Winfrey.

Minnesota and Michigan may pave the way for the first Muslim women to be in Congress with candidates Rashida Tlaib and Ilhan Omar. Tlaib is an attorney, former state legislator and the daughter of Palestinian immigrants. She is running in Michigan’s 13th district House race and is now facing a last minute write-in challenge from the woman she defeated in August. Omar, who is running to replace Rep. Keith Ellison, the first Muslim man elected to Congress, is heavily favored in her race.

While these candidates are Democrats, Republicans may also break ground. 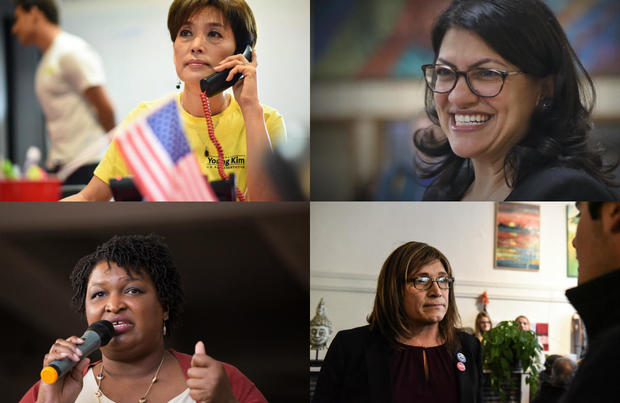 In California, Republican voters could put the first Korean-American woman, Young Kim, in Congress. Although California is often seen as a largely progressive state, it’s home to a number of red districts, particularly in Orange County. Kim, a self-made woman, is facing off against Democrat Gil Cisneros, a Navy veteran and philanthropist, a career which began after he won the California Mega Millions lottery in 2010.

The number of female congressional candidates has increased by 44 percent since 2012, and the number of women of color has increased by 75 percent. The face of government could also change in other ways. Roughly 1,800 current and former educators are vying for state seats and an unprecedented 200 veterans are running for Congress.

But within the diverse field there is a common thread: women. Unlike the past, they are not trying to downplay their femininity.

“I put criminals in prison during the day and change diapers at night,” said Jennifer Wexton, who is challenging incumbent Rep. Barbara Comstock in Virginia’s 10th Congressional District.

They are also highlighting their unique strengths. Democrat Katie Hill, who is attempting to unseat Rep. Steve Knight in California’s 25th congressional district, released a campaign video of her rock climbing. In it she says, “This is hard, but not as hard as running for Congress.”