Woman, 23, who battled Hodgkin’s lymphoma sets up a ‘Cancer Chicks’ group to help patients feel stylish – after realising there was no support for young women struggling with their changed appearance

A woman who battled cancer while at university is making it her mission to help other young people battling the disease feel stylish and confident.

Olivia Smith, 23, from Southampton is in remission after treatment for Hodgkin’s lymphoma, and initially set up a Facebook page called Cancer Chicks as a source for anyone going through a similar ordeal.

She has now partnered with Trekstock, a young adult cancer support charity, and together they aim to help as many other cancer sufferers feel beautiful through events and meetups.

‘When I was diagnosed with cancer as a girl in my early twenties, I found that the most daunting aspect of the treatment was how my identity was going to be ripped away from me,’ Olivia said.

‘I began getting hundreds of messages from people in the same position as me seeking advice. I also did a questionnaire where I found that over eighty percent of young women found the change in appearance the most daunting thing about a cancer diagnosis. 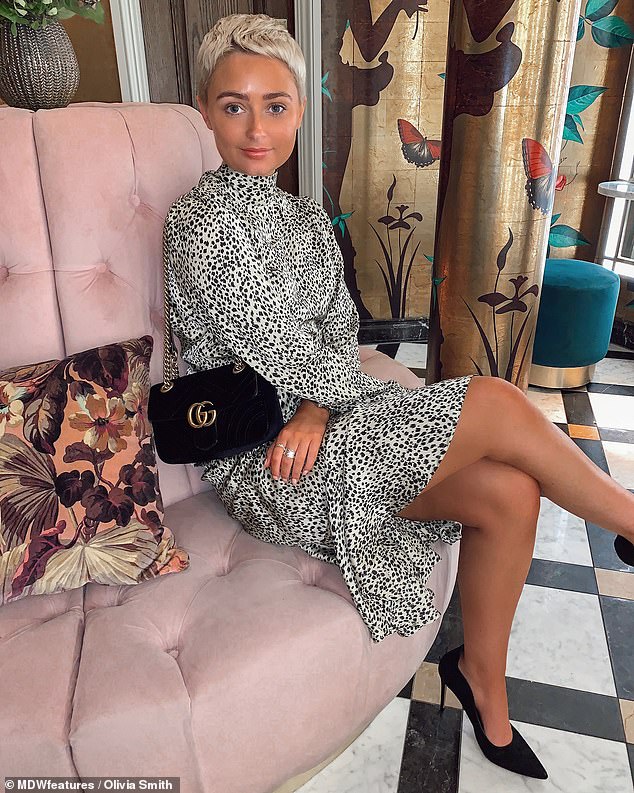 Olivia Smith, 23, from Southampton pictured on the day of her graduation, has now recovered from her cancer and aims to help others feel stylish and beautiful through their cancer treatment 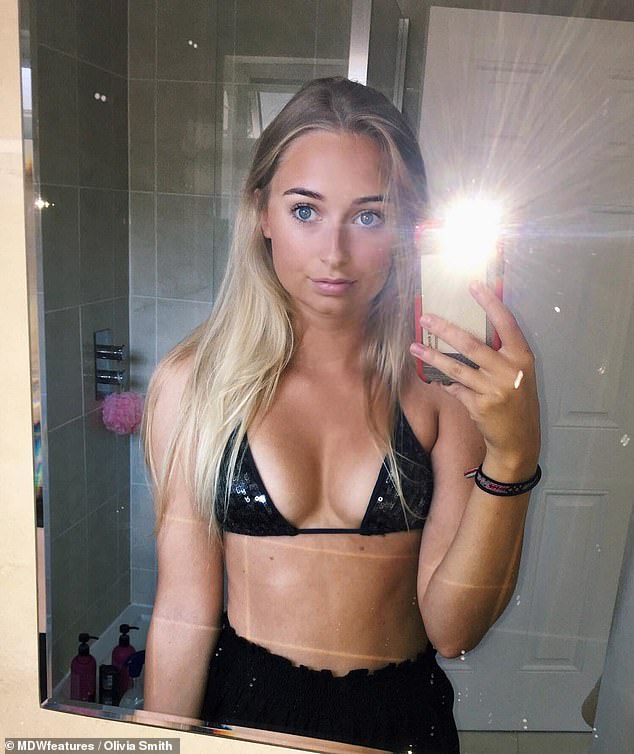 Olivia (pictured before her diagnosis) first experienced chest pains when she was on holiday in Menorca. When Olivia first went to the doctor with questions about chest pain, they initially passing off her symptoms as a result of alcohol. She was later diagnosed with Hodgkin’s lymphoma 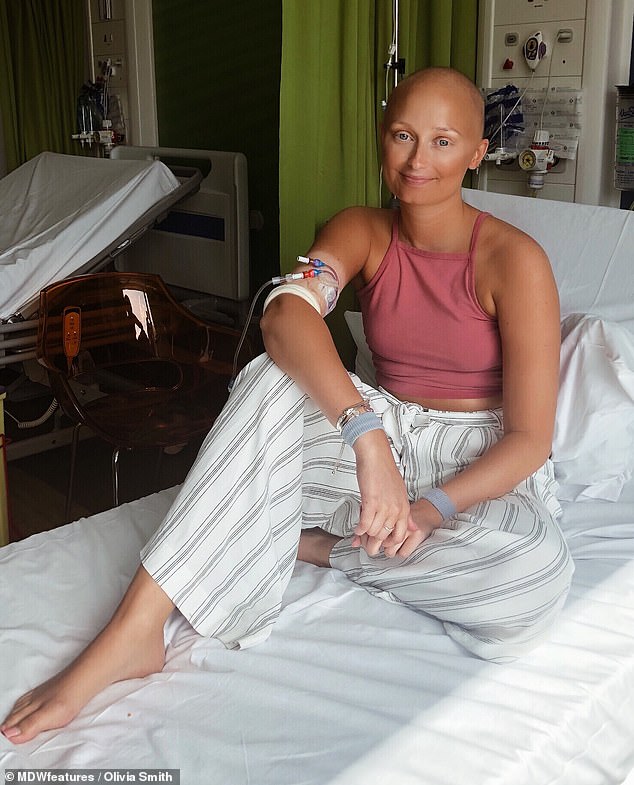 Olivia pictured in hospital at her last during one of her 12 rounds of chemotherapy, when she decided to ditch the wig

‘I felt that there is so much support out there for all aspects of cancer apart from the change in identity you go through, which is perhaps deemed as less important by health professionals.

‘Eventually I found it impossible to keep up with all the messages, so I made a Facebook group for everybody to connect and I called it Cancer Chicks. 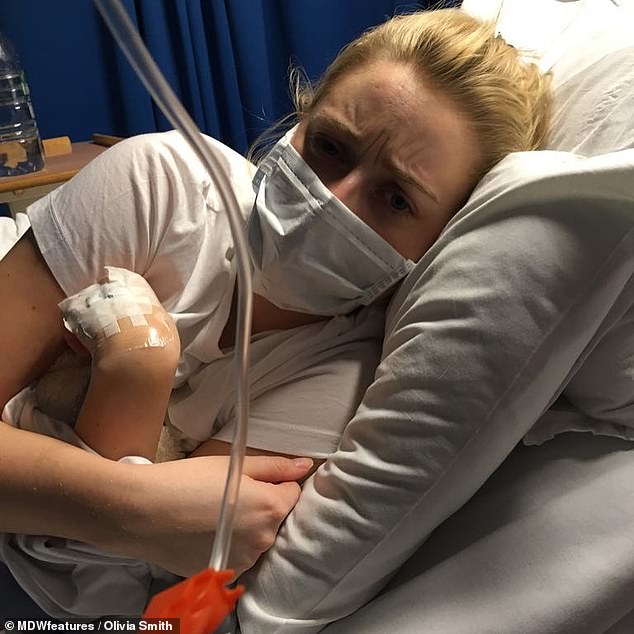 Olivia posted this picture to Instagram of a round of chemotherapy before she lost her hair, writing’this is how I actually look most of the time’ 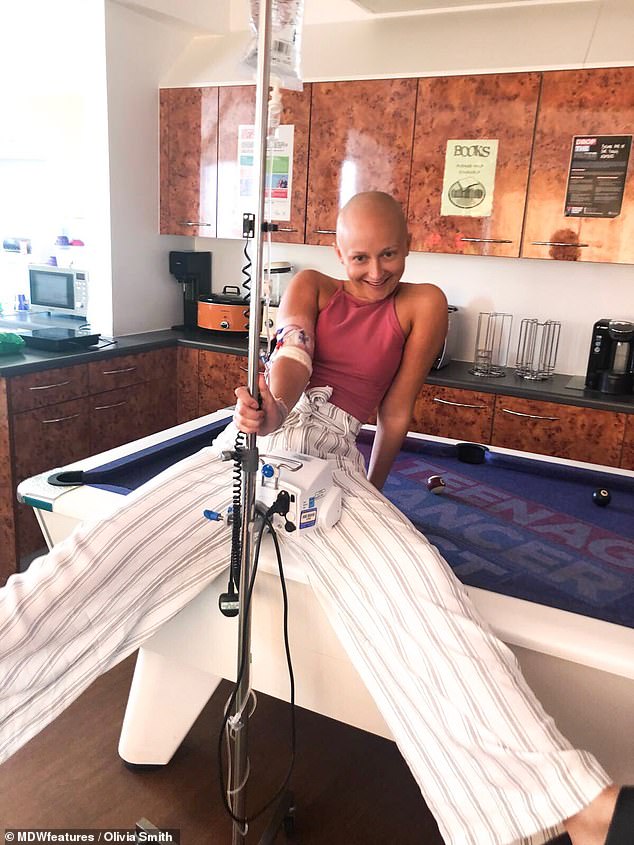 Pictured during her final chemotherapy session, Olivia has now been cancer free for seven months

Olivia began experiencing chest pains after having just a sip of alcohol while on holiday in Menorca, Spain.

WHAT IS HODGKIN’S LYMPHOMA?

Hodgkin’s lymphoma is a type of cancer that starts in the white blood cells.

It affects around 1,950 people each year in the UK.

A common early symptom is having a painless swelling in the armpits, neck and groin.

It has been linked to people with lowered immunity, a family history of the condition, smokers and those who are overweight.

Treatment may include chemotherapy, radiotherapy, steroids and stem cell or bone marrow transplants.

Doctors initially passed off her chest-pain symptoms as a result of drinking.

It was only when Olivia noticed a few lumps had appeared on her neck that she was diagnosed with Hodgkin’s Lymphoma in February 2018.

She spent the beginning of her chemotherapy sessions feeling insecure as her hair began to fall out. She had 12 rounds of chemotherapy sessions and she would use wigs to hide her bald head, but as time went on, she realised that she was battling a tough illness and wanted to embrace the journey to show she was strong.

She proceeded to ditch the wigs and post on social media to encourage other cancer fighters not to feel ashamed of their appearance and journey.

In August 2018, doctors told Olivia her treatment had worked successfully and that she was in remission.

Her Facebook group now has more than 500 members and features tips on wigs, headscarves, fashion to cover your PICC or Hickman line, makeup, skincare and scars

‘Cancer Chicks aims to keep people feeling stylish and confident through and beyond cancer. We aim to unite people who understand what one another is going through,’ Olivia explained.

‘Through my cancer treatment I always felt that I was being hugely supported in every area other than when it came down to my confidence and the huge change in appearance.

‘But I was so grateful to be able to connect with so many via my blogging, who felt the same as me, and therefore we had one another. 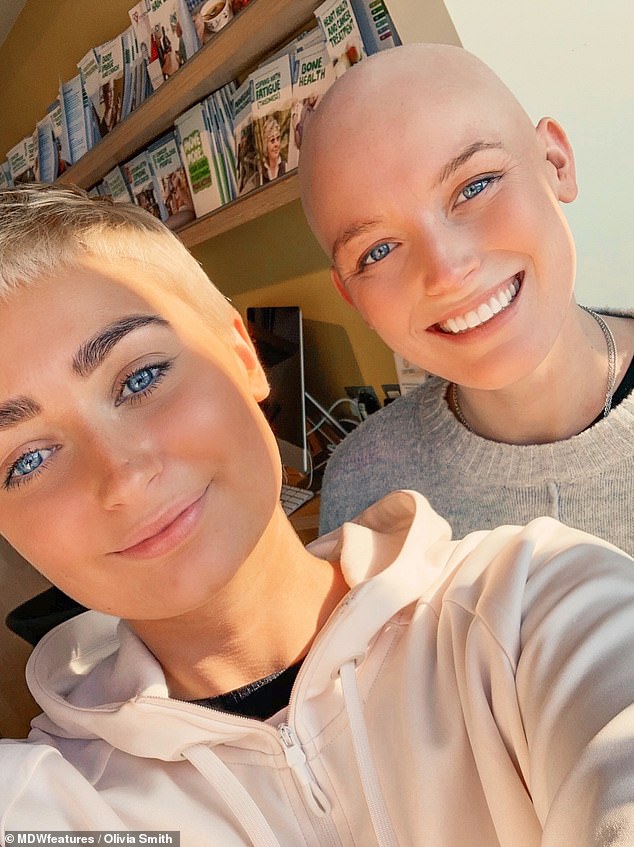 After being inundated with messages about her cancer battle, Olivia set up the ‘Cancer Chicks’ group on Facebook, and has now set up her own company. Pictured with one of her Cancer Chicks 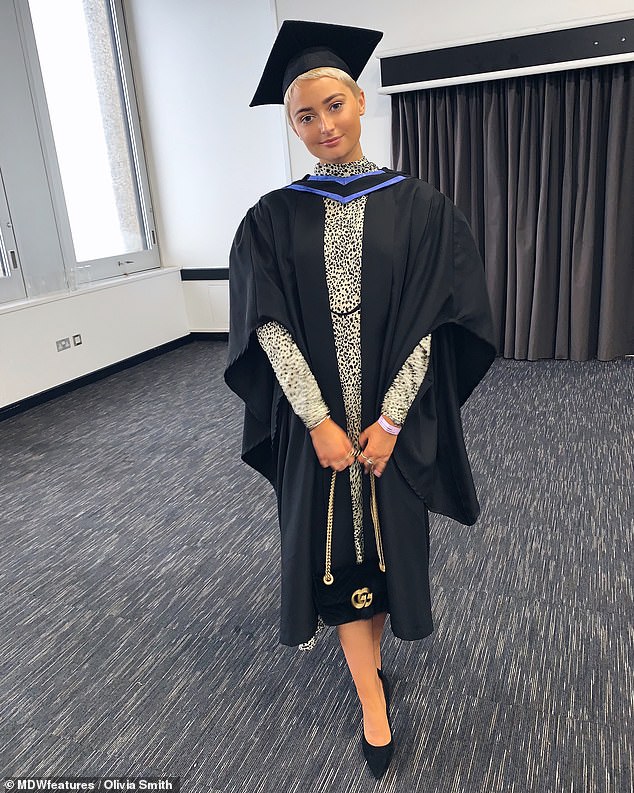 Olivia recently graduated from university with a degree in fashion communication. She posted the pictures on her Instagram, captioned:’ Better late than never eh’ 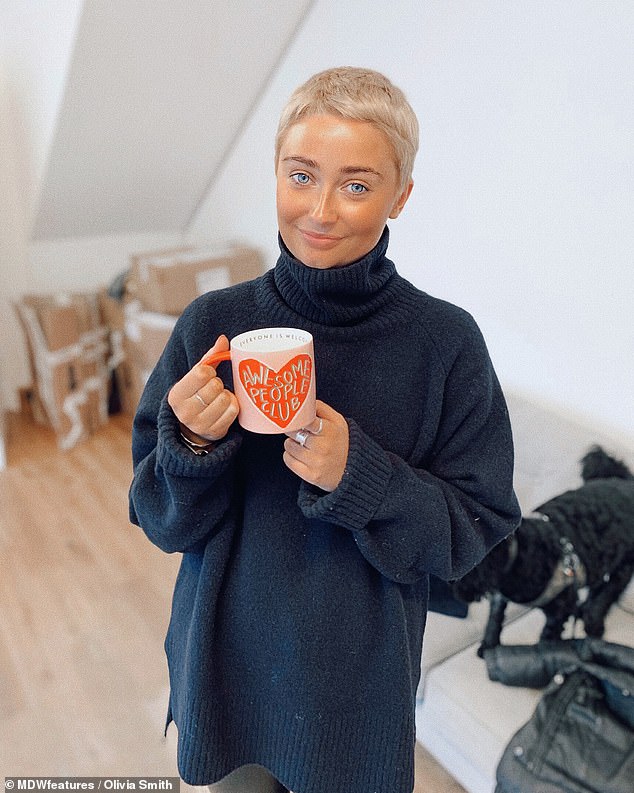 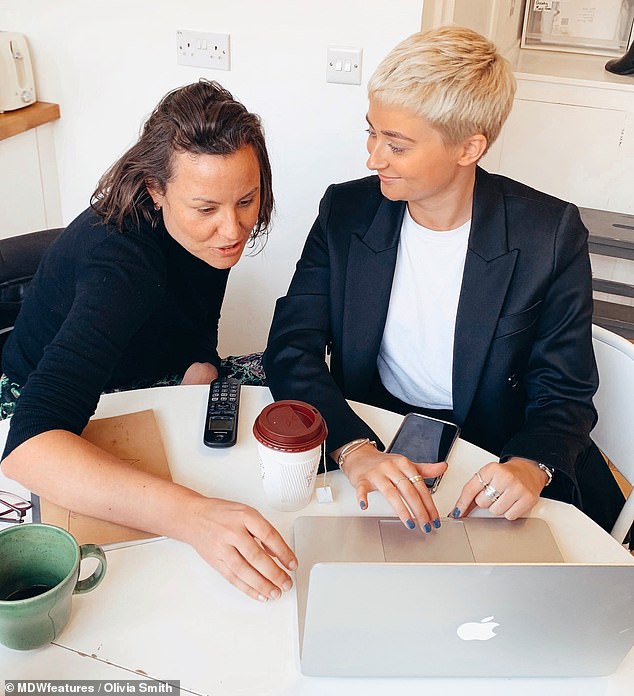 She’s now set up Cancer Chicks as a company with Trekstock, a charity that aims to help people who have been diagnosed with cancer in their twenties and thirties 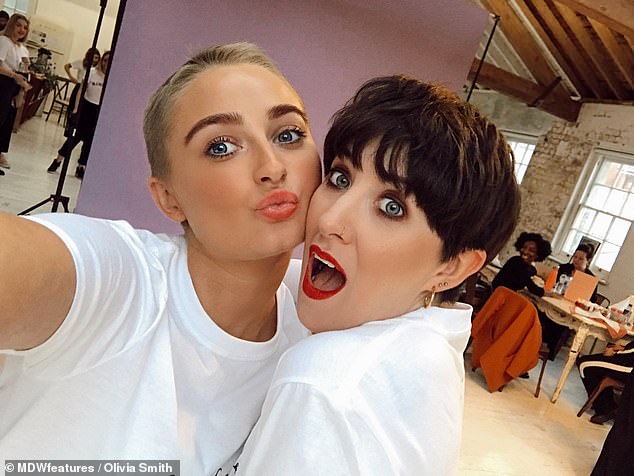 Olivia Smith with fellow cancer campaigner and broadcaster Lauren Mahon, who presents BBC’s You, Me and The Big C 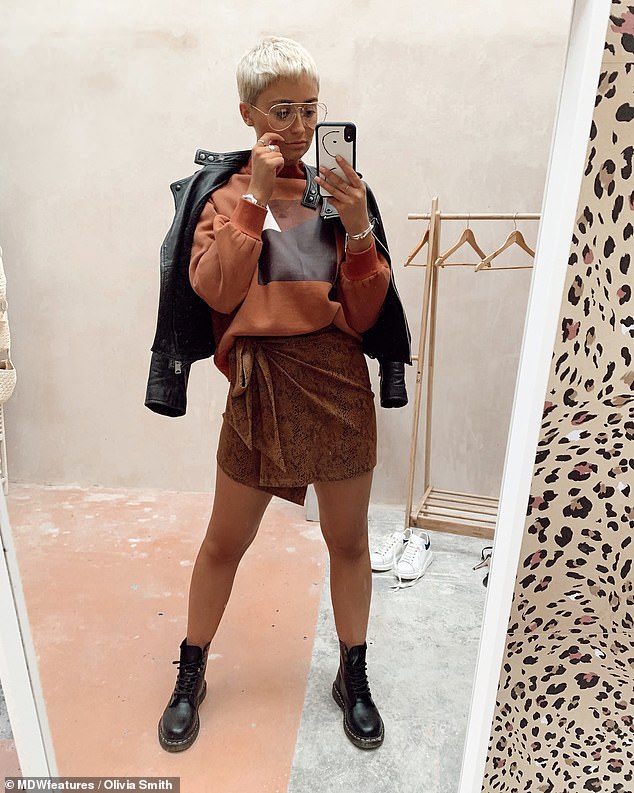 The 23-year-old currently has 35K followers on Instagram, where she shares inspiration quotes and stylish pictures

‘However, I know not everybody is in the same position as me with being able to find people via a blog, so to have this readily available is so much more accessible.

‘Trekstock came into my life when, in my second year of university, when cancer wasn’t in my life, I did a project on the charity,’ Olivia said.

‘I did lots of research on the charity and felt so inspired by the people they supported. Little did I know in a few months’ time I would be one of them, after being diagnosed with Hodgkin’s Lymphoma in February 2018.

‘Together we can provide the best possible support for young adults living with cancer in the UK. Together we will address more key issues, such as confidence, by putting on events about finding your style after facing such a huge change to your appearance. 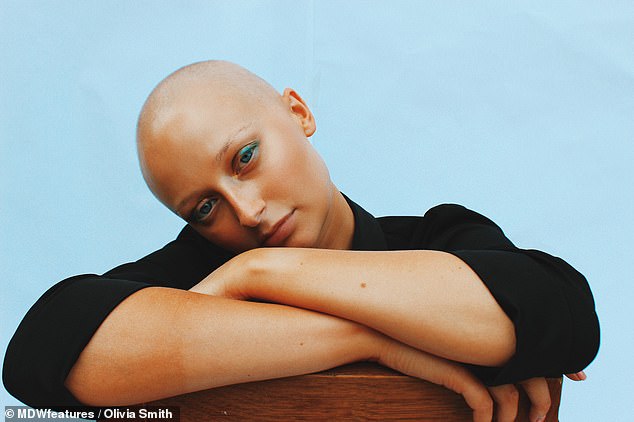 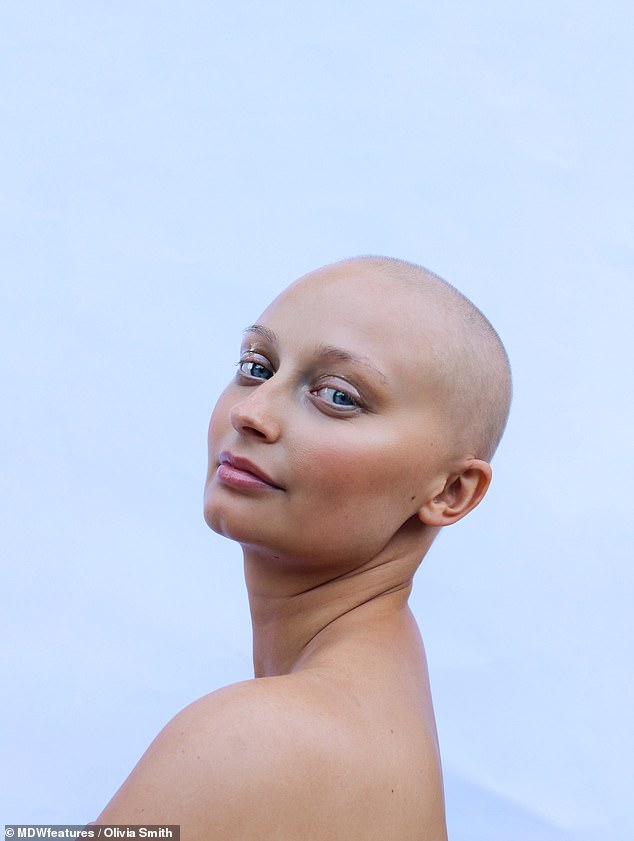 Olivia hopes she can inspire other cancer sufferers through Cancer Chicks, to embrace their baldness and provide support to other young sufferers 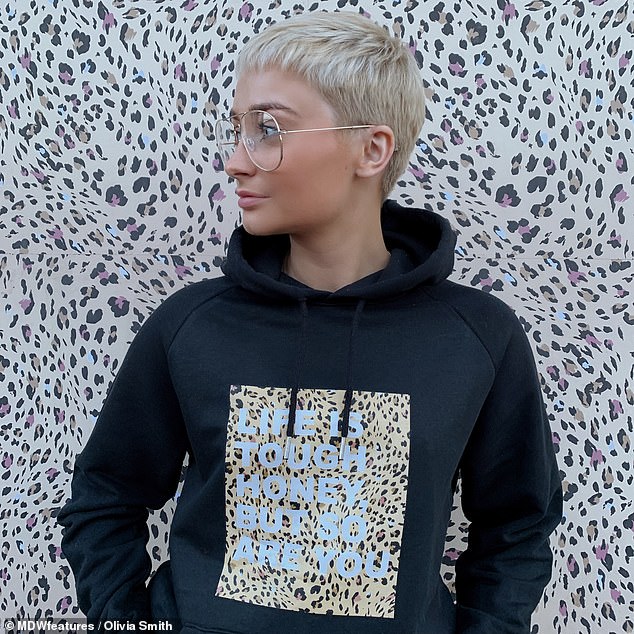 Olivia is now in remission, and her hair has started to grow again. Pictured above in January, with a new cropped haircut 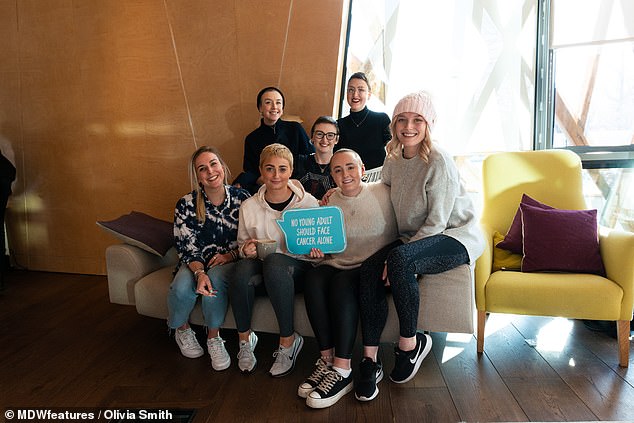 Olivia (middle) pictured with her Cancer Chicks. She was told her cancer went into remission in August 2018, and is now determined to help other sufferers

‘Cancer Chick members have commented, ‘I absolutely love this Cancer Chicks group. It’s given me so much advice and confidence through my treatment and kept me going on my darkest days.’

‘When Cancer Chicks announced its partnership with Trekstock somebody said, ‘It’s like my two best friends have gotten married..’

‘To know that I am hopefully making someone’s life with cancer more bearable makes the fact that I had cancer so worthwhile.

‘If I didn’t have cancer those five-hundred Cancer Chicks members wouldn’t have Cancer Chicks. It just makes everything worth it.

‘My life has meaning now. My favourite quote is ‘No Rain, No Flowers’, because without me going through a bit of a rubbish patch I wouldn’t have be living with such passion as I am now.’