“Whatever you do, don’t tell them it’s a wedding.” It’s long been the advice given to couples that when they begin the process of wedding planning, they should not let on to providers the event is their nuptials, to avoid having a premium slapped on the price. And it was given to me too. 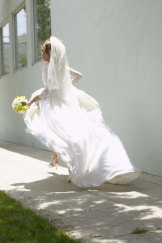 Somewhat naively, I eschewed it. I didn’t want to lie to people with whom I was doing business, especially people who would be involved in my wedding. At best, it seemed sneaky and unethical, at worst, I worried I could be in breach of contract.

After hearing so much about the so-called “wedding tax” I decided to find out if it really exists.

Venue hunting has got to be one of the most time-consuming and tedious aspects of wedding planning, so when my partner and I heard that a venue we loved was within our price range, we contacted them.

We got an idea of the price range from our friends who planned to have their engagement party at the same venue, and were quoted a $6000 minimum spend for a Saturday. However, when we contacted the place (and dropped the "W" word) we were informed it was a minimum $25,000 spend on a Saturday because they needed to “recoup our regular patronage”.

That’s a $19,000 difference in minimum spend because the event was a wedding and not an engagement.

I should not have been surprised. In 2014, Choice magazine commissioned two shadow shoppers to obtain quotes for a wedding and birthday. The requests were identical, but the quotes came out vastly differently; the wedding quote was inflated.

Melbourne hair stylist Sarah (who does not wish for her surname to be used for business reasons) confirms this approach is also taken among providers of bridal services. In more than 10 years working in the wedding industry, she has seen how the wedding tax works.

“If someone came into the salon and got a blow wave, premium price would be $100… but if you’re getting the same style and you have a wedding attached to it it’s $250 per head,” she told me.

I then tried the “white dress” test with a dry cleaner. First, I rang to ask for a quote on dry-cleaning a long, silk formal dress. I was told that the price would be around $30. I went into the same dry-cleaner and asked for a quote on a wedding dress, emphasising that it was a simple style and describing it exactly like the former. I was told the price would be somewhere between $280 and $500.

When planning his own wedding recently, Your Money presenter and business journalist Chris Kohler, also discovered that wedding tax was alive and well.

“I think it’s definitely true and I don’t think it will surprise many people to know that there is a hike when people start talking about weddings.

The average cost of an Australian wedding at $31,368 – which represents almost a 12 per cent increase in two years – so Kohler empathises with the costs and stress most people face during the wedding planning process.

“Wages are not increasing at all … and inflation in the wedding industry seems to be taking off very quickly," he says. "It’s not getting any easier for people who want to have the wedding that they’ve always pictured.”

But who is to blame for this hike in cost? Kohler believes the answer could lie with us just as much as the wedding industry.

“I think it’s social media. Our parents’ generation had a few pictures on the wall and in photo albums, and our generation broadcasts them to everyone we’ve ever known.”

Sarah the stylist agreed that the way we use social media is in large part to blame for ballooning costs.

Our parents’ generation had a few pictures on the wall and in photo albums, and our generation broadcasts them to everyone we’ve ever known.

“People these days are so competitive. I think it’s got a lot to do with Instagram to be honest, because people want to buy the dream, the dream wedding.”

This doesn’t mean the wedding industry is off the hook. While social media may be the cause of added pressure around a couple’s big day, the exploitation of this stress is surely unethical.

Kohler breaks it down to a lack of honesty around how the industry communicates to consumers.

“I think the lack of transparency is what bugs people in this whole process … For [vendors] to say ‘Look we’re charging you extra but it’s because of the following reasons and we understand you have a right to know why’ I think that’s a step that’s often missed.”

Responding to this issue of price hiking, a spokesperson from the Australian Competitor and Consumer Commission stated: “Businesses are generally free to set the prices for the goods and services they supply as they see fit, but they must set their prices independently of their competitors and any representations they make about applicable prices should be clear and upfront and not mislead consumers.”