Out on the chilly waters around the Tasmanian coast you'll often find a small but dogged fishing fleet working hard to haul up live lobsters for restaurants around Australia and – mostly, these days – China.

With a single lobster able to fetch well over $100 at the docks, lobster fishing might seem like a licence to print money. But as Aussie Lobster Men has shown, that isn't exactly the case. 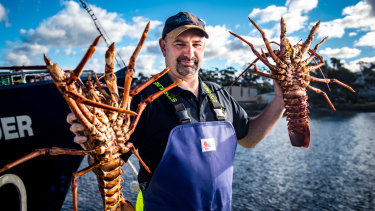 Brendan “Squizzy” Taylor has been catching lobster for 27 years and says the job has its ups and downs.Credit:Discovery

Lobster man Brendan "Squizzy" Taylor happily admits to loving his job, but the overheads are huge, and when he's under the financial hammer and his pots start coming up empty – or are full of lobster killed or disfigured by octopus – it's not a lot of fun. But at least Taylor gets to enjoy grilling up some fresh octopus for himself, right?

"I do bring one or two home now and again. My son puts them on the barbecue, but I don't eat 'em. They're a nasty pest for us and they cost us a lot of money. This season was one of the worst for octopus I've ever seen. Some years there's lots of certain species around, and this was one of those years for octopus."

The octopus arrived at a particularly difficult time for Taylor.

"At the start of this season I'm under huge financial pressure. If I don't catch my target I'll have to mortgage the house to pay a few bills," he says. "We have a pretty good start, but then we fall into a hole so the pressure just mounts. There were a few sleepless nights. You can imagine when you're running a business and things are bit tight and you're thinking about mortgaging the family home. The wife wouldn't be real happy, would she?

"It's highs and lows. I do get excited when I get a good pot, and I get down when things aren't going well for us, that's for sure. I do feel the pressure because I've got the [deckhand] there, Tabor, and if I'm not catching fish he's giving me a dirty look and he's doing all the work for nothing."

Of course, Taylor does know what he's doing. He has been catching lobster for 27 years, 12 of those as a deckhand and 15 as skipper of his own boat. And he certainly remembers that being a deckhand is hard yakka.

"I remember leaving school, jumping on a cray boat, going around the west coast for seven or eight days," he says. "I was seasick for three days non-stop, had to work 18 hours a day and I remember thinking, 'I can't do this. This is way too hard. I can't do it physically or mentally.'

"I went home, got my first pay cheque. I had $1200 clear. I was sitting at the parents' kitchen table … and Mum and Dad said, 'That's more than what we earn a week between us.' I sort of poked my chest out and started feeling pretty good, and Mum said, 'Now you can start paying rent.' " 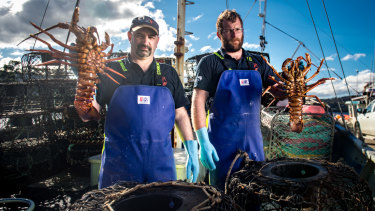 Taylor, left, happily admits to loving his job, but the overheads are huge and when his pots start coming up empty – or are full of lobster killed or disfigured by octopus – it’s not a lot of fun.Credit:Discovery

Even from the relative comfort of the captain's chair, there are challenges in being out at sea so long.

"Me and Tabor, we're on a 60-foot [18-metre] boat and there's two of us for two weeks. Tensions do get pretty high," Taylor says. "You have those days when you just go 'I'd just like to hide away from this bloke. I'd just like him to shut up and have some peace and quiet and go do a bit of de-stressing somewhere by myself.' But you can't, the only place you can go is sit in the toilet for a time-out.

"And a good deckhand makes you money, there's no doubt about that. If you've got a bad one, your business doesn't go very far at all. When I'm under pressure I seem to take it out on him a little bit, which is not good. But I always apologise. The other downside is you miss out on a lot with family. I missed my daughter's first three birthdays."

But there are also laughs to be had at sea, especially when you're getting one over your friends and rivals in the fleet.

"We have a lot of jokes, stir each other up," Taylor says. "If I'm catching fish [lobster] I tell them bullshit until we get home and unload and then I tell the truth. Otherwise, if you're catching fish you'll have boats all around you. They know not to believe what comes out of Squizzy's mouth over the radio.

"You appreciate the nice days. When it's nice and calm and blue sky it's probably one of the best jobs in the world. But when it's rough and the working conditions are dangerous you've got to be a hard nut to do it. It's not for everyone."