Let’s face it: There was nothing like waking up on a Saturday morning as a kid and spending hours binge-watching cartoons with a bowl of cereal at hand. TBH, one of my favorite cereals to eat during those SpongeBob SquarePants marathons was always Lucky Charms. Unfortunately, I haven’t eaten the "magically delicious" ‘mallows in a while, but it looks like I’ll be tasting them again soon. However, it won’t be in the form of cereal — it’ll be in the form of beer. That’s right: The Saturday Morning Marshmallow IPA By Smartmouth Brewing was literally brewed with Lucky Charms marshmallows, and it’s coming to bring major nostalgia to your happy hour.

If you like Lucky Charms (or marshmallows, for that matter), I have a feeling that you’ll enjoy the exclusive new brew. The masterminds behind it hail from Smartmouth Brewing, a brewery with locations in both Norfolk, Virginia and Virginia Beach. The company provided Elite Daily with a few details about the Saturday Morning Marshmallow IPA, including the types of hops used throughout the brewing and the ingredients that were involved.

I’ll start with the ingredients. I know I already mentioned this, but I’ll say it again: Smartmouth Brewing used actual Lucky Charms marshmallows while brewing its Saturday Morning Marshmallow IPA. As someone who loves both marshmallows and IPAs, I’m really psyched.

Those aren’t the only marshmallows that the company used while brewing its nostalgic beer, though. Smartmouth Brewing tells Elite Daily that brewers also used "toasted marshmallows" throughout the process. (Hey, the more ‘mallows, the better… right?)

The brewery also pointed out which hops were used while brewing the IPA, and those include both "galaxy and calypso hops." After doing some research, I found that galaxy hops provide citrusy flavors to the brew, while calypso hops emit both citrusy and fruity flavors, per MoreBeer.com. With that being said, I can imagine how well those hops would compliment a beer infused with fruity Lucky Charms marshmallows. 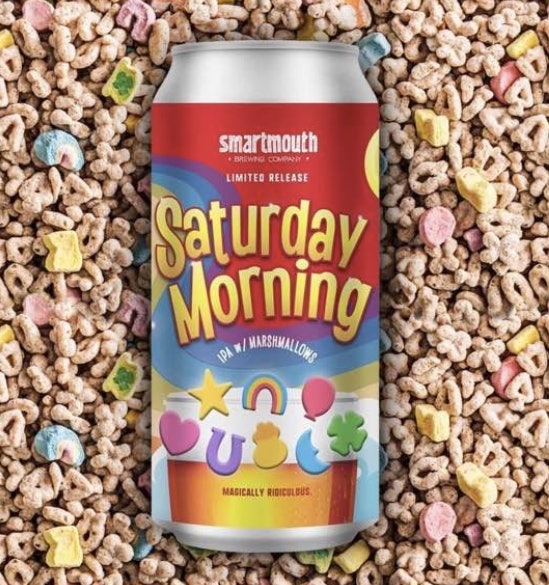 Now that you know what kind of ingredients went into Smartmouth Brewing’s Saturday Morning Marshmallow IPA, you’re probably wondering how strong it is. Elite Daily reached out to the brewery and asked for its ABV percentage, but hasn’t heard back by the time of publication. However, the average ABV for an American IPA falls within 5.5 to 7.5 percent, per Beer Advocate. With that being said, drink it responsibly (even if it’s just as "magically delicious" as the OG cereal).

If you’re hoping to give the nostalgia-inducing beer a try, you can head to Smartmouth Brewing’s Norfolk location on Saturday, March 2 for its big debut. Based off of a brewery flyer provided to Elite Daily, there will be a handful of on-site events happening that day to welcome in the new beer. Some of those events include a Super Smash Bros. Tournament, a Cosplay Costume Contest, Nerd Night Trivia, and live music to end the night with. 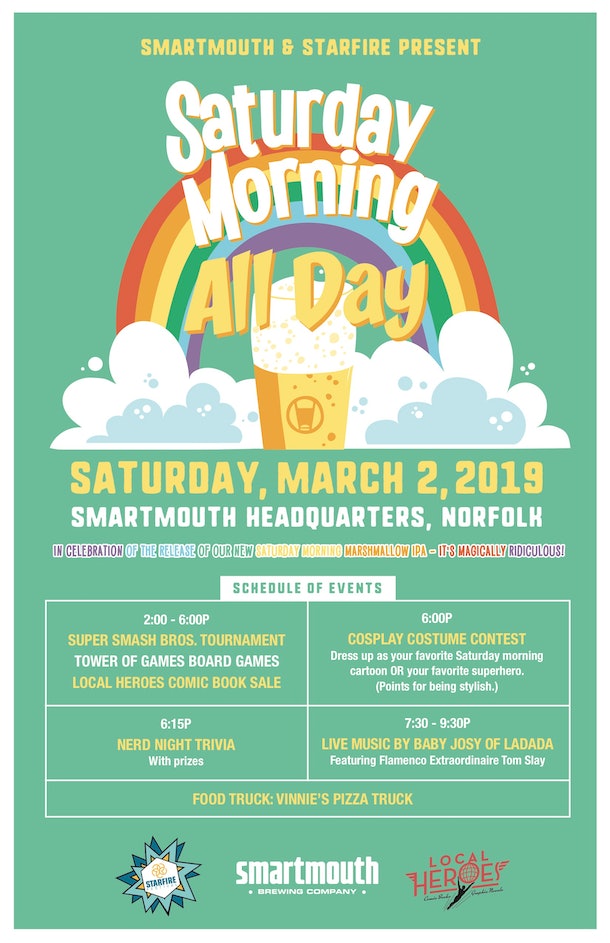 If you aren’t able to swing by the brewery on March 2 (or after, for that matter) — you may or may not be able to try the brew. It all depends on whether or not you’re willing to take a road trip. According to the brewery, the IPA will be sold on draft and in 16-ounce cans throughout the state of Virginia after its release — and if you visit, you’ll be able to find it in bars, restaurants, and beer aisles at the grocery store.

Regardless, cross your fingers that you’ll be able to score a Saturday Morning Marshmallow IPA while it’s available — and if you cant, you might have to settle for a handful of marshmallows, instead.