By this time tomorrow, Grey’s Anatomy will officially become the longest-running medical show on television, ousting its predecessor ER from its first place spot. It’s a monumental accomplishment and something the cast and crew should be very proud of. But as a fan who started watch the series from the very beginning, this milestone is prompting me to look back on all the times this show made an impact on my life. Sure, deep down I’m a logical adult and know that this series and these characters are purely works of fiction, but some of these storylines have been so compelling at times, it’s impossible not to become invested in them, even all these years later. In fact, there’s one Grey’s Anatomy case that I’ll always vividly remember. Even to this day it never fails to fully shake me to my core.

The case I’m referring to takes place in Season 2, Episode 6 and it’s titled "Into You Like a Train," which some fans may immediately recognize just from that information alone. But just in case you don’t have every episode memorized (that could totally just be a "me" thing), let’s refresh our memories a bit.

The episode centers around a horrible train crash that takes place in Seattle and sends numerous passengers to the hospital for treatment. Among the injured are two strangers, Bonnie and Tom, who were both impaled by a metal pole when the crash occurred. It’s impossible to treat either of them until one of them is removed from the pole. The problem with that is that whoever gets removed stands a more likely chance of not surviving since the pole is currently plugging the wounds, preventing them from bleeding out. 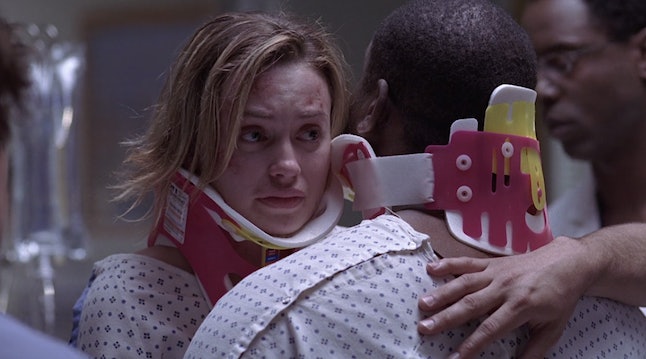 Since Tom is older and has lived a longer life, he offers to sacrifice himself in order to save Bonnie, who is much younger and engaged to be married. However, when Bonnie’s injuries are determined to be much worse than Tom’s, the doctors decide that the best course of action is to move Bonnie from the pole instead. It gives Tom the best chance of surviving, whereas Bonnie will most likely die either way. It’s a devastating realization, compounded by the fact that her fiancé is unable to be there to say goodbye. And despite all the doctors’ and interns’ best efforts, Bonnie doesn’t end up making it.

Of course, this description doesn’t nearly do the episode justice. The way the characters are portrayed makes them instantly likable to both viewers and the doctors attempting to save them. You immediately become invested in their lives, which makes the loss of Bonnie at the end all the more heart-wrenching. You wouldn’t think you’d come to care about people so much within an hour’s time, but that’s where Grey’s Anatomy always shines. The people are so innately human and relatable that it’s easy to picture your own loved ones in their place and how terrible it would be to see them go through something like that.

Grey’s has produced some truly sob-inducing episodes throughout the years to the point where I should really think about investing some stock in Kleenex. But this one case in particular has always stayed with me. The genuine sorrow Tom felt for this complete stranger, knowing how unfair it was that one of them needed to be sacrificed for the other to make it. The way Bonnie comforted him as she gradually made peace with her impending fate. The music that played as the surgeons pulled Bonnie off the pole. It was all so perfectly executed that your eyes can’t help but well up with tears.

This episode showed the best and worst parts of what it means to be human and how the kindness of strangers can help you through your darkest hours. Which is always the sort of thing Grey’s Anatomy does best.