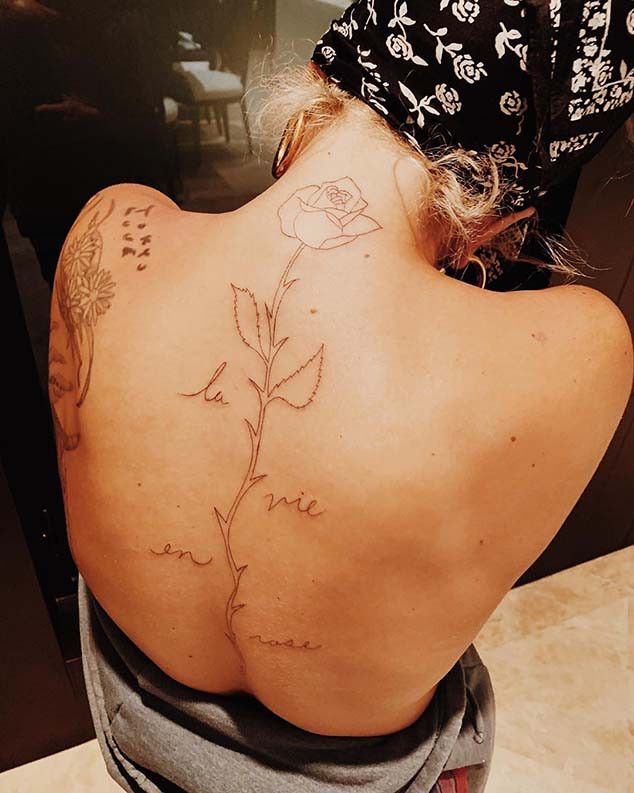 Lady Gaga‘s A Star Is Born success will follow her always.

The 32-year-old singer and actress got a tattoo of a rose inked on her back, with the words “La Vie en Rose,” a reference to French singer Édith Piaf‘s signature song, which Gaga’s character Ally sings in Bradley Cooper‘s movie remake just before she meets his character, Jackson Maine. Cooper, who makes his directorial debut with A Star Is Born, cast Gaga in the leading female role after watching her perform “La Vie en Rose” at the opening of the Parker Institute for Cancer Immunotherapy at Sean Parker‘s house in 2016.

The meaning of the words, loosely translated, is “life in pink,” i.e., to view life through rose-colored glasses.

“Happy Valentine’s Day,” Gaga wrote on Instagram on Thursday, alongside a photo of her new back ink. “A tattoo toast to ‘la vie en rose’ by the beautiful @winterstone my spinal cord is now a rose.”

Cooper and Gaga are both nominated for Oscars for their acting performances in A Star Is Born. The movie is also nominated for Best Picture and a few other awards, including Best Original Song for the actors’ duet “Shallow.” The 2019 Oscars will take place on February 24.

Last weekend, Gaga and Cooper won two awards for “Shallow” at the 2019 Grammys. He was unable to attend the show but she did and also performed the track onstage.

“G A G A…and when you get a tattoo and you’re me you always have to get two,” she wrote. “Also by @winterstone and also a matching tattoo w my bestie and manager @wanaynay and major malfunction were missing staff line…too many tequilas!!!”