Who doesn't remember being terrified and nervously glancing around the schoolyard hoping to lock eyes with someone, anyone, who might be willing to be your friend, and hoping against hope you’ve chosen well because there’s a good chance you’ll be stuck with each other for the next seven years?

Yep, it’s the first day of school – and it’s just as terrifying for the parents dropping their kids off as it is for the kids themselves. And that’s the premise of the very funny web series The Drop Off, the second season of which has just dropped on Facebook. 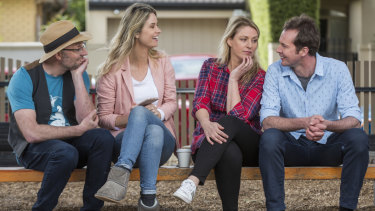 McLeish and Harris have two daughters, aged 15 and 11, and by the time the younger one was ready to start primary school the older one had already been to four different schools because McLeish had been touring the country with the stage shows Keating and Shane Warne: the Musical. And that meant the couple had made, and said goodbye to, four lots of drop-off friends.

"So when we started at the new school I was kind of done," says Harris. "I was like, 'No, I'm not making any more friends'. And then, of course, we just met really awesome people that we clicked with instantly and the next thing you know we've got these friends we know will be besties for life."

So, not The Slap then?

"We were lucky," she says. "We didn't experience any of the kind of nasty, bitchy politics that you see sometimes reflected in TV shows about parents or schools, and we wanted to reflect our positive, slightly inappropriate conversations and experiences."

In the new season there's also the rather shocking sight of everyone's favourite Australian schoolgirl, Pia Miranda (Looking for Alibrandi), as the adult Nicola McGinty, terrifying organiser of fundraisers and keeper of spreadsheets. A schoolyard bully, in other words.

"She may very well have been inspired by someone we met along the way," admits Harris.

"She's got a devil inside," adds McLeish of Miranda. "Those big eyes, that smile – it's all a front." 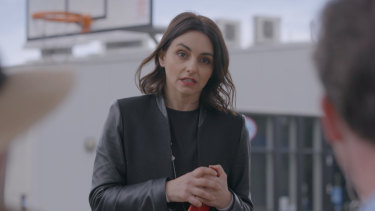 The couple are hoping there's plenty more life yet in their little show, which has racked up more than 100,000 views mostly on word of mouth. They are hard at work on a Drop Off novel for a British publisher, and hope to make more series down the line.

"We have fallen deeply in love with all the characters," says McLeish. "We absolutely love writing for Christie and Scott, and we've got a whole raft of ideas for future episodes."

For now, the series lives only on Facebook. But if a broadcaster saw in it the potential to be the next Katering Show, which crossed over from the web to the ABC?