Things are heating up on this season of The Bachelor, and with only three contestants still in the running, it’s starting to get real. This season’s bachelor, Colton Underwood has already met his final three ladies’ families and asked for their blessings to possibly propose to their daughters. It’s been a wild ride, but considering the final three ladies, Tayshia and Colton’s body language on The Bachelor definitely seems to indicate that the California girl might be the one for Underwood.

Underwood and Tayshia have certainly had a lot going for them. They’ve been bungee jumping together, skydiving together, and even had a quiet night at Underwood’s home in Denver, proving that they don’t need excitement to bond. In fact, one might argue that the couples’ date in which Underwood and Tayshia simply cooked dinner together and then sat down in front of the television to eat was the sweetest date of the season.

Now, as the ladies and Underwood head into the fantasy suites week, viewers are even more invested in what will happen, and who will make it to the finale. While Tayshia’s family was definitely protective of her during the hometown date, Underwood ultimately gave her a rose.

So, before they head into the fantasy suites and Underwood finally jumps that fence, let’s break down their body language during their hometown date, because it’s worth investigating. 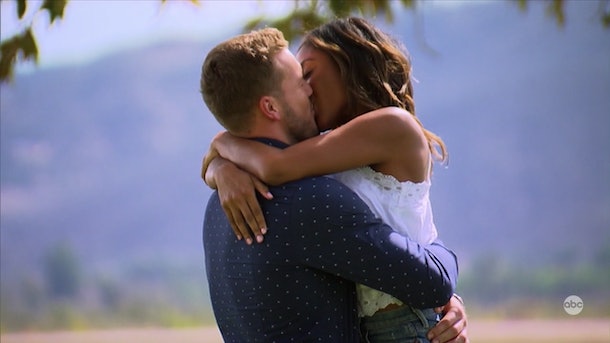 At the start of their hometown date, Underwood and Tayshia met at a park before heading off on their grand skydiving adventure. In those first moments together, it seems quite obvious that they’re totally into each other. "Sweeping Tayshia off her feet so Colton can kiss her is swoon worthy!" body language expert Blanca Cobb tells Elite Daily. "When you pick up your woman then there’s only one way to get… super close. Look at their hands, all relaxed, which indicates that they’re enjoying the moment."

And really, it keeps getting better for these two.

2After all the excitement, things heated up. 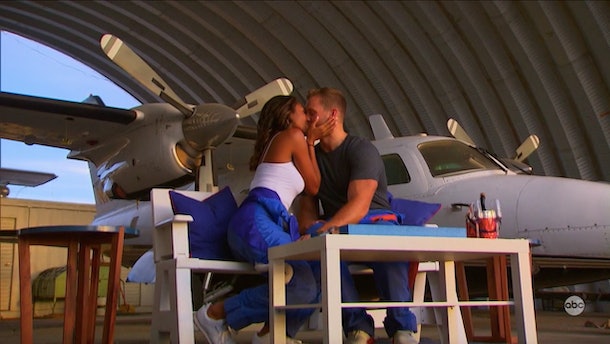 After the couple landed from their skydiving excursion, they took a second to relax and lock lips. This was when Tayshia told Colton she was falling in love with him, and he told her he realized he felt the same way after she left his apartment in Denver. According to Cobb, Tayshia seems very into this moment, but Colton’s hands (one in his lap, one on Tayshia’s leg) could indicate a more lax attitude here.

"Not only is Tayshia leaning toward Colton, but she’s also grabbing his face as her lips kiss his," Cobb explains. "What an incredibly sensual move! Colton’s got his hands on his lap, which is a bit disappointing. Don’t know how he could his hands off of her after her loving gesture." Underwood might not have been as into this moment as Tayshia was, but he might have just still been recovering from the rush of jumping out of an airplane! Either way, it looked sweet.

3They seem to be on the same page, too. 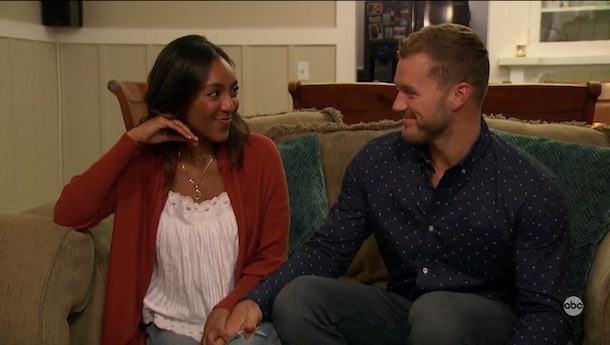 After their date was winding down and they were at Tayshia’s house with her family, Underwood asked her father for his permission to possibly propose to Tayshia. After her father gave his blessing, the two looked at each other and smiled, a clear sign that they’re happy with this development. "When you’re emotionally in sync with your partner, your body language tends to mirror each other’s," Cobb explains. "Look at their smiles; they’re almost mirror images of each others. Colton has his hand on Tayshia’s thigh, which is a bit sexy and territorial. With her hand gripping his [it] says that she’s not letting him go anywhere."

Clearly, they’re excited about the possibility of spending their lives together, and that shows in this moment.

4Even with bad lighting, they spice things up. 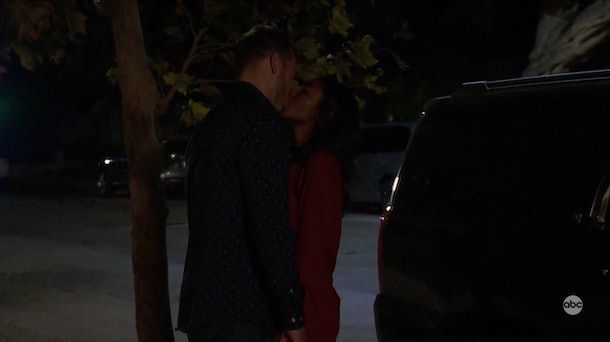 At the end of their hometown date, Underwood and Tayshia said their goodbyes outside, and they were definitely feeling the heat. "Although it’s dark outside, you can still see that this couple likes to get super close when they kiss," Cobb says. "That’s hot!"

Even toward the end of their time together, they were totally into each other. There’s really no telling who Underwood will end up with, or if he’ll end up with anyone (don’t forget the fence, people!), but it definitely seems as though Tayshia has a good chance of winning his heart.