SUBWAY has ditched 12 items from its menu, including its popular ranch dressing, taco beef, and peppered cheese, and fans aren't happy. 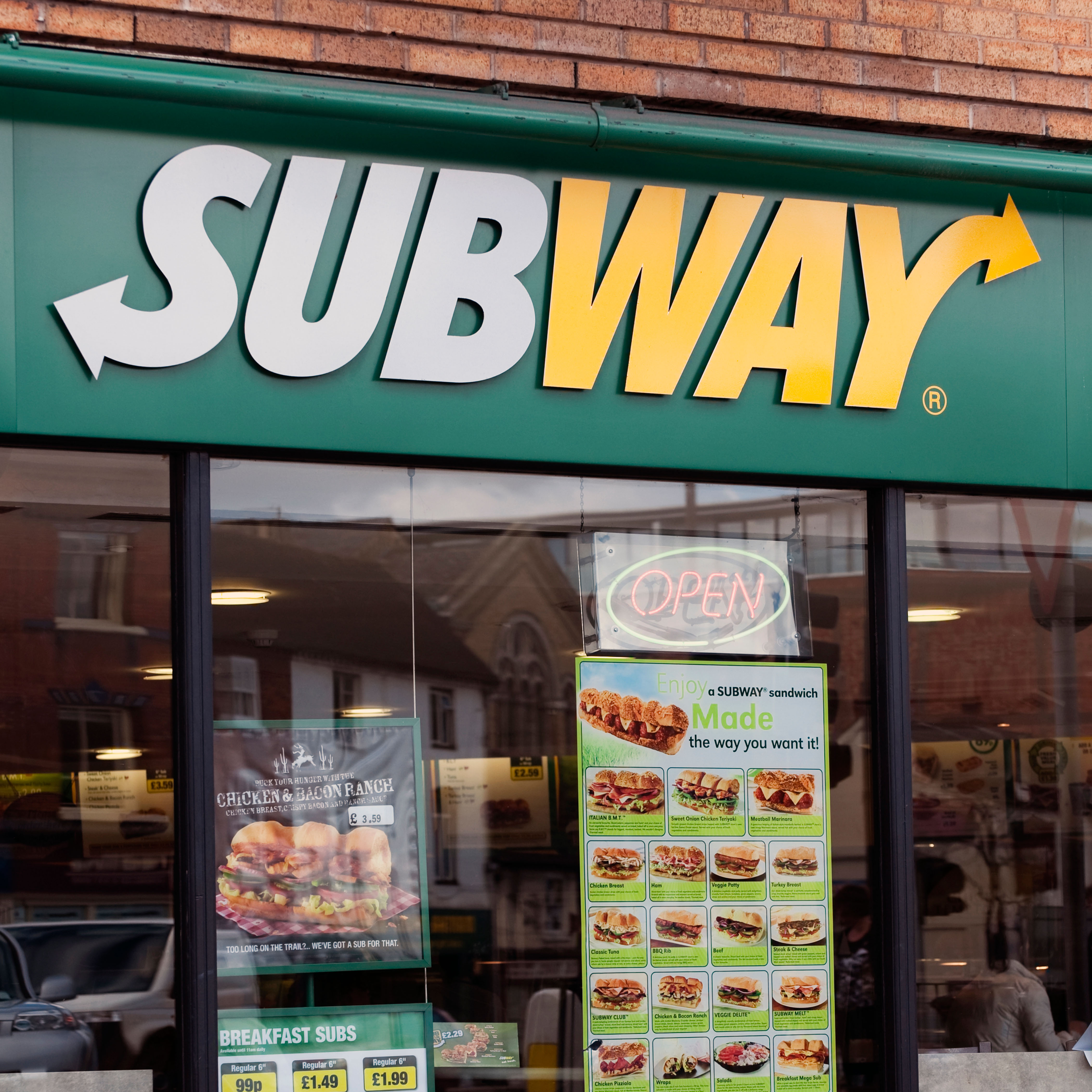 But this means ingredients from its build-your-own menu, such as peppered cheese and Monterrey Jack cheese, have quietly disappeared, being replaced with a mozzarella and cheddar cheese mix.

Also on the hit list is Subway's deli mustard and ranch dressing, which have been dropped in favour of garlic aioli and vinaigrette dressing.

While its taco beef filling has been replaced with a whole host of vegetables, including diced beetroot and crisp onions.

And the ditching of Subway's ranch dressing and peppered cheese, in particular, has got fans up in arms.

What items has Subway ditched?

HERE'S a round-up of the 12 items Subway has ditched:

One wrote: "@SUBWAY So you give a few new sauces and flavours but why take away what your regulars want – I tried three different sauces and have to say you can't do it without ranch sauce so with that said, do you plan on bringing it back? Sauce is key #Ranch"

Another commented: "Fail for Subway to not be doing ranch dressing anymore @SUBWAY gutted #subway #ranch"

Someone else said: "Hi Subway, why did you get rid of ranch dressing? There’s barely anything one can now have with a salad bowl – I don’t want sriracha on my salad!"

And another tweeted: "Legit having THE WORST day to be topped off by the f***ing liberty that @SUBWAY have stopped doing ranch dressing. LIVID."

Another unhappy ranch fan added: "@SUBWAY why have you guys got rid of the ranch sauce? Such a delicious sauce to go with my tuna salad! Come on guys bring it back." 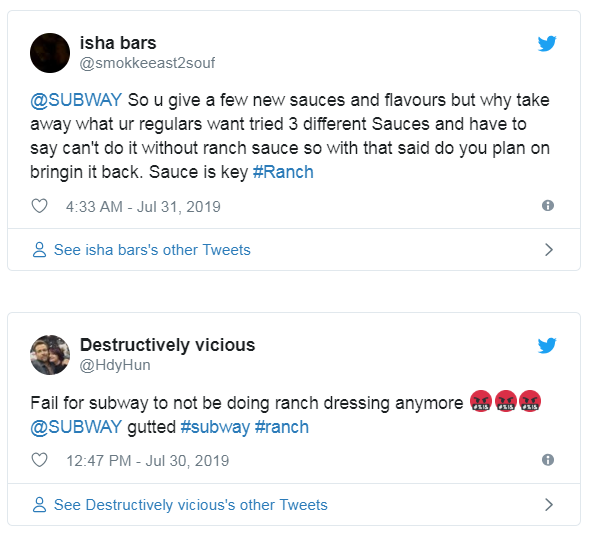 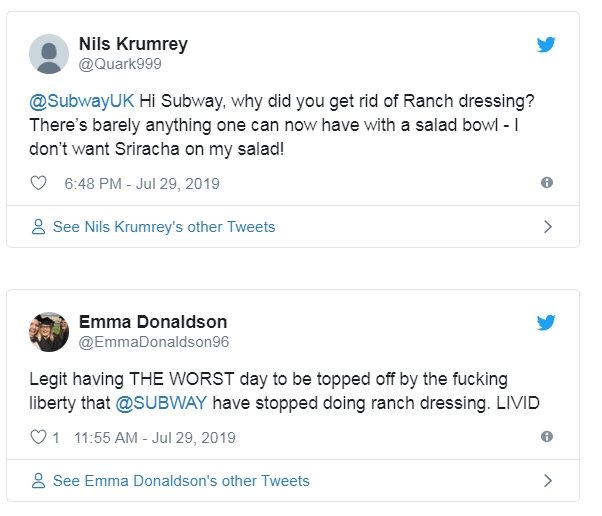 Others tweeted: "So @SubwayUK has got rid of pepper jack cheese!!! What the hell was you thinking Subway!!!"

While another said: "Who tf told @SUBWAY that they could get rid of pepper jack cheese?!?!" 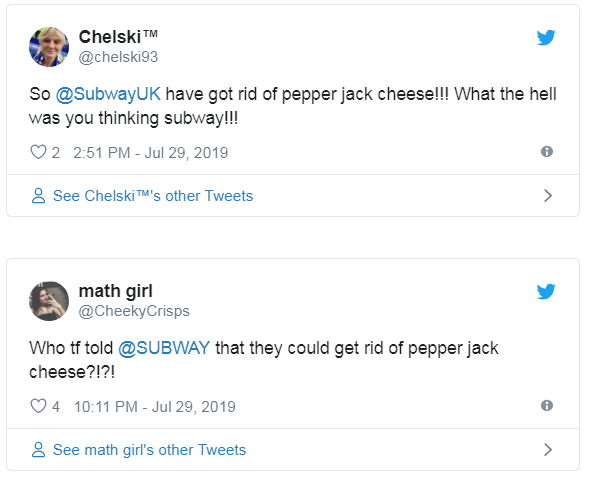 Subway's raspberry cheesecake has also been ditched unceremoniously with no replacement desserts.

While Subway's veggie patty has been replaced with its new vegan patty.

If you opt for the vegan sub it does come in slightly healthier though, with 371 calories compared to the veggie patty's 379.

An adult man should consume around 2,500 calories a day, according to NHS guidelines, while it's 2,000 for a woman.

But fans of the veggie patty aren't pleased by the shake-up. 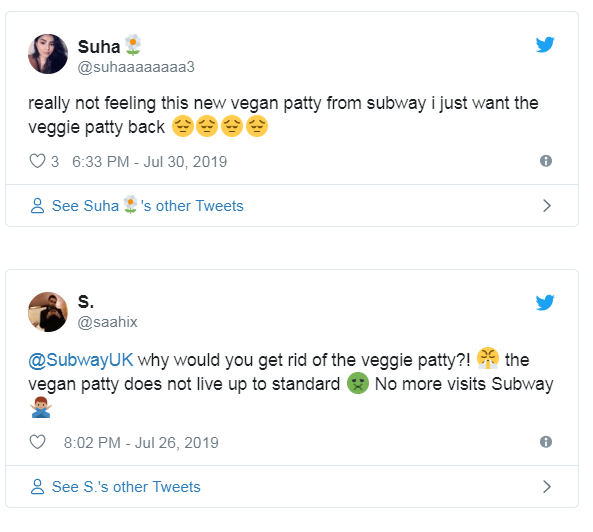 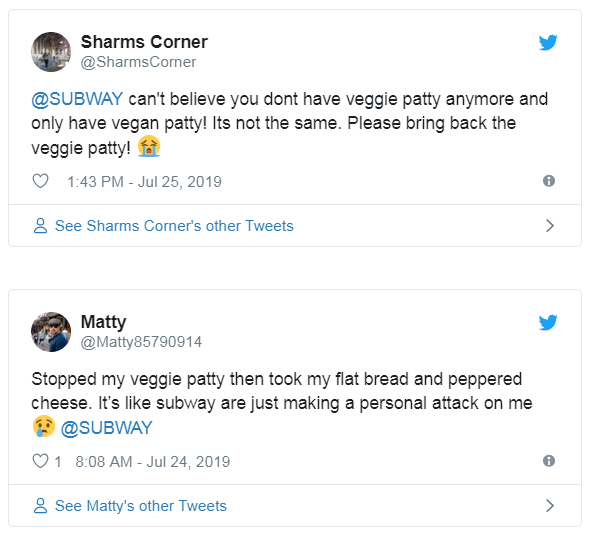 One person wrote on Twitter: "Really not feeling this new vegan patty from Subway, I just want the veggie patty back."

Another commented: "@SubwayUK why would you get rid of the veggie patty?! The vegan patty does not live up to standard. No more visits Subway."

Someone else added: "Can't believe you don't have veggie patty anymore and only have vegan patty! It's not the same. Please bring back the veggie patty!"

Another Subway fan is unhappy about a lot of the changes, saying he misses the flatbreads, peppered cheese and veggie patties.

He tweeted: "Stopped my veggie patty then took my flat bread and peppered cheese. It’s like Subway is just making a personal attack on me."

What is Subway adding to its menu?

HERE'S what Subway is either adding to its menu or which existing ingredients it's improving:

A spokesperson for Subway said: "We’re adding lots of exciting new menu options and there are more to come.

"This meant we had to say goodbye to some of our less-loved ingredients from our past range.

"We really hope our customers will find some exciting new options that they love.

"We’re always listening to our guests for what they need from us next – so customers can head to our website to let us know what they want."

The new menu options are available now in Subway's 2,447 stores across the UK, although as Subway operates as a franchise it means prices and offers may vary by store.

Use Subway's store locator tool to find your nearest.

We've asked Subway for the calories in its new menu and we'll update this story as soon as we get a response.

Subway withdrew its veggie patties for a limited time last year amid fears they contain plastic.

For more top deals, here's our round up of nine ways you can get food and drink on the high street without forking out the cash.