The Andrews government's $1.8 billion Western Roads Upgrade has stalled after a key subcontractor walked off the job with just $920 remaining in its accounts, leaving other subcontractors millions of dollars out of pocket.

The Sunday Age can also reveal the head contractor on the project, South-African headquartered and Perth-based WBHO, has reported $133 million in losses after it admitted to under-bidding to win the work, and its executive chairman, Louwtjie Nel, conceded the project was the company’s “biggest error in 50 years”. 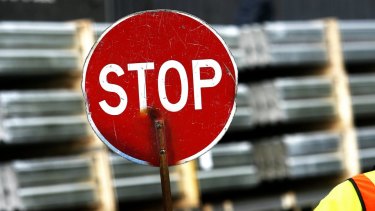 The problems on the Western Roads Upgrade, which involves upgrading eight roads in Melbourne's west and maintaining more than 260 kilometres of road from Footscray to Werribee, have prompted the government to abandon plans for future private-sector partnerships on its next package of arterial road upgrades.

Suppliers have accused the government of being complicit in awarding a contract to contractors that were not capable of delivering the project and called for it to step in to rescue the unpaid companies and staff.

The liquidators’ report finds Civilink owes $13 million to 232 businesses, with little prospect of the creditors being repaid.

The subcontractor appears to have no track record of managing large and complex infrastructure projects, listing on its website roadworks for a retirement village, works linked to a warehouse site at Melbourne Airport, and drainage, sewer and water works for a residential development among six projects it has worked on.

A government database of contractors approved to work on public projects licenses Civilink to take on projects up to $2 million. Instead it was handed contracts for $48 million of building works.

Civlink's upgrades on Derrimut Road, Tarneit, were due to be completed by the end of the year but will now not be finished until early next year.

The Western Roads Upgrade was the first suburban arterial roads package in Australia built under an "availability" public-private partnership, in which the private sector takes on the risk and builds infrastructure, then receives rent from the government for its use and maintenance over the next 20 or more years.

It was to have served as the model for another $2.2 billion package of suburban road upgrades in Melbourne’s north and south-east, but the problems have prompted the government to ditch that plan.

However, the main contract on a far riskier and more expensive project, the $15.8 billion North East Link, is still intended to be a public-private partnership.

Seven underpaid suppliers on the Western Roads Upgrade have told The Sunday Age funds stopped flowing from CiviLink around June. Many of them stopped working in protest, while smaller businesses had to let go of staff.

CiviLink has now been named as a defendant in 13 cases in the Magistrates Court and four in the County Court over unpaid work, including a $1.2 million claim by clay and concrete giant Boral which was upheld by the County Court.

Jean-Paul Cellier’s business, STA Traffic, did 12 months of paid work as a subcontractor for Civilink on Derrimut Road until early this year, when the money stopped amid a flurry of “promises and stalling tactics” by the company. STA claims it is owed about $300,000.

“We’re used to waiting to get paid, that’s normal,” Mr Cellier said, “but not getting paid at all makes you very frustrated. The government is paying to get this project done and that money is going somewhere – ultimately, we’ve missed out.” 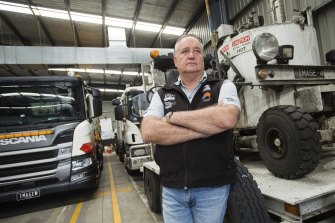 Linemarker Craig Riley is one of the business owners who is owed money after a builder on the Western Roads project went bust.Credit:Paul Jeffers

Image Linemarking owner Craig Riley said the government had been complicit in allowing companies to sign up to large contracts when they were not financially capable of delivering the works.

“The state government is fully accountable. This is one of their marquee projects, at the end of the day they’re the principal, we’re all working for the state to deliver this project. They have to ensure all the checks and balances are done,” Mr Riley said.

“We struggled through COVID, we ensured we kept people employed, we paid our suppliers and we’re asking the state government, how did it get to this?

WBHO’s financial reports from June this year reveal the state government paid the company a "substantial" amount to bail out the project and gave the project a time extension.

A government spokesman refused last week to reveal the amount of taxpayer funds used to keep the project afloat.

“We expect our construction partners to pay their subcontractors appropriately and where issues are identified we make every effort to ensure they’re resolved as quickly as possible,” a Major Roads Project Victoria spokeswoman said.

Despite the problems involving WBHO, the government has shortlisted it as a favoured builder for its separate upcoming $2.2 billion Suburban Roads Upgrade.

In 2019, WBHO executive chairman Mr Nel admitted of the Western Roads project: "We didn’t realise that we would have to do a lot more work than we priced for."

In its financial reports, the company complains of "perpetual delays" and rising costs tied to changes in design scope and problems with utility providers, as well as a misinterpretation of technical requirements and subcontractor failures. WBHO is pursuing claims against its design consultant and utility providers.

Civilink is owed $3.9 million by WBHO, according to a liquidators’ report, while WBHO has made a counter-claim of $21 million against Civilink.

A WBHO spokesperson said it was trying to recover costs from Civilink’s liquidator for “repairing defective work and the costs to complete the remainder of the Civilink abandoned work”. The losses were “significant", the statement said.

The Western Roads Upgrade has been the first package of suburban arterial roadworks in the country built under an availability-style private-public partnership, which gives the Netflow consortium – the project’s joint project sponsors, Cintra and Plenary – full rein to design, build, finance and maintain the project for 23 years.

In return for paying upfront costs and carrying major risks, Netflow will be paid $2.1 billion (nominal) over two decades to maintain 260 kilometres of road, while also retaining the right to explore other commercial opportunities on the roads it manages.

The project’s business case found the private sector was better placed than the government to build the project because it would be faster, 2.3 per cent cheaper, and $4.40 would be returned for every $1 invested.

But, the state government has since scrapped its plan to use the PPP model to build the $2.2 billion Suburban Roads Upgrade, terminating a live bidding process and undoing two years of bidders’ work.

The government confirmed it had reimbursed companies for work done on their failed bids, with one insider suggesting three consortiums may have been paid up to $15 million each. Contracts are yet to be inked even though they were intended for signing in late 2019.

“We are constantly working to find better ways to deliver road projects, which is why we’ve launched a new approach,” a government spokeswoman said. “The government’s changes to procurement for roads have been strongly endorsed by the construction industry as a sensible approach to current market conditions.”

The decision to use an availability PPP to build the Peninsula Link in 2010 cost taxpayers more than if the state built the motorway itself, according to documents revealed last year. Taxpayers are still paying billions of dollars to the private consortium that built the road 10 years ago for a cost of $651 million.

“What has happened over 30 years of this outsourcing model is that we outsource absolutely everything and we do it in a way that is unthinking and uncritical,” Dr Legacy said.

“Once you remove the government from the business of doing infrastructure planning and maintenance, you turn it into something that serves the private sector’s profit margins rather than serving in the public interest.”

Our Morning Edition newsletter is a curated guide to the most important and interesting stories, analysis and insights. Sign up here.