Snow place like home! Can’t wait for the flakes to fall? Just plug in these gizmos for a winter wonderland in your back yard – and even a family-sized snow globe

Snowflakes drift past my shoulders before landing on my boots. My children pelt snowballs at each other from behind Christmas trees as gifts twinkle enticingly by our feet. It looks as if we’ve been transported to Lapland. In fact, we’re in our garden.

Of course, the props — from the snowman I’ve hired to the Santa who has joined us — help create our Yuletide extravaganza. But the highlight of this festive scene is undoubtedly the snow swirling above our heads and turning the air wonderfully white.

We aren’t one of the lucky few towns to receive snow this week, however. In fact, the ‘snow’ isn’t really snow at all.

It is a replica substance that comes from a machine, creating a magical moment similar to one that captivated the Duchess of Cambridge last week, when she was pictured walking through a flurry of artificial snow while hosting a party at Kensington Palace. And it is easier and more affordable to reproduce at home than you might think.

Snow machines work by pumping a ‘snow fluid’ — a water-based substance similar to washing-up liquid — into a mesh fabric nozzle, from where it is propelled into the air by a motor, creating scores of tiny bubbles with an uncanny resemblance to snowflakes. Granted, the fake snow evaporates easily and doesn’t hold its shape. Sledging on it is tricky and building a snowman nigh on impossible. 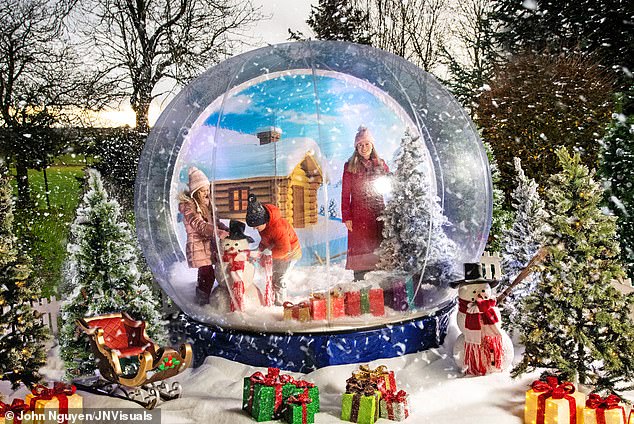 But while the real deal never comes when you wish it would, a snow machine lets you conjure up an instant winter blizzard at the flick of a switch, and — unlike the real thing — can be done indoors.

Providing the perfect festive twist to parties, as well as ensuring the white Christmas your children long for is actually delivered this year, snow machine prices differ dramatically.

Climb into a cool bubble

Christmas Giant Snow Globe, from £895 to hire for a day, sunshineevents.co.uk

It might be dark and distinctly chilly outside, but the children and I are cocooned from the December weather in a giant 10 ft high plastic blow-up bubble.

I have hired a snow globe for the afternoon, replete with snowman, Christmas tree, presents and plastic snow being blown gently into the air by fans in the globe’s base. In between them the three of us are like life-sized dolls in a giant replica of the hand-held toy that as a child I’d shake in wonder to set off a snow storm.

‘We all remember snow globes as children. They trigger romantic memories, which is why they appeal,’ says Richard Maughan of Sunshine Events, the Lancashire-based company that has loaned me their globe on a rare day it’s not booked out this month.

Business is, apparently, booming, with reasons for booking a snow globe — which costs from £895 to £1,500 to hire for a day — varying from Christmas proposals, to the family who wanted to treat their terminally-ill daughter to a white Christmas when she was too poorly to go to Lapland. 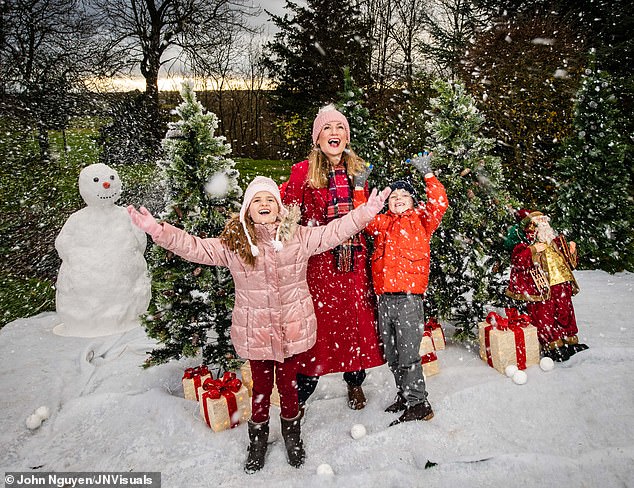 Providing the perfect festive twist to parties, as well as ensuring the white Christmas your children long for is actually delivered this year, snow machine prices differ dramatically (pictured: Antonia, Felix and Rosie playing in the garden)

In an age of ever-competitive Instagram posts, popularity is further fuelled, undoubtedly, by the prospect of being able to put the experience on social media. ‘They are primarily a photo opportunity,’ Maughan admits.

It seems like a lot of effort for a picture, I think, as two men spend two hours constructing the globe in my garden. The PVC plastic sphere is placed on a metal base before being inflated with a fan and strengthened with a stainless steel pole. But while it may take a while to prepare, the end result is so luridly festive my children gasp in delight.

We climb the three steps at the back to enter through two doors of tightly zipped fabric that create an airlock which keeps the globe inflated and causes our ears to pop. Once inside, voices in the real world are muffled, adding to the mystical experience.

I feel slightly claustrophobic — the globe holds up to eight adults, but it’s cosy enough with just the three of us — and perplexed as to what I’m supposed to do. Eating and drinking aren’t allowed and there’s nowhere to sit down.

But then Rosie and Felix start throwing snow around excitedly and cooing over the snowman, and, against my better judgment, I succumb to a bonkers and decidedly modern festive phenomenon.

This compact white model, just 40cm long and with a one-litre tank to pour snow fluid into, comes with a bracket to mount the machine high on a wall for maximum snow drama.

Unlike most machines, for which you have to buy snow fluid separately at around £15 per five litres, it arrives with a 250ml bottle of concentrate that makes five litres of mixture when diluted.

It has a 600-watt motor and a white, conical-shaped fabric mesh from where the ‘snow’ emerges within seconds.

It’s noisy: when I turn it on via the remote control attached to the machine by a wire and fire it out of my window, it sounds as if an industrial strength vacuum cleaner is perforating my ear drums. Yet Felix is too wowed by the flurry of snowflakes — considerably bigger than those created by other machines — to notice. As he plays in the winter scene, his screams of ‘Mummy this is epic’ are just about audible over the din.

Find a shovel — and your mop

With a 600-watt motor and modest 1.2-litre tank to pour the snow fluid into, this smaller machine is controlled through a remote at the end of a 2.5m-long wire. So without an extension lead there’s not a great deal of flexibility as to where you put it, and despite being less powerful than most machines this model was just as noisy.

The flakes form a narrow stream, but travel an impressive six metres nonetheless, covering five metres of floor per minute. As with other machines, the ‘snow’ that lands on my lawn isn’t a problem — although it lingers for an hour, manufacturers claim the solution has had any toxins removed to ensure it is biodegradable, environmentally safe and not likely to harm grass.

But when I try it inside, after an hour the snow still hasn’t evaporated and I’m forced to shovel it off the kitchen floor. The wood is left slightly sticky — although reassuringly, when I test it on my carpet, there’s no residue.

Snow is falling all around us

Saddle up the sleigh! With a 1,800-watt motor and five-litre tank capacity, this sleek silver model has a wired remote control with two dials — one to adjust the duration of each burst of snow and a second to alter the length of time between them, so you can keep Christmas guests guessing as to when the next snow storm is due.

Strong enough to create ten metres of snow per minute, when I blast it out of my window it leaves enough snow for the children to throw into the air in glee. 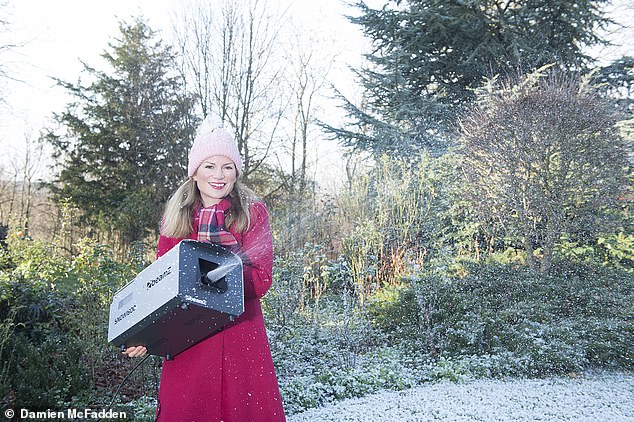 Strong enough to create ten metres of snow per minute, when I blast it out of my window it leaves enough snow for the children to throw into the air in glee

More of a drizzle than a blizzard

Smaller than a shoe box, this ‘cute’ machine, as Rosie put it, will certainly reduce Christmas clutter and would be a good gift for gadget-loving children.

The cheapest model I test, it looks sleek and is a bargain at £35. It also helpfully arrives with snow fluid already inside the 0.2 litre in-built tank. But with a 400-watt motor — the lowest of all I try — it just doesn’t seem very powerful.

The snowflakes emerge in a sporadic trickle rather than a full-on snow storm, travelling no more than a couple of metres before falling to the ground. I can’t help but feel a little underwhelmed, although if you’re looking to experiment indoors without covering your upholstery in foam this could be the snow machine for you. 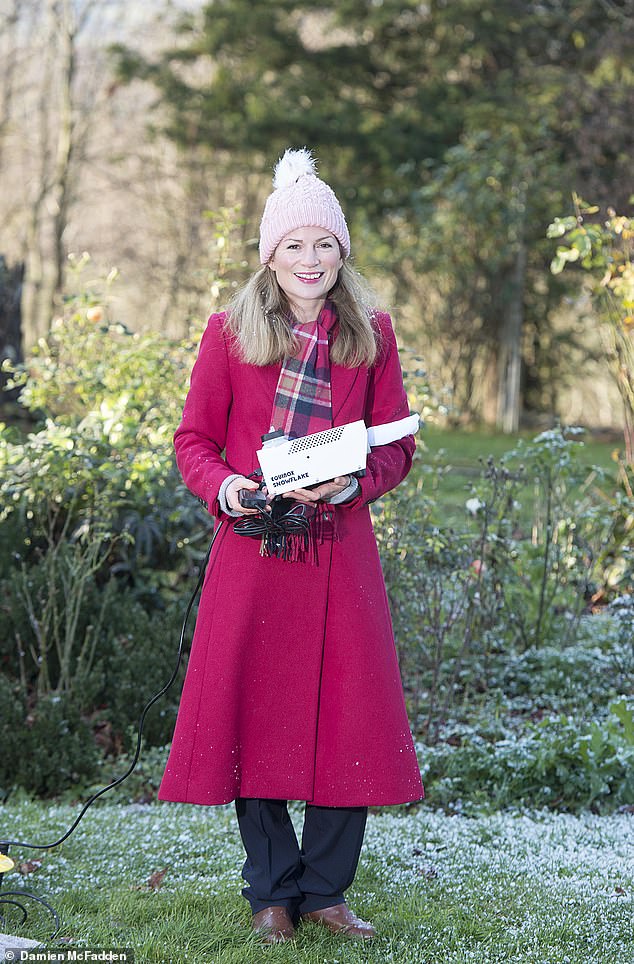 The snowflakes emerge in a sporadic trickle rather than a full-on snow storm, travelling no more than a couple of metres before falling to the ground

A big blast of snowflake fun

Although intended, like most models, for indoor use only, this powerful, 1,200-watt machine (the noisiest of the bunch) seems more suited to my garden than the kitchen, where the floor ends up covered in three inches of foam, which delights the children but also requires me to shovel it away.

It has a five-litre container for the snow fluid and comes with a generous 20 litres of solution — enough for three hours of continuous snow. There is a wired remote control and a handy wireless fob to turn the machine on from up to eight metres away, ensuring you can control the weather while whipping up a few Christmas cocktails. There are five speeds for the snow — on full blast, the snowflakes travel six metres and with such force our faces end up white.

Although snow fluid is described as ‘dermatologically safe’ it’s not advised you get it in your eyes or mouth — no mean feat if it’s positioned to fall at head-height. Luckily, we escape unscathed. 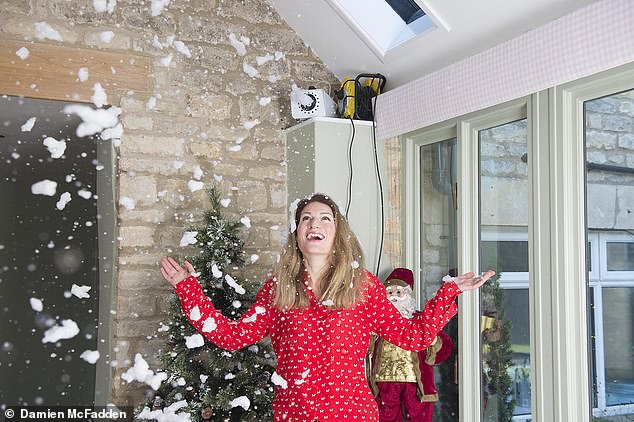 A silver, cylindrical machine that looks somewhat like a rocket launcher, the SB100 sells for an eye-watering £1,232 (plus VAT). But it’s currently sold out, so I rent it for £105 per week instead.

For use indoors or outdoors, it has a 20-litre capacity tank for the snow fluid and a wired remote controller that adjusts both the snowflakes’ size and the speed at which they fall.

It weighs a whopping 18kg when full and makes my arms ache under the load (although I do feel like an action adventure heroine as I brandish it about).

The resultant blizzard leaves the garden covered and the children euphoric. This is the most powerful by far of the machines I test, but at this price you could almost afford to go skiing in the real thing. 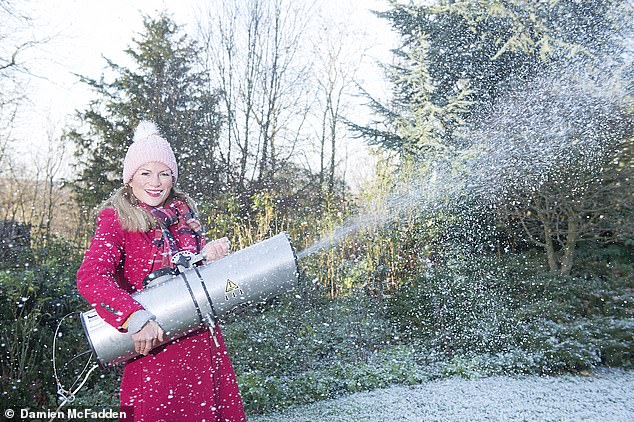 Antonia with the SB100, which looks somewhat like a rocket launcher and sells for an eye-watering £1,232 (plus VAT)