Widowed presenter Simon Thomas has revealed he ‘longs to get back to broadcasting’ but is struggling to find opportunities for work, more than two years after his wife’s death.

The former Sky Sports presenter, 46, from Norfolk, lost his wife Gemma in November 2017 after a battle with cancer, and left the channel in 2018 to spend more time with their son Ethan, 8.

But in a revealing Instagram post this morning, he opened up about wanting to return to work and said he felt his career had been a ‘secondary loss’ of Gemma’s death.

He wrote: ‘I long to get back to broadcasting and doing something I loved so much for 20 years; but right now it feels that every door I push is closing.’ 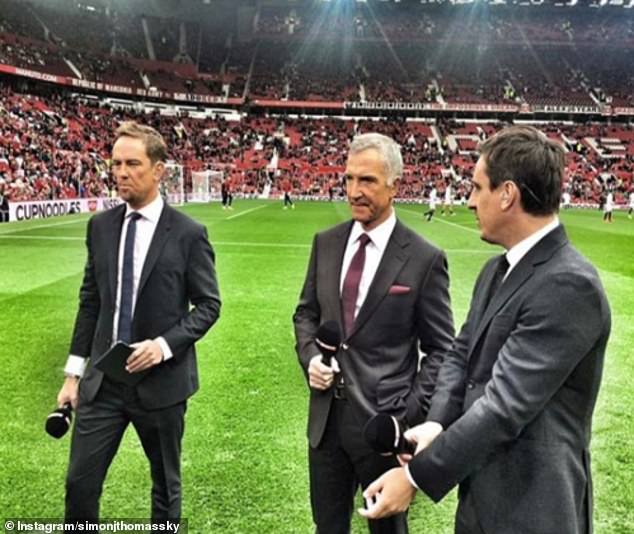 Former Sky Sports presenter Simon Thomas, 46, from Norfolk, has revealed how he ‘longs’ to return to broadcasting following the death of his wife two years ago

Taking to his profile earlier today, he shared a picture of a coffee cup, writing: ‘It’s by no means everything; but so much of our identity is in what we do, we don’t just work to earn a living, we also work because it gives us a sense of purpose, it makes us part of who we are.

‘I have so much to be thankful for in my life right now and so much to look forward to; but this is the one area I’m struggling with so much.’

He went on: ‘I long to get back to broadcasting and doing something I loved so much for 20 years; but right now it feels that every door I push is closing.

‘It’s also something when it comes to loss that doesn’t get talked about or acknowledged very often – the secondary losses – the career, finances, identity.’ 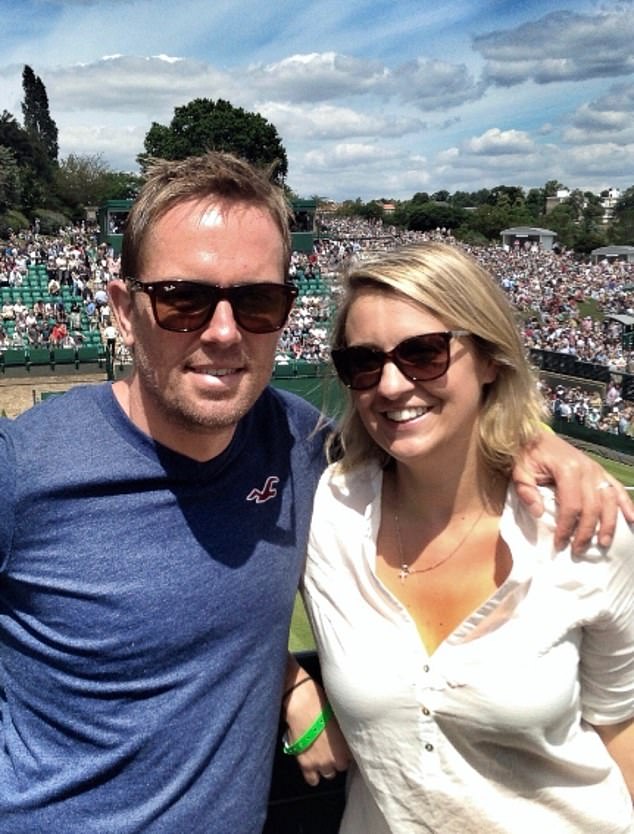 He went on to say he was trying to remain positive, tagging his girlfriend Derrina Jebb, 27, to thank her for her support.

He wrote: ‘I’m going to try and remain positive, trust God and draw on the constant love and encouragement of @Derrina and my boy; but right now I’ve had my fill of sitting in coffee shops.’

Simon joined Sky in 2005 after 13 years at the BBC, before working as a presenter on Sky Sports News and Sky’s coverage of EFL and League Cup football.

His late wife Gemma tragically died in November 2017, a year after she was sent home for bed rest by her GP after visiting three times with flu-like symptoms. 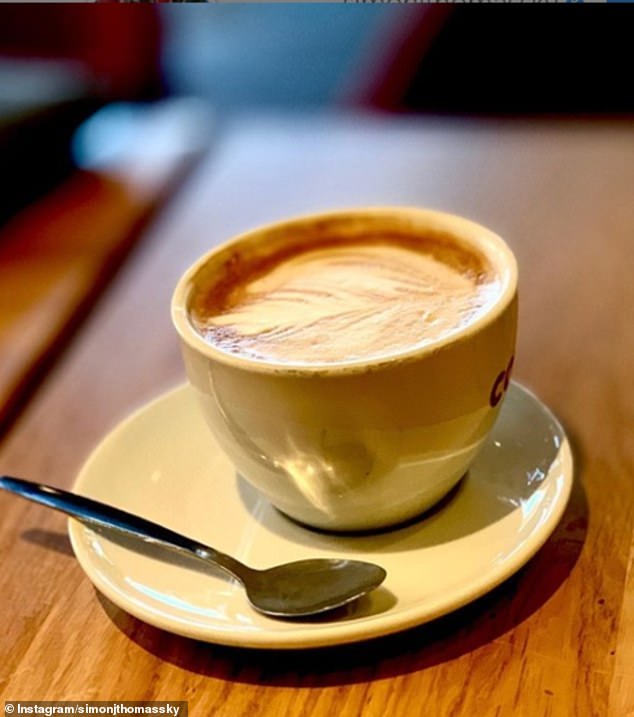 The father-of-one shared a snap of a cup on Instagram, revealing that he was struggling to get back to work, and fed up of sitting in coffee shops 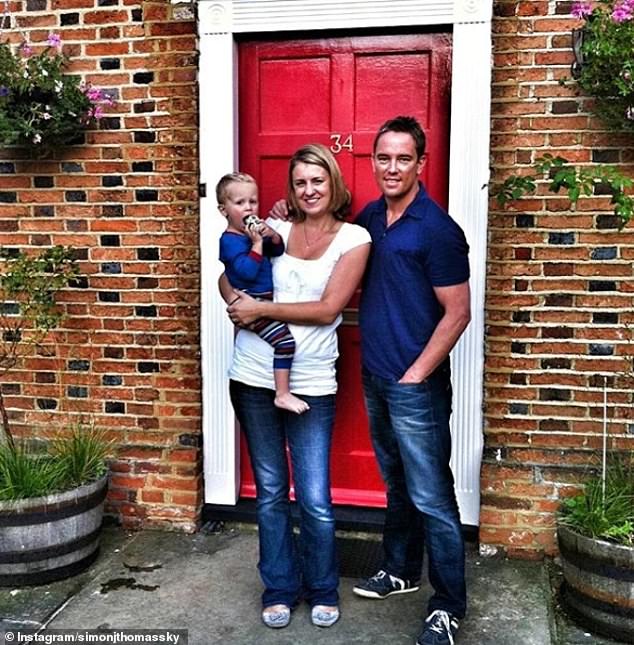 She died just four days after being diagnosed with acute myeloid leukaemia, aged 40.

The following April Simon announced he would be leaving his role at Sky, citing his main reason as wanting to dedicate time and energy to Ethan.

Last year, he released his book ‘Love, Interrupted: Navigating Grief One Day at a Time’ documenting his struggle to cope with the death of his wife.

Simon has been open about his mourning, sharing his grief with his 99,000 Instagram following, who have in turn shown their support for the widower. 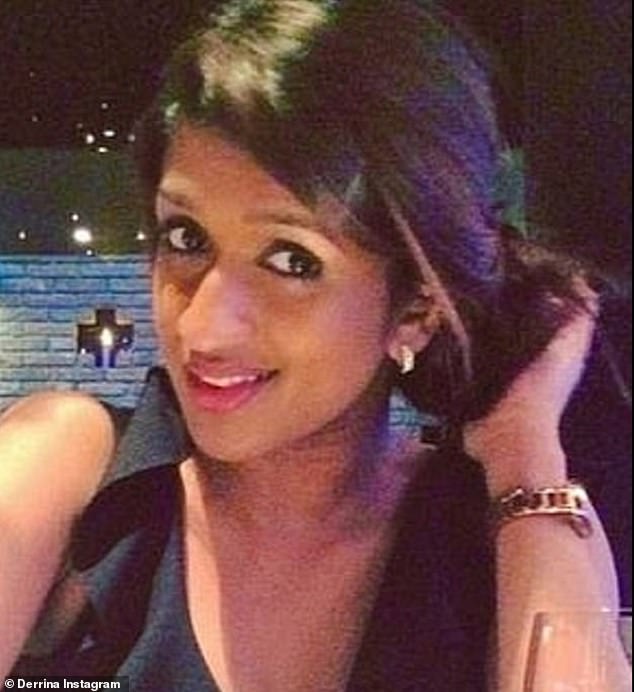 In his revealing Instagram post, he paid tribute to his girlfriend Derrina Jebb, 27, a minister’s daughter he is said to have met in church

In November, he revealed his son Ethan has made him a box to help him cope with his grief, as he addressed the stresses of juggling work with fatherhood.

Explaining that the little boy had disappeared into the lounge for an hour, he told how Ethan reemerged with a box containing inspirational notes and a ‘worry’ notepad.

Among the notes was a one from Ethan describing his father as ‘super, irreplaceable, magical, outstanding’ and ‘not a bad cook’.

What is acute myeloid leukaemia?

Acute myeloid leukaemia is an aggressive and rare form of blood cancer.

The symptoms of AML usually develop over a few weeks and become more severe.

According to NHS Choices, the symptoms include:

In advanced cases, patients are incredibly vulnerable to life-threatening infections and internal bleeding.

If a GP suspects leukaemia, they will arrange a blood test to determine blood cell production.

In AML, stem cells within the patient’s bone marrow produce too many immature white blood cells, which are not capable of fighting infection.

This also can lead to a decrease in production of the oxygen-carrying red blood cells and platelets that help the blood to clot.

Each year around 2,600 people in the UK are diagnosed with blood cancer.

After diagnosis, patients need urgent chemotherapy due to the aggressive nature of the cancer.

In some cases, radiotherapy may be needed along with a bone marrow or stem cell transplant.

Should you open the windows in hot weather? Top tips on staying cool in 38C heat today
We and our partners use cookies on this site to improve our service, perform analytics, personalize advertising, measure advertising performance, and remember website preferences.Ok