‘It is racist and transphobic’: Serena Williams’ GQ Woman of the Year cover sparks outrage as the magazine is slammed for using quotation marks around the word WOMAN

Serena Williams being named Woman of the Year by GQ should have led to nothing but celebration – but instead the tennis player has found herself at the center of a furious controversy after the publication released her cover with the word “woman” written in quotation marks.

The 37-year-old’s cover shot was released on Monday alongside the three images for the Men of the Year – Michael B. Jordan, Henry Golding, and Jonah Hill – none of which featured quotation marks around the word men, a fact that has prompted serious upset online.

‘Okay but why is woman in quotation marks?’ one woman tweeted at GQ, while another person shared an image of last year’s Woman of the Year cover – which featured Gal Gadot, and no quotation marks around the gender – alongside Serena’s and simply wrote: ‘Hmm.’ 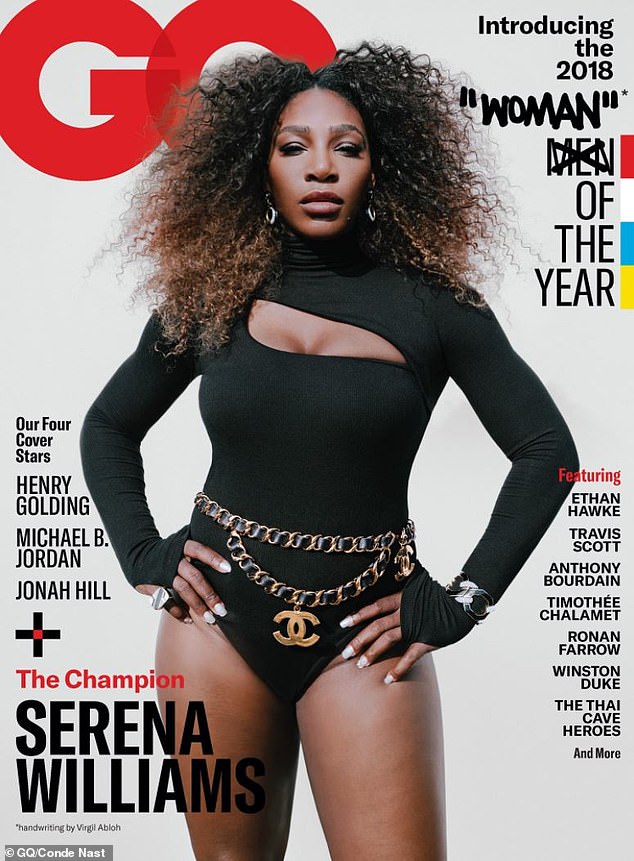 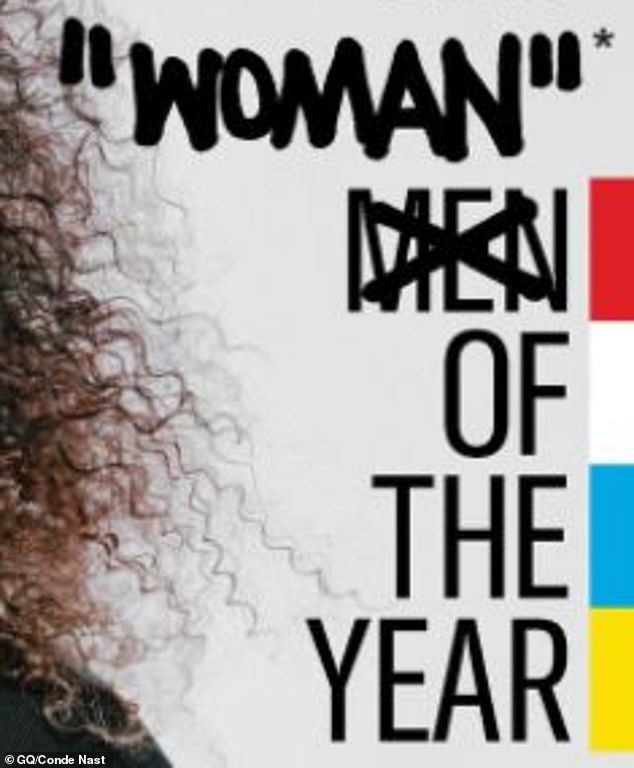 Upset: The 37-year-old was the only female recipient of the award this year, however there were three Men of the Year covers, none of which featured quotation marks

Why? Twitter users were quick to call out GQ for the quotation marks 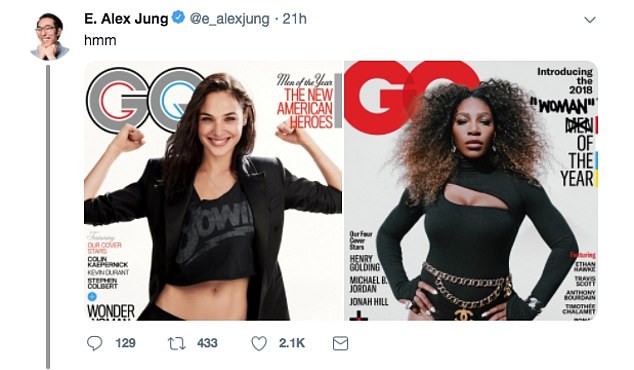 Confusion: One social media user shared an image of Gal Gadot’s Woman of the Year 2017 cover, which featured no quotation marks, alongside Serena’s from this year

Another person blasted the move as ‘inappropriate, dangerous, racist, and transphobic’, while one person demanded that the publication issue an explanation for the controversial design decision.

Serena herself has not addressed the controversy, but nor has she shared the cover image on any of her social media accounts – which may well speak volumes in and of itself.

Some social media users rushed to defend GQ however, pointing out that the word woman was handwritten for Serena’s cover by her close friend, Off-White designer Virgil Abloh, whose signature style is to use double quotation marks around basic words, something that he does on all of his clothing.

The designer was actually responsible for the Nike tutu dresses that Serena wore at this year’s US Open – all of which featured the word “LOGO” in quotation marks above the signature Nike swoosh.

‘[Woman] was handwritten by Virgil Abloh of Off-White, who has styled everything in quotation marks as of late (see Serena’s US Open apparel that he designed),’ one Twitter user pointed out in the wake of the controversy surrounding the cover.

However, Virgil’s participation in the cover’s creation did little to quell the upset of social media users – with some even choosing to attack the designer personally for allowing the cover to be positioned in the way that it was.

‘I get the Virgil Abloh reference but that quotation around woman is weird af and totally uncalled for,’ one Twitter user wrote, tagging the designer in the process.

Someone else then chimed in: ‘In the context of Serena Williams, a person who has been mocked for her appearance and deliberately misgendered for years… this ain’t it, Virgil.’

Explanation: Some Twitter users pointed out that Serena’s friend, Off-White designer Virgil Abloh, had written the word and had simply used his signature double quotation style

Not buying it: Virgil’s participation in the cover did little to calm the outrage, with some users even choosing to call out the designer personally 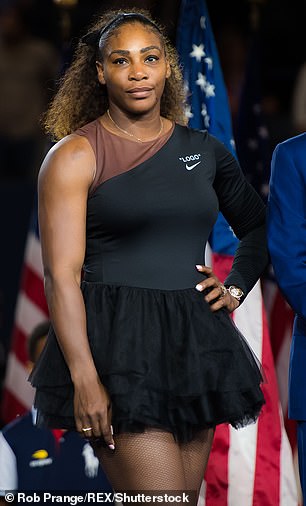 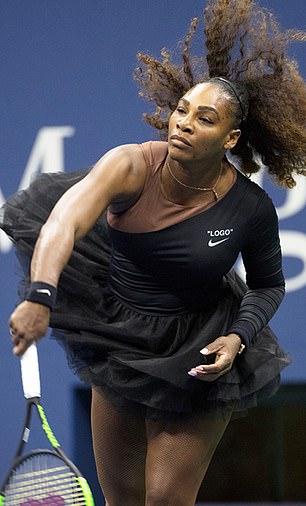 Close friend: Virgil designed the tutu dresses that Serena wore at the US Open this year, all of which featured the word “LOGO” in double quotations above the Nike swoosh

In 2015, Serena was targeted by cruel online trolls, who bashed her appearance, and told her she was ‘built like a man’ and looked ‘manly’, while others poked fun at her ‘caterpillar’ eyebrows.

Shockingly, the taunts from cyber bullies came just hours after the 23-time Grand Slam champion claimed victory in the Wimbledon final, with a fantastic victory against Garbine Muguruza.

But while Serena chose not to address the criticism directly, many others came to her defense, including Harry Potter author JK Rowling, who demolished a troll who dared to attribute Serena’s tennis success to being ‘built like a man’.

JK shot back at the male Twitter user with a photo of curvaceous Serena in a form-fitting red dress, writing: ‘Yeah, my husband looks just like this in a dress. You’re an idiot.’

The latest controversy surrounding her GQ cover marks the end of what has been a jam-packed year for Serena, both on and off the courts.

Having welcomed a baby last fall and faced life-threatening complications during childbirth, she made her return to the Grand Slam circuit this year, taking just months off before she began training again.

‘No matter how you cut it, Serena Williams had a remarkable year,’ the magazine said of its choice to include the ‘G.O.A.T.’ Serena in the line-up.

It has certainly been a busy, and at times, difficult year for the Grand Slam champion, both on and off the court.

At the Open this year, Serena earned a lot of positive attention for the Nike x Off White tutu dresses she modeled while playing — but her appearance also stirred up some controversy when she got involved in a ferocious arguement with a referee during the final, saying he stole the tournament from her.

The win went to her opponent, Naomi Osaka, making her Japan’s first ever grand slam winner.

But it was Serena’s cross exchange with the umpire that dominated headlines around the world, causing some to question whether it had lost her the match, or whether she had truly been bested by a player who, in that moment, was the more skillful of the two. 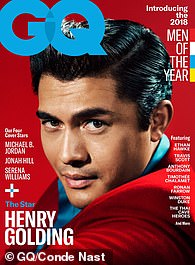 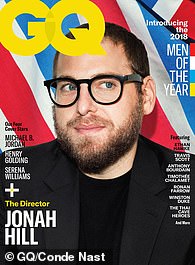 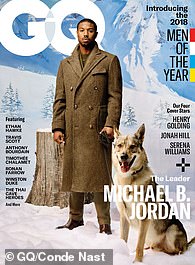 Not fair: None of this year’s Men of the Year covers – featuring Henry Golding, Jonah Hill, and Michael B. Jordan – had quotation marks around the word men 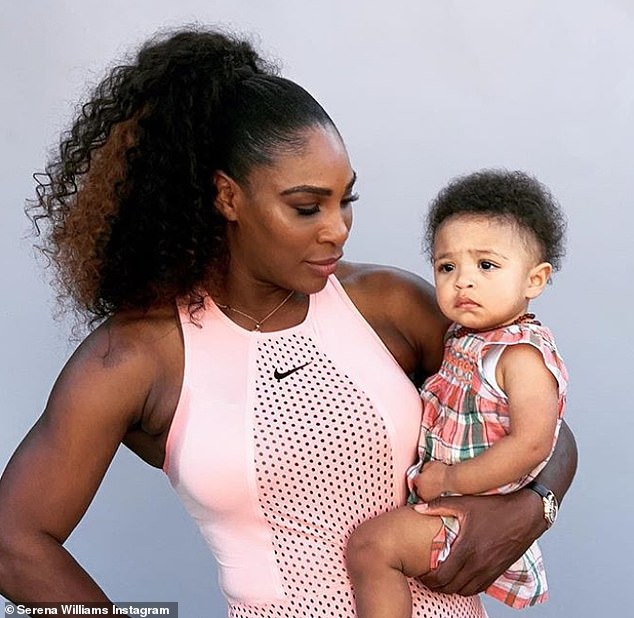 Mom power: The 37-year-old was picked for doing ‘amazing things’ this year — including coming back to tennis so quickly after having a baby, Olympia

Following the match, Serena was fined $17,000 for her conduct on the court, which was taken out of her $1.85 million prize money for finishing in second place.

Away from her rigorous training schedule, Serena’s personal life has also been through something of an evolution this past year.

As well as welcoming her first child, and adapting to life as a working mother, this week will also mark Serena’s first wedding anniversary with her husband, millionaire Reddit founder Alexis Ohanian.

The couple tied the knot in New Orleans on November 16 in a stunning Beauty and the Beast-themed ceremony that saw the beautiful bride change dresses multiple times, and featured a host of A-list guests, including Kim Kardashian, Beyoncee Eva Longoria, and Anna Wintour. 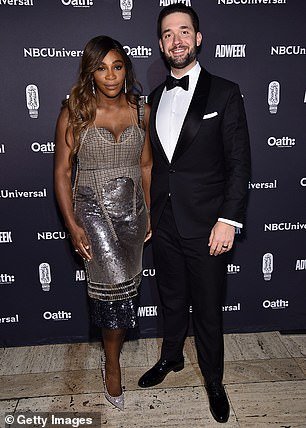 Guests, who were told to dress in keeping with the Beauty and the Beast theme, were greeted with the Disney movie’s famous song Be Our Guest.

Serena and Alexis’s ceremony also celebrated many of the tennis pro’s greatest achievements on the court.

The tables at the reception were all named after her 23 grand slam titles, and the party favors were recreations of the trophies that she had won for each.

Although it is not known whether Serena will open up about her wedding, or her marriage, in the GQ interview, the publication promises that she will divulge details about her plans for the future, which will no doubt include her family life away from the courts.

For now, fans can go wild over her cover photos, which shows her posing with her hands on her hips, her hair natural, and a bunch of bold jewelry on her wrists, fingers, and ears.

While GQ’s special issue is officially called the Man of the Year issue, the magazine has been including women in the mix since 2013.