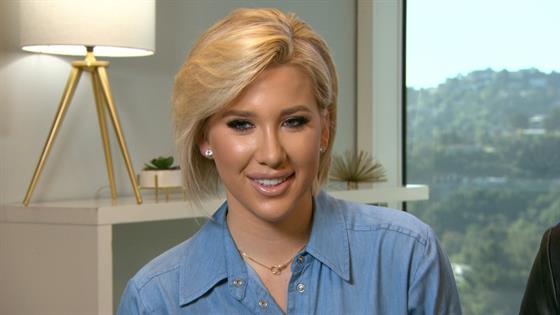 Think there’s trouble in paradise between Savannah Chrisley and Nic Kerdiles? Well, he is here to set the record straight.

The Chrisley Knows Best star and her fiancé, who got engaged last Christmas, recently sparked breakup rumors after she posted some pics that don’t show her wearing her engagement ring, and after she debuted a shorter haircut. Nic was asked about the issue and about his and Savannah’s relationship status on her father Todd Chrisley‘s podcast Chrisley Confessions in an episode released on Wednesday.

First, they discussed her haircut.

“I thought she looked great. I was shocked,” Todd said, before joking, “If you’re gonna cut your hair that short, I don’t know that flannel would be the thing that you should be rocking with it, but you know, listen, if it’s your thing, it’s your thing.”

“That woman, she can rock any haircut, it’s incredible,” Nic said. “She does look a little more like you after that haircut, I have to say. But she’s beautiful inside and out and she’s one strong woman, she’s brave, she’s courageous. She did this for a lot of reasons and I’m really proud of her.”

Todd then brought up the breakup rumors.

“It’s funny how people read into the smallest things like that,” Nic said. “But I mean, yeah I get that, there’s no engagement ring in some of her pictures. I mean, we’re together. Savannah and I are fine. We are working on ourselves every single day and our relationship. And listen, it’s not a perfect road, like we go through ups and downs. There’s a lot of stuff that I need to work on, there’s a lot of things that she needs to work on, and communication being one of them. So, we are very happy. We are in a good place.”

Savannah has not commented.

Nic opened up about his and Savannah’s “honeymoon phase,” when they rarely argued and saw each other less.

“So things were incredible. And when that kinda faded off…I was not the best person,” he said. “I had a lot of stuff that deep down inside hadn’t been working on and I just buried.”

“Until I realized that I needed to work on myself and there were things that I was doing wrong, we didn’t get back to a good place,” he said. “But right now, we are at the best place we’ve ever been at, in my opinion, and Savannah will tell you the same thing, just because we are continuously working on our relationship and have made our relationship our priority, too.”

Nic confirmed that he and Savannah have separate homes but spend every day together.

“We’re in a great place,” he said. “Honestly. And I think that we’re only gonna get stronger, because, like I said, we’ve…started making our relationship a priority and we are working on ourselves and admitting to the things we’ve done wrong, and that’s been the biggest blessing, it really has. So, for anybody who’s doubting whether we’re together or not, we are together, we are very happy, and we are continuously working on our relationship.”