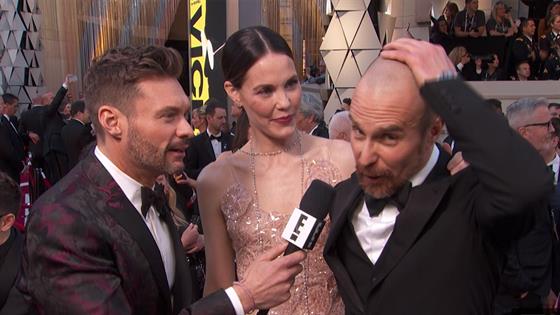 It sounds like Sam Rockwell went a little overboard preparing for his role in Vice.

When he hit the 2019 Oscars red carpet with partner Leslie Bibb, E!’s Ryan Seacrest asked what he used to get ready to play George W. Bush, and it was Bibb who stepped in.

“Ev-ery-thing,” she said. “We live in New York and we live in a loft so there’s no walls, so it was like, morning, noon, and night.”

“I did everything you can think of, man,” Rockwell explained. “I was like obsessed with being George Bush.”

He watched the Josh Brolin movie W, he watched Will Ferrell‘s SNL impression, and of course he practiced in front of the mirror. Just based on the way Bibb said “ev-ery-thing,” we’re going to guess it wasn’t very much fun for her.

Rockwell is currently riding quite a high. He’s in the midst of playing dance legend Bob Fosse for FX’s highly anticipated Fosse Verdon series (for which he shaved his head), and he won Best Supporting Actor last year for Three Billboards Outside Ebbing, Missouri. He’s up for that same award again tonight, against Mahershala Ali, Adam Driver, Sam Elliott, and Richard E. Grant.

“I feel very lucky. I feel very fortunate,” he said of being back just a year after winning the first time. “I mean, it’s a trip. I’m hoping I can maybe be present and enjoy it…it’s such an out of body experience, you know?

No, Sam Rockwell. We don’t know, and we likely never will.