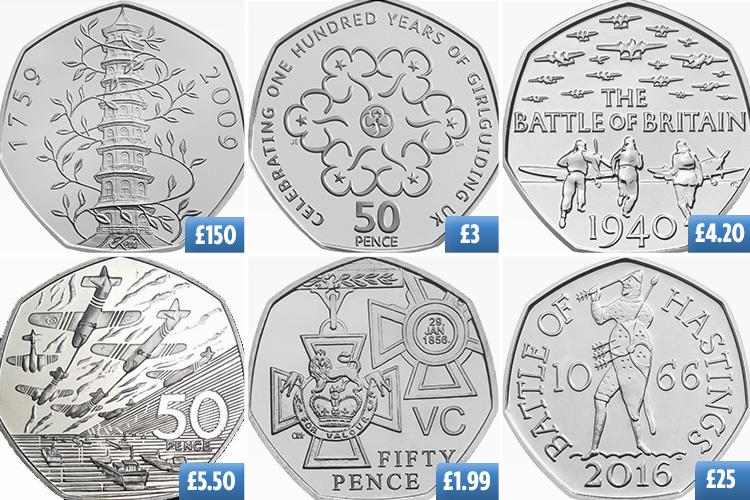 Ten old designs will be minted again, including a sought-after Kew Gardens 50p piece from 2009.

They won't end up in your loose change though, as the coins will only be issued as commemorative cupro-nickel, silver and gold proofs to mark the 50th anniversary of the 50p coin.

Eight of the coins are among the 59 rarest 50p pieces that have entered circulation in the UK, according to coin collecting website Change Checker's scarcity index.

Among them is the Kew Gardens design, which were minted in 2009 to celebrate the 250th anniversary of London's Kew Gardens.

These coins can fetch high prices on eBay, with circulated versions of the Kew Gardens design fetching up to £150.

What to do if you've found a rare coin

Around one in every four old £1 coins were thought to be fake, according to the Royal Mint, so there are probably more fakers in your spare change then you realise.

The Royal Mint is unable to value a coin but it can confirm whether it is real or not. They will usually supply you with a letter to confirm this.

A word of warning: these commemorative reissued coins are very unlikely to be as valuable as the original coins from the year they were first minted.

But if only a small number of the reissued coins are minted, they could become valuable because they will be rare.

The Royal Mint has not yet revealed when exactly the coins will be minted or how many of each coin design will be reissued. The Sun has asked and we will update this story if we hear back.

We've found how valuable each of the ten coins that are due to be reissued next year really are by seeing how much circulated versions of the 50p pieces recently sold on eBay.

Now might be a good time to check the change in your purse before they are reissued – because you might be the owner of one of the rarest 50p coins without even knowing it. 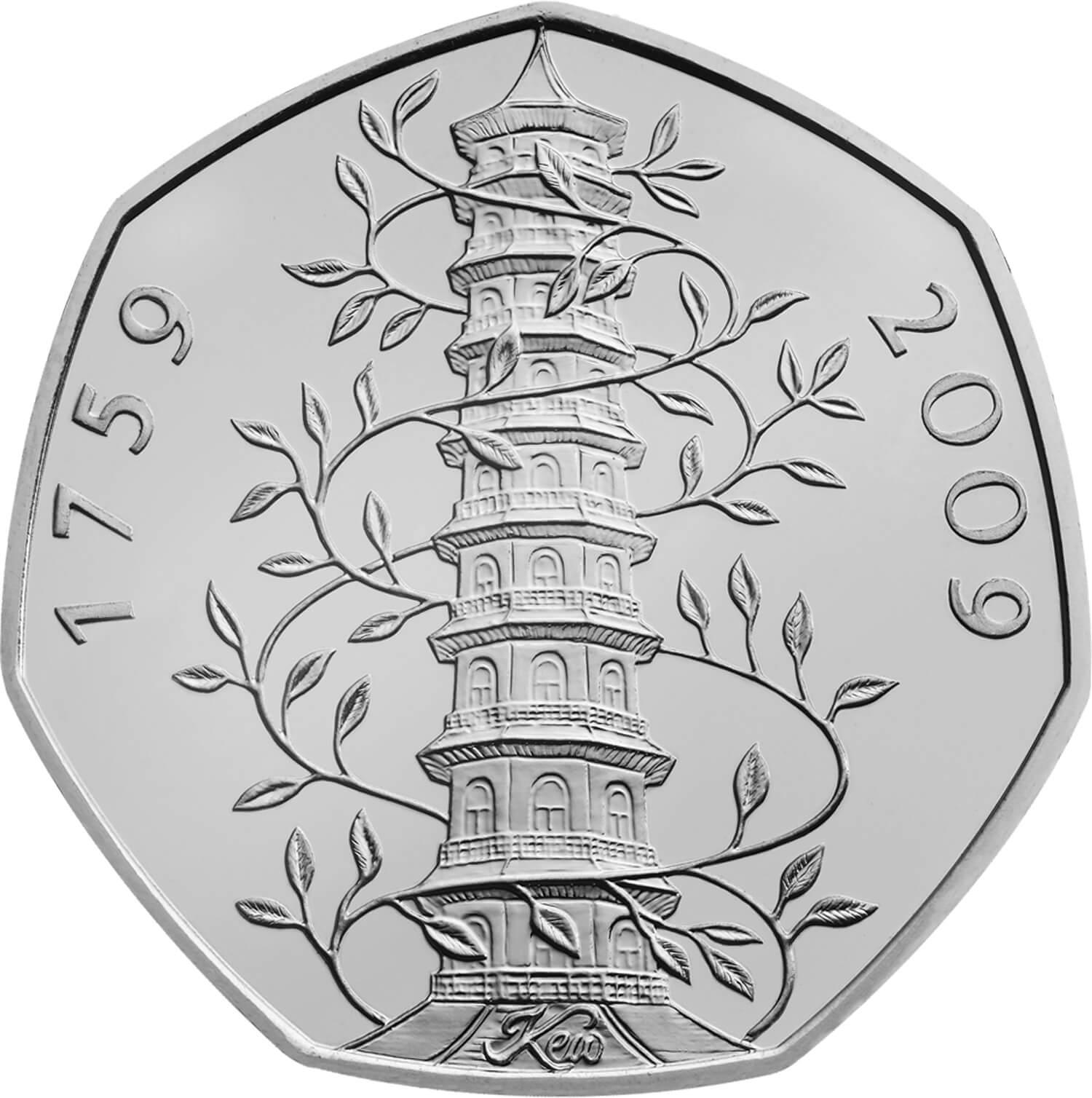 With a mintage (the number of coins issued) of just 210,000, it is the rarest coin and is the most in demand.

The silver versions were released into circulation in 2009 to celebrate the 250th anniversary of London's Kew Gardens, and the coins feature the famous Chinese pagoda from the botanical gardens on the design.
The coins sell for up to £150 on eBay, while proofs sell for up to £382. 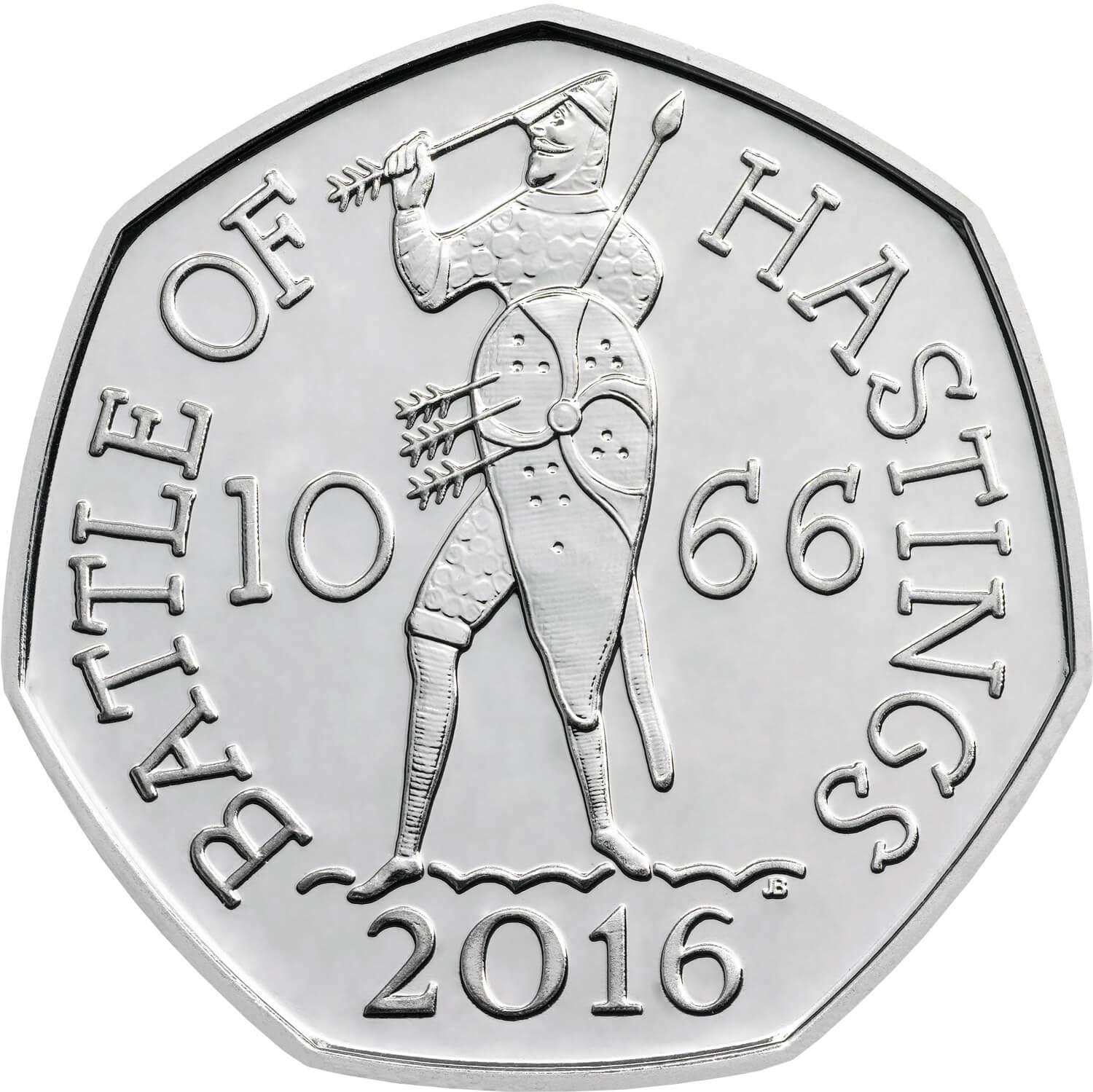 Even though it ranks low on the scarcity index as 6.7million were issued, the 2016 Battle of Hastings 50p coin is one of the most in demand pieces.

Circulated versions can sell for up to £25 on eBay.

It was released to commemorate 950 years since the Battle of Hastings in 1066. 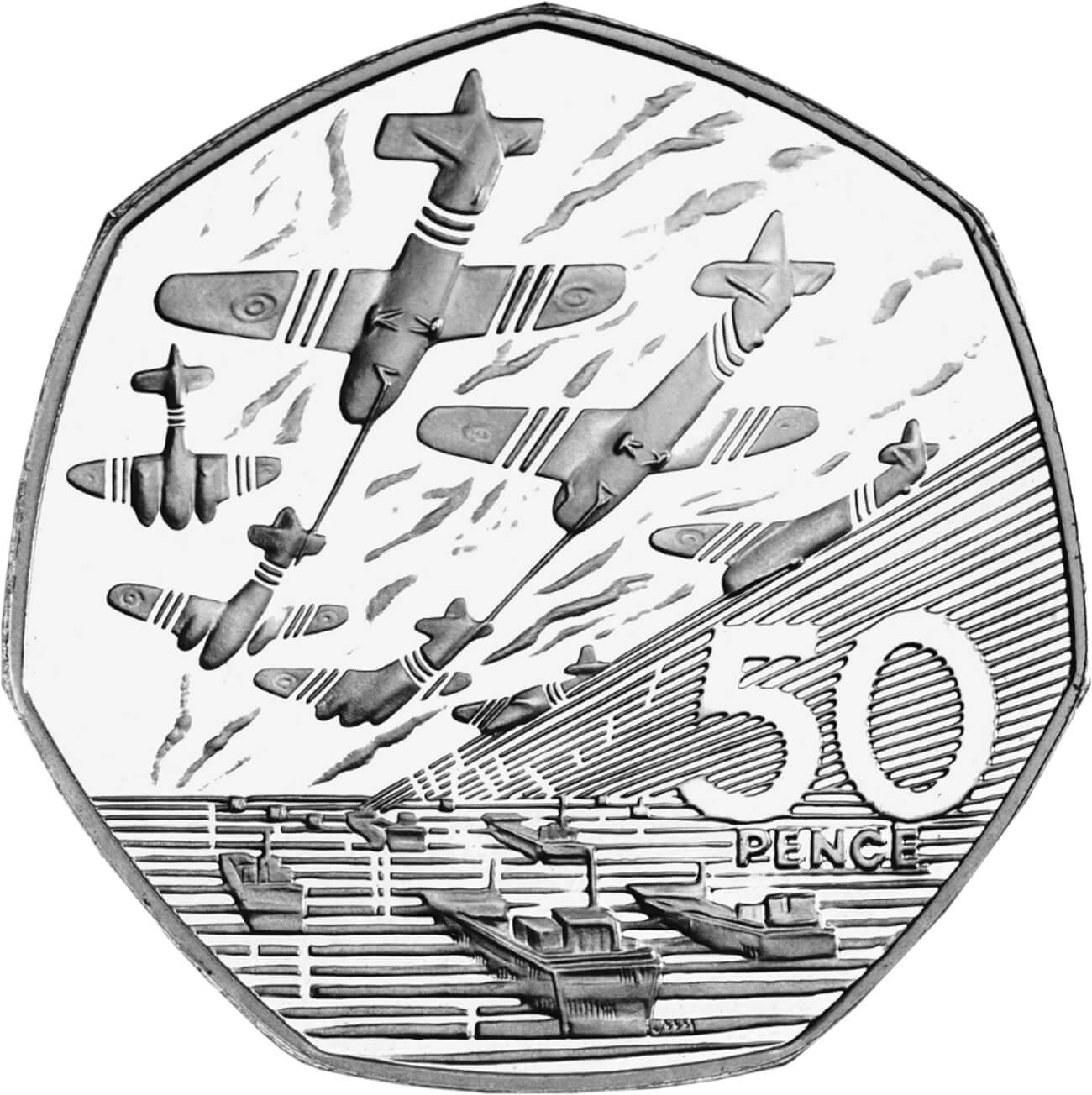 The oldest coin to be reissued next year was minted in 1994, when 6.7million entered circulation.

It was released to mark the 50th anniversary of the D-Day landings during World War Two.

It doesn't appear on Change Checker's scarcity index but it's sought-after by collectors and fetches up to £5.50 on eBay. 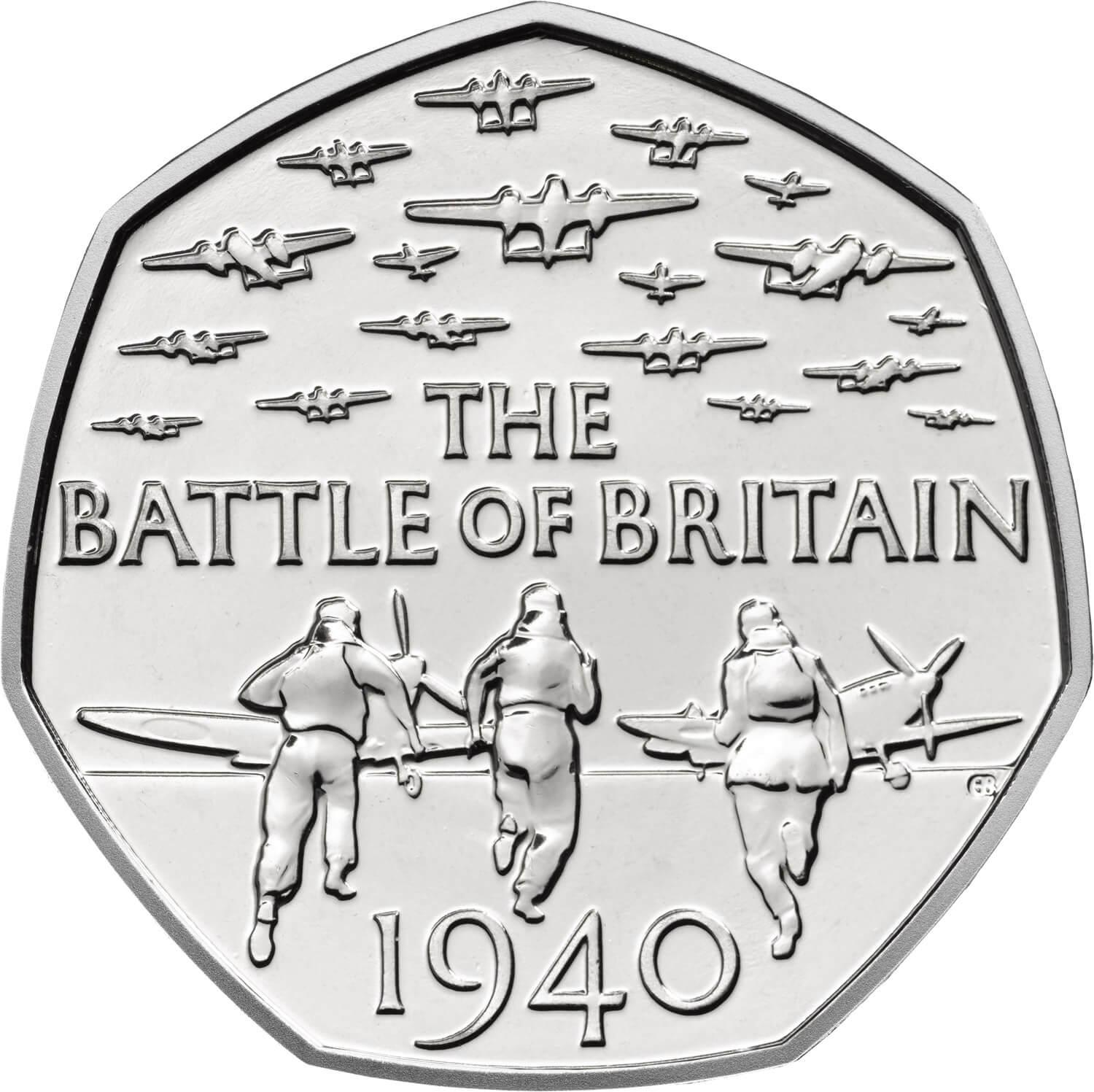 This coin is classed as common on Change Checker's scarcity index as 5.9million were originally issued but it still ranks as one of the 50 most rare.

It was first issued in 2015 to commemorate the 75th anniversary of the Battle of Britain, and next year it will enter circulation again for the first time since.

It doesn't sell for as much as a Kew Gardens coin, but you could still earn up to £4.20 by flogging a circulated version on eBay – more than eight times its face value. 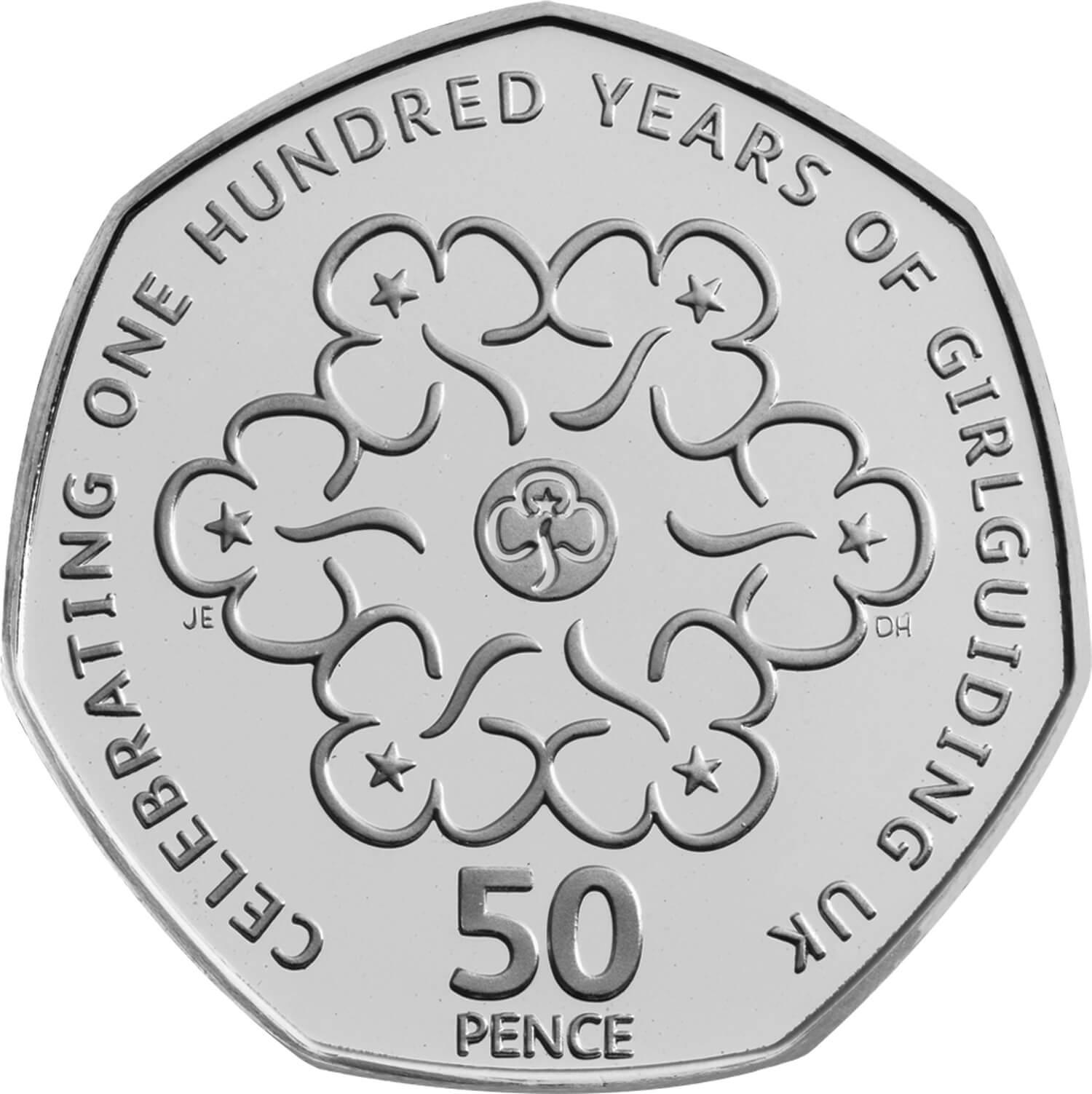 It's classed as "common" on the scarcity index but is still among the top 55 rarest coins in the UK, according to Change Checker's scarcity index.

They sell for up to £3 on eBay – six times its face value. 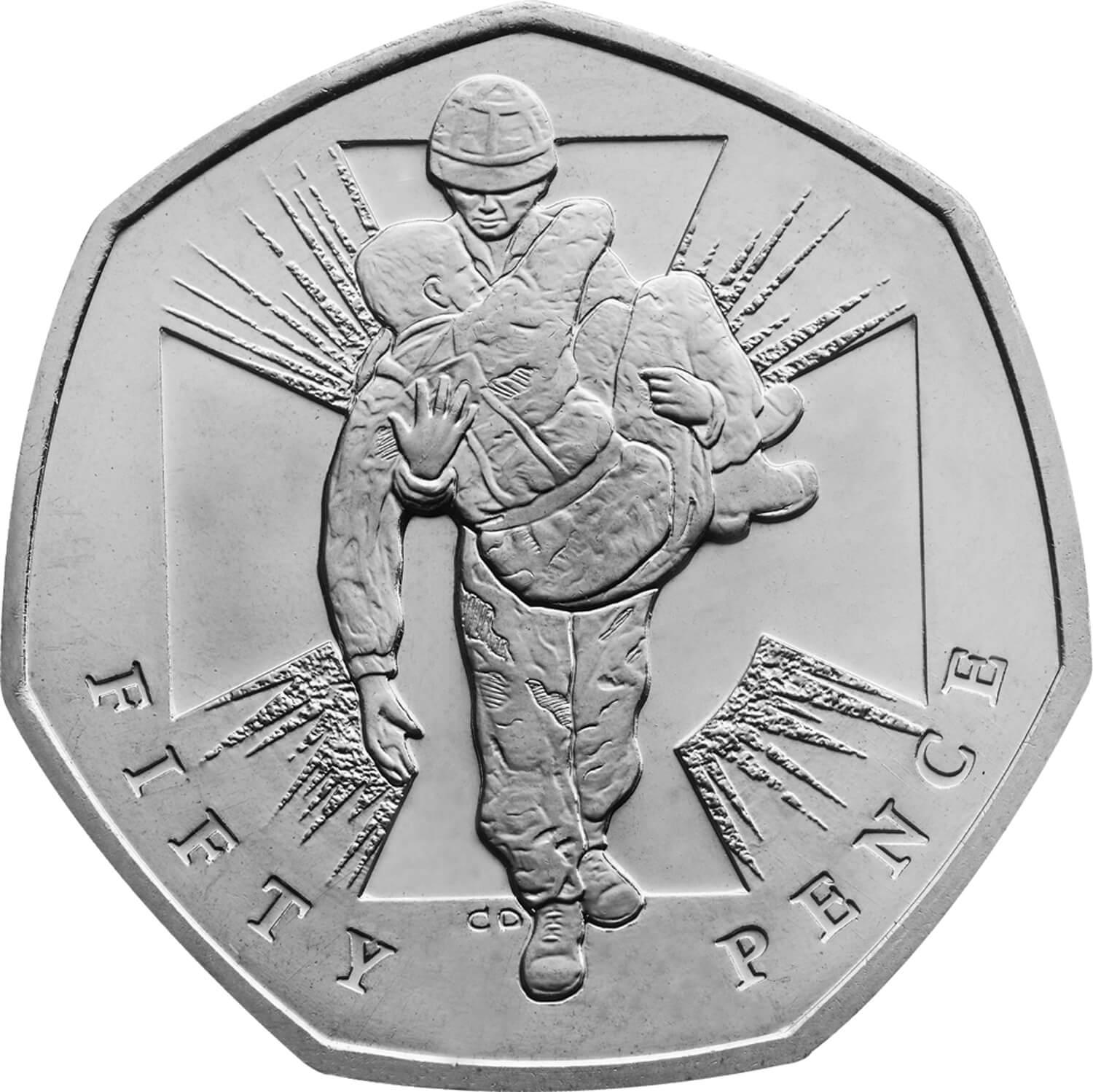 The Victoria Cross (Heroic Acts) 50p coin can often be found in loose change as 10million were minted in 2006.

It was released with another design to mark the 150th anniversary of the Victoria Cross.

It's not particularly rare, and Change Checker classes it as "common," but circulated versions can still sell for up to £1.99 on eBay.

The medal version of the Victoria Cross coins issued in 2006 was more widely circulated, with 12million being minted in 2006.

It's more common than the coin it was released with, the Victoria Cross (Medal) 50p piece, but still fetches up to £1.95 on eBay. 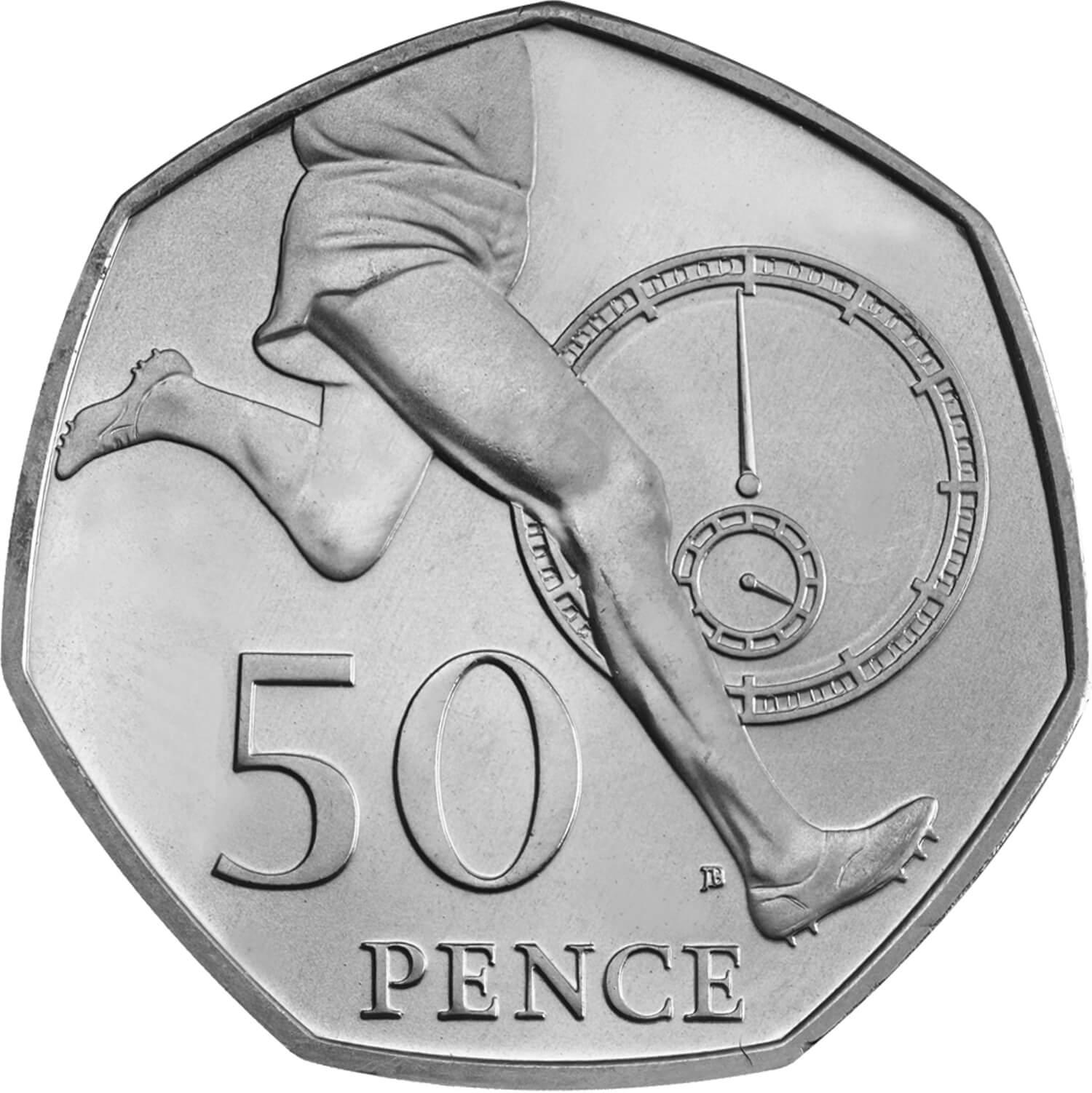 This design was first released in 2004 to commemorate the 50th anniversary of then-medical student Roger Bannister breaking the four-minute mile barrier on May 6, 1954.

Nine million coins entered circulation, making it one of the 50 rarest 50p pieces though Change Checker describes its scarcity as "common".

The highest price it's sold on eBay for recently is £1.20 – more than double its face value. 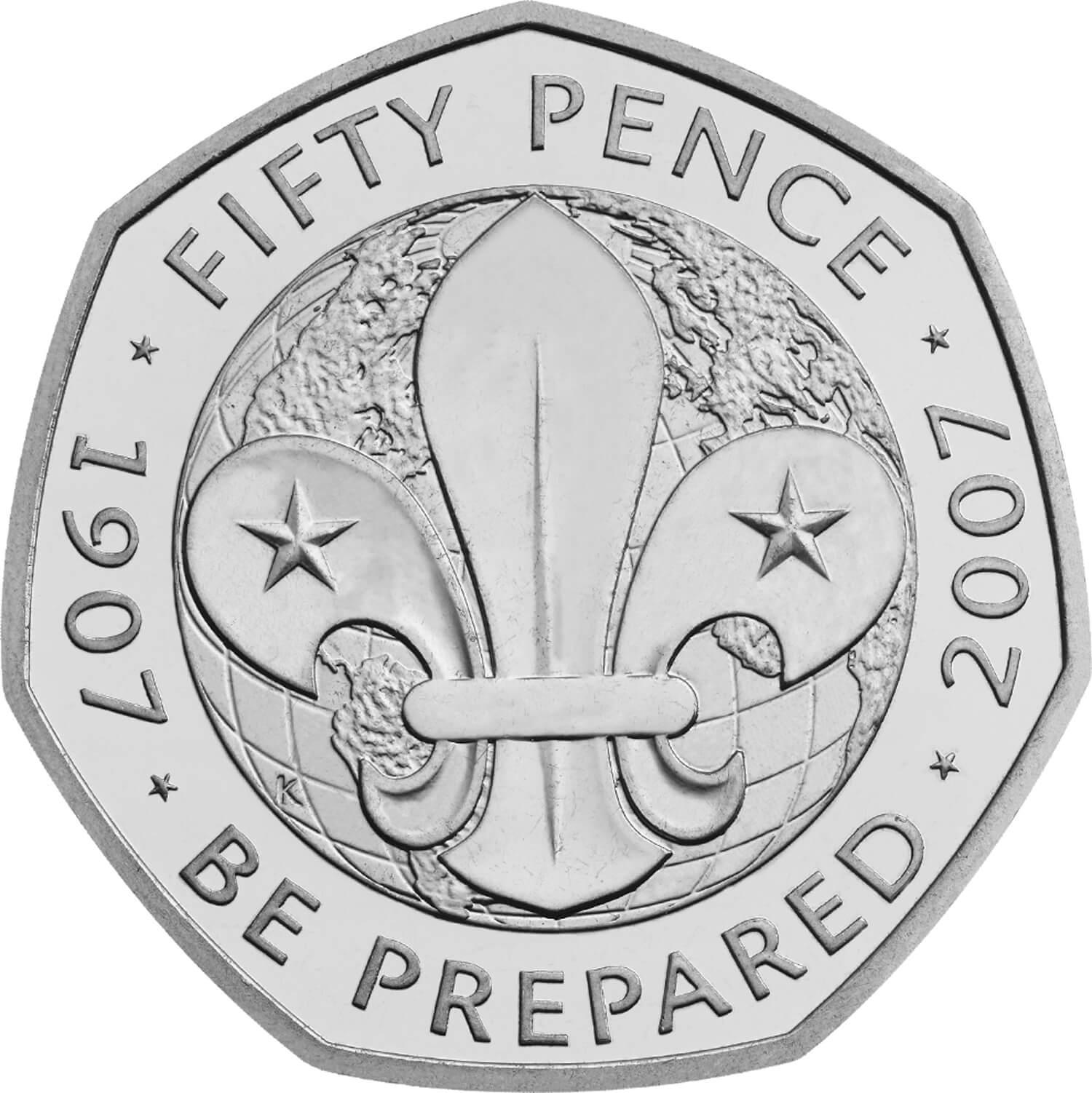 This coin, which will also be reissued, was first released in 2007 to mark 100 years of boy scouting in the UK.

That year, 7.7million coins were issued. It's technically one of the rarest 50p coins in circulation but the scarcity index classes it as "common".

Circulated designs sell for up to £1 on eBay – double its face value. 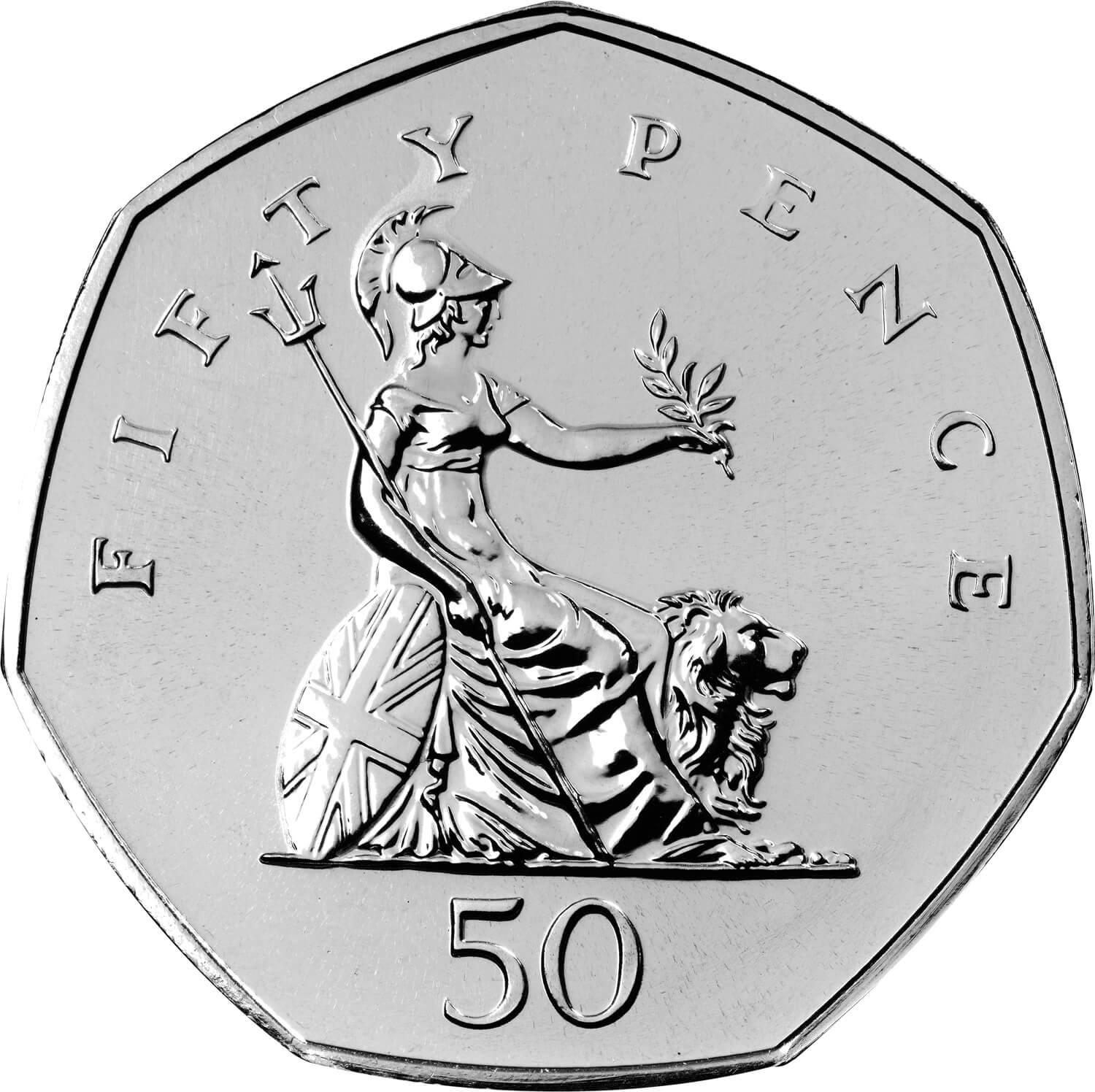 The image of Britannia first appeared on British coinage in 1672 during the reign of Charles II and since then has always been present on at least one denomination.

More than 805million of these coins have entered circulation, so they're not worth much except their face value.

Some collectors do hunt for Britannia coins minted in the last year of its release, 2008, though so it may still be worth looking out for coins from that date.

They haven't sold on eBay recently though so it may not be worth selling them.

Nostalgic coin hunters may want to pick up one of the commemorative Britannia coins when they are reissued next year, though.

The dangers of selling your coins on eBay

The most valuable coins are usually those that have low mintage numbers or those with an error.

These are often deemed the most valuable by collectors.

Sell it at auction

If you’ve got a coin that you would like to sell at auction then you can contact a member of the British Numismatic Trade Association.

They usually deal in very old coins but they may be able to help you assess whether it’s worth selling your coin at auction or whether it would be valuable to collector.

Sell it on eBay

If you want to sell the coin you’ve found in your spare change on eBay then you need to know the risks.

Remember to set a minimum price that is higher or at the very least equal to the face value of the coin.

Even if your coin “sells” on eBay for a high price there’s no guarantee that the buyer will cough out.

It its terms and conditions, the auction website states that bidders enter a “legally binding contract to purchase an item”, but there’s no way to enforce this rule in reality.

The most eBay can do is add a note to their account acout the unpaid item or remove their ability to bid and buy.

This is because in order to sign up to the website users do not need to put in valid bank or PayPal details before making a bid.

If a bidder refuses to pay, then the only option for sellers is to give “second chance offers” to other bidders or relist the item.

For items of a high value eBay recommends that sellers put a limit on their listing to approve bidders.

It means bidders must email you before placing a bid but NOT that they must pay out the cash if they win.

A spokesman from Change Checker said they expect the commemorative coins to be popular.

They said: "We expect the new re-issued coins to be really sought-after by collectors, considering the significance of the coins and in particular the rarity of the original Kew Gardens 50p."

A spokesman from the Royal Mint said: "The 50p was first introduced into circulation in October 1969.

"As part of the 50th anniversary in 2019, the Royal Mint will be developing two sets of 50p commemorative coins marking moments in British culture and the military."

If you want to buy the reissued coins, you can register your interest on the Royal Mint website.

It's not just rare 50p coins that are valuable.

We've also published a guide to the most sought-after £2 coins in circulation.

One pound coins can also be very valuable depending on the design – here's a guide to the rarest coins.

Every year the Royal Mint releases sought-after commemorative coins, and earlier this year we revealed this year's designs.