Brits love a good old barbecue on a summer’s afternoon – sausages, salad and plenty of vino with friends in the garden. There’s something so relaxing about standing around a smoking fire chatting to mates whilst slowly cooking one’s lunch or dinner. I don’t know about you, but the first bbq of the summer is a BIG occasion in our house.

So this got us thinking at HELLO!… do the royal family enjoy barbecuing as much as we do? We can just imagine Prince Charles and Prince William as head grillers discussing the world’s events as they turn over the chops.

Or perhaps – and we hope this is so – Her Majesty the Queen is rather nifty with the tongs and cooks a mean burger.

We had a little scout through old photos of the royals and discovered that, yes, the prestigious family are rather partial to a barbecue just like us. Want to see the evidence? Take a look… 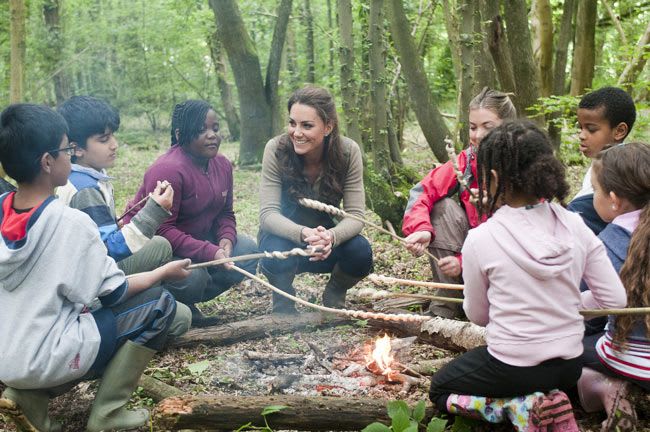 The Duchess enjoyed a BBQ with a local Scouts group

The Duchess of Cambridge isn’t afraid to get stuck in at the grill and likes to get little Prince George, Princess Charlotte and Prince Louis involved in cooking and baking at home.

Back in 2012, queen of the grill Kate volunteered with a local Scouts Association near her home in North Wales, flipping burgers and teaching the children how to gut fish on a beach. “So my 8-year-old stepbrother went over to Kate Middleton’s house last night for a BBQ with his mates. I think I’m about to cry with jealousy,” said @iamleecrimes on Twitter. Imagine!

Prince Philip inspecting the barbeque on a royal engagement

The Queen’s husband was a secret barbecue king! According to Balmoral’s housekeeper Sheena Stuart, the royal couple liked to host relaxing gatherings for friends and family at their Scottish home.

The monarch’s former chef Darren McGrady previously told Marie Claire of the late Philip’s love of cooking food on the barbecue. “Philip would cook out on the grill,” he said.

“He’d come down to the kitchens and discuss what food we’d have: ‘Do we have any salmon that any of the family have caught? The Queen’s been picking strawberries with Princess Margaret, let’s have those for dinner.'”

Prince Harry shared a sweet statement after his grandfather’s death, saying: “He will be remembered as the longest reigning consort to the Monarch, a decorated serviceman, a Prince and a Duke. But to me, like many of you who have lost a loved one or grandparent over the pain of this past year, he was my grandpa: master of the barbecue, legend of banter, and cheeky right ’til the end.”

MORE: How to grocery shop like The Queen! Her Majesty’s favourite British stores revealed Prince Harry gets in the summer spirit for a charity BBQ

We’re not surprised that down-to-earth Harry is a dab hand with the old barbecue tongs. At a charity BBQ at Kensington Palace a few years back, he helped grill the meat as he chatted to sports stars and their families.

We can just imagine the prince cooking supper on the outdoor grill at his Los Angeles home with wife Meghan, son Archie and daughter Lilibet. We wonder if Meghan fights her husband Prince Harry for control of the barbecue? Yes, the Duchess knows how to grill and has previously shared a photo of herself on her now-terminated Instagram page cooking al fresco.

“Lunch of fish tacos and Albarino (a white wine) cooked in my backyard on my ceramic grill,” wrote the royal. Sounds like William and Harry’s childhoods were full of fun outdoor gatherings with their cousins, with dad Charles on the barbecue.

In According to Charles: The Misunderstood Prince, Sally Bedell Smith wrote how the boys spent their days “outdoors on the hills and by the rivers and lakes” and enjoyed barbecues and picnics.

The Duke of Cambridge knows how to barbecue too! On day two of his visit to New Zealand, William donned an apron and did a spot of grilling with the country’s then Prime Minister John Key.