Coming to terms with the enormity of Mother Theresa’s shameful surrender to the EU is difficult enough, even if you live here.

So imagine how baffling our friends elsewhere in the English-speaking world must find it. Time once again to cross to our U.S. affiliate, Eye Witness News, in Palm Beach, for an American perspective . . .

Good Morning, America, how are you? This is your favourite son, Chad Hanging. Let’s go live to London, Englandland, where our special correspondent Brit Limey has been following the Brexit negotiations.

Good morning, Chad. It’s been another hectic weekend here in Jolly Old Brexitland, where President Theresa May has just returned from Brussels with a deal.

Voters were promised that Brexit would mean the Yew-Kay taking back control of its own laws, taxes, money, borders, traditional fishing waters and regaining the ability to strike independent free – trade deals with nations outside Europe. 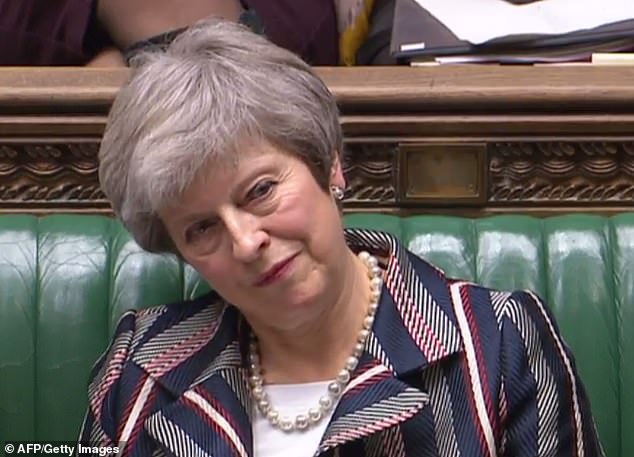 So the Yew-Kay will finally be leaving the Eurovision Union?

President May has agreed to keep the Yew-Kay in the EU for at least another three years and possibly much longer. Like, for ever.

But I thought the people of the Yew-Kay voted to leave in a referendum held in 2016.

Then why is the Yew-Kay still in the EU?

Because President May and most MPs don’t want to leave, so they’ve done everything they can to overturn the result of the referendum. They reckon that the people of the Yew-Kay are too stupid to know what they were voting for and have to be taught a lesson.

But the same people voted for President May and all those MPs in the Houses of Eliot, didn’t they?

Up to a point, Chad. President May got the job by default when President Call Me Dave resigned because he lost the referendum.

So she was on the winning side? She campaigned for Leave?

Nope, Chad. She was for Remain, although she spent most of the campaign hiding behind the couch.

Then how did she manage to become President?

She promised solemnly that Brexit would mean Brexit. 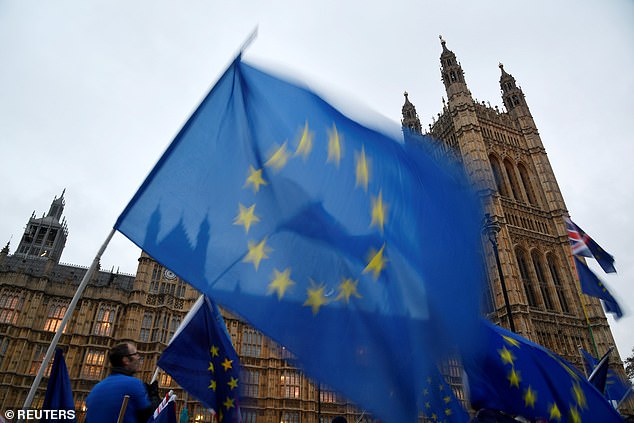 Under President May’s deal, the Yew-Kay will still be subject to the jurisdiction of the Eurovision Court of Justice in Frankburg despite a promise to take back control the country’s own laws. Pictured an anti-Brexit demonstration outside the Houses of Parliament

But you just said that Brexit doesn’t actually mean Brexit.

Not her version of Brexit, anyway, Chad.

Has anybody ever voted for President May?

Depends what you mean by ‘won’, Chad? She actually lost the Conservatives their majority in the Houses of Lords at Winchester.

Then why is she still President?

She formed a coalition with the Democratic Unionist Party, from Northern Irelandland.

Why would the Democrats support a Conservative President?

I always thought the Irish were Republicans, Brit.

Voters were promised that Brexit would mean the Yew-Kay taking back control of its own laws, taxes, money, borders, traditional fishing waters and regaining the ability to strike independent free – trade deals with nations outside Europe.

Run that by me again, Brit. 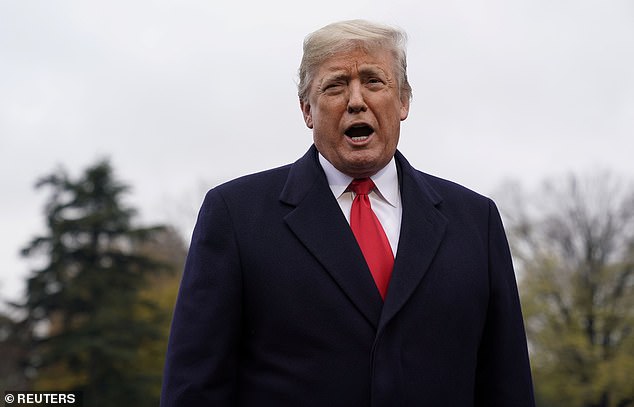 President Trump has said he has a big, beautiful trade deal with the Yew-Kay ready to go. But only if the EU agrees, and only in a few years’ time when Trump has retired to Mar-a-Lago

Under President May’s deal, the Yew-Kay will still be subject to the jurisdiction of the Eurovision Court of Justice in Frankburg and will have to comply with rules drawn up by commissars in Brussels, where the sprouts come from.

That would be like the U.S. having to obey the courts in, say, Venezuela?

And having our laws and taxes handed down by unelected bureaucrats in Mexico?

I guess so, Chad. Plus, most tariffs on trade would still be set by the EU, and the Yew-Kay wouldn’t get any say. They’d just have to collect the cash and send it to Brussels.

Whatever happened to ‘no taxation without representation’?

That’s what the opponents of President May’s deal want to know, too, Chad.

Glad you mentioned that, Chad. When the Yew-Kay went into the EU, the then President Grocer Heath gave away Britain’s fishing waters to foreign trawlers at the last minute. One of the biggest attractions of Brexit was regaining control of fishing.

And that’s going to happen?

Not if the Yew-Kay wants a trade deal with the EU. The French say they will veto any deal unless they get full access to Yew-Kay fish.

Will President May agree to that?

But the Yew-Kay will be free to strike deals with countries outside the EU, like America. President Trump has said he has a big, beautiful trade deal with the Yew-Kay ready to go.

Only if the EU agrees, and only in a few years’ time when President Trump has retired to Mar-a-Lago. By which time, President May will be long gone, too.

So if the Yew-Kay still doesn’t control its own taxes, or laws, or trade deals, surely it can control its borders.

What does that mean, Brit?

If the Yew-Kay wants to carry on trading with the EU, they will have to accept free movement, something President May said was a red line.

President May started off with plenty of red lines, Chad. And she’s rubbed out pretty much all of them in her desperation to do a deal. So who knows?

Where does that leave control of the borders, then?

Your guess is as good as mine, Chad. But it’s not as simple as sending the National Guard to Mexico. Brussels has suggested the Yew-Kay builds a border in the Irish Sea, which would effectively leave Northern Irelandland in the EU in perpetuity.

How has that gone down with the Irelandland Democrats?

No surrender! They’re threatening to pull out of the coalition and collapse the Government.

She wants to bring in a backstop.

As I said, it’s complicated. But it could mean the whole of the Yew-Kay staying in the EU.

And what about the money the Yew-Kay sends to Brussels, Brit?

I nearly forgot, Chad. President May has agreed to pay the EU something in the region of $60 billion in exchange for this deal.

Lemme get this straight. She’s proposing to pay Brussels $60 billion for a deal that gives the Yew-Kay practically nothing in return and keeps it locked in to the EU, like, for ever?

That’s about the size of it. Chad.

All this after 17.4 million people voted Leave, in the biggest single democratic exercise in the Yew-Kay’s history?

How does President May think she’s going to get this so-called deal through Parliament?

It won’t be easy, Chad. As well as the Northern Irelandland Democrats, around 90 Conservatives have said they will vote against the deal. Mrs May is warning that unless they back her they will end up with a Marxist Labour government, led by Jeremy Clarkson, from Top Gear.

And what does she propose to do if they still decide to vote against her?

She’s appealing for support from Labour members of the Houses of Fraser.

You’re kidding me, Brit. To stop Britain falling into the hands of Labour, she’s appealing to Labour MPs?

And does she think the British people will swallow it?

She says that it’s the only deal on offer and if they don’t take it, they’ll run out of clean drinking water in 48 hours.

And is that true?

Of course not. Anyway, she believes they’re bored with Brexit and would rather watch Harry Redfern, a soccer coach, eating caterpillars on I’m A Celebrity, or vote for some people you’ve never heard of on Strictly, which is what the Brits call Dancing With The Stars.

Holy Bruno Tonioli! This is the country of Dunkirk, Darkest Hour and Magna Get Carter. Whatever became of the cradle of Western democracy, which stood alone to defend freedom in 1940? Now they’re crawling on their hands and knees to a corrupt, anti-democratic, imperialist racket in Brussels.

And these are the guys who dare to laugh at us for electing Donald Trump!