Randolph L. Braham, who as the foremost American scholar of the Holocaust in Hungary, his homeland, rejected that country’s highest award to protest what he denounced as a whitewash of its collusion in the murder of hundreds of thousands of Jews during World War II, died on Sunday at his home in Forest Hills, Queens. He was 95.

His son Robert said the cause was heart failure.

Professor Braham (pronounced bra-HAM) had felt too weak on the eve of a farewell speech he was scheduled to deliver on Nov. 14 at the Rosenthal Institute for Holocaust Studies, which he founded at the Graduate Center of the City University of New York in Manhattan. He canceled the lecture and was hospitalized the next day.

The title of the speech, “The Struggle Between the History and Collective Memory of the 20th Century: The Holocaust vs. Communism,” encapsulated the competing visions that Professor Braham, a Holocaust survivor himself, sought to reconcile in the more than 60 books he wrote or edited.

His monumental “The Politics of Genocide: The Holocaust in Hungary” (1981) and his three-volume “The Geographical Encyclopedia of the Holocaust in Hungary” (2013) provided the basis for what Prof. Maria M. Kovacs of Central European University, in welcoming him to Budapest last year, described as “an immensely precise, panoramic and microscopic study of the Hungarian Holocaust.”

She characterized Professor Braham as “a moral compass for our profession.”

Professor Braham was outraged at the time by what he described as attempts by Hungary’s current nationalist government to equate the murder of nearly 600,000 Jews in Hungary with the suffering of other Hungarians under the German occupation — “a German occupation, as the record clearly shows, that was not only unopposed but generally applauded” by the country’s wartime regime, he wrote.

In response he publicly returned the Order of Merit he had received for his research in 2011. He also asked that his name be removed from the Library and Information Center of the Holocaust Memorial Center, or Holokauszt Emlekkozpont, in Budapest, the country’s capital.

“I realize that for a variety of political and economic reasons the leaders responsible for the operation of the Holokauszt Emlekkozpont would or could not speak out against the brazen drive to falsify history,” he wrote to the president of the center. “I, on the other hand, a survivor whose parents and many family members were among the hundreds of thousands of murdered Jews, cannot remain silent, especially since it was my destiny to work on the preservation of the historical record of the Holocaust.”

Professor Braham conducted that work over three decades, from 1962, when City College hired him to be a lecturer, until 1992, when he retired as a distinguished professor of political science there. He founded the Rosenthal Institute in 1979 and continued to serve as its director.

Frances Degen Horowitz, the president emerita of the Graduate Center, added that while Professor Braham had painstakingly documented the past, he had also shown “a keen eye for current events, calling out those events and actions that portend a repetition of some of the devastating events of the past." 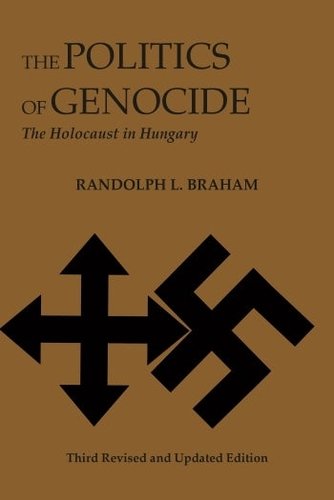 Professor Braham was born Adolf Abraham on Dec. 20, 1922, in Bucharest, Romania, to Lajos and Eszter (Katz) Abraham. He grew up poor in Dej, a small city in Transylvania. His father was a laborer, and his mother was a homemaker in a house that had no electricity.

After Hungary seized control of the region in 1940, their son was barred from public high school because he was Jewish. His parents, who could not afford tuition at a religious school, registered him at an independent school, where he could fulfill assignments without attending classes.

From 1943 to 1945 he was forced to serve in a Hungarian army slave labor battalion in Ukraine. Captured by the Soviets, he escaped and was sheltered by a Hungarian Christian farmer, Istvan Novak, who was later honored by Israel as a Righteous Among the Nations, an award given to non-Jews who risked their lives to rescue Jews during World War II.

With the war over, he returned to Dej to discover that his parents had been deported and killed at Auschwitz. They had been among the first Jews shipped there from Northern Transylvania in 1944 after Germany, afraid that Hungary was bolting the Axis cause, invaded the country and began rounding up the Jews whom the government had persecuted but not deported. His sister, also sent to Auschwitz, survived.

Making his way to Berlin, Professor Braham served as a translator for the United States Army. He emigrated to the United States in 1948 and became a citizen in 1953, at that point changing his name to Randolph Louis Braham.

He earned a bachelor’s degree in economics and government and a master of science in education from City College. In 1952 he received a doctorate in political science from the New School for Social Research (now the New School).

His marriage to Elizabeth Sommer, another Holocaust survivor, ended when she died in 2014. In addition to their son Robert, Professor Braham is survived by another son, Steven; two grandsons; and his partner, Mary Maudsley, a retired lawyer.

At City College, Professor Braham taught comparative politics and Soviet studies and was chairman of the political science department. He also provided the historical narrative in “The Last Days,” James Moll’s Oscar-winning 1998 documentary, produced by Steven Spielberg, on the Holocaust in Hungary.

Professor Braham dedicated “The Politics of Genocide” to his parents.

“At a time when quack ‘history’ books maintaining that the Holocaust was all in the fevered Zionist imagination reach library shelves all over the world,” Elenore Lester wrote in The New York Times Book Review, “it is a comfort that this book will stand there, too, in its immense and meticulous documentation.”

In the book, Professor Braham appraised the world’s response to the Holocaust unsparingly.

“The leaders of the free world, including those of the Vatican and the International Red Cross, attached no particular urgency to the rescuing of Jews,” he wrote, and the Allies “were reluctant to liberalize their immigration policies.”

They “also refused to divert resources from their war effort,” he added, “arguing — not without merit — that the quickest possible defeat of Nazi Germany was also in the best interests of the oppressed Jews.”

Professor Braham “loved Hungary, and he wanted to shield us against the resurrection of our darkest demons,” Andras Heisler, president of the Association of Hungarian Jewish Religious Communities, wrote this week on the website Hungarian Spectrum.

“Thanks to Professor Braham, we will never be able to free ourselves from the truth.”