QUENTIN LETTS: What a thesp! John McDonnell’s performance in the Budget debate was fit for the West End

John McDonnell has become a rare ham at the despatch box. Rare as Gloucester Old Spot. His purpose is to make us feel wretched and believe that the poor are being treated as badly as Dickensian urchins.

To this end, Shadow Chancellor McDonnell, who opened yesterday’s continuing debate on the Budget, used all manner of actorly tricks.

His public image may be that of a dogmatic crypto-communist theorist but there is something shrewd about him as a parliamentarian. He has become a right thesp.

Yesterday, speaking of children being taken into care, he dropped his volume and added a little check at the front of his throat, to suggest that he was moved to emotion. 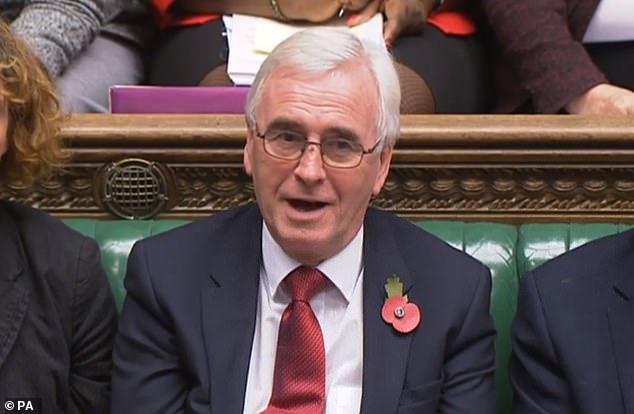 It was an issue he returned to after an intervention from Angela Eagle (Lab, Wallasey). Mr McDonnell wrenched himself into a state of increasing dudgeon.

When a Conservative Member tried to intervene, this only gave his pulpiteer’s vexation another jolt of energy. ‘No!’ he cried, refusing to let the wicked Tory speak. ‘We have a record number of children coming into care.’

As he said this he thrust his right arm up and down and cast his head to one side, barely able to look at the ministers opposite him. ‘I KNOW what it seems for a child coming into care,’ he thundered, real fury in his timbre. ‘You’re scarred for life!’

One did not need to be a Corbynite – I am not – to be struck by the oratorical moment. And when Mr McDonnell spat out, with a small grunt, that Philip Hammond had included lavatorial jokes in his Budget speech on Monday, there was an undeniable gulf between the moral fervour of this Labour man and the levity which had been adopted by the Chancellor doing his Leslie Crowther routine impression on Monday. That gulf did Mr Hammond few favours.

Mr McDonnell avoided mentioning the Budget’s tax cuts. Had Tory backbenchers been more clever they might have asked him about this, for it has split Labour.

Mr McDonnell had said on the morning’s wireless that he would not block the tax cuts; other Labour MPs want to do that. 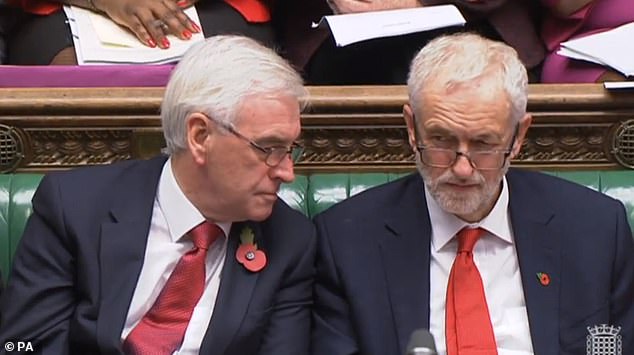 Mr McDonnell avoided mentioning the Budget’s tax cuts. Had Tory backbenchers been more clever they might have asked him about this, for it has split Labour

Perhaps that was why the Labour benches were far from full. Higher parts of the Opposition side were unusually empty for such an event.

Tory MPs kept interrupting Mr McDonnell, among them Chris Philp (Croydon S), whose staccato manner, and a brow riven with frowns, calls to mind Capt Darling in the Blackadder films.

So worried-looking, he could be a man in need of Pepto Bismol who has just been told that his Tube train is delayed in a tunnel for 15 minutes.

The one good thing for the Conservatives yesterday was Health Secretary Matt Hancock, as sparky and optimistic as Mr McDonnell was glum. Mr Hancock is sharp enough to be able to glance at a table of official figures and cite them in detailed argument.

Hancock’s friskiness aside, the afternoon was infected by Mr McDonnell’s pessimism. Nothing was good about the economy. Or life! George Freeman (Con, Mid Norfolk), an equable sort, asked: Was there nothing McDonnell could welcome in the Budget? 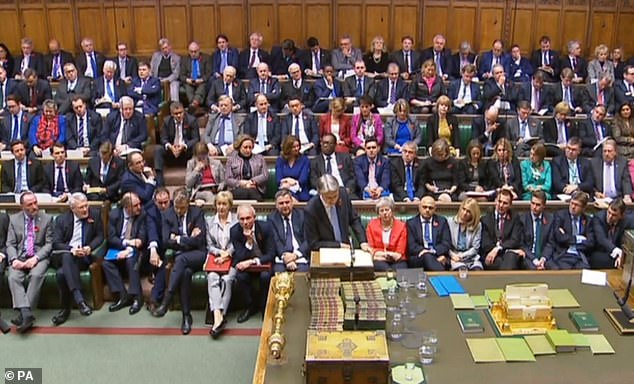 Getting the Beeb to say ‘austerity’ instead of ‘deficit reduction’ has been a propaganda triumph for the Left. Now even the May Government uses it

What about the extra money for mental health? Mr McDonnell growled that the money was not enough.

It never is. This is the magical thing about that politicised term ‘austerity’ which Labour and the BBC have long used as a synonym for ‘reductions in public spending’. Getting the Beeb to say ‘austerity’ instead of ‘deficit reduction’ has been a propaganda triumph for the Left. Now even the May Government uses it.

But ‘austerity’ can mean anything to a Labour MP. There is no statistical definition of ‘austerity’. ‘Austerity was always a bad idea,’ grunted Mr McDonnell, sullen-voiced, tight-lipped, glowering up at his eyebrows.

It had been caused not by past Labour Chancellors but by ‘the Tories’ casino economy of the 1980s’. Mention of Thatcherite days had an electric effect. Five Tories sprang to their feet to complain. Mr McDonnell gave a wintry smile.