‘Sitting next to a gold piano was tone deaf!’ Queen’s speech is branded a ‘PR disaster’ as lavish backdrop sparks an angry backlash on Twitter – but some PRAISE the monarch for speaking out on social issues

This year’s Queen’s speech has sparked an angry backlash on social media – because the monarch addressed the nation on social issues while sat in front of a gilded piano.

The 92-year-old’s annual Christmas Day speech, which placed her in the ornate surroundings of the White Drawing Room in Buckingham Palace, saw her discussing heavyweight subjects such as ‘tribalism’ while perched in front of the 19th century gold piano originally made for Queen Victoria.

The sight of the extravagant musical instrument prompted discussion over whether it was the right backdrop for a speech that addressed rich and poor on Christmas Day, with many struggling with austerity. 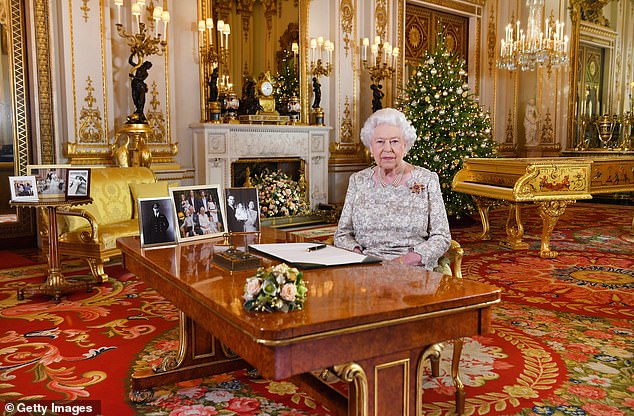 Out of tune? The Queen delivered her annual Christmas message surrounded by photographs of her family, with a Christmas tree behind her and as well as the eye-catching gilded piano, which was made for Queen Victoria in 1856 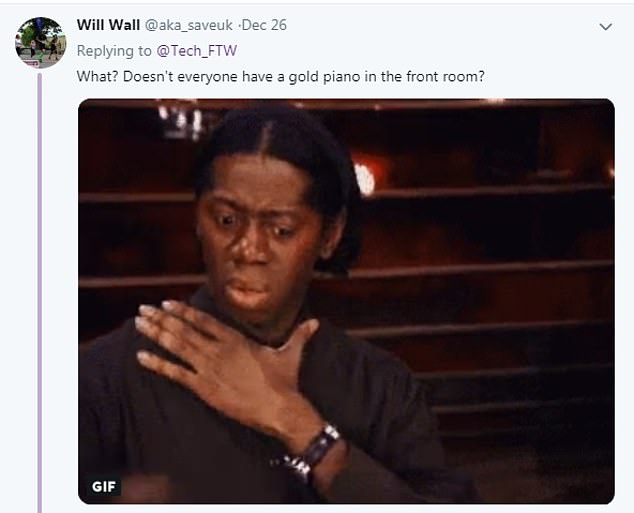 Perched next to a writing desk, the Queen wore a silk and lace cocktail dress by Angela Kelly, and a gold, ruby and diamond brooch – a present from her husband Prince Philip in 1966.

@Tech_FTW wrote: ‘I liked the bit where she was sitting on a gold chair in a gold room with her gold fire guard and gold clock in front of a gold mirror beside the gold piano writing with her gold pen next to the gold picture frame wearing her gold bracelet talking about poverty #QueensSpeech’.

Although the Queen didn’t address poverty directly, she did talk about the need to ‘respect other human beings’ but for some, the setting was ‘tone deaf’ to the Queen’s words.

@StephenBlakeman wrote: ‘No doubt it’s a PR car crash. Whoever had the bright idea to place her like that, surrounded by such a display of wealth, will probably be looking for a new job in the New Year.’

@beanrulechester added: ‘The ironic thing about the Queen recording her message in front of a gold plated musical instrument is that it was a bit tone deaf.’ 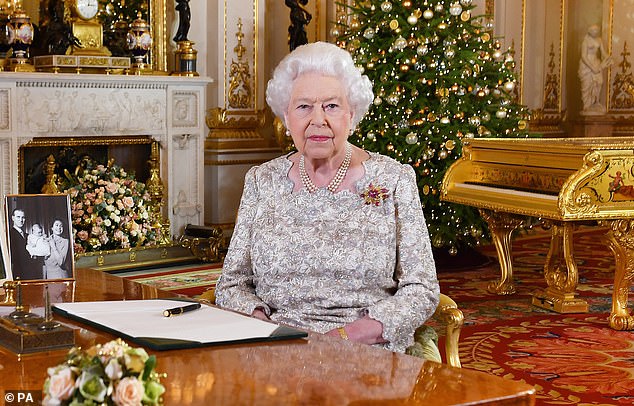 While Twitter has been awash with comments suggesting the choice of backdrop was unwise, many have defended the Queen, joking that she’s unlikely to present the annual speech from a ‘bedsit in Peckham’

DECORATED WITH CHERUBS AND DATING BACK TO 1854, THE PIANO THAT’S SPARKED A CONCERTO OF COMMENTS

Bought by Queen Victoria in 1856, the piano isn’t, as some on Twitter have claimed, entirely made of gold.

Comprising pine, satinwood and mahogany, it is mounted on brass and gilt bronze and has a gilded finish. 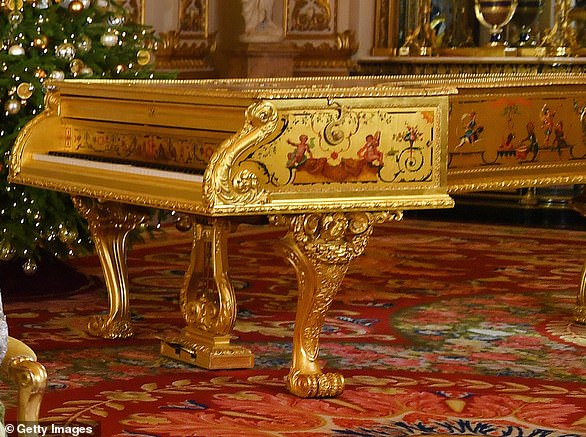 The instrument was restored in 2010 and took pride of place in the Victoria and Albert exhibition held in the Queen’s Gallery.

Highly decorated, the 19th century piano features monkeys and cherubs, something which attracted Queen Victoria to it in the first place.

However, others defended the Queen, saying it’s not unexpected that she might live in luxury.

@blackbear001 penned: ‘Most golden people would never acknowledge the existence of poverty. Brava, Queen Elizabeth! And thanks for all your activities that highlight and alleviate poverty in United Kingdom and elsewhere in our world.’

@sarahgayle695 wrote: ‘To have a queen and treat her like one and then complain that her lifestyle is to fancy…it’s annoying. Don’t have a monarchy then.’

@Bunnyaimee added: ‘But she already OWNS these things? By throwing away a piano it isn’t helping anyone, it’s just one less item in her home. As a disabled person myself yes it is difficult because my entire life costs more than your average life, but I’m not angry because the queen has a gold piano.’

The broadcast was recorded on December 12 and produced this year by Sky News. It ended as it had begun, with singing from the choir of King’s College, Cambridge.

What did the Queen say? Her 2018 Christmas message in full

‘For many, the service of Nine Lessons and Carols from King’s College, Cambridge, is when Christmas begins. Listened to by millions of people around the world, it starts with a chorister singing the first verse of Once in Royal David’s City.

‘The priest who introduced this service to King’s College chapel, exactly one hundred years ago, was Eric Milner-White. He had served as a military chaplain in the First World War. Just six weeks after the Armistice, he wanted a new kind of service which, with its message of peace and goodwill, spoke to the needs of the times.

‘Twenty eighteen has been a year of centenaries. The Royal Air Force celebrated its 100th anniversary with a memorable fly-past demonstrating a thrilling unity of purpose and execution. We owe them and all our Armed Services our deepest gratitude.

‘My father served in the Royal Navy during the First World War. He was a midshipman in HMS Collingwood at the Battle of Jutland in 1916. The British fleet lost 14 ships and 6,000 men in that engagement. My father wrote in a letter: ‘How and why we were not hit beats me’. Like others, he lost friends in the war.

‘At Christmas, we become keenly aware of loved ones who have died, whatever the circumstances. But, of course, we would not grieve if we did not love.

‘Closer to home, it’s been a busy year for my family, with two weddings and two babies, and another child expected soon. It helps to keep a grandmother well occupied. We have had other celebrations too, including the 70th birthday of The Prince of Wales.

‘Some cultures believe a long life brings wisdom. I’d like to think so. Perhaps part of that wisdom is to recognise some of life’s baffling paradoxes, such as the way human beings have a huge propensity for good, and yet a capacity for evil. Even the power of faith, which frequently inspires great generosity and self-sacrifice, can fall victim to tribalism.

‘But through the many changes I have seen over the years, faith, family and friendship have been not only a constant for me but a source of personal comfort and reassurance.

‘In April, the Commonwealth Heads of Government met in London. My father welcomed just eight countries to the first such meeting in 1948. Now the Commonwealth includes 53 countries with 2.4 billion people, a third of the world’s population.

‘Its strength lies in the bonds of affection it promotes, and a common desire to live in a better, more peaceful world. Even with the most deeply held differences, treating the other person with respect and as a fellow human being is always a good first step towards greater understanding.

‘Indeed, the Commonwealth Games, held this year on Australia’s Gold Coast, are known universally as the Friendly Games because of their emphasis on goodwill and mutual respect.

‘The Christmas story retains its appeal since it doesn’t provide theoretical explanations for the puzzles of life. Instead it’s about the birth of a child and the hope that birth 2,000 years ago brought to the world. Only a few people acknowledged Jesus when he was born. Now billions follow him.

‘I believe his message of peace on earth and goodwill to all is never out of date. It can be heeded by everyone; it’s needed as much as ever.

‘A very happy Christmas to you all.’