‘Those are impressive sideburns!’ Harry banters with a bearded Chelsea Pensioner during his D-Day visit – and tells another veteran he’s ‘lucky’ to have three nurses looking after him

The Duke of Sussex was at his charming best as he met Chelsea Pensioners on a royal visit today.

Prince Harry, 34, bantered with military veterans and staff during a visit to the Royal Hospital Chelsea, in London, to mark the 75th anniversary of the D-Day Landings.

Making his way down a line-up, Harry joked with one veteran named John about his sideburns, telling him: ‘They’re very impressive’.

When John told the prince he sleeps with ‘one eye open’ Harry agreed he must, or else another resident ‘might shave them off’.

Scroll down for more videos 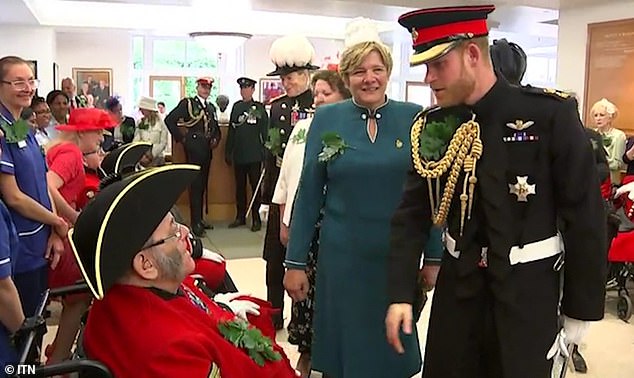 Making his way down a line-up at the Royal Hospital Chelsea, Harry joked with one veteran named John (pictured) about his sideburns, telling him: ‘They’re very impressive’ When John told the prince he sleeps with ‘one eye open’ Harry agreed he must, or else another resident ‘might shave them off’, while gesturing at his own beard (as seen above) 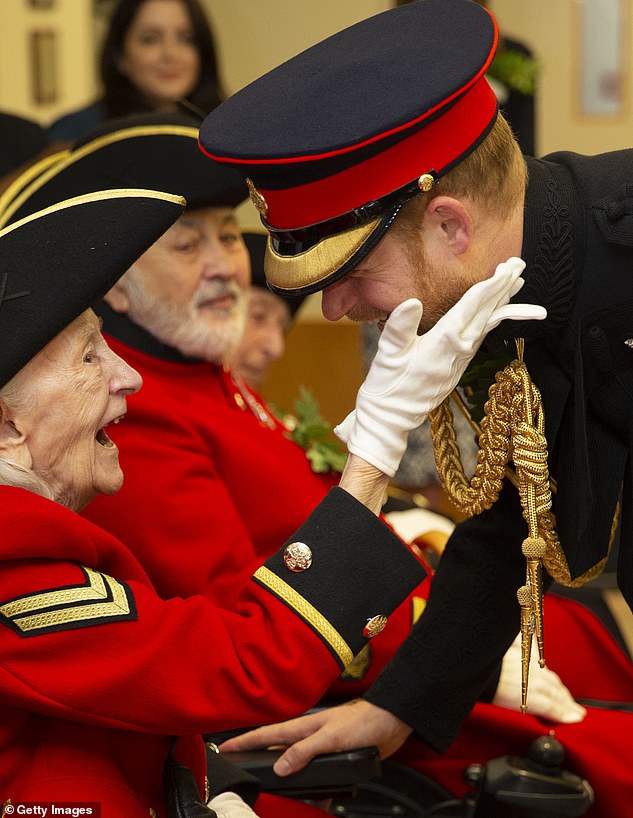 Prince Harry was charmed by Chelsea Pensioner Pauline, pictured, during his visit to the Margaret Thatcher Infirmary, on the grounds of the Royal Hospital Chelsea

Prince Harry was at the Royal Hospital Chelsea to review its legendary scarlet-coat wearing residents on their annual Founder’s Day Parade, which commemorates King Charles II founding the institution in 1681.

It is the nation’s most famous retirement and nursing home for servicemen and women and currently houses some 300 veterans.

The prince said: ‘I think we should all be incredibly proud and grateful knowing that 46 of you here fought in the Second World War; many of you in other conflicts including Korea, Malaya, Borneo and that the ‘youngsters’ among you wear Northern Ireland, South Atlantic and First Gulf War Medals with pride.

‘On this 75th Anniversary of D-Day, I can comfortably speak for everyone when I say we are honoured to be in the presence of six Normandy Landing veterans.

The Duke of Sussex also stopped to chat to Keith ‘Fred’ Brunger, 91, a resident of the home for 14 years, who was making Royal British Legion poppies 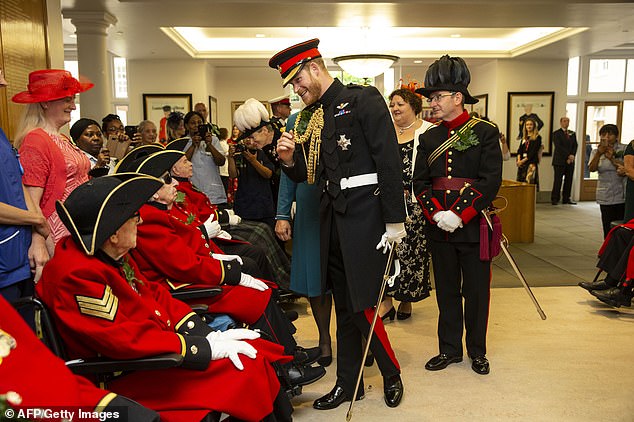 Prince Harry, 34, bantered with military veterans and staff as he made his way down a line-up in the hospital, pictured 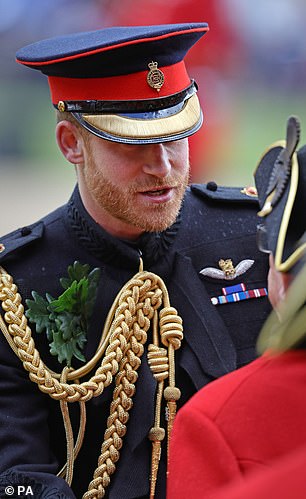 Prince Harry joined Pensioners in wearing a sprig of oak leaves (as seen left and right) in honour of Charles II, who hid under an oak tree to avoid being captured by Parliamentary forces after the Battle of Worcester in 1651 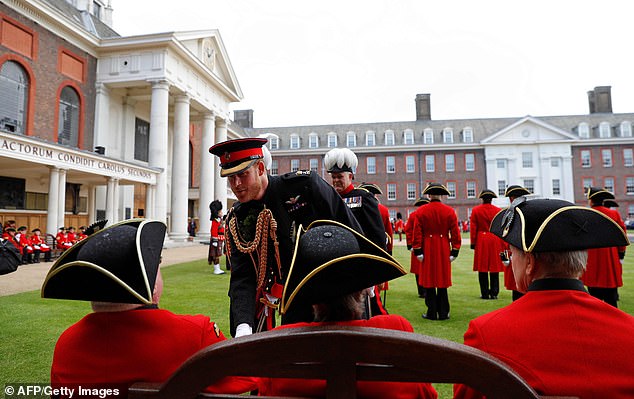 ‘To all who are on parade today, I can only say that you are a constant reminder of the great debt we owe those who have served this nation.

‘You embody the fitting home that awaits them in the peace and tranquillity of the Royal Hospital, should they want it.

‘But more widely, wherever you are, your presence is a symbol of the sacrifices that have been made by all veterans to sustain the freedoms and democracy we value so deeply today.’

The prince, wearing the ceremonial frock coat of his former regiment, The Blues and Royals, looked delighted to be in the company of so many distinguished men and women. 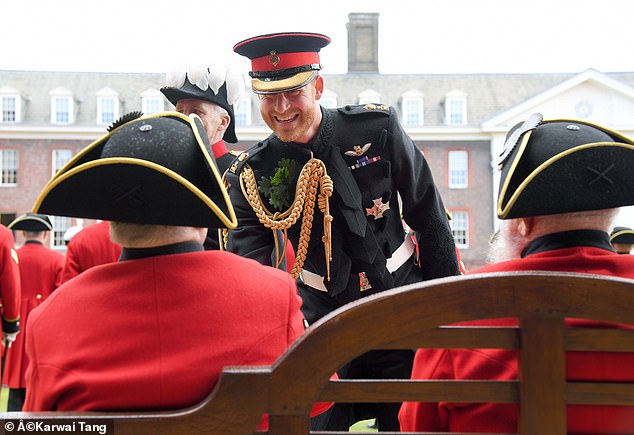 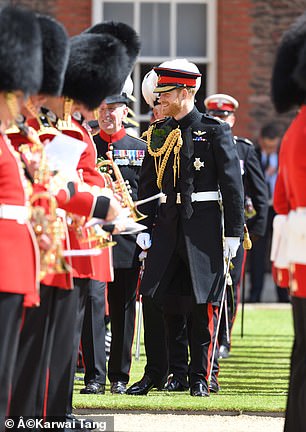 The Duke of Sussex represented the Royal Family at the event, which marks the founding of the Royal Hospital Chelsea. This year it coincides with the 75th anniversary of D-Day, and veterans who served in the Normandy landings are taking part 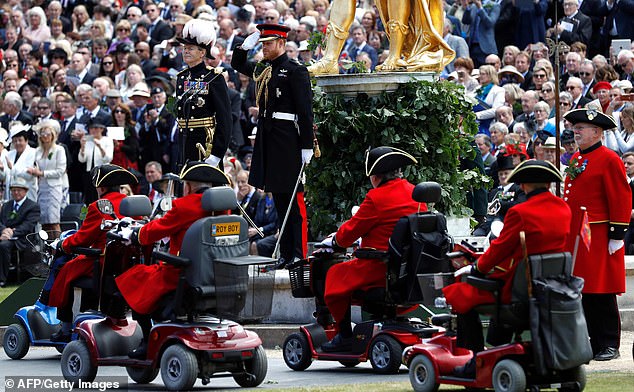 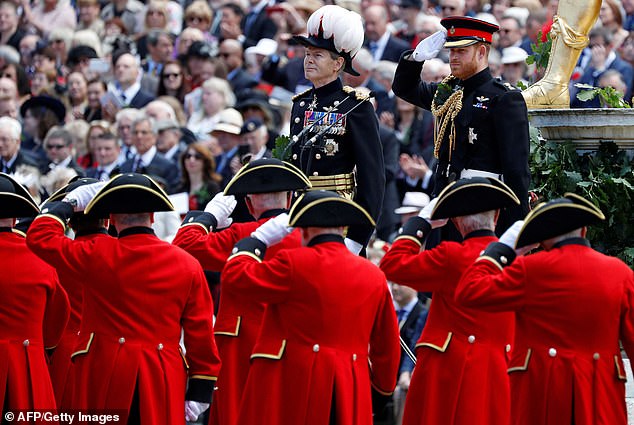 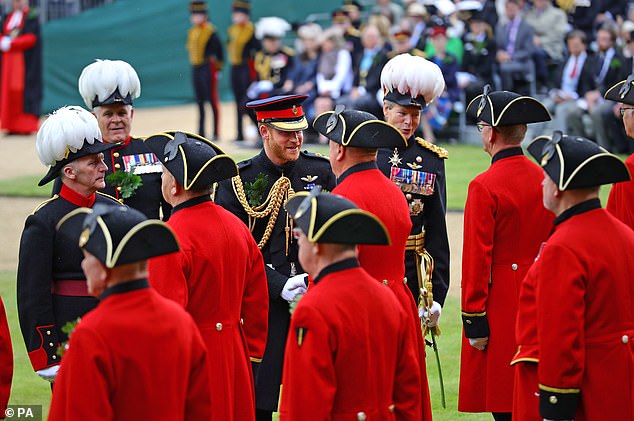 The Royal Hospital Chelsea Founder’s Day celebration is held annually. This year the prince also used the opportunity to pay tribute to those who fought in the D-Day landings. There were six D-Day veterans present at the event today

As he arrived at the home there was time to meet some of the pensioners in their home surroundings.

Speaking to nurses coming off the night shift, Harry asked if the residents had been behaving themselves at night.

When the women responded they had, Harry looked at them incredulously.

Harry also introduced himself to Cedric ‘Frank’ Swift, 90, who asked by the prince how he was. ‘Not very well – I can’t walk!’, he roared, making the royal visitor guffaw with laughter.

He also stopped to chat to Keith ‘Fred’ Brunger, 91, a resident of the home for 14 years, who was making Royal British Legion poppies. 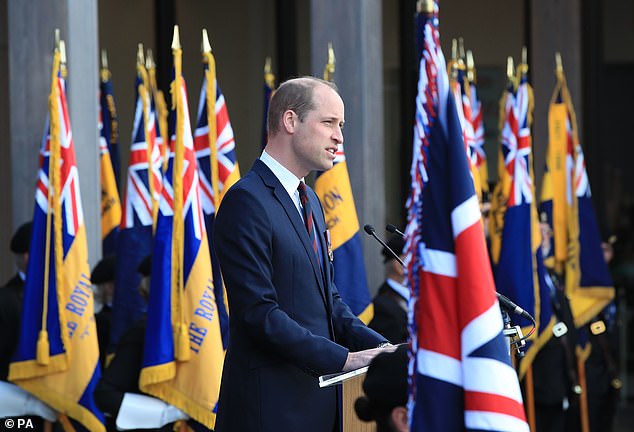 Prince William, 36, delivered the same D-Day address made by his great-grandfather George VI on the day of the 1944 invasion as he led a service at the National Memorial Arboretum in Staffordshire 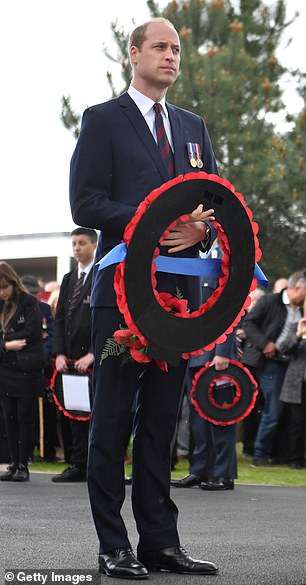 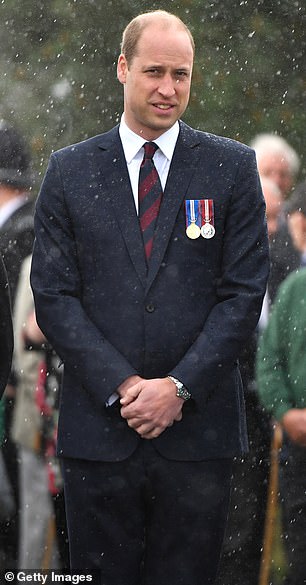 The Duke of Cambridge holds a poppy wreath before laying it at the Normandy Campaign Memorial at the National Memorial Arboretum today, left. Right, the Prince takes a moment to reflect during proceedings 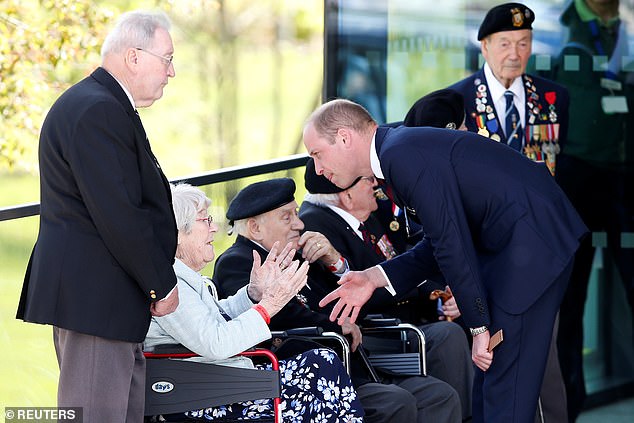 ‘A supreme test has to be faced’: George VI’s speech delivered on D-Day – and spoken by William today 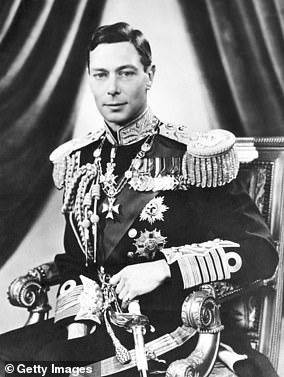 King George VI, pictured, the Queen’s father, delivered a rousing speech to the nation on D-Day. His words were repeated by great-grandson Prince William at the 75th anniversary event today

Four years ago, our Nation and Empire stood alone against an overwhelming enemy, with our backs to the wall. Tested as never before in our history, in God’s providence we survived that test; the spirit of the people, resolute, dedicated, burned like a bright flame, lit surely from those unseen fires which nothing can quench.

Now once more a supreme test has to be faced. This time, the challenge is not to fight to survive but to fight to win the final victory for the good cause. Once again what is demanded from us all is something more than courage and endurance; we need a revival of spirit, a new unconquerable resolve. After nearly five years of toil and suffering, we must renew that crusading impulse on which we entered the war and met its darkest hour. We and our Allies are sure that our fight is against evil and for a world in which goodness and honour may be the foundation of the life of men in every land.

That we may be worthily matched with this new summons of destiny, I desire solemnly to call my people to prayer and dedication. We are not unmindful of our own shortcomings, past and present. We shall ask not that God may do our will, but that we may be enabled to do the will of God: and we dare to believe that God has used our Nation and Empire as an instrument for fulfilling his high purpose.

I hope that throughout the present crisis of the liberation of Europe there may be offered up earnest, continuous and widespread prayer. We who remain in this land can most effectively enter into the sufferings of subjugated Europe by prayer, whereby we can fortify the determination of our sailors, soldiers and airmen who go forth to set the captives free.

The Queen joins with me in sending you this message. She well understands the anxieties and cares of our womenfolk at this time and she knows that many of them will find, as she does herself, fresh strength and comfort in such waiting upon God. She feels that many women will be glad in this way to keep vigil with their menfolk as they man the ships, storm the beaches and fill the skies.

At this historic moment surely not one of us is too busy, too young or too old to play a part in a nationwide, perchance a worldwide, vigil of prayer as the great crusade sets forth. If from every place of worship, from home and factory, from men and women of all ages and many races and occupations, our intercessions rise, then, please God, both now and in a future not remote, the predictions of an ancient Psalm may be fulfilled: ‘The Lord will give strength unto his people: the Lord will give his people the blessing of peace.’

Harry helped the former solider with the Royal Electrical and Mechanical Engineers make one of his flowers using a simple round wooden instrument.

‘I asked him if he would like to make one and he did,’ he said and was particularly impressed that the prince politely took one glove off to do it.

On the parade ground, Harry stood and saluted and groups of the the smartly uniformed pensioners either walked or drove past on their identical red electric scooters.

They included Britain’s Got Talent winner Colin Thackery, 89, who last week won the ITV talent show’s £250,000 prize and a spot performing in front of the Queen at the Royal Variety Performance.

He then encouraged those fit enough to stand in recognition of the veterans and ‘those who have sacrificed their lives for our freedom’.

Among those he spoke to was Ernest Boyden, 94, originally from Brixton, who was wireless operator with the Royal Horse Artillery and took part in the Normandy Landings. He was shot in the right arm during the conflict.

He said afterwards: ‘it was a strange feeling at the time. I feel very proud now, of course. The point of it was so that you younger people could enjoy life.’

Meanwhile in Staffordshire William laid a wreath at the Normandy Campaign Memorial, along with dignitaries and veterans.

A personal message from the Duke of Cambridge, attached to the poppy wreath, read: ‘In memory of all those who have made the ultimate sacrifice. We will remember them. William.’