Under questioning from Labor senator Kristina Keneally on Tuesday, Senator Colbeck said while he personally felt "every single one" of the almost 700 aged care deaths during the pandemic, he had at no point offered his resignation as minister. 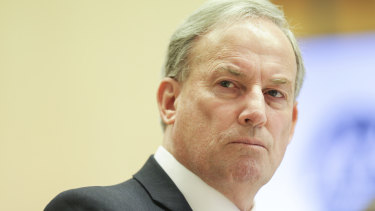 Aged Care Minister Richard Colbeck told Senate estimates 2194 aged care staff in Victoria had contracted the virus and all but three had since recovered.Credit:Alex Ellinghausen

"I don't feel responsible personally for the deaths that have occurred, as tragic as they are, which were caused by COVID-19," he told a Senate estimates hearing.

When asked if anything could have been done differently to prevent the aged care outbreaks, Senator Colbeck pointed the finger at the Victoria's handling of the pandemic.

In Australia, 2049 aged care residents have contracted COVID-19. Victoria accounted for the bulk of cases, with 1986 aged care resident infections, followed by NSW with 61 cases, and one each in Queensland and Tasmania.

The failures in aged care have been the subject of a fierce political stoush, with Victorian Premier Daniel Andrews emphasising the federal government's role in funding aged care and regulating standards, while Canberra has pointed the finger at Victorian health authorities.

Senator Colbeck told Tuesday's hearing 2194 aged care staff in Victoria had contracted the virus and all but three had since recovered.

Greens senator Rachel Siewert questioned Senator Colbeck about his assertion that aged care workers brought the infections to work, given that the majority caught the virus while on the job.

"It might have been one or two staffers who brought the virus in," he said. "Not only have they infected residents but they [then] infected some of their co-workers."