Pregnant Meghan Markle has worn 21 dresses, 14 pairs of shoes – and its only day 12! ALEXANDRA SHULMAN on the royal bump’s £500,000 fashion show

A 16-day tour of Australasia, requiring frequent changes of clothes, public appearances and formal dinners would not be any pregnant woman’s dream scenario. But if one thing has been made clear during Harry and Meghan’s first overseas Royal tour together, it is that she is really proud of her pregnancy.

It’s likely she is at least 15-weeks pregnant. Still early days for a yoga-fit, body-conscious, incredibly slim woman like Meghan. Many expectant mothers do their best to disguise the changes taking place in their body for as long as possible, but not the Duchess of Sussex.

Instead, if she hasn’t been wearing a loose dress or draped coat drawing attention to the possibility of a scarcely swelling stomach beneath, she has had her hands placed gently over it. 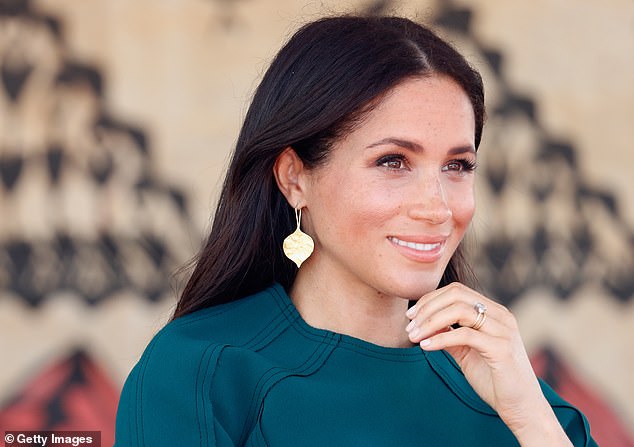 A 16-day tour of Australasia, requiring frequent changes of clothes, public appearances and formal dinners would not be any pregnant woman’s dream scenario 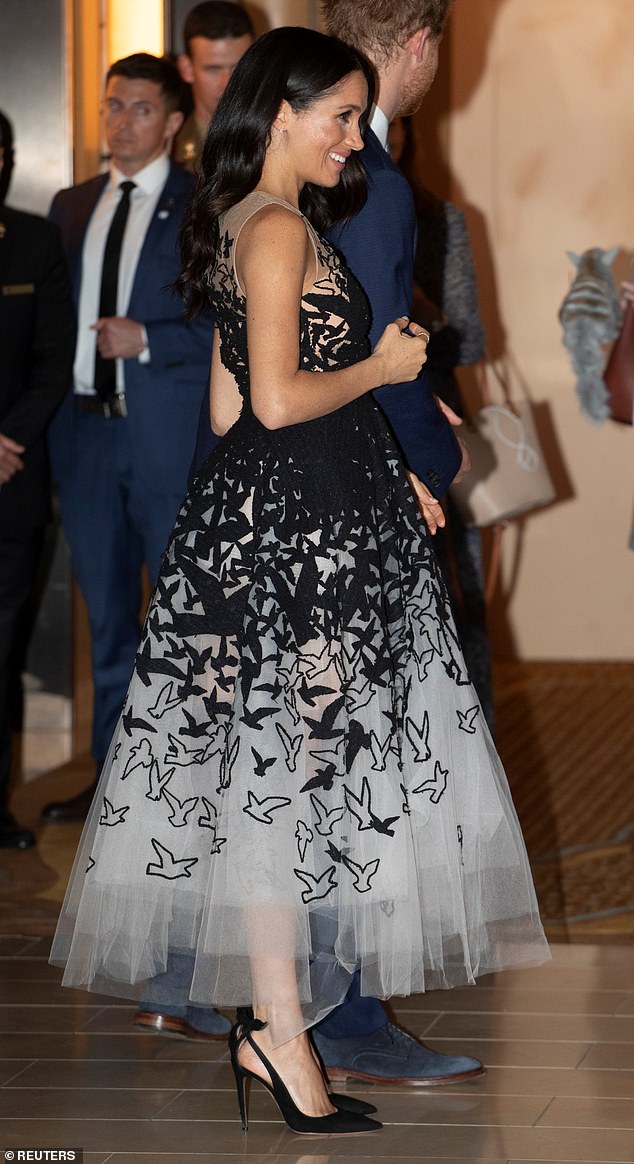 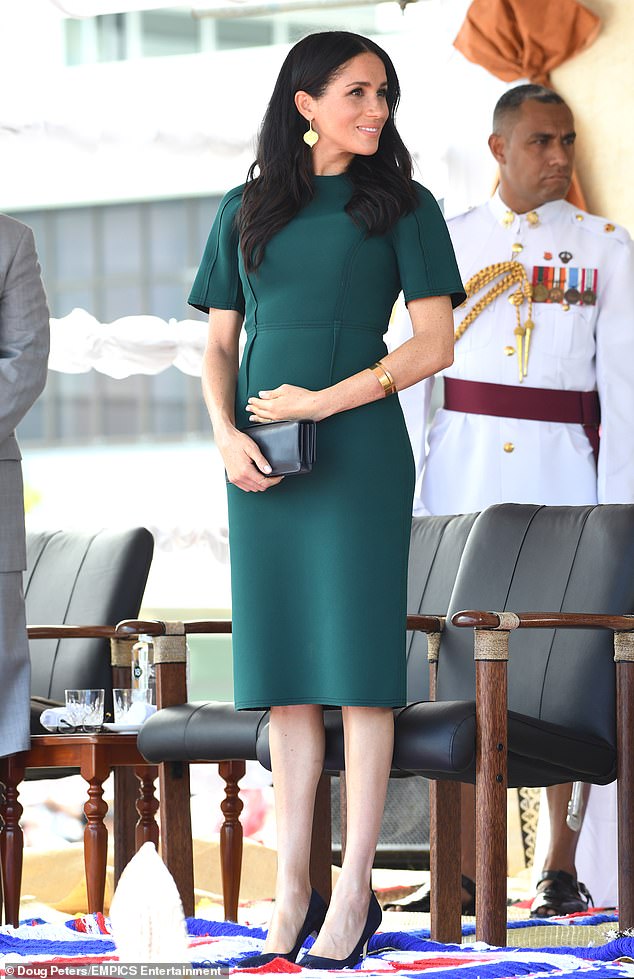 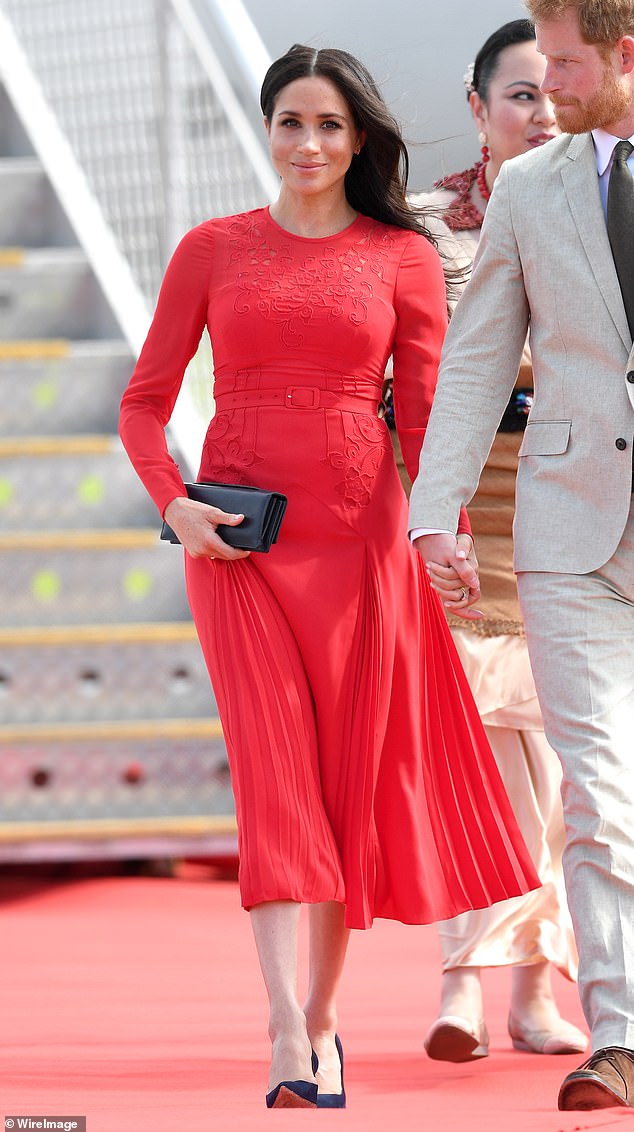 Since Royal tour wardrobes are put together with as much planning as the D-Day landings, it is likely that much of the preparation would have taken place before the Duchess knew she was pregnant. And I suspect quite a chunk had to be rapidly ditched and re-thought to adjust to the new circumstances.

The team in her office and no doubt her tour companion and friend Jessica Mulroney, who was spotted out in Australia last week, will have taken great care putting together a wardrobe knowing that every appearance would be interpreted as sending a message, every necklace and clutch bag signalling as clearly as if they spoke.

And it’s a major task: by yesterday, day 12 of the tour, Meghan had worn 21 different dresses and 14 pairs of shoes. So far her tour wardrobe is estimated to have cost £46,754 – not including her jewellery. 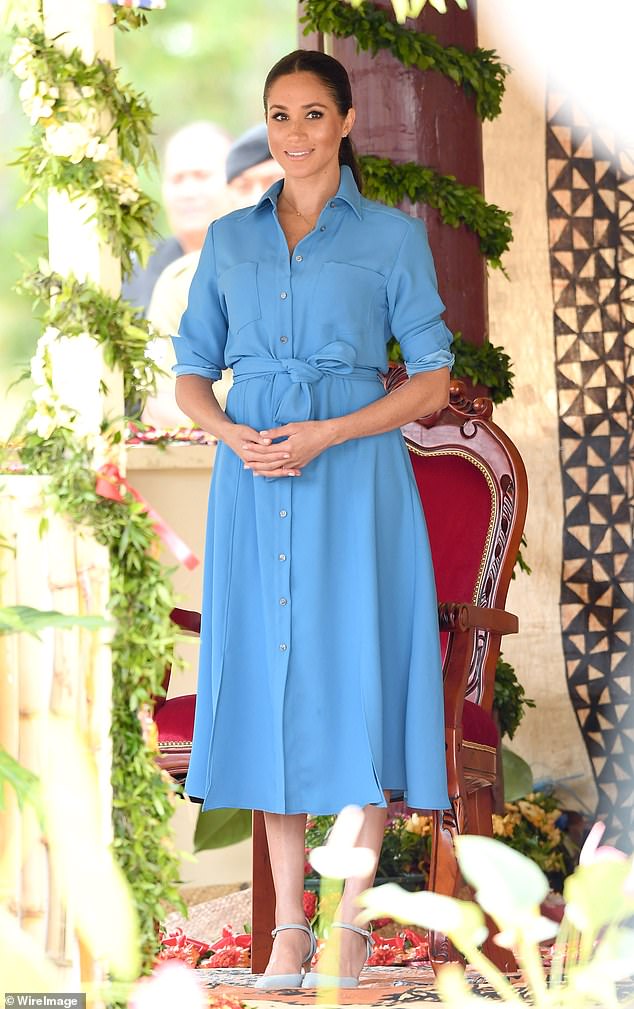 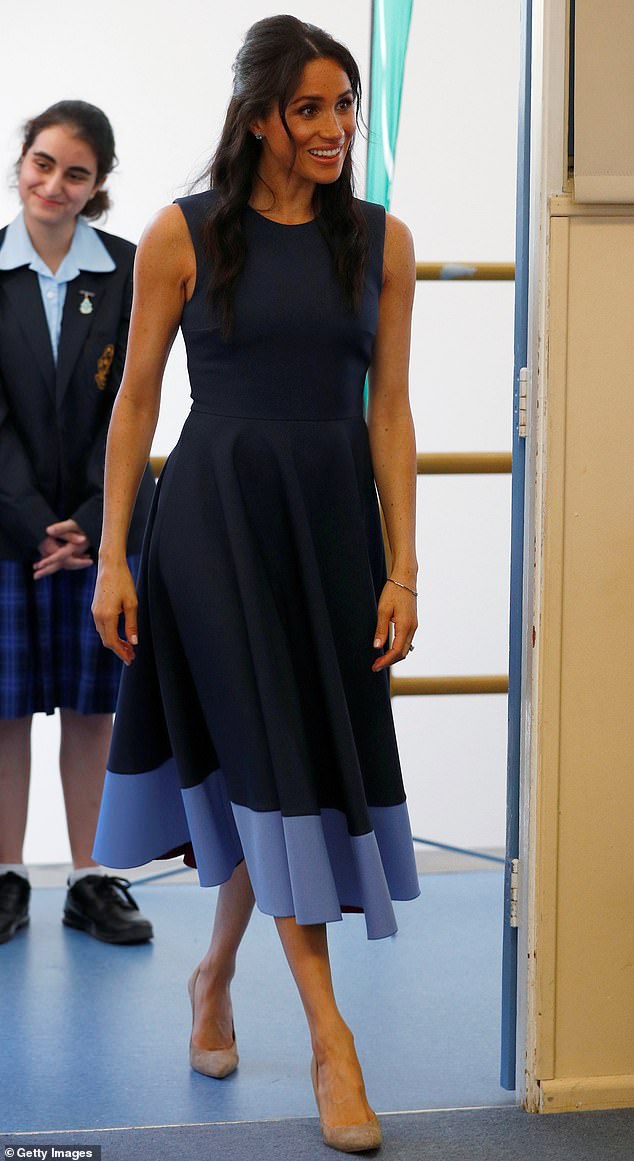 The first step will have been to scour the fashion world for Australasian designers to wear, (Emilia Wickstead and Martin Grant your time has come), put together mood-boards of traditional motifs (come in native flora and fauna), and, if Meghan wasn’t previously hot on the colours of the various national flags, no doubt she will be able to do a Mastermind on them now.

Traditionally the Royal Family is keen to throw in a large number of symbolic nods to their host country, but Meghan seems largely to have stuck to her usual sober palette and lack of embellishment, with the exception of a brilliant Fijian blue Safiyaa gown for that country’s state dinner.

The Family usually would also take the opportunity to spotlight British fashion, but apart from a Roksanda dress to visit the Macarthur Girls School and two Brits, Stella McCartney and Antonio Berardi, at the opening and closing of the Invictus Games, Meghan has chosen not to do this. Instead she used the tour to broadcast her interest in female opportunity and environmental issues. 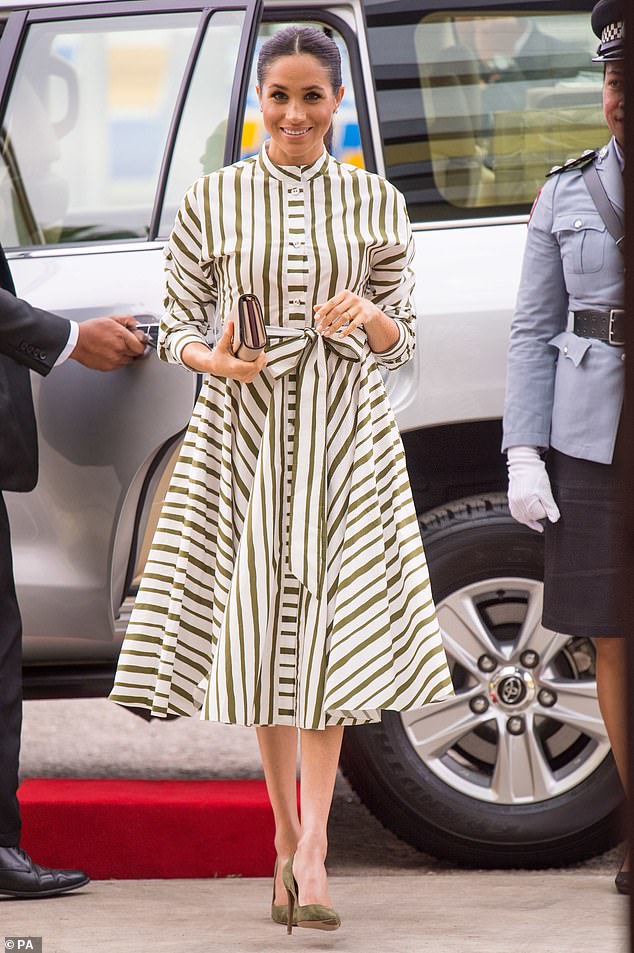 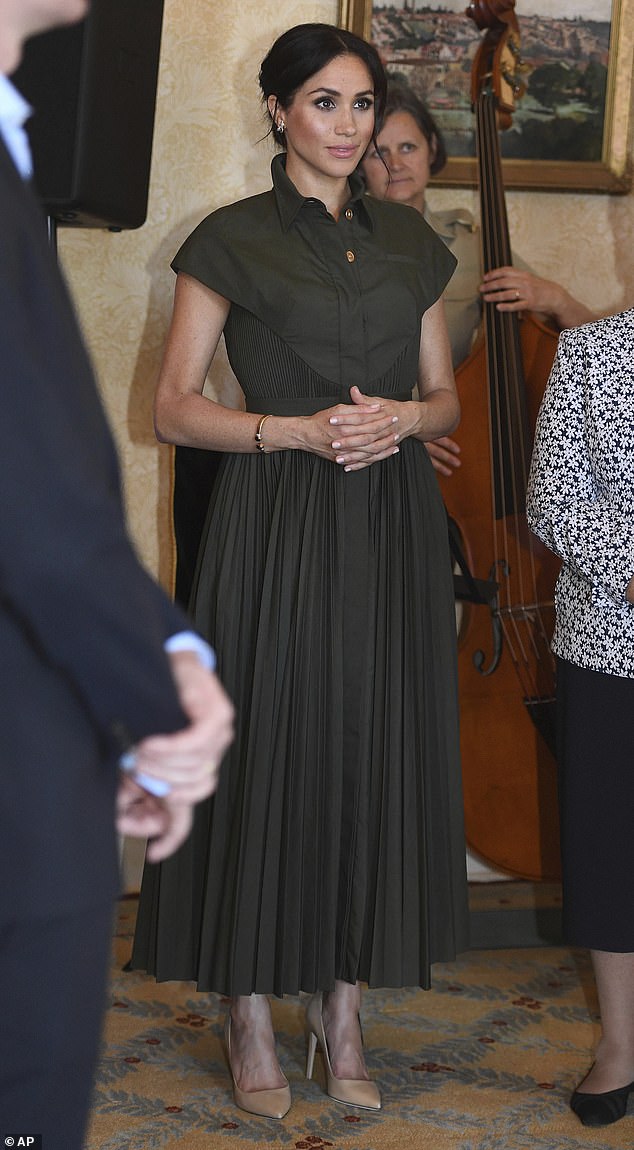 The Rothy flat pumps she slipped into, replacing her usual vertiginous heels, are made from recycled water bottles, her Outland Denim skinny jeans are made in an Australian factory employing survivors of Cambodian trafficking, and that Fijiian blue dress was made by Safiyaa London — a brand founded as a female equivalent to the men’s tailoring mecca of Savile Row.

At 37, she is a woman who knows what she likes to wear and she’s not about to change her style for either pregnancy or dinners of chargrilled kangaroo.

Generally, she has stuck to the usual pillars of her wardrobe. Although she’s tiny, Meghan has already demonstrated herself to be a fan of the big coat, (remember the white coat she wore for her first post-engagement TV interview outside Kensington Palace). 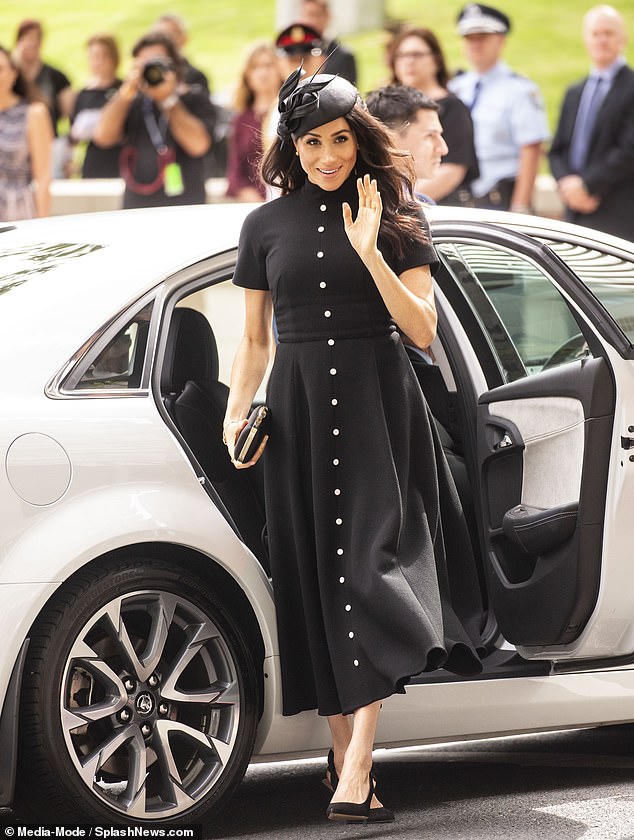 She goes for calf-length, collared wraps and classic trenches like the Martin Grant she has worn for several appearances on this tour.

But while the traditional Royal approach is to employ coats as a suit of armour – close fitting, tightly buttoned and unlikely to engage in unsightly flapping – she wears hers as loose cover-ups, easy to slip on and off; almost security blankets.

She also loves a stripe, as shown in the voluminous Martin Grant maxi she wore to sit barefoot on Bondi Beach and the same designer’s lovely green and white dress for her meeting with the Tongan Prime Minister. 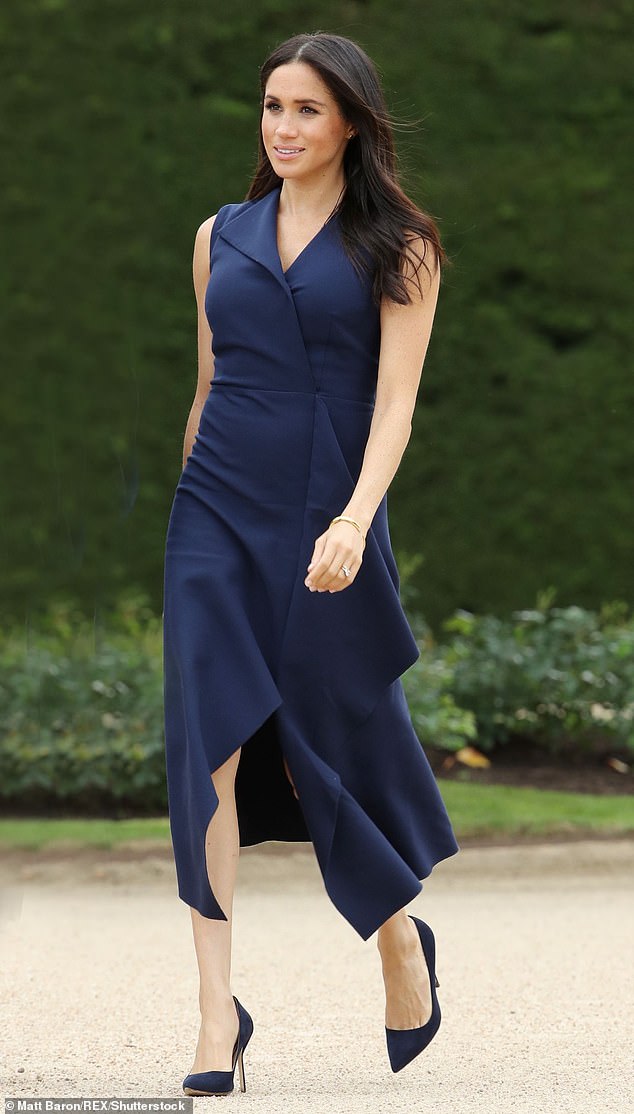 There was also the diaphanous Reformation number she wore for a walkabout on Fiji’s Kingfisher Bay, her first appearance after admitting to needing to take time off to rest. Interestingly, that dress, with its side split, bare shoulders and skinny straps, and her leather gladiator sandals, was a much more girlish look than her usual streamlined Alpha-woman style. It gave her a rare vulnerability.

In keeping with her determination to be her own woman rather than viewed as a wifely mannequin, there have been glimpses of Meghan in dress-down mode, although no appearance on a Royal tour is truly off-duty.

She built in a welcome high street element with the burgundy polka dot dress by & Other Stories that shared the same cap sleeves of much of her evening wear, and the skinny jeans, while the oversized shirts we associate with the early days of her romance with Prince Harry have not been completely banished.

Ultimately though, nobody wants her to look like a workaday version of the rest of us. The Duchess of Sussex is a Royal ambassador. We want her to be glamorous, sensitive, stylish, warm, contemporary and a little bit regal. I don’t think there’s anyone who could say she failed. 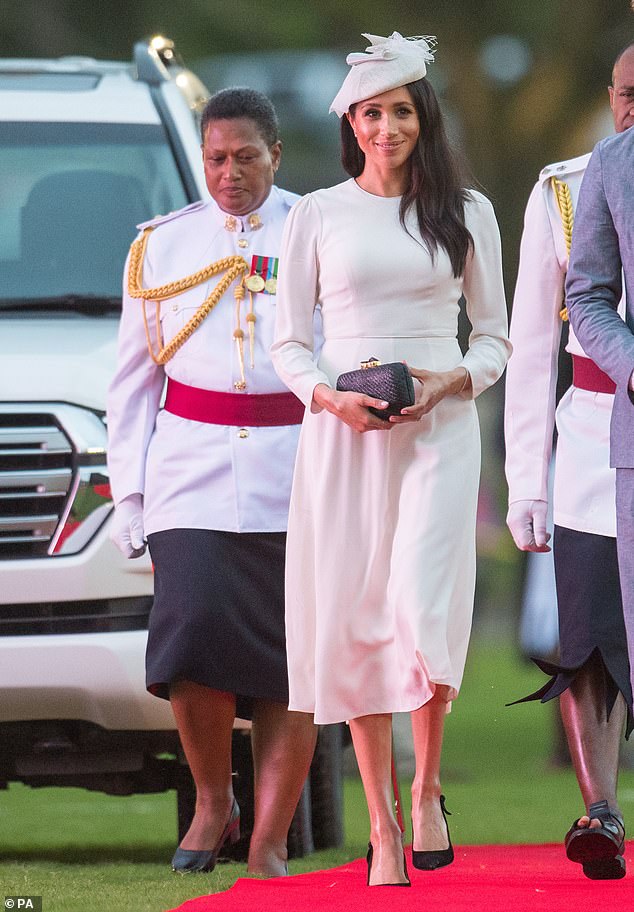 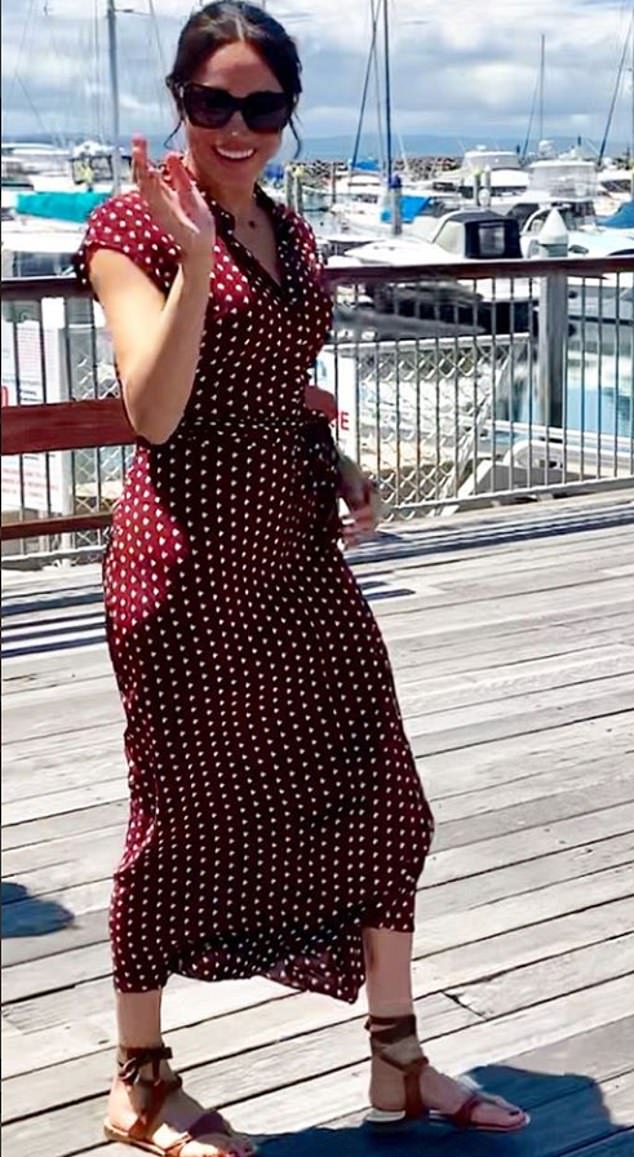