If you’ve found yourself in a breakfast rut where you eat the same thing every day, I have good news that might help you get out of your boring old routine. Cereal and snack brand Post’s Chicken & Waffles and Maple Bacon Donuts flavored cereals are coming to completely change your breakfast game and brighten up your mornings. Who doesn’t love chicken, waffles, maple, or bacon? Add those things to a bowl of breakfast cereal and you seriously can’t go wrong.

You may have seen some rumblings about the news of these unique flavors on Instagram food accounts lately, and a pos by the Instagram account @canadiancandyhunters on Jan. 16 shared a pic of the Chicken & Waffles flavored cereal box which not only revealed that this breakfast concoction was on shelves in stores in Canada (and likely coming to U.S. stores), but it also gave curious onlookers a little description of the breakfast food found on the back of the box. The blurb on the back says, per the photo:

Well, on Monday, Feb. 11, Walmart finally let the cat out of the bag (er, the chicken out of the box) when the store announced that the rumblings of the sweet and savory cereal are true. In fact, according to Walmart, you can snag a box at your local store on National Cereal Day on March 7, 2019. Walmart also tells Elite Daily in an email that both varieties of the Honey Brunches of Oats — Chicken & Waffles and Maple Bacon Donut — will only be available for a limited time. Per the store, "once it’s gone, it’s gone." 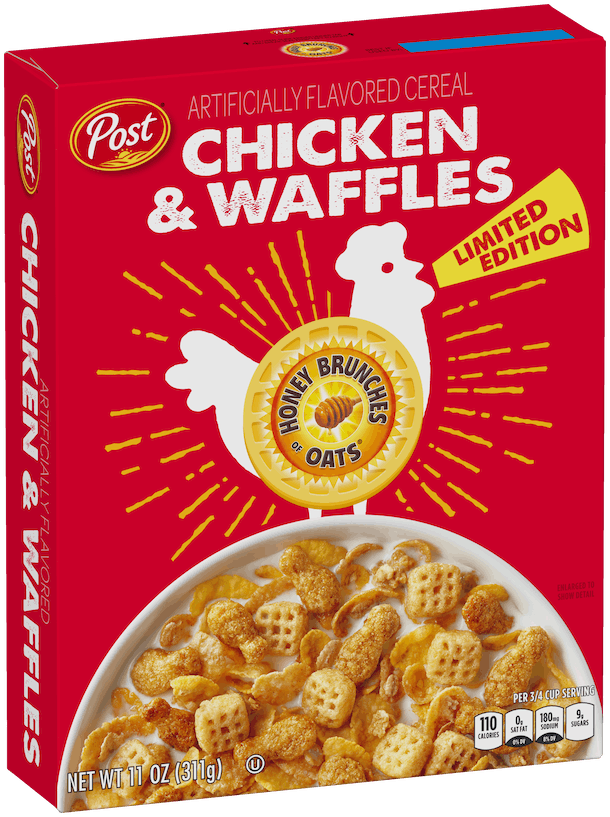 OK, I don’t know about you, but I think my National Cereal Day plans will definitely include a stop at Walmart this year.

According to food website Chew Boom, the Chicken & Waffles flavored cereal features cereal in the shape of mini chicken drumsticks and waffles, and the Maple Bacon Donuts flavored cereal comes with ring donut cereal shapes paired with wavy oat cereal flakes. The limited-edition cereals will be available at nearly 2,000 Walmart locations nationwide starting on March 7 for $2.98 per box. 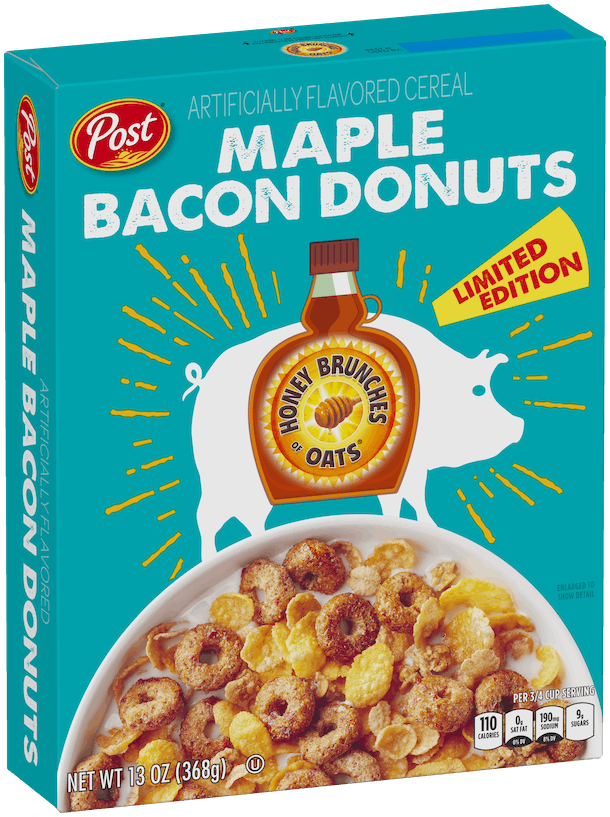 If you think Post’s Chicken & Waffles and Maple Bacon Donuts flavored cereals are out of this world, recall some of their even more ambitious combinations. At the end of December 2018, stores started stocking up on Post’s Sour Patch Kids cereal, described on the Post website as "your favorite candy is coming to life in your cereal bowl." Post also teamed up with Hostess for Honey Bun cereal and Donettes cereal. In a press release from January 2019, the brand described the sweet treats that would come from the partnership and shared:

In fact, Post has an entire line of "Dream Cereals," featuring cereal and snack combos like Oreo O’s, Golden Oreo O’s, Chip’s Ahoy, S’mores, Nutter Butter, Nilla Banana Pudding. According to the Dream Cereals website, the flavors "are blurring the line between fantasy and reality." If you’re a fan of combining your favorite snacks with your favorite meal of the day, Post cereals might be just the thing for you.

Whether you eat Post’s Chicken & Waffles flavored cereal with milk or maple syrup or enjoy the Maple Bacon Donuts flavored cereal as breakfast or dessert, make sure you stock up on these creative concoctions before supplies run out after their March 7 release. Happy eating!