Pink’s latest album is a who’s who of pop and rock royalty.

“Opportunities kept coming up for me to work with all these incredible people, and I think that’s what this record is all about: the village it took to create it,” says Pink, who is still touring in support of her last album, 2017’s “Beautiful Trauma.” “I thought maybe I’d just put out an EP for the fans, but then it started steamrolling into this whole new project.” 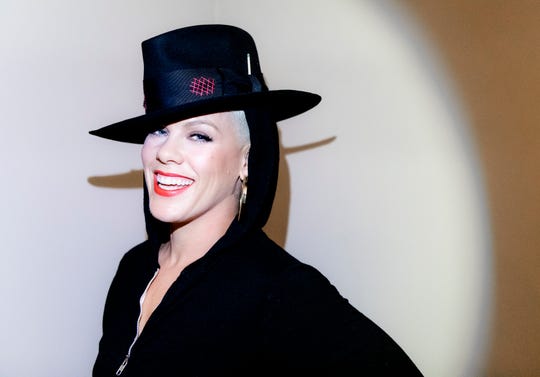 But even with more cooks in the kitchen, Pink, 39, hasn’t lost her knack for raw, vulnerable anthems about relationships and self-empowerment. In fact, “Hurts 2B Human” might feature some of her most personal songs to date. “Circle Game,” named for Joni Mitchell’s 1970 ballad, is a tribute to her father, Jim Moore, who is in remission from cancer.

Pink opens up about therapy, miscarriage at 17: ‘You feel like your body is broken’

“I’m at that age where a lot of my friends are losing their parents and it’s a really painful thing to go through,” Pink says. “(The song) is about growing up and still feeling like that little girl, waiting for my dad to fix my problems and realizing that’s not the way it is anymore. And now that I have children, it just changes when you look at your kids. I’m like, ‘Wow, I’m your person.’ There’s a beautiful weight in that that just makes you reflect.”

Her dad also partly inspired “Can We Pretend,” which bemoans getting older and imagines a world without – among other things – President Donald Trump. (“Can we pretend that we both like the president?” she sings in the chorus.)

“I think he’s a joke,” Pink says. “I think it’s also a joke how divided we’ve all become, and he’s been a catalyst for division. Look, I was raised by a Vietnam vet, Air Force person who had me marching on Washington since I was three years old. I believe in patriotism being that you defend your ideals. We have one of the worst leaders that this country has ever had, so you have to speak out about it.”

She’s not content to stay in her lane, either.

“People say, ‘You should just shut up and sing,'” she says. “But it’s like, what do you do? Are you in politics? Why does your opinion matter more than mine? I’m a citizen of the United States, and I will continue to speak out until I’m in my next lifetime as a puppy. Yes, I would like to come back as my dog.”

The singer (real name: Alecia Moore) is optimistic about the next generation, which includes her and husband Carey Hart’s two young kids Willow Sage, 7, and Jameson Moon, 2. She recalls feeling particularly inspired by her daughter on a recent trip to Berlin, where the family visited the city’s Holocaust memorial.

More: Why Pink is done sharing kids on social media

“She likes that the city is really green and beautiful with lots of parks, and the idea that once was bad is good again,” Pink says. “That’s what she said.” 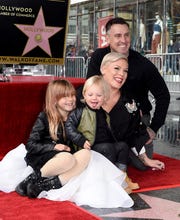 As their kids have gotten older, she’s started to see more of her and Hart’s personalities shine through their children.

“Willow has Carey’s sense of humor but my attitude and intensity, so that’s going to be interesting,” Pink says with a laugh. “Jameson is a ham sandwich, man. He’s a performer – he’s going to be a stand-up comedian. So he’s definitely got my loopiness.”

While promoting “Beautiful Trauma” in 2017, Pink said that she and Hart are done having kids, although they may consider adoption.

“Our hands are pretty full right now, but I’m still completely open to that,” she says. “That’s what I want – I’ve gotta get him on board. I keep telling him I want a baby and he keeps building me motorcycles.”