People reveal their December 25 HORROR stories – from listening to mother-in-law read out every single Christmas card, to having beans on toast for dinner

Burning the turkey and waking up with a hangover may class as a bad Christmas for some, but that’s nothing compared to these horror stories from December 25.

In a bid to raise a smile across the nation during such a challenging time, people from across the globe have taken to Mumsnet to reveal their very worst festive tales from across the years – ranging from feeling unwell to not having the traditional turkey dinner with all of the trimmings.

Among the other shocking revelations include having beans on toast for dinner and witnessing their very drunk mother washing up wearing the sprout pot on her head.

Elsewhere, one person recalled the time they had to sit in silence and listen to their mother-in-law read out every single one of her Christmas cards. 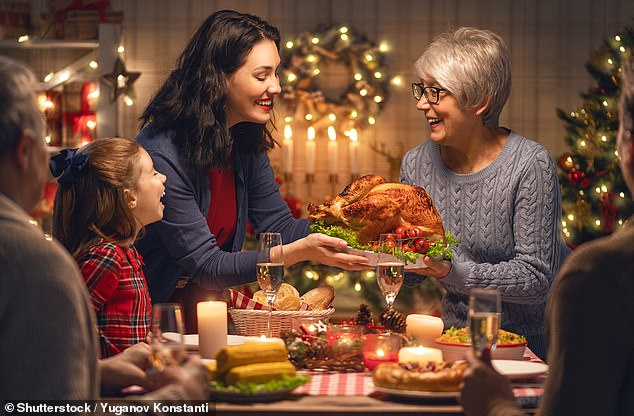 People from across the globe have taken to Mumsnet to reveal their shocking festive revelations. Pictured, stock image

In the initial post, the person asked for people to explain their worst family Christmas tales from hell (pictured)

In the initial post, one person penned: ‘Please tell me about your worst family Christmas from hell. Hopefully that will make me happier about it just being a v small Christmas this year and would love to hear your experiences.’

And it wasn’t long before the comments section was inundated with disastrous tales from the festive season.

‘Went abroad to see family. Had the smallest breakfast ever and then they didn’t serve Christmas dinner until 10pm. I was STARVING!!’ wrote one. ‘Not the worst compared to those who were ill over it, but it was one to remember. Never been repeated!’

A second who had a very similar Christmas day recalled: ‘We all had flu and the Christmas dinner that year was beans on toast.

‘The actual Christmas dinner got frozen for a few weeks later when we were all feeling better. And yes, we even had the crackers with it.’

Another popular theme among the replies seemed to blame the parents for ruining the festive day.

‘Went with DH to visit his parents for the afternoon, wrote one. ‘We all sat in silence in the living room as MIL read out each and everyone of her Christmas cards from a large pile on her lap.

She read out the dear x and x, the printed card message and anything they had written. It went on for ages!!’

A second recalled the time she was 14 and her mother got so drunk, she did the washing up wearing the sprout pot on her head.

She added: ‘(which sounds kind of funny but REALLY wasn’t), telling us all horribly bitterly how pointless Christmas was without small kids.

As terrible Christmas’ go, it certainly wasn’t the worst, but it was spectacularly uncomfortable.’

A third penned: ‘My FIL decided he’d carry our very large and heavy cooked turkey in its roasting tin by tucking a carving knife and sharpener under the handles of the tin at either end.

‘Funnily enough, the tin did a perfect 180 degree rotation and tipped the turkey and all the cooking fat all over my kitchen floor. Just as my other guests arrived.’

Meanwhile, one person remembered back to where they were six-years-old and played Mary in the school nativity play.

‘I had a little belly and was panic stricken that I was going to give birth to Jesus on Christmas day,’ she explained. ‘I went to bed on Christmas Eve with several pairs of knickers on (had an older sister so knew how babies are born) and was so scared I was going to give birth I thought the baby wouldn’t be able to get out with the extra knickers.

‘The next day my parents noticed I wasn’t my normal happy self on this special day. I finally told them what I thought was about to happen and they reassured me I wasn’t the real Mary and mother of Jesus.’

Elsewhere, another recalled the time they were aged 19 and her boyfriend found and ready her diary – where she said she fancied someone else.

‘Obviously never expected him to read it but was pretty s**t of me. We were living with my mum at the time and it was the most awkward Christmas dinner ever,’ she added.

‘My mum put a lovely stocking out for him. He lived it but the next night slightly less enthusiastic that all the chocolate coins had little teeth marks where the mice had been overnight.

‘It was literally like being in a Dickens novel. I was used to it but must of been misery for him.’