Olivia Hooker, who after surviving a race-related attack on a black section of Tulsa, Okla., in 1921 went on to become the first black woman to enlist in the Coast Guard and a distinguished psychology professor at Fordham University, died on Wednesday at her home in White Plains, N.Y. She was 103.

On behalf of the men and women of the #USCG, we extend our sincere condolences to the family of Dr. Olivia Hooker, who passed away today at 103. In 1945, she was the first African-American female to enlist in the #USCG. Read more about Dr. Hooker's life: https://t.co/akF1GEGE4y https://t.co/5G9vwbc0Cy

Dr. Hooker was 6 when white mobs stormed through the Greenwood District of Tulsa, destroying homes and businesses in a wave of violence often labeled the Tulsa race riot, although that term has fallen into disfavor among many. Dr. Hooker, in an oral history recorded in 2015 for the White Plains Public Library, instead called it “the terrible catastrophe in Tulsa.”

“Other people call it the Tulsa riot,” she explained. “It really wasn’t a riot — we were the victims.”

The rampage was touched off by false rumors that a black teenager had assaulted a white woman. A state report compiled decades after the fact estimated that 100 to 300 people died. Dr. Hooker was thought to be among the last surviving witnesses to the attacks. 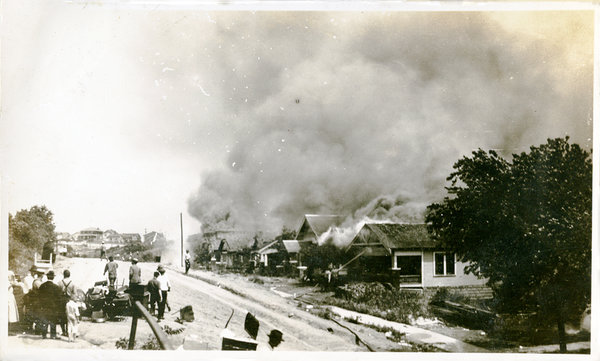 Olivia Juliette Hooker was born on Feb. 12, 1915, in Muskogee, Okla., to Samuel and Anita (Stigger) Hooker. She remembered that when the attacks started, she saw men with torches storming into the family’s backyard and her mother acting to protect her and her three siblings.

“Our mother put us under the table,” she recently told NPR. “She took the longest tablecloth she had to cover four children and told us not to say a word.”

The marauders entered the house and took an ax to the family piano. In the business district, her father’s clothing store was destroyed.

“I guess the most shocking thing was seeing people, to whom you had never done anything to irritate, who just took it upon themselves to destroy your property because they didn’t want you to have those things,” she said. “And they were teaching you a lesson. Those were all new ideas to me.”

After the destruction, her parents moved the family to Topeka, Kan., and later to Ohio. In 1937 Dr. Hooker received a bachelor’s degree at Ohio State University and became an elementary-school teacher.

With the international situation growing more ominous, she tried to enlist in the Navy but was rejected for reasons never made clear to her. Instead she tried the Coast Guard, which in 1942 had been authorized to create a women’s reserve unit that it called the Spars. (“Spar” is the first letter of the first word and the first three letters of the second word of the Coast Guard’s Latin motto, Semper Paratus, meaning “always ready”).

“The Coast Guard recruiter was just so welcoming,” she told Coast Guard Compass, the service’s official blog, in 2013. “She wanted to be the first one to enroll an African-American.”

She was accepted in 1945 and is generally identified as the Coast Guard’s first black woman, although she herself qualified the distinction.

She was assigned to the “separation center” in Boston, where she typed discharges and other paperwork. After World War II had ended and the women’s reserve was disbanding, she typed her own discharge papers, in 1946.

In 2015 the Coast Guard named a building at its Staten Island complex after her.

Dr. Hooker was on the Fordham faculty from 1963 to 1985. Her areas of expertise included people with developmental and intellectual disabilities. She helped found the American Psychological Association’s Division 33, which focuses on the needs of those populations.

Information about Dr. Hooker’s survivors was not immediately available.

In 2015, at age 100, Dr. Hooker was in the audience when President Barack Obama, giving the commencement address at the Coast Guard Academy in New London, Conn., singled her out.

“She has been a professor and mentor to her students,” Mr. Obama said, “a passionate advocate for Americans with disabilities, a psychologist counseling young children, a caregiver at the height of the AIDS epidemic, a tireless voice for justice and equality.”