A moving photo was taken minutes before the Notre Dame fire broke out.

The image captures a moment a dad swung a gleeful child in his arms in front of the historic monument.

Following the devastating blaze, the poignant picture has since gone viral.

Brooke Windsor captured the heartwarming moment as she took in the sights of Paris yesterday.

Clearly chuffed with the snap, the visitor resisted the urge to show her handiwork to the strangers.

It wasn’t until the Catholic Cathedral caught fire that the tourist decided to share the image.

She tweeted: “I took this photo as we were leaving #NotreDame about an hour before it caught on fire.

“I almost went up to the dad and asked if he wanted it.

“Twitter if you have any magic, help him find this.”

Brooke’s plea to find the man in the photo has since swept the web.

Many also took the time to leave a comment, with hundreds admitting the snap had moved them.

One commenter remarked: “So sad to see the building looking serene and safe in the sun.

“Just before this dreadful disaster.” 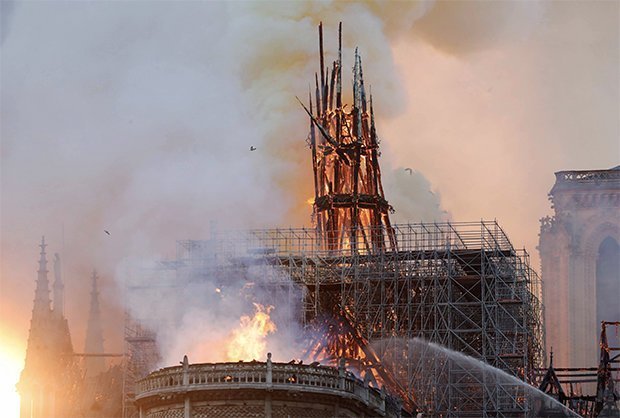 A second responder wrote: “Someday that little girl will create this beautiful picture with her own child in front of a freshly repaired Notre Dame Cathedral.”

Another said: “I hope Twitter does have some magic, that is a great picture.”

A third added: “This has easily become my favourite photograph of Notre Dame.

“I hope you find the father in the photo.”

As of yet, the father and daughter in the photo haven’t been located.

Firefighters have worked tirelessly to save Notre Dame cathedral.

As it stands, the structure has been spared from the flames and the fire hasn’t spread to the northern belfry.

The same can’t be said for the historic spire, which dramatically collapsed last night.

Currently, the cause of the fire has not been pinpointed.

He said: “Notre Dame is, our history, our imagination, where we’ve lived all our great moments.

“It is the epicentre of our lives.

“It’s a story of our births, of our paintings.

“It’s the cathedral of all of France even if they have never been.”