As a biology teacher, I always required my general biology students to make a plant collection. Why? I knew most of them would not continue as biology majors, so I figured I had one semester, sometimes two if they took Bio II, to increase their awareness – and thus their appreciation – for all life on Earth. I figured if they were out looking for native wildflowers and learned the names of a few of them they would care more about them, and hopefully think about the effects of our ever-expanding human population. Maybe they would even notice a few of them the following spring.

I always thought of that process as educating their eyeballs. I worked on educating their brains in the classroom and lab, but out in the field, and even on their own, I hoped they would get some eyeball education.

There are, of course, many wonderful things out there for our eyes to learn. One of my favorites was watching students see the Tetons for the first time.  Many of our students had never strayed far from highly-industrialized Baytown, Texas. For several summers we took students on a six -week trip throughout the west, culminating in a week in both Grand Teton and Yellowstone National Parks. They learned environmental science and plant taxonomy, took the same tests as our regular semester students, and never made anything less than a B. 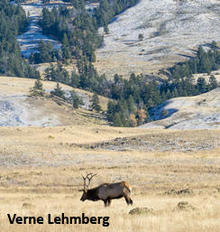 We never said a word as we drove north out of Jackson, Wyoming, just south of the Grand Tetons, waiting to round the final corner and have a full view of the mountains. Their reaction was always the same. There were immediate, enthusiastic requests to stop for photos, which often resulted in an inevitable snowball fight. These were people who were seeing both gorgeous mountains and snow for the first time! Their enthusiasm was wonderfully infectious, almost as if I were seeing those mountains for the first time myself – one of the many gifts they unknowingly gave their teacher.

The Tetons are extremely easy to notice and appreciate. Some natural wonders aren’t so obvious. When you look at this photo of a male elk bugling, what do you see? Stupid question, right? You see a magnificent animal calling to defend its territory from other males. But look behind him and you see a mountain with trees and a light dusting of snow. Notice where the trees are located? They don’t cover every inch of the mountain. Why not? The answer is microclimates, which lead to some major differences on mountainsides, even ones relatively close to each other. Ecologists know this as the North-South Slope Effect.

The location of a hill or mountain on Earth, and the direction the sun hits it, has a major effect on what vegetation, and thus animal life, can survive on that hill or mountain. The Tetons and the surrounding hills are close to a latitude of 45 degrees North, halfway between the equator and the North Pole. The sun’s rays hit the flat valley floor east of the Tetons at a 45-degree angle during the vernal and autumnal equinoxes. But what about the hillsides?

During the vernal or autumnal equinoxes, at a latitude of 45 degrees, a hill with a south-facing slope (as illustrated in the drawing below) receives the same amount of solar energy as flat ground in the Sahara Desert. The amount of sunlight hitting the north slope of the same hill would be similar to that at Point Barrow in northern Alaska. Two extremely different climates, normally thousands of miles apart, are now within a few feet of each other. 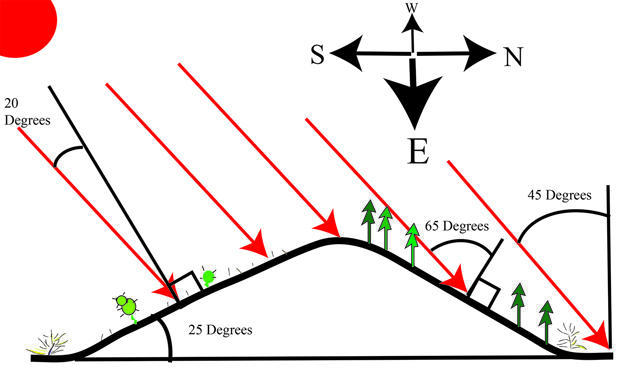 The size of the directional arrows indicate proximity. The viewer is closest to the east side and furthest from the west. Due to sun exposure, the south-facing slope, on the left, is much drier than the north-facing slope on the right.

The north-south slope effect is just one way plant and animal life vary from what would normally be expected in mountainous areas. Next time you travel through the mountains, look for it and experience the differences for yourself. Your eyes will learn something.