‘I ate myself into a frenzy’: Mother who was mistaken for being PREGNANT on her wedding day reveals how she shed 16kg in just five months by ditching soft drinks and giant meal portions

A mother whose weight spiralled after she was mistaken for being pregnant on her wedding day has dropped 16 kilos within five months just by tweaking her lifestyle.

Nandi Vitagliano, from Melbourne, lived off an unhealthy diet where she would eat five full meals and drink up to two litres of soft drinks per day.

The 32-year-old, who works in sales, tipped the scales at 78 kilos at her heaviest.

Her heavier weight made her feel so ‘horridly ashamed’ that she would avoid all mirrors, pictures and she struggled with trying on ‘bigger’ clothes in dressing rooms.

Determined to get on top of her weight once and for all, Nandi – who now looks unrecognisable – slimmed down to a size eight by simply ditching soft drinks and giant meal portions. 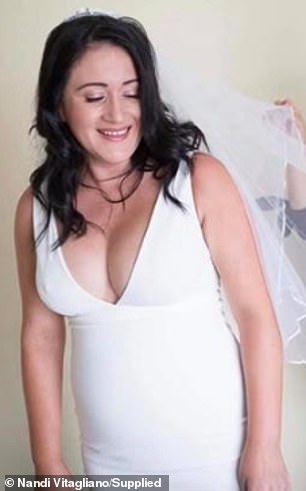 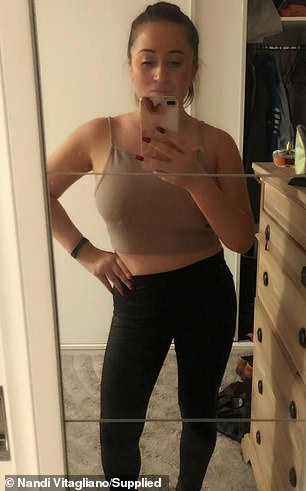 Nandi Vitagliano said her weight spiralled after she was mistaken for being pregnant on her wedding day (left: On her special day in early 2018). She went on to lose 16 kilos (right) 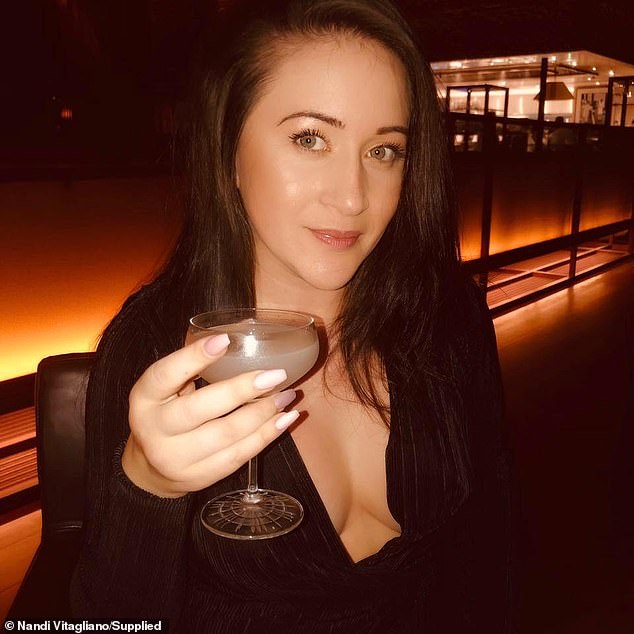 Determined to get on top of her weight once and for all, Nandi – who now looks unrecognisable – slimmed down to a size eight by simply exercising and eating smaller portions

Nandi’s healthy day on a plate

BREAKFAST: If not oats, I’ll make myself a smoothie with banana – or strawberries and raspberries, depending on what fruit is in season, flax seeds, almond milk, honey, and chia seeds. Sometimes, I’ll have some boiled, poached or scrambled eggs with Rye bread

LUNCH: Either tuna or chicken salad. I make it at home or if I’m at work once a week, I will spoil myself with a decent meal – but I mainly prep my meals or buy something at the gym that is pre-cooked and heat that up

DINNER: I normally cook. It’s all about portions. Enjoy what you like – within reason – but just in smaller portions. Sometimes, I make hamburger patties and it is much healthier and enjoyable

Before her weight loss, Nandi said she hadn’t realise how much she’d gain until her wedding guests thought she was expecting another baby in early 2018.

‘At my wedding, I was so embarrassed when the guests started asking me if I was pregnant. My downhill spiral came from there. I ate myself into a frenzy,’ she told Daily Mail Australia.

As her weight continued to pile on, Nandi – who documents her journey on Instagram – said she found herself overeating to cope with her emotions.

‘I was an emotional eater so if anything got hard for me in any way I would just eat my heart out,’ she said.

‘I was also working so much, I found myself eating a lot of takeaway as the easy way out. So getting meals at drive-thru or pickups were easy and accessible – and at times, the cheapest option to feed a family of five.

‘I ate five full meals a day and every time my body craved something I had to have it. My lack of exercise and unhealthy eating habits made me gain so much weight.

Every day, she would look in the mirror and be unhappy with what she saw.

‘For months I was hurting from even looking at myself in the mirror. I was horridly ashamed of how big,’ she said.

‘It lowered my self-esteem even more when I had to go shopping to get bigger size clothing. Going from a size eight to a 12 was a big adjustment for me.

‘On days I couldn’t cope, I would pop out for a drive and find myself grabbing that large cheeseburger meal with a chocolate sundae from McDonald’s.’

As her weight fluctuated, she tried going on diets – but nothing seemed to work.

‘I have tried crash diets and starving myself but it never worked because I loved food too much,’ Nandi said. 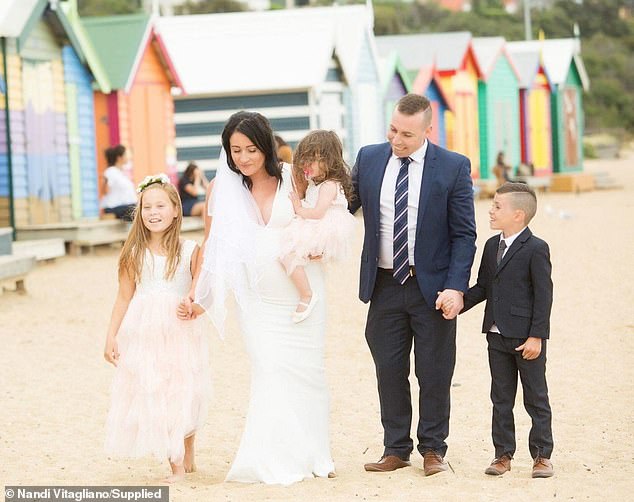 Her turning point came after she was left in tears when she saw a picture of herself taken unexpectedly on Christmas Day in 2018.

‘My turning point was mainly my health and an innocent photo my sister took of me at Christmas because of my reaction at something my brother did,’ she said.

‘I cried for hours after I saw that photo. That photo along with my children and my need to give them a better life and a better example of what goes into our bodies.

‘I never really set myself an unrealistic goal. My goal was to just lose some weight and wow did it change my life.’

And so in January this year, she dropped eight kilos within three months just by walking and eating smaller portions. 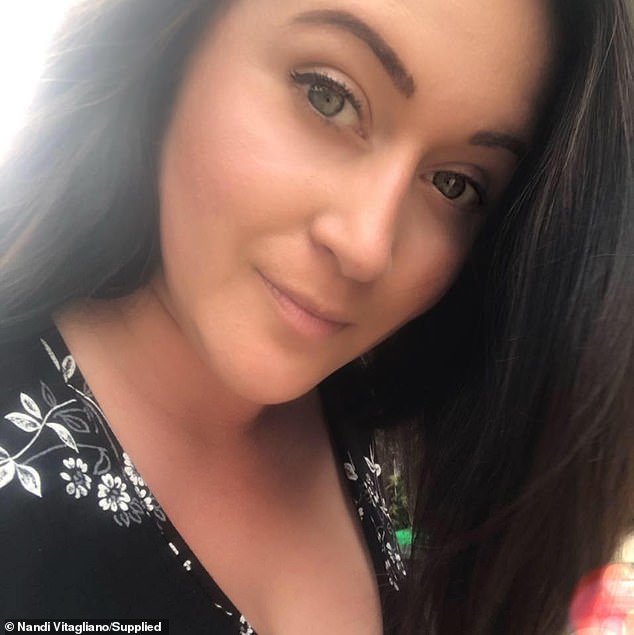 She lost a further seven kilos in two months after she signed up to Sweat with Kayla Itsines – a health and fitness workout app.

‘I fluctuate now between the extra kilo or two which is fine by me because I’m happier and healthier than ever,’ she said.

‘I stopped drinking soft drinks and don’t have them in my house anymore. I started cooking at home more often. Naturally we have days where I can’t be bothered cooking but I always take the time to give my family a healthy balanced diet now.

‘I still have my weaknesses which include anything with caramel in it like doughnuts especially – but instead of having half a dozen, I will enjoy just one on a weekly basis.

‘I couldn’t love myself when I looked in the mirror but now I love who I have become and the life and example I have chosen to live for my children.

‘I’m not embarrassed to leave the house and stay at my sons cricket match because I’m not worried about me not being able to catch my breath just talking to people.

‘I’m now a healthier version of myself.’ 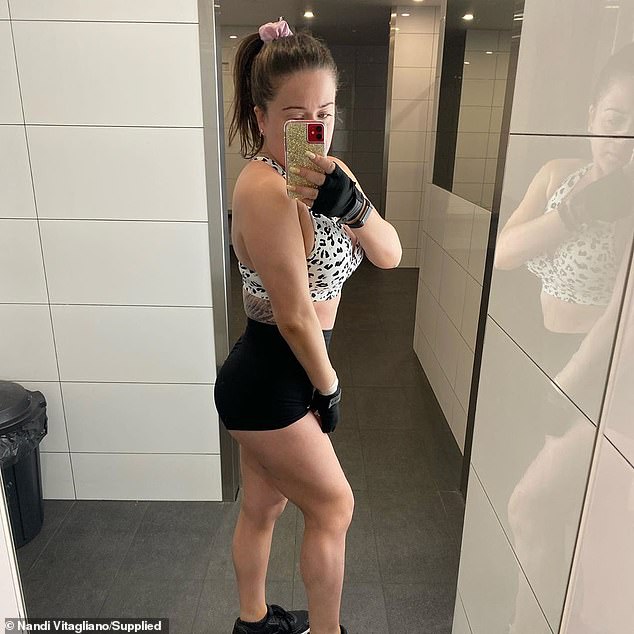 For anyone who’s keen to lose weight, Nandi – who now weighs a healthy 62 kilos – said: ‘My advice to anyone wanting to make the change – it starts with you’

As she maintains a healthy diet, Nandi said she exercises up to seven days a week.

‘I will take the odd day off but I have made it a part of my life and my routine that I feel guilty if I don’t,’ she said.

‘I appreciate the hour in the morning while my husband is home with the kids and they’re sleeping or when they are in bed late at night because I value it as mum time.

‘I love my kids but let’s face it, all mums need mummy time. I have also learnt to be in tune with my body so when it’s too much and my body says enough, I will rest rather than give up.

‘I’m a very lucky woman who has such an amazing and supportive husband who has helped me and held my hand throughout this journey and my children for cheering me on when times got a bit tough.

‘There’s nothing more important than a family who supports you because if they don’t, it makes your journey a hell of a lot harder.’ 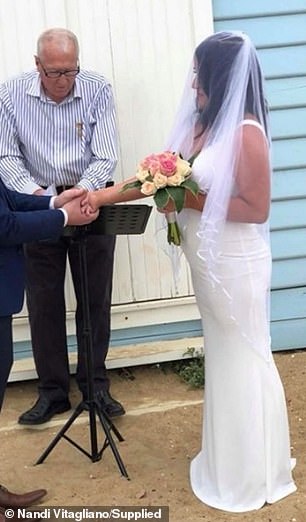 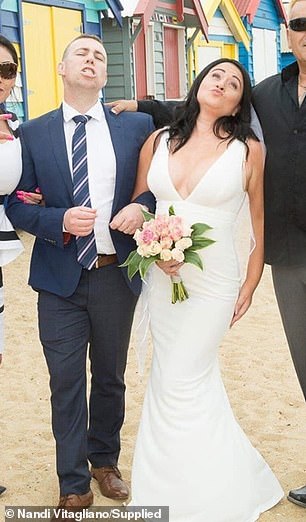 As her weight continued to pile on, Nandi said she found herself overeating to cope with her emotions after her wedding guests thought she was pregnant on her special day

For anyone who’s keen to lose weight, Nandi – who now weighs a healthy 62 kilos – said: ‘My advice to anyone wanting to make the change – it starts with you.

‘Only you can set yourself the task of making that change. No one else can.

‘You make time for the things that are important to you. I don’t have the time unless I make it. That includes cooking and doing my exercise. I have made the decision for the change in my life.

‘No one can force you to change your life or make that decision for you. When it gets tough and you feel like you can’t anymore, it’s ok to rest.

‘Consistency is key. We all have bad days but don’t let that deter you from your goal. Be who you are happy with, not what people expect from you.

‘Set yourself a realistic goal and aim towards it but please don’t give up.’